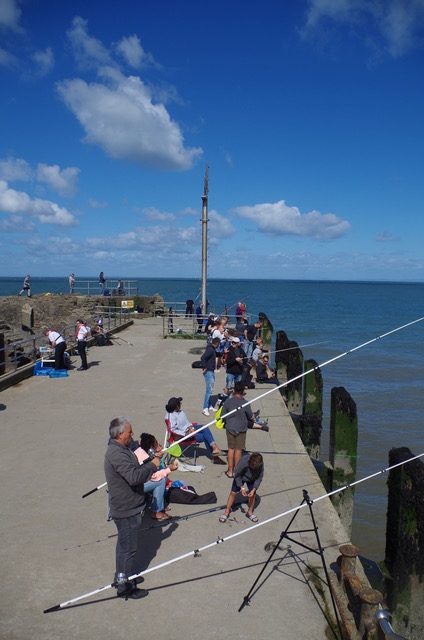 Combe Martin SAC’s Annual Fun Fish at Ilfracombe Pier has become a popular event within the Sea Ilfracombe Maritime Festival and this year was no exception with thirty fun fishers taking part.

Once again the weather played its part in the success of the event with warm sunshine throughout. A moderate North West breeze was fortunately at the participants backs helping the lines to blow away from the pier’s structure with a good drop to the water on one of the lowest tides of the year.

This is as it says on the box a fun fishing event with minimal rules. The competitive element is based on catching the most species with the top prizes in the points section reserved for under 18’s with adults picking up the remaining prizes. There are also prizes for the longest fish and heaviest fish. The main reward for those taking part is the social interaction and the broad beaming smiles on anglers faces.

Combe Martin SAC give thanks to High Street Tackle, Ilfracombe for their generous support of the event with an array of great prizes donated. Thanks also to Ilfracombe Aquarium who donated the family prize and engaged with participants in fish identification.

Our special guests on the day were Steve Dawe author of the book “Fishty Two weeks In A year”. A book that tells of Steve’s year long quest to catch as many species within twelve months as possible all in the cause of raising money for the stroke association.

Colin Wood and Alex Bond represented Ilfracombe Coastguard and mingled with the visiting public to talk about their valuable work as an emergency service co-ordinating rescues along the coast and beyond. Safety is of course top of their agenda with advice on good practice and safety aids readily available.

The fishing proved to be challenging at times with the water coloured due to the low tide and brisk NW wind leading up to the event. Plenty of fish were caught however with a very wide variety of species including a few rarities. Young Solly Welch enjoyed an exceptional day with a little help from mum, dad and grandad. Solly landed an incredible eight species including a rare Cornish clingfish, red mullet, dragonet, rock goby, ballan wrasse, corkwing wrasse, smelt and pouting. There was also a little drama when a pouting that had succumbed to his bait was seized by a conger eel that held tightly onto its prey before letting go when it saw the waiting landing net! 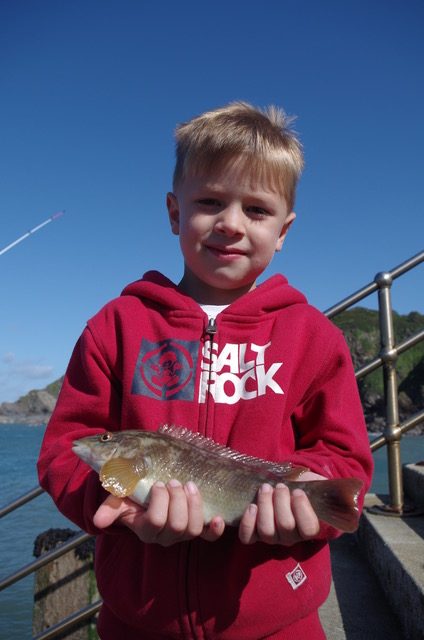 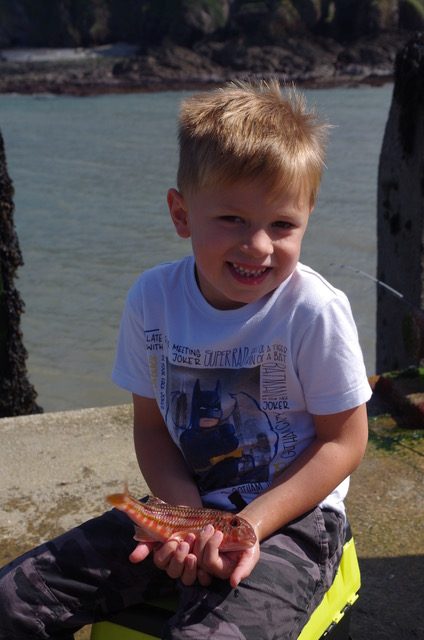 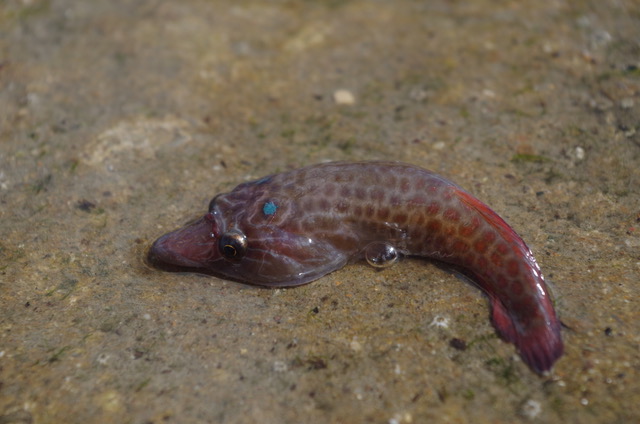 Several crustaceans were also landed including two lobsters and a good sized edible crab for Danny Watson. These were not eligible for prizes but I think there could be a prize introduced next year for the most exceptional non piscatorial catch. In the past there have been octopus caught and this year one angler lost contact with a substantial oar that battled gamely twisting and turning in the tide before coming adrift.

The Welch family were way ahead of the field amassing a grand total of 38 points to receive a family visit to the aquarium where they can visit the clingfish caught by young Solly and donated to the aquarium. 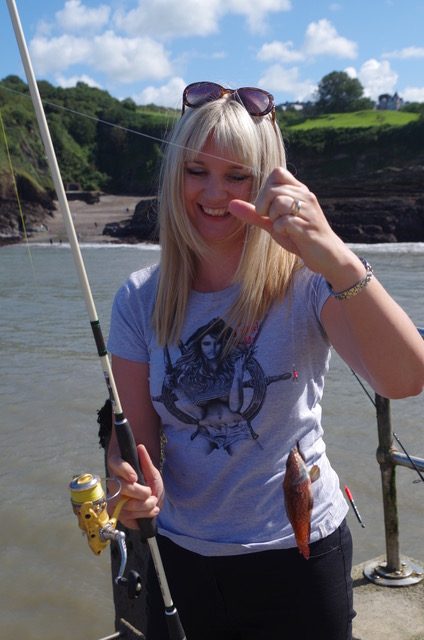 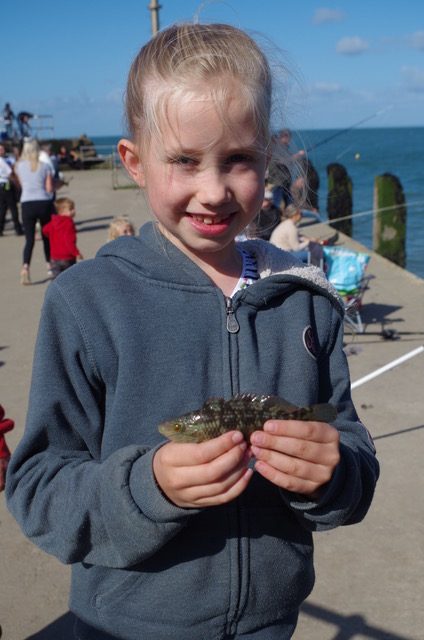 The longest fish was a 43cm garfish tempted by Matt Jeffery and the heaviest a ballan wrasse of 11oz to the rod of Matthew Dawe.

As part of Sea-Ilfracombe a big part of the event is the social interaction as members of the public wonder amongst the anglers to gaze at the catches and chat enjoying the ambience of the seaside and fun of the fishing. 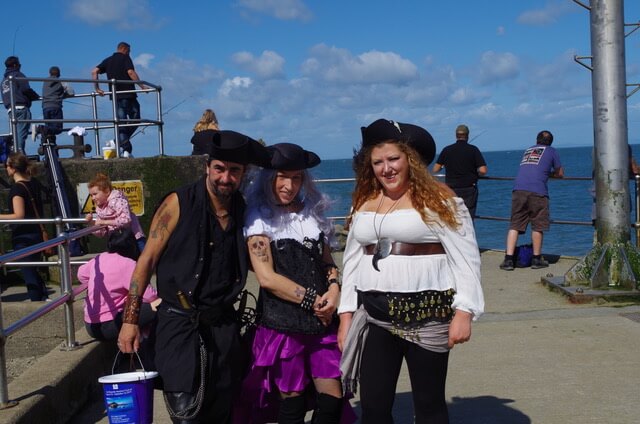 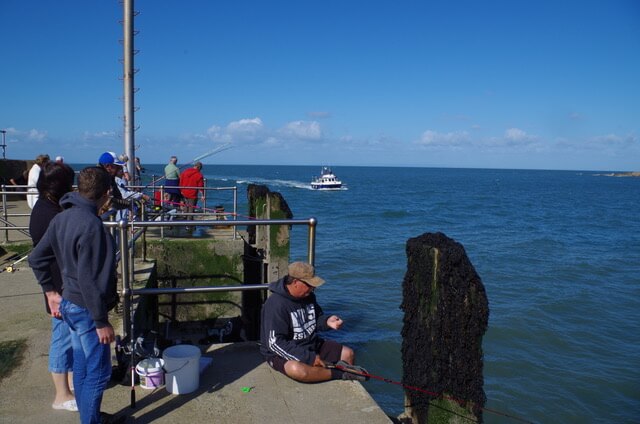 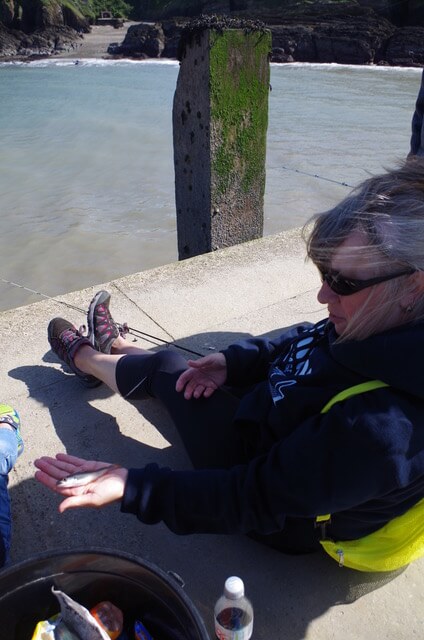 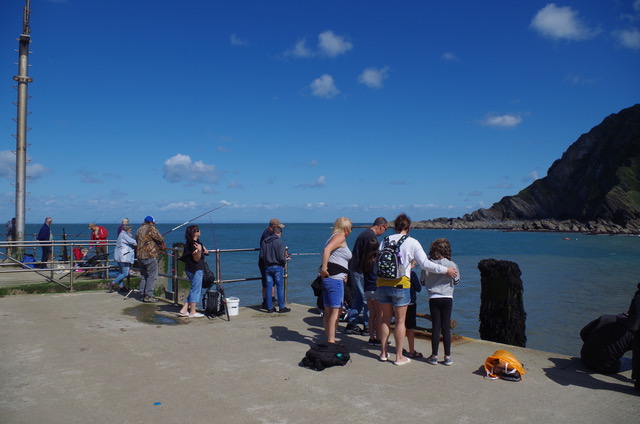 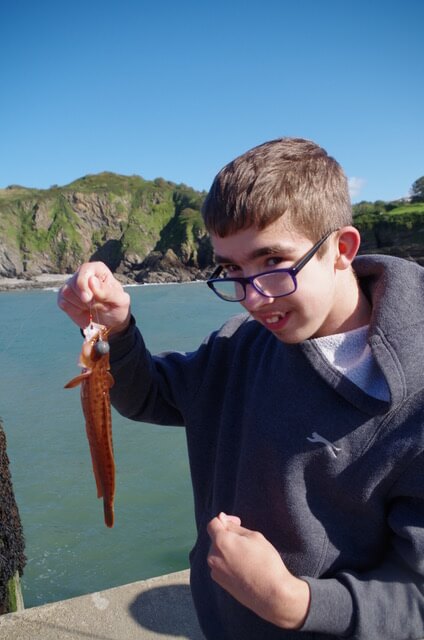 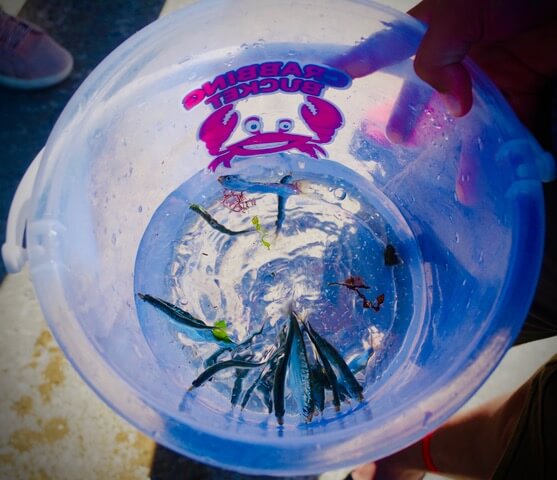 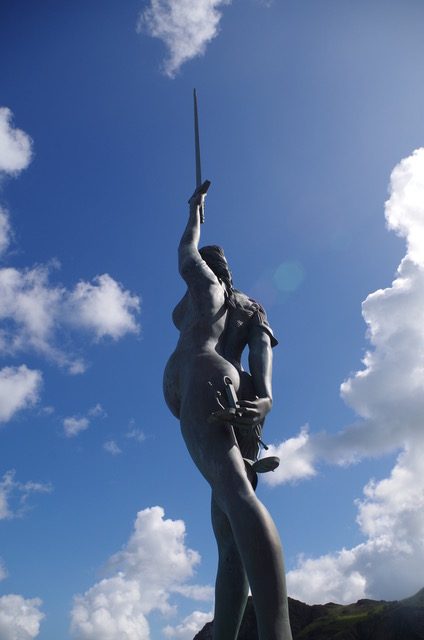 Smile of the day had to go to young Scarlett Hart who tempted a scorpion fish just before the call for all in was broadcast. Persisting throughout the day Scarlett was absolutely delighted when the fearsome looking mini species seized her bait. 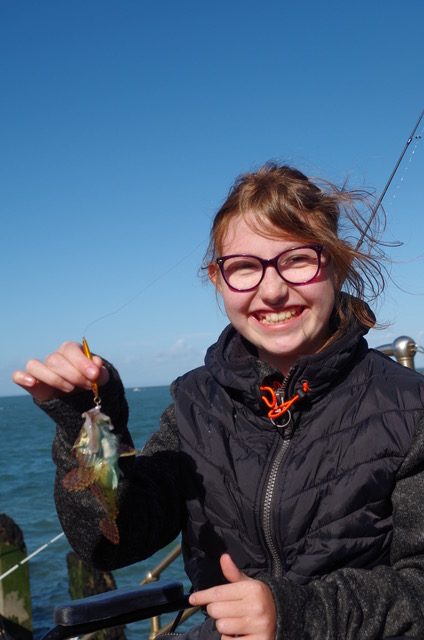 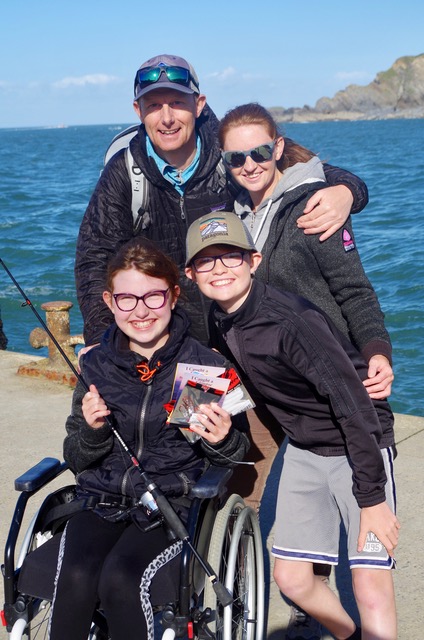 Always seems a bit sad to see the dismantling of the festival props as I drive away knowing that another summer has drifted past all too quickly. The best of the years fishing lies ahead though so embrace the coming autumn and get out there fishing.

The Fun Fishing Event signalled the conclusion of Comb Martin SAC’s summer lure fishing competition that was won by Rob Scoines with a fine boat caught bass of 8lb 8oz. 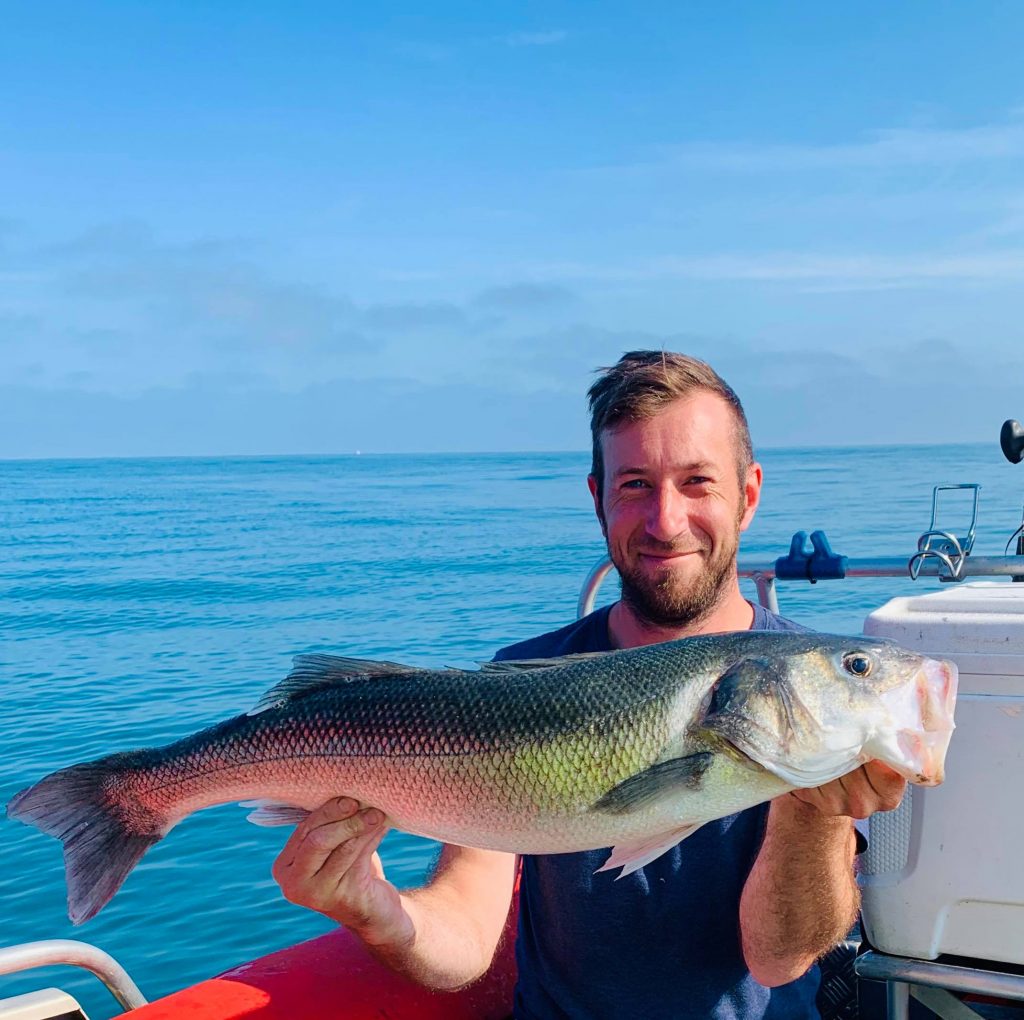 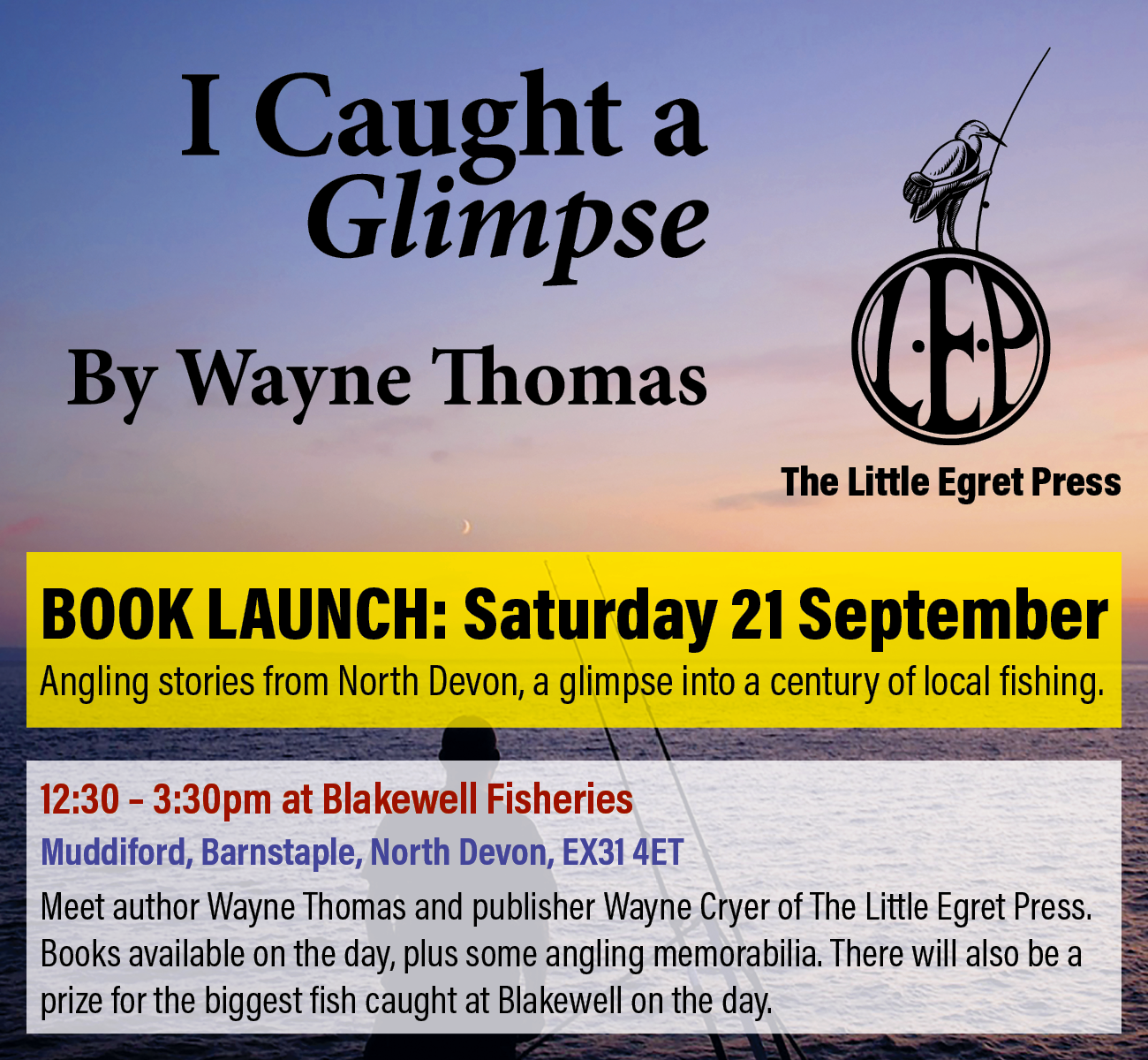