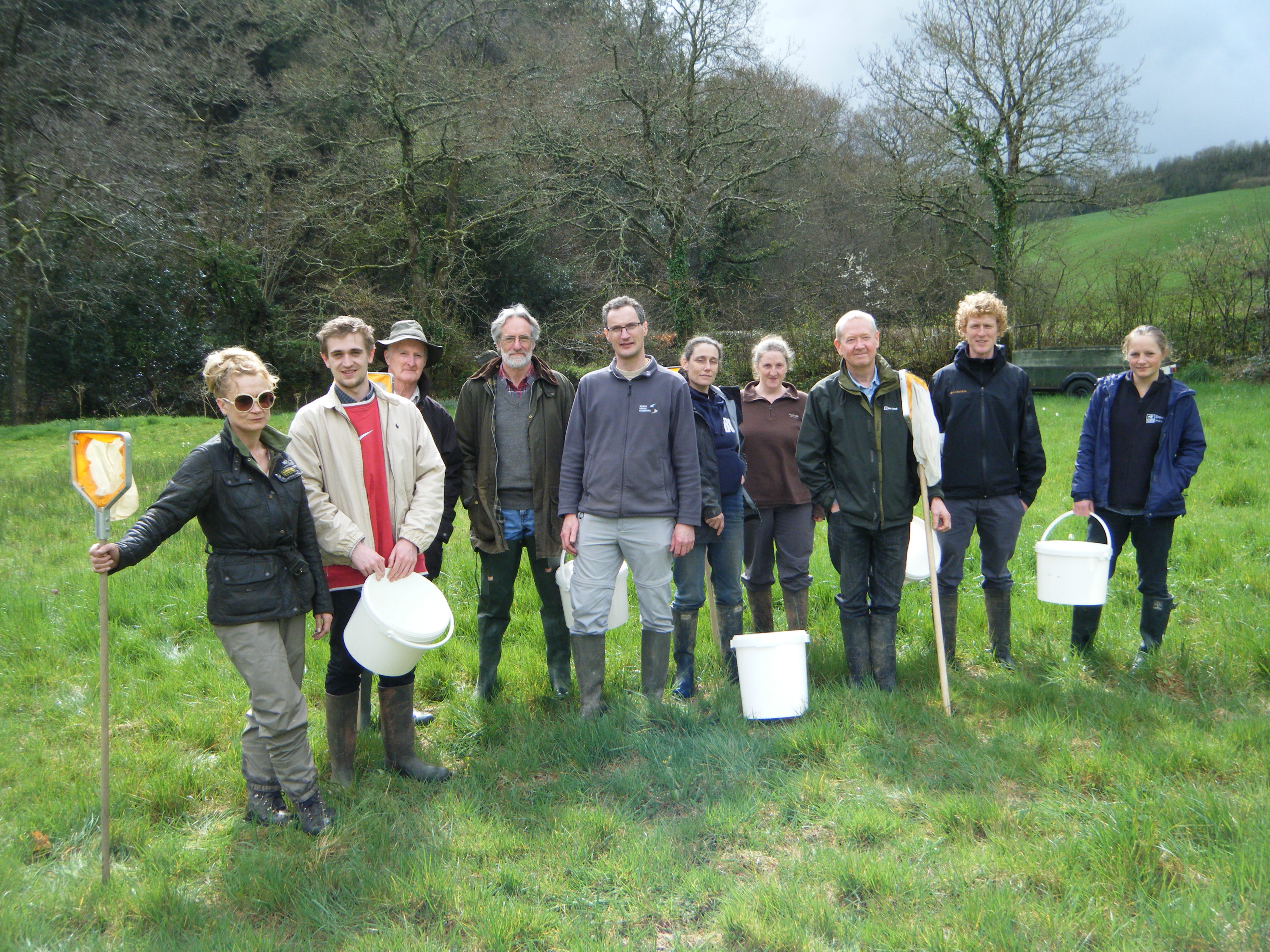 “Riverfly Partnership tutors deliver one-day workshops to fishing clubs and other organisations committed to establishing a group to monitor the biological water quality of their local waters.

Anglers are natural guardians of the river environment, and are in an ideal position to monitor the health of the watercourses they fish, by using the riverflies they aim to imitate with their artificial flies. Many angling and other interested groups expressed an interest to be able to carry out health checks on their waters. The Riverfly Partnership spearheads an initiative to allow interested groups to take action that  will help conserve the river environment. This initiative provides a simple monitoring technique which groups can use to detect any severe perturbations in river water quality and puts them in direct communication with the local Ecological Contact of the Environment Agency (EA) / Scottish Environment Protection Agency – participating areas (SEPA) / National Resources Wales (NRW) / Northern Ireland Environment Agency (NIEA). “

I joined a group of enthusiastic volunteers for a days training on the River Fly Initiative at The Fox and Hounds Country Hotel near Eggesford. The course was run in conjunction with the North Devon Biosphere and our tutor’s for the day were Matthew Edworthy from the North Devon Biospere and Izzy Moser from the Devon Wildlife Trust.

The group of volunteers was a mix of anglers and members of the community with a passion for Devon’s wildlife. All understood the importance of a healthy river and how the river fly population can act as a natural barometer to its health. Fly Fishers of course have a long established link to a rivers fly life as it is these creatures that the anglers mimic when trying to tempt the trout that live within the river.

It was observations by anglers that had helped to establish the vital link between the abundance of fly life and the richness of the river habitat. Observations over many decades revealed an alarming decline in fly populations. It was this that had lead to the River Fly Initiative.

The sampling of a section of river and careful gathering of data relating to fly life populations is a proven way of detecting any decline in the river health. This can show up problems long before any fish kill or visible signs of an issue.

The first part of the day was spent in the classroom where we were given a thought provoking briefing on health and safety and the risks we may encounter at the waters edge including the ever-present threat of Leptospirosis/Weils disease and lyme disease. We were then briefed on the identification of the fly groups we would be looking for within the river.

The life cycle of these river dwellers proved to be a fascinating insight into the rich variety of the life within our rivers and as an angler for close to fifty years I was somewhat dismayed at my lack of knowledge. Though this was one of the reasons I had enrolled on the course as knowledge of the river life enhances each day spent by the waters edge fishing.

The previous night had seen heavy rain fall over much of North Devon resulting in a brown and swollen River Taw. It seemed that our all-important practical session would be impacted upon but fortunately one of our party owned a delightful property with a small stream running through its meadow. After lunch we all tramped down to the river with our nets and buckets. Along the way we were delighted to see numerous rare snakehead fritillary flowers in the meadow. 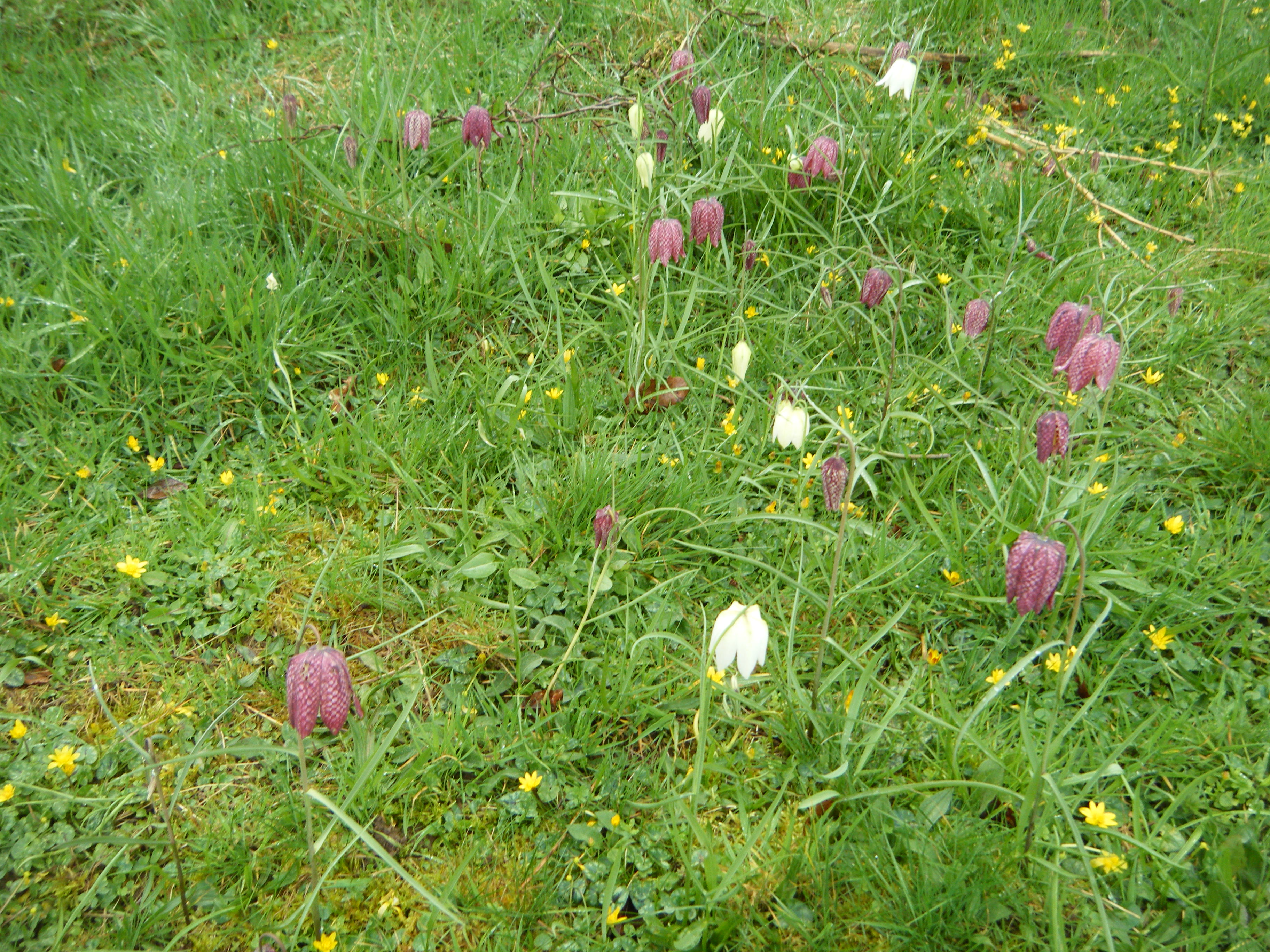 It was refreshing to share in the joy of messing around in the river with a group of like-minded people. Whilst the exercise had a valuable purpose I could not help but remember childhood days spent exploring a babbling brook. My angling life began with this fascination for rivers and the life within.

The sampling method involves 3 minutes of intense riverbed kicking and a minute of rock turning. This resulted in several buckets full of river life and detritus to take away and analyze. 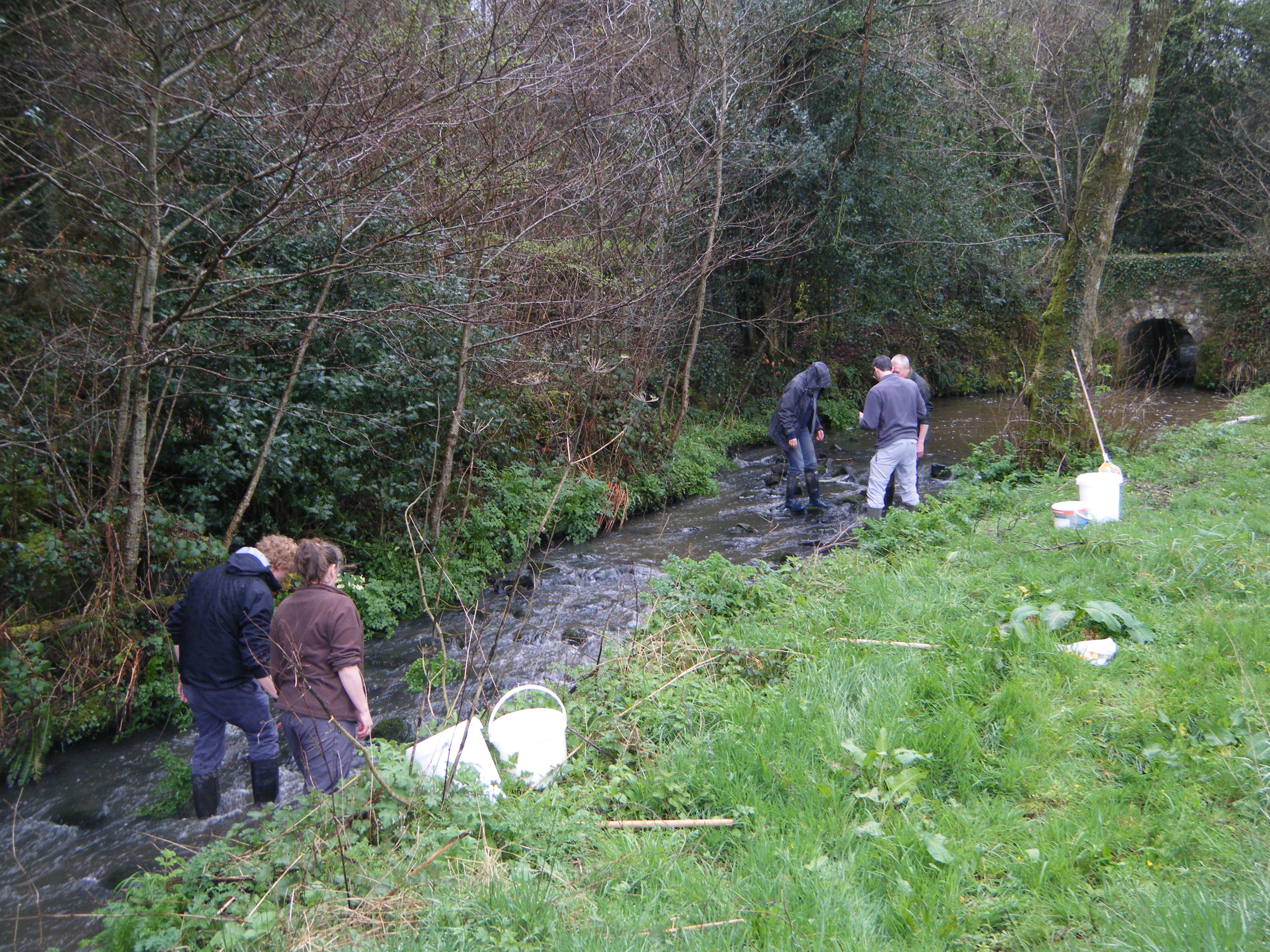 To our delight it soon became apparent that we had struck upon  a rich vein of river life with all our target species present in good numbers. Sorting the fly larvae into their respective groups proved a fascinating exercise and there were plenty of enthusiastic exclamations as various larvae were revealed. 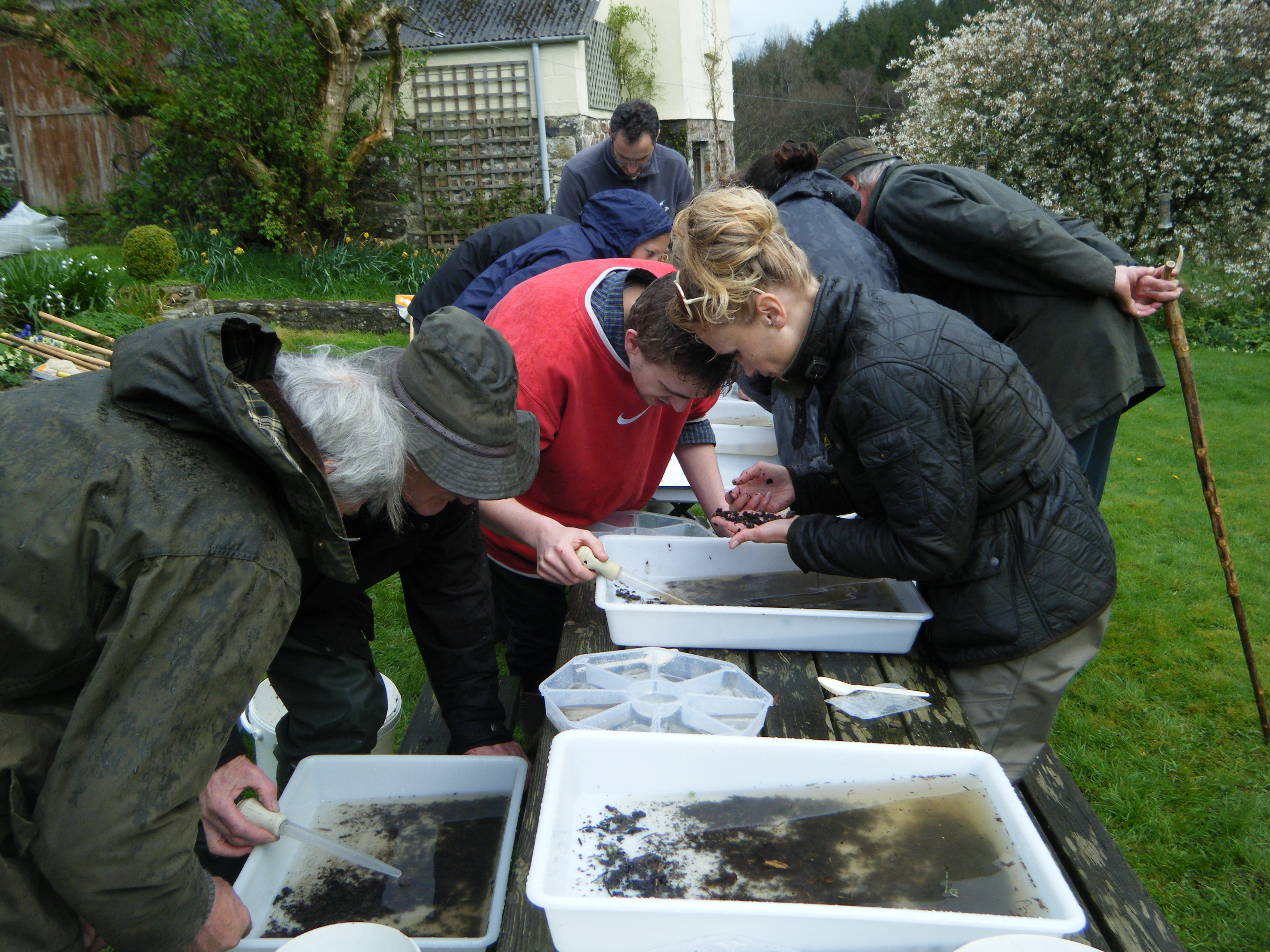 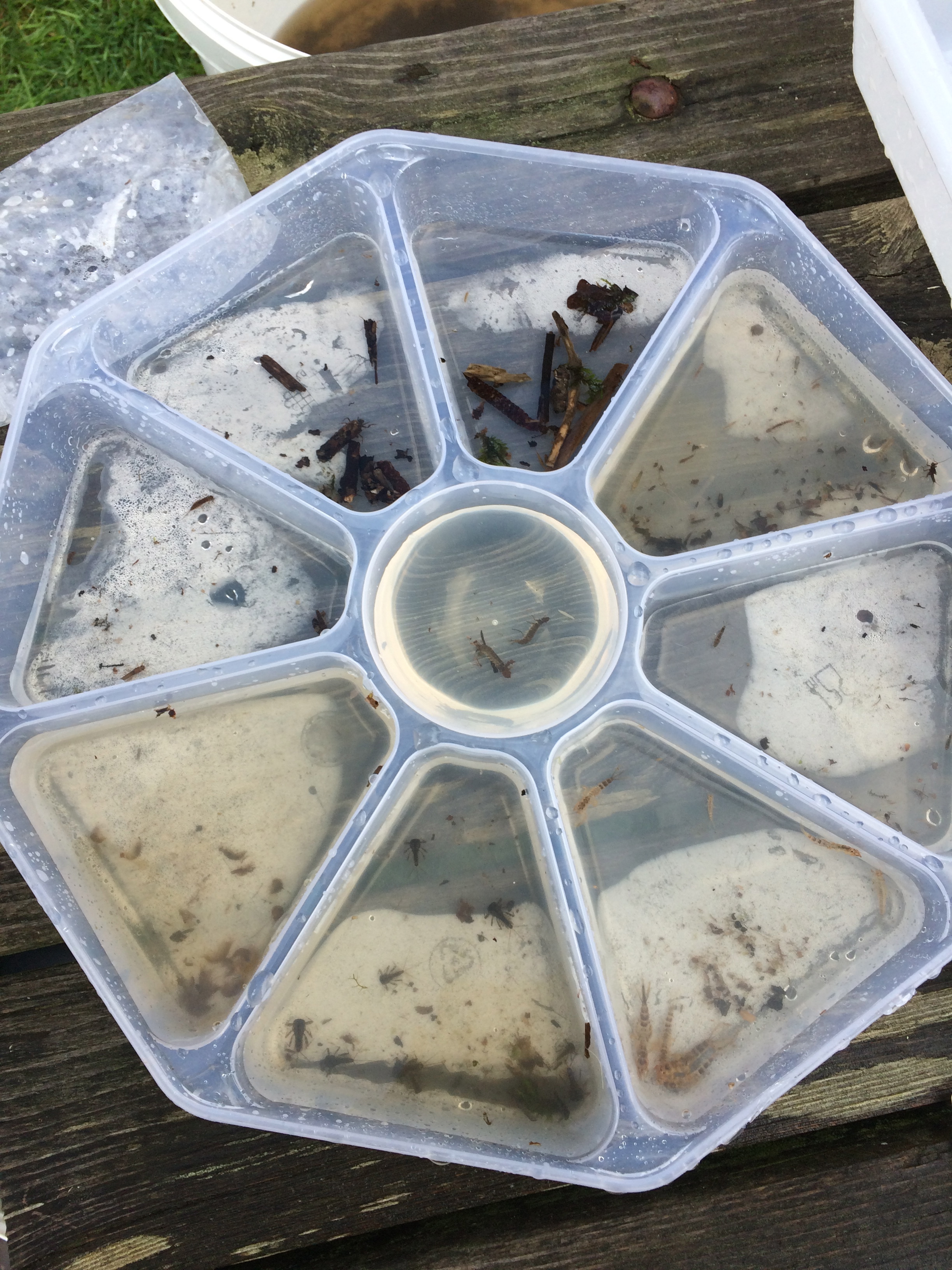 We returned to the Fox and Hounds for a briefing on logging our data and how this vital information would be used by the Environment Agency to monitor river health. There is of course a political background to this citizen science for a significant reduction in funding means that those that care about the environment have to get out there and work for the protection of the riverside habitat. It is my belief that the rivers are the arteries of our green and pleasant land. As an angler I of course have an additional link to the river in that I cast my line into it in the hope of connecting with its fish.