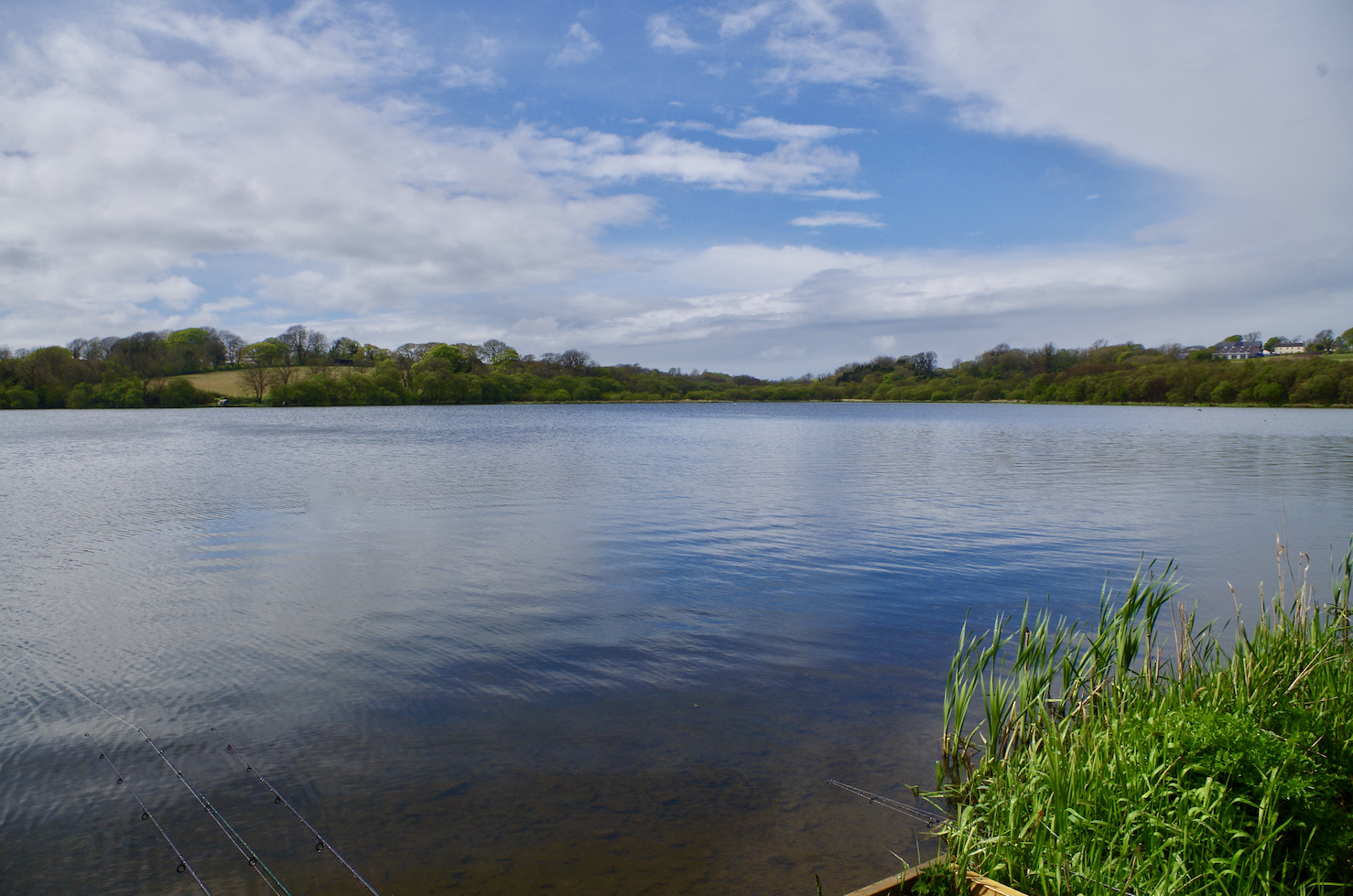 Twelve months or so ago I stood on the dam at Lower Tamar Lake watching several large carp basking in the Spring sunshine. I promised myself that when I had more time I would return and invest some quality time into pursuing fish. Twelve months on I have done just that and returned tackle loaded and ready to cast. 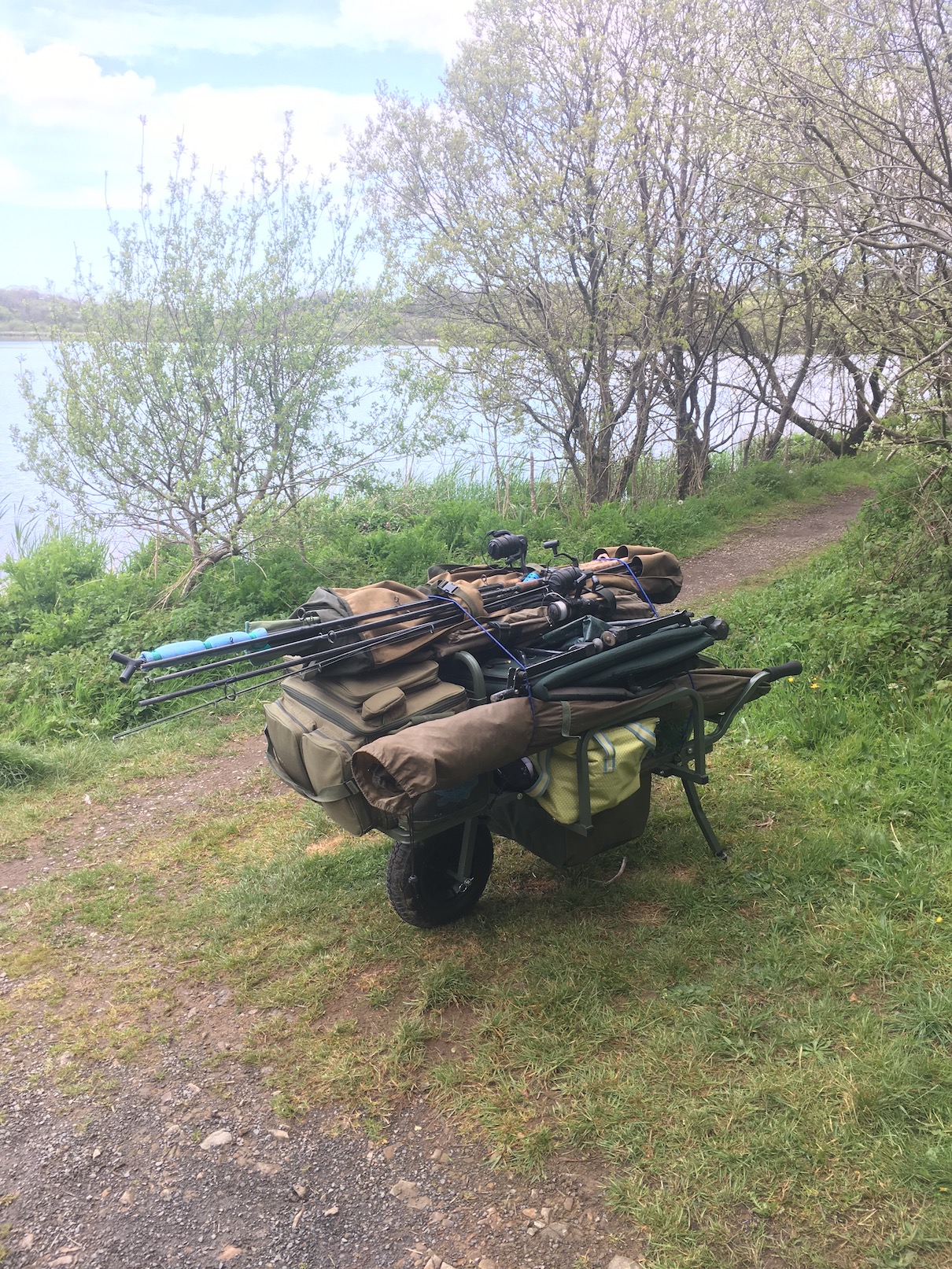 On arrival at the lake the sun is shining across this large shallow expanse of water that was created as a feeder for Bude Canal back in the 1820’s. The depths in the lake vary from 8ft to 3ft and my guess is that fish movement may be influenced by wind direction, water temperature, food availability and angling pressure.

The choice of swim is not easy as three other anglers are already in position and a quick chat with them reveals that the fishing has been slow with just one carp banked by them in the past twenty four hours.

My aim is to catch carp or a double figure bream and realisation soon dawns that this is not a forgone conclusion and any rewards will have to be earned. After a stroll around the Lake, it was gut instinct that made me choose to fish the swim at the far end of the dam that would give access to deeper water.

The barrow was loaded and pushed to the swim where I was to spend the next 24hours. Ominous clouds were building as I hurriedly erected my oval brolly shelter and bed chair, stowing those items that needed to be kept dry beneath in preparation for the oncoming rain. 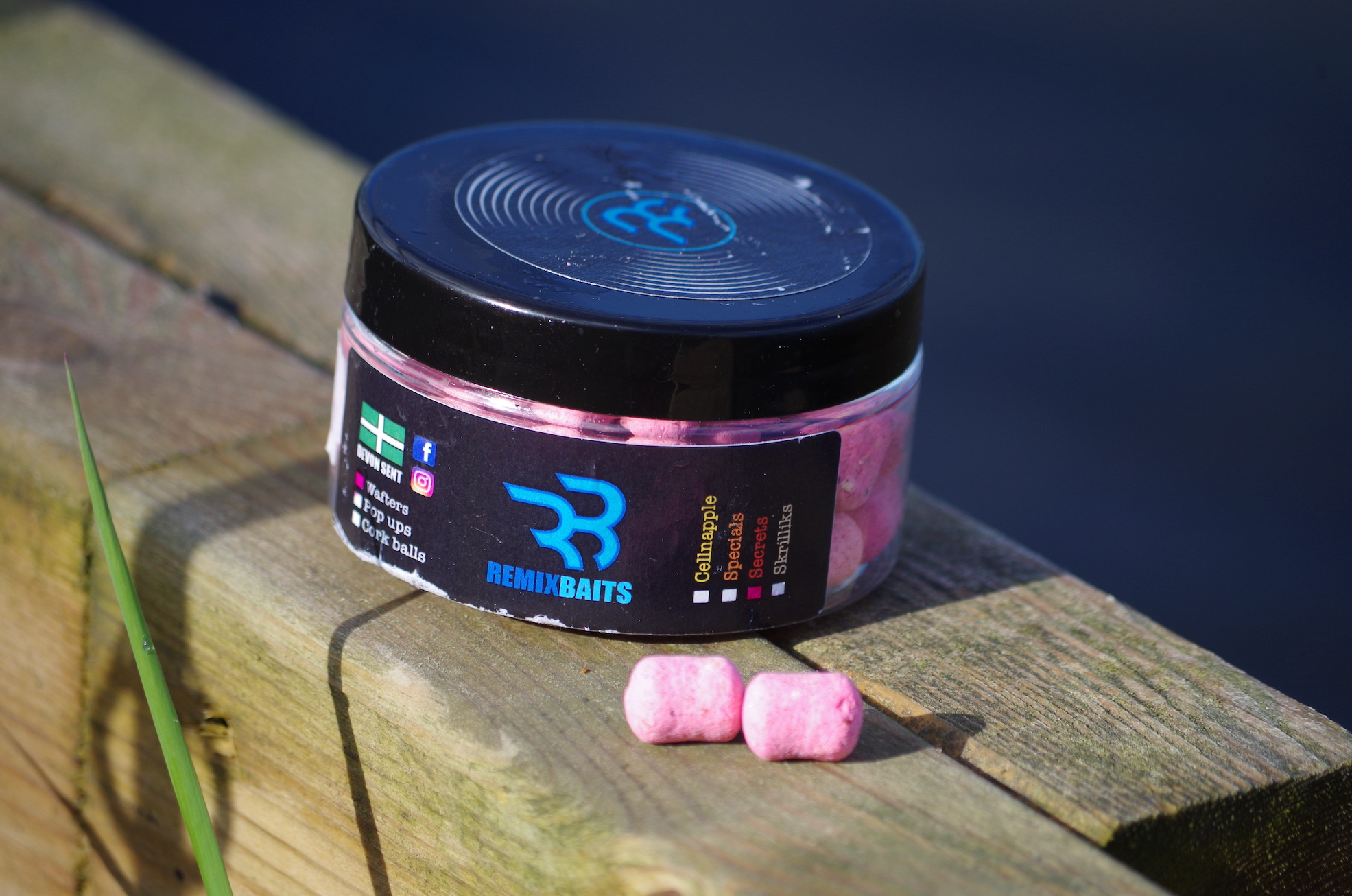 I cast around with a marker float that revealed that I had seven foot of water at fifty yards. The next thirty minutes was spent launching a few spod’s full of particles to the zone I intended to place my baits. Two rods with wafters and one with a method feeder baited with a couple of grains of artificial corn. 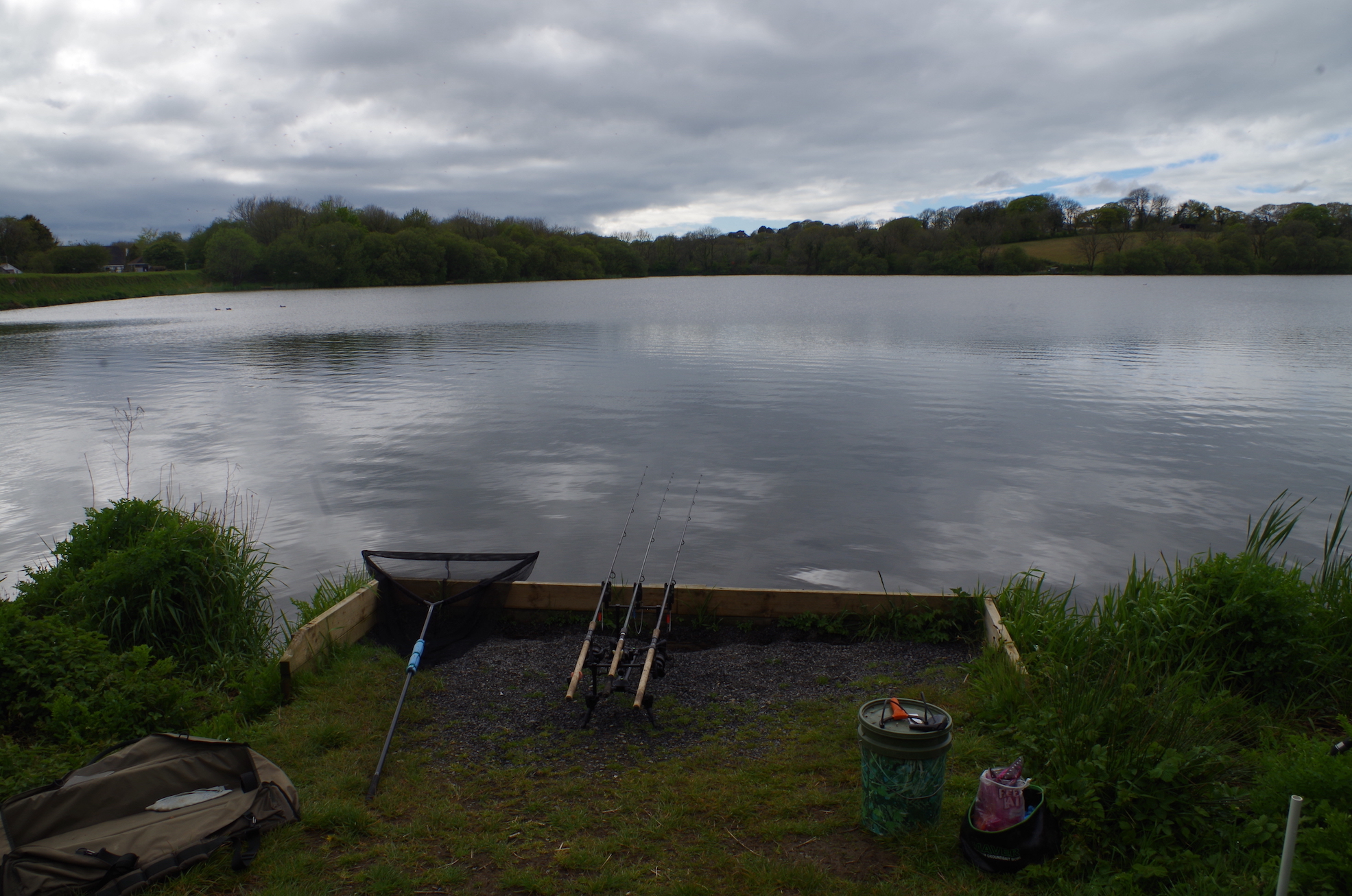 The rods were cast out as the rain began to pour down, the sky taking on a grey and foreboding tone.

I took shelter beneath the canvas and began the vigil watching the days weather pass by with traps set. Strange how time flies as the contemplation and observation occupy the mind. 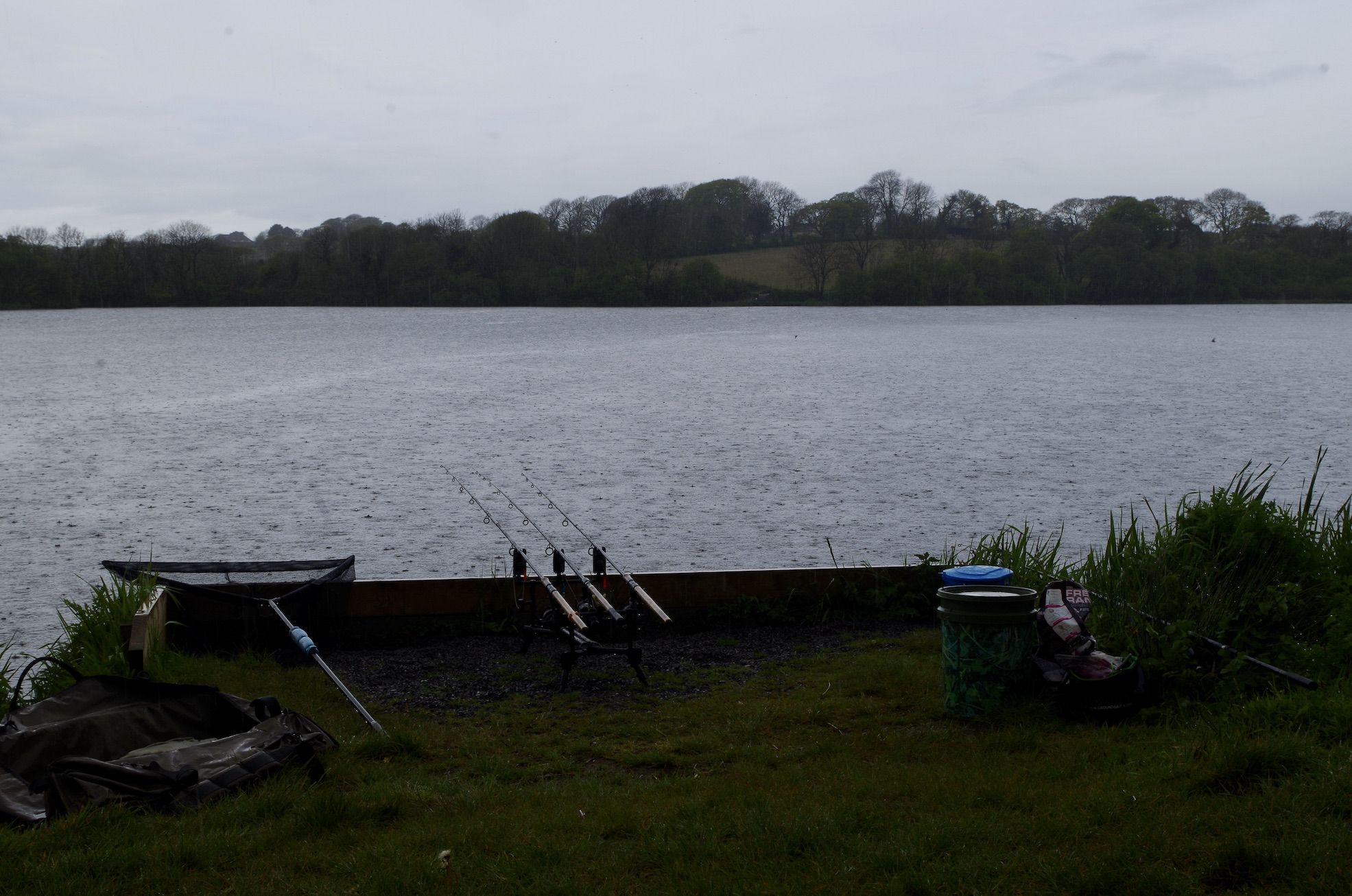 As the rain beats down swallows and martins swoop low over the water. Ducks and ducklings busy about and a grebe hunts far out in the lake. As the rain eases warm sunshine illuminates the scene transforming the vista to that of summer. A buzzer hatch brings a frenzy of activity from the summer migrants. The swallows and martins are joined by the delightful sight of swifts twisting and turning in the blue sky a sure confirmation that Spring is turning relentlessly towards summer. 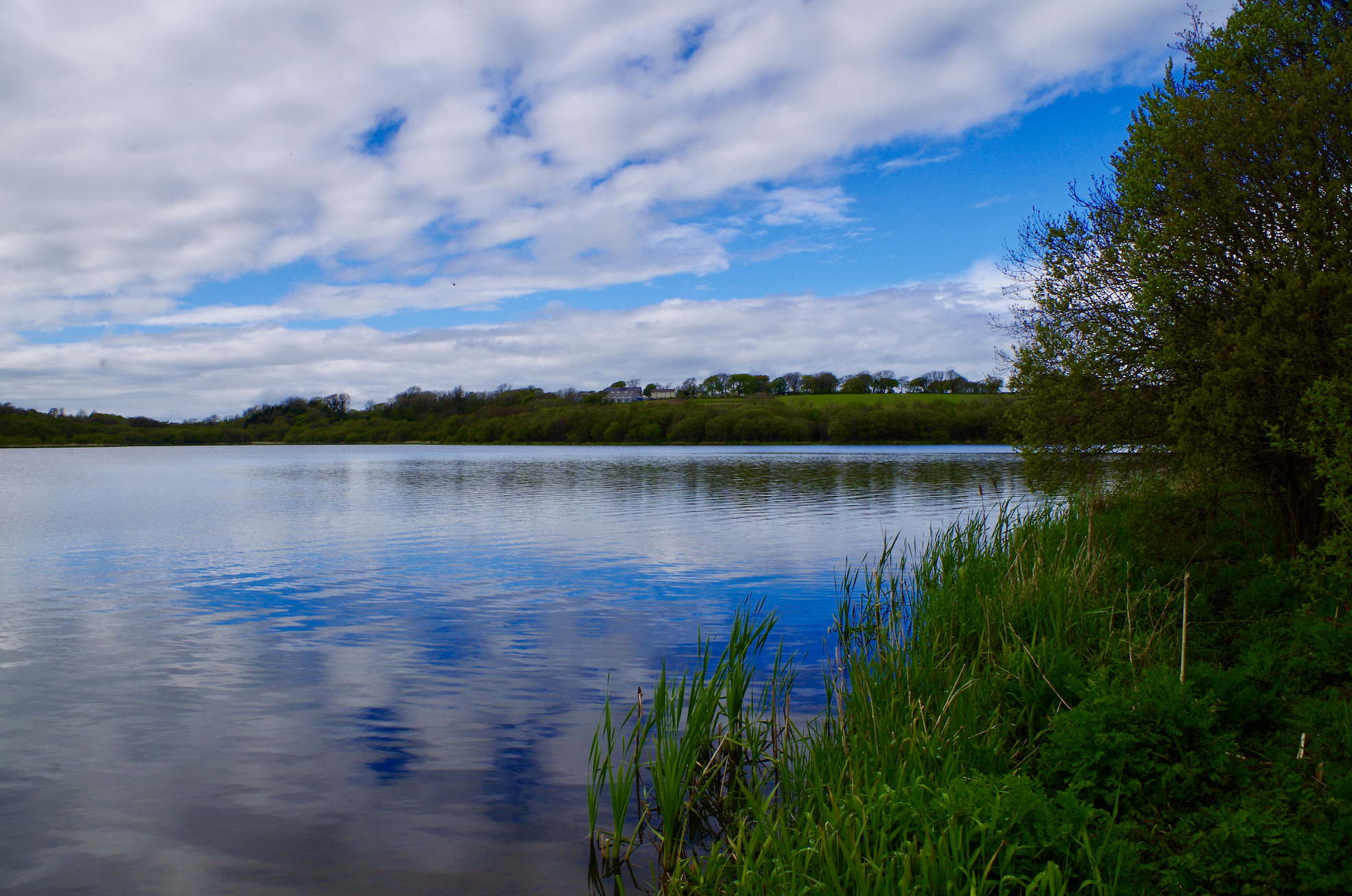 Afternoon turns to evening and baits are checked and recast. Sausage’s sizzle and hot coffee is enjoyed whilst watching and waiting. 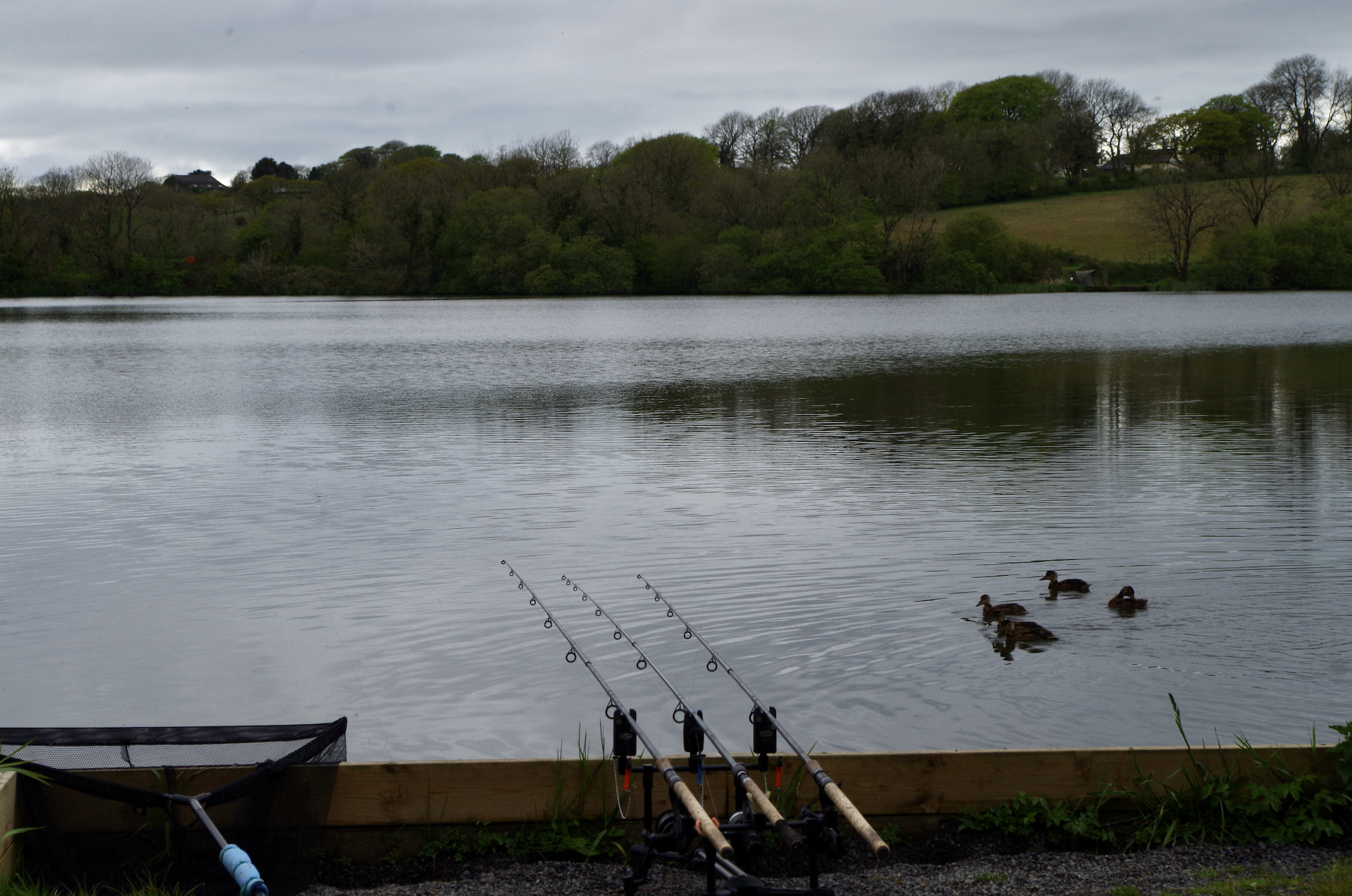 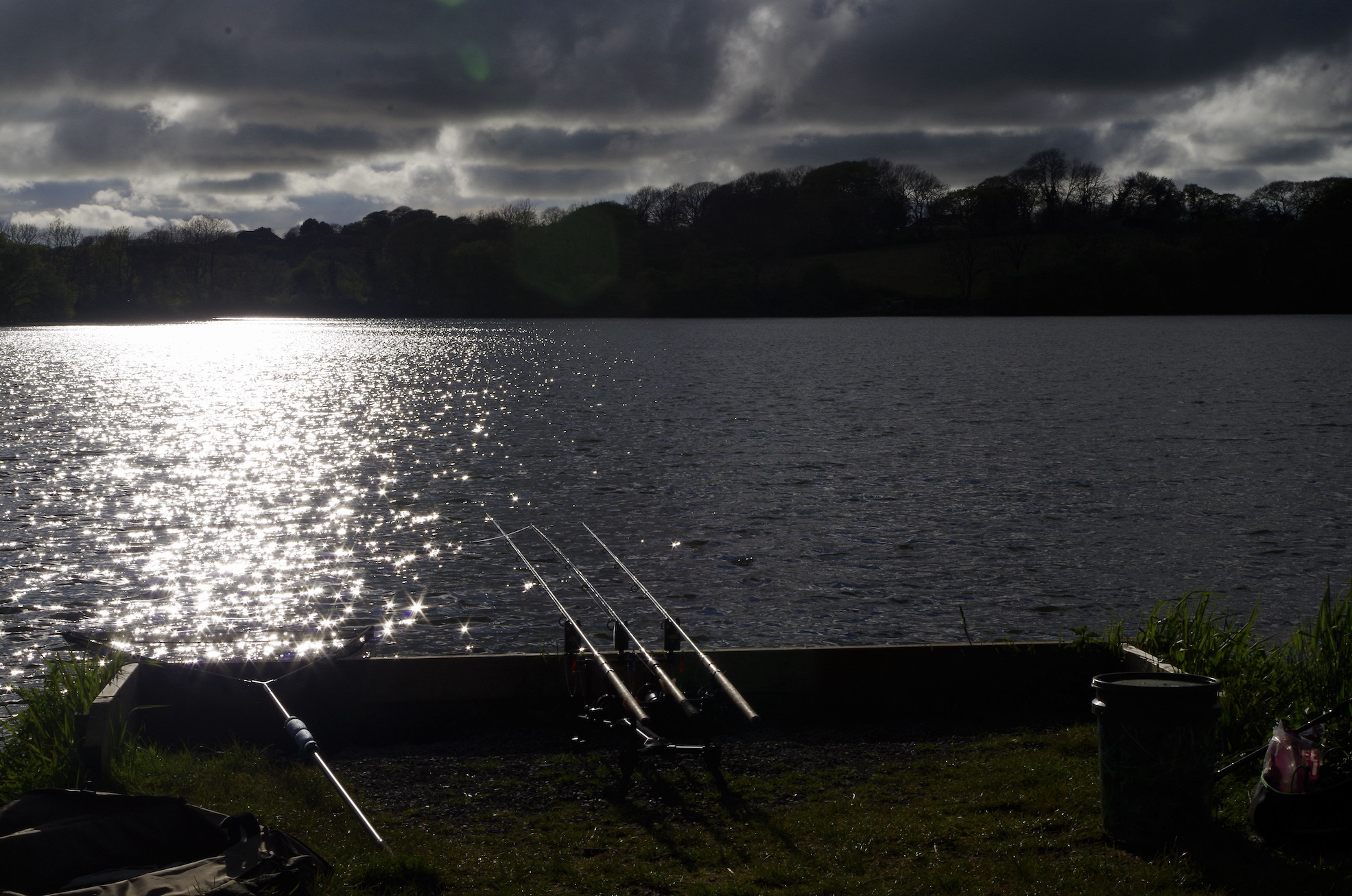 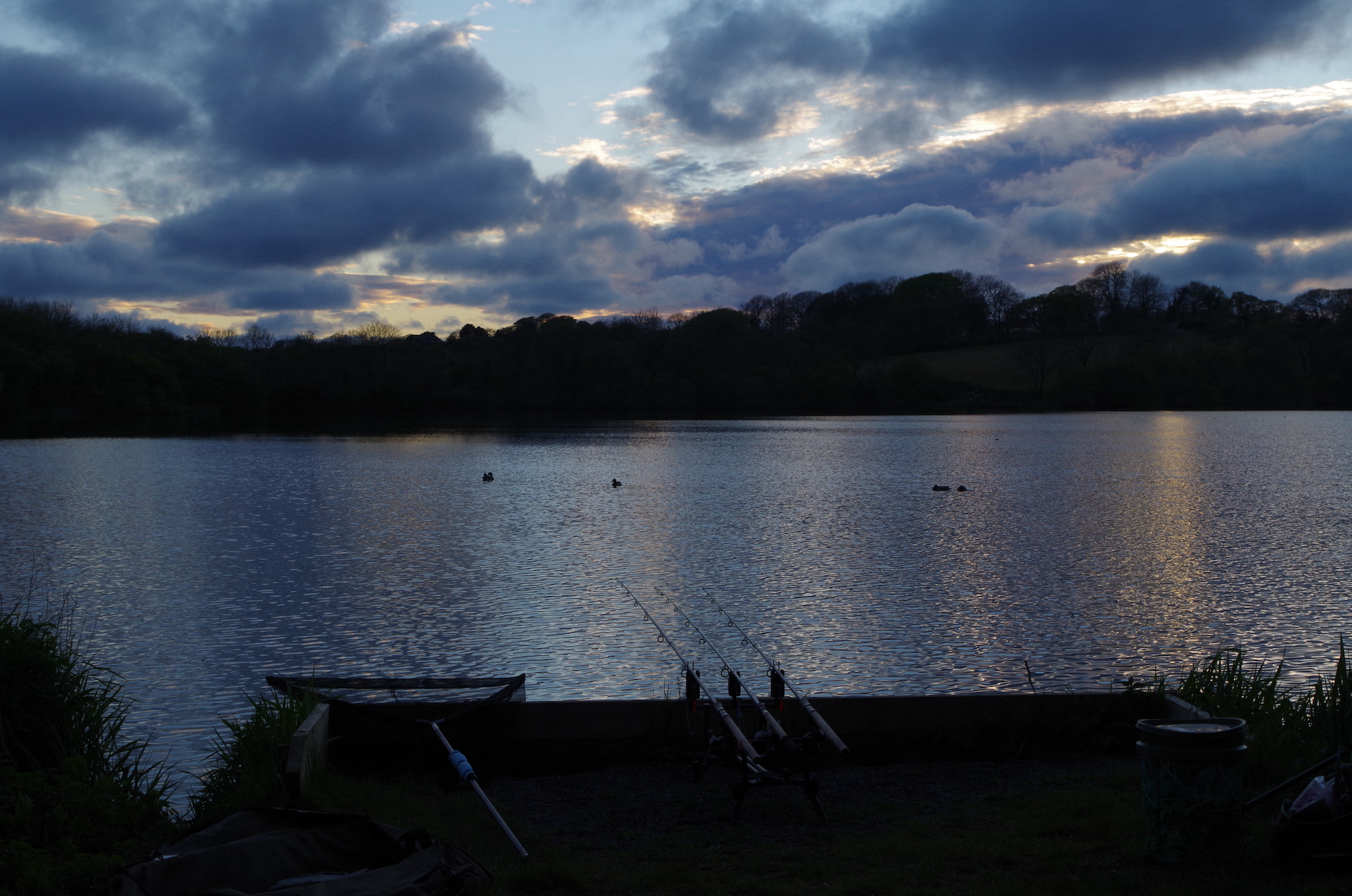 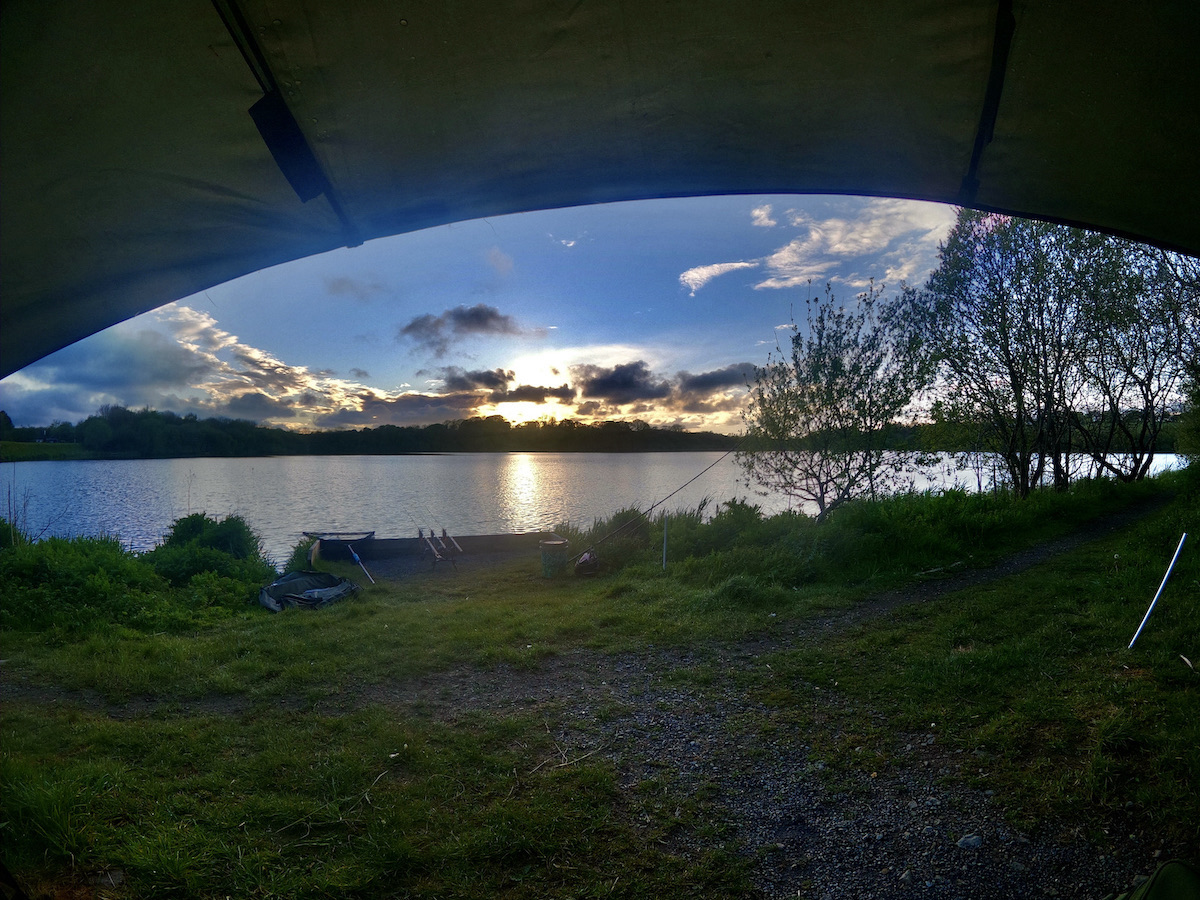 The evening starts to descend and the light fades and with it comes expectation that the alarm will ring out as a fish locates the bait. Wood pigeons coo relentlessly and the hooting of an owl drifts across the stilling waters as the breeze drops away with the coming of night. 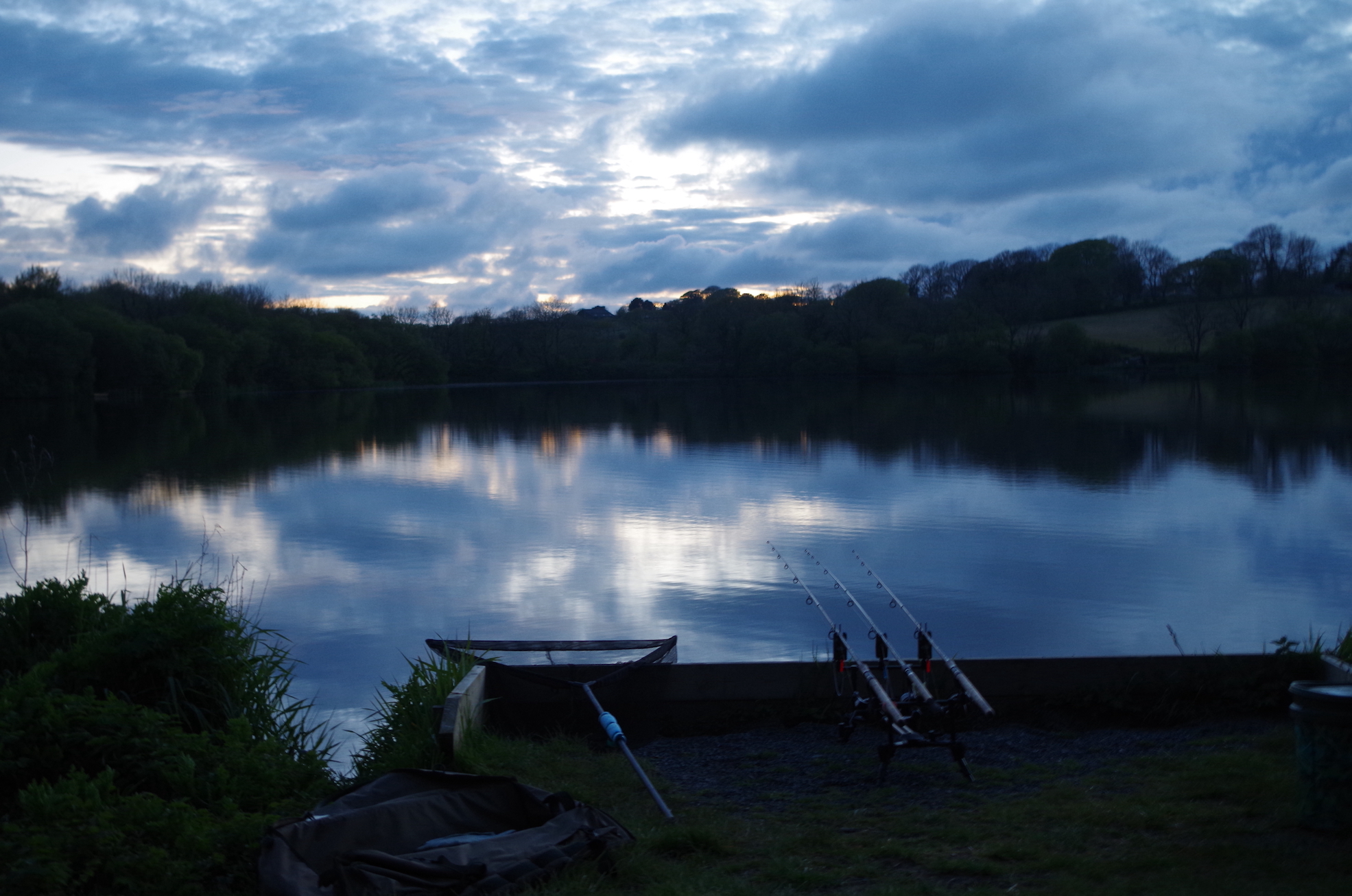 Far across the lake the surface is broken by fish but they are beyond my range.

I drift off to sleep the twinkle of farm lights in the distance. Rain patters on the canvas and cool air intrudes into the shelter.  I drift back into sleep. The alarm screams out and the blue light of the Delkim shatters the darkness. I stumble out into my boots, right foot in left and left foot in right! I lift the rod to feel a pleasing weight on the end. I am hoping it’s a big bream as I slowly retrieve a ponderous dead weight. Within yards of the margin’s, it wakes up ripping line from the reel telling me it’s no bream. 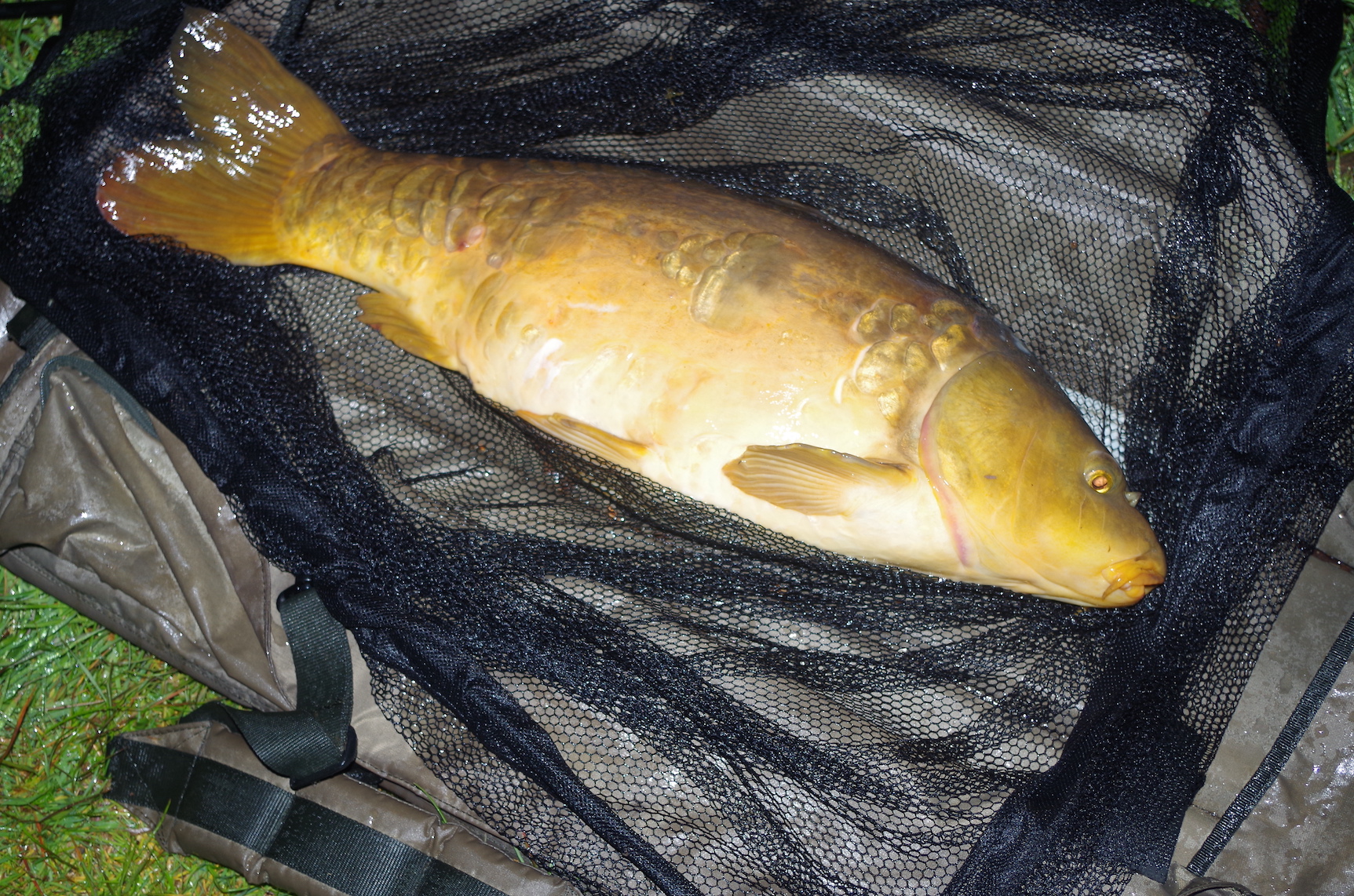 A golden flanked mirror carp of 19lb 4oz is a pleasing result and avoids a blank session.

After recasting the rod, I retreat back to the warmth of my sleeping bag. Heavy rain lashes down and I dread another run.

I sleep an interrupted sleep drifting in and out of strange dreams that seem to have been prevalent throughout the previous months of pandemic invoked lockdown. I step out into the night to answer natures call and marvel at the vividly clear star studded night sky and reflect on the fact that this is one of life’s constants virtually unchanged for millions of years. 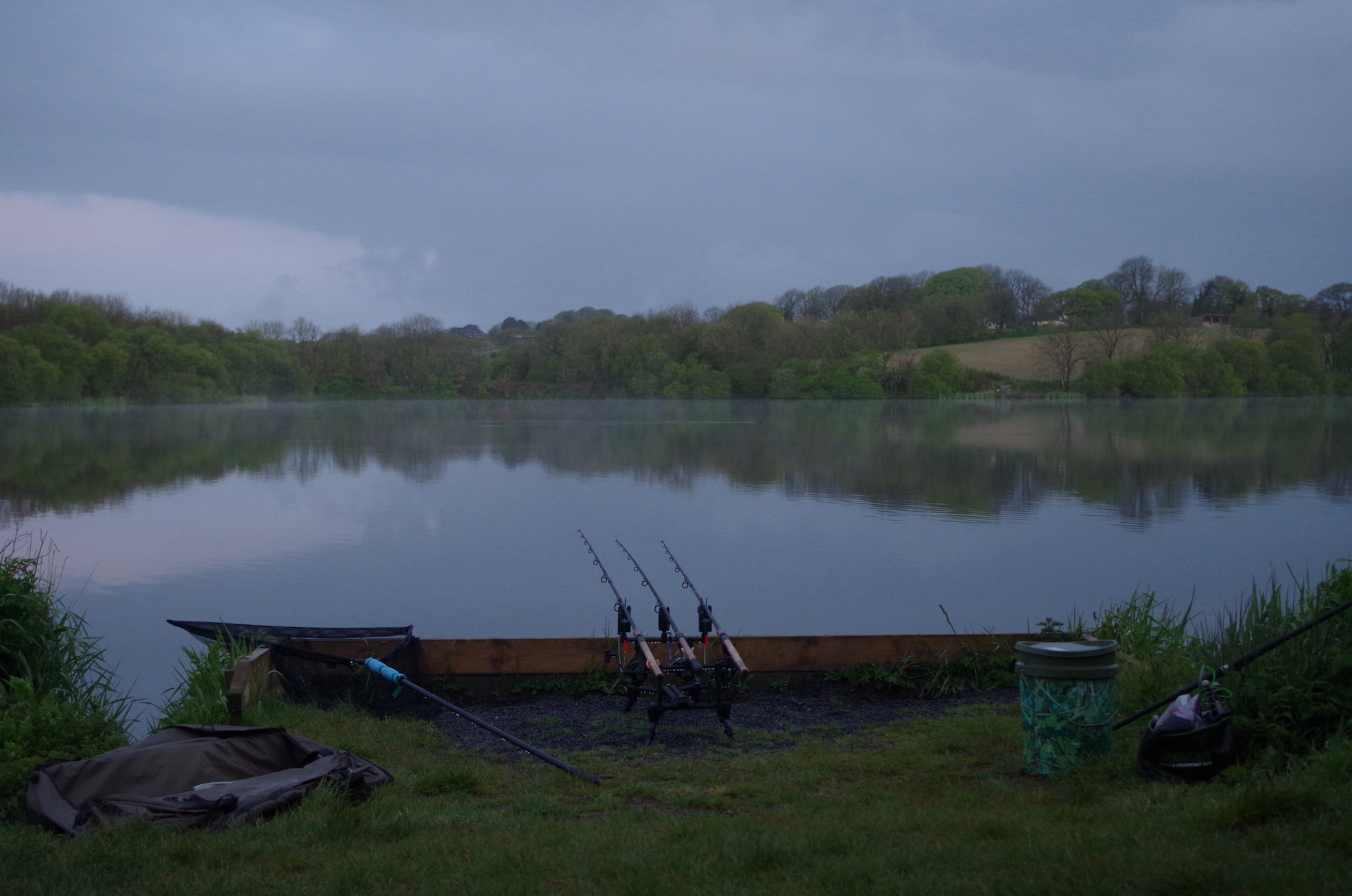 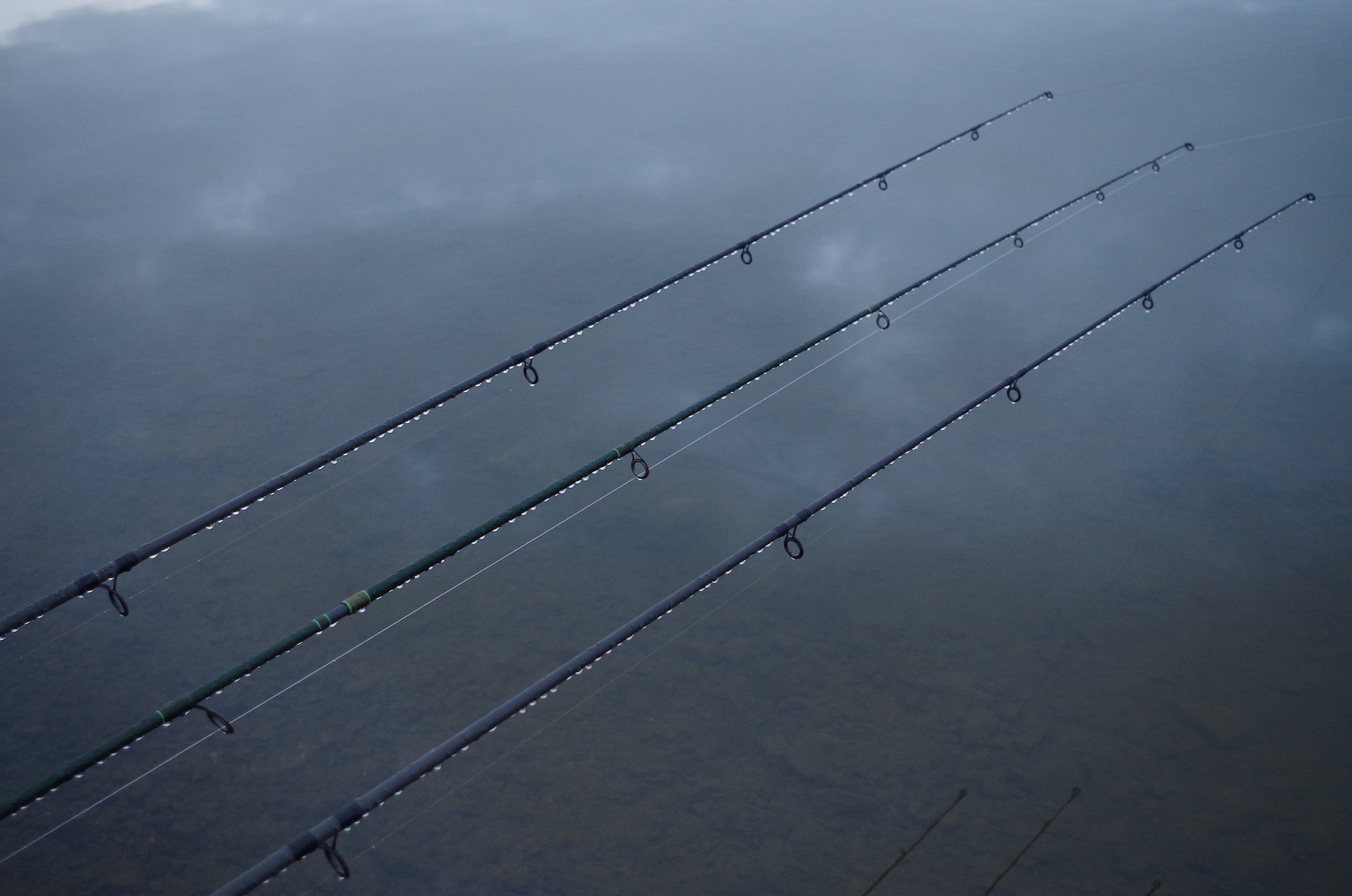 Dawn breaks and the dawn chorus rings out to greet the day. All is still with a mirror like lake stretching before me. I savour the dawn expectantly but all is quiet. A couple of hours later I boil the kettle and cook up a bacon butty. 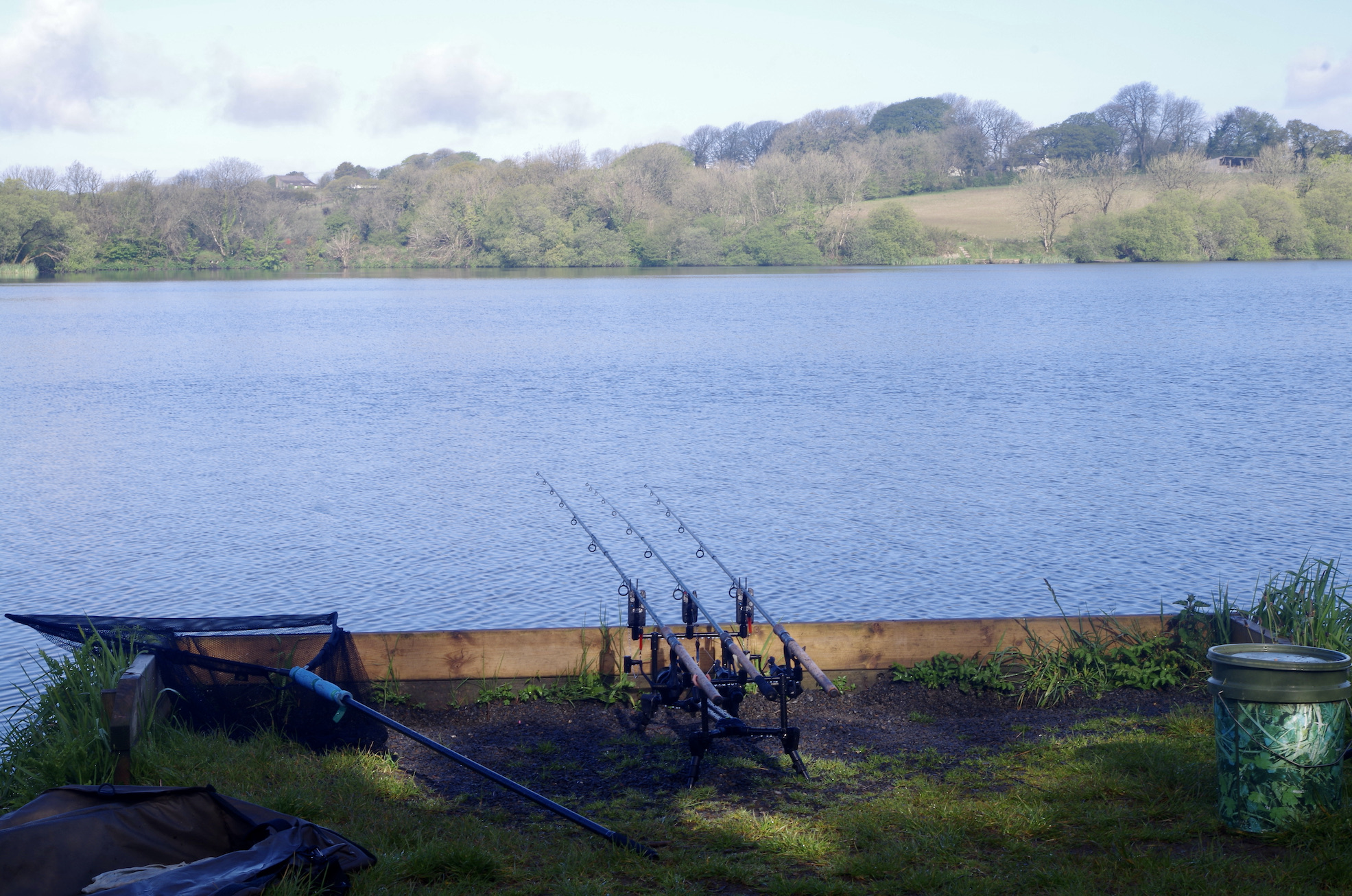 A couple of dog walkers take  a stroll and the day unfolds sunshine illuminating the lake as life resumes. I chat to a fellow angler of waters he fishes and swap notes. He has caught one bream of perhaps five pounds in the night and congratulates me on my success. 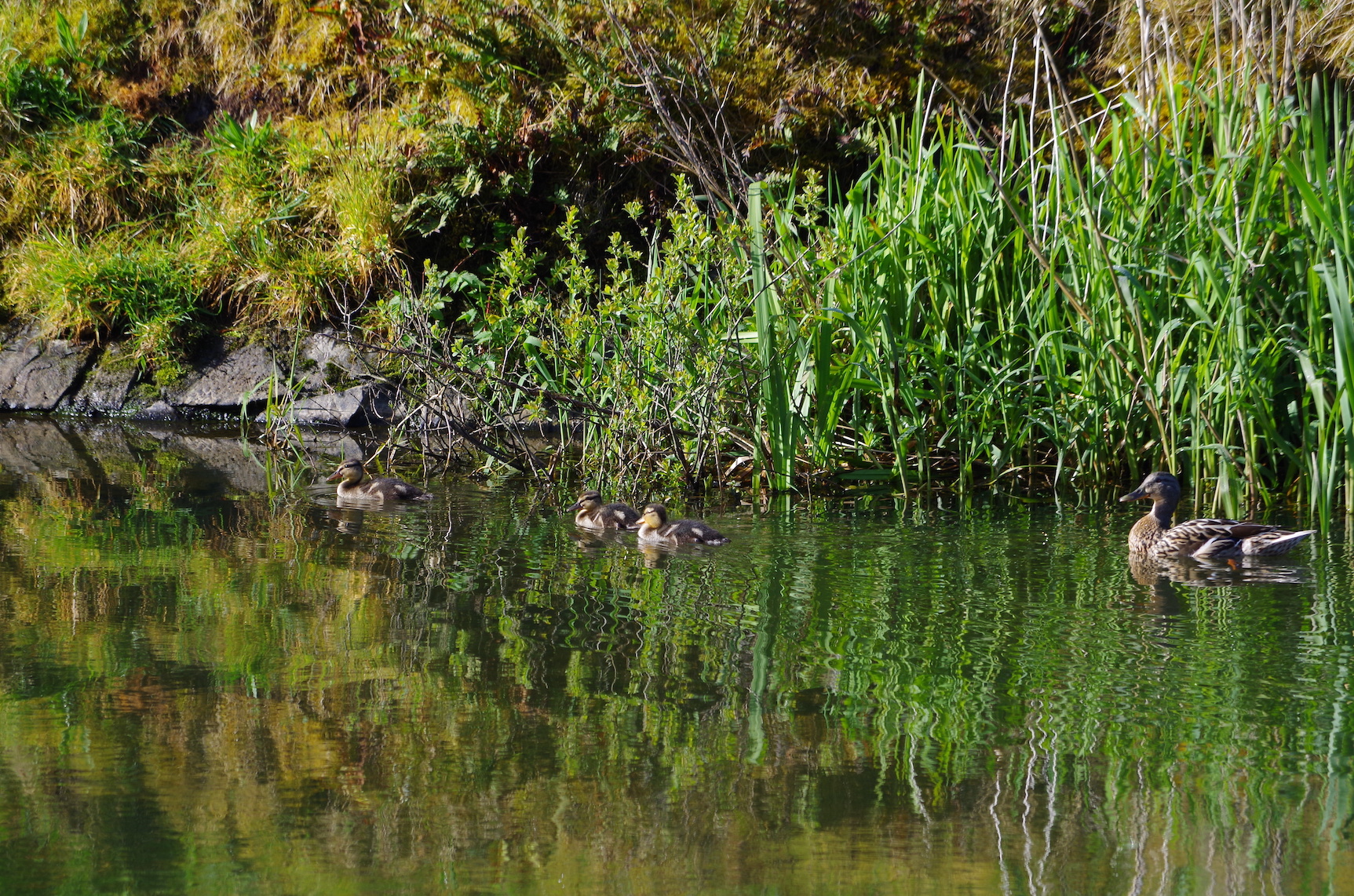 With heavy rain forecast I slowly pack away already planning my next trips. I intend to catch a carp from each of SWLT’s waters before the year is out and have made a good start. But still need to catch that double figure bream.

Lower Tamar Lake can be a challenging venue but it has many treasures within including carp to over thirty pounds, double figure bream, 2lb plus roach, big perch, tench, trout and eels.