Skip to Main Content
Many Thanks to Martin Turner for an excellent round up of this years Bideford Matches. 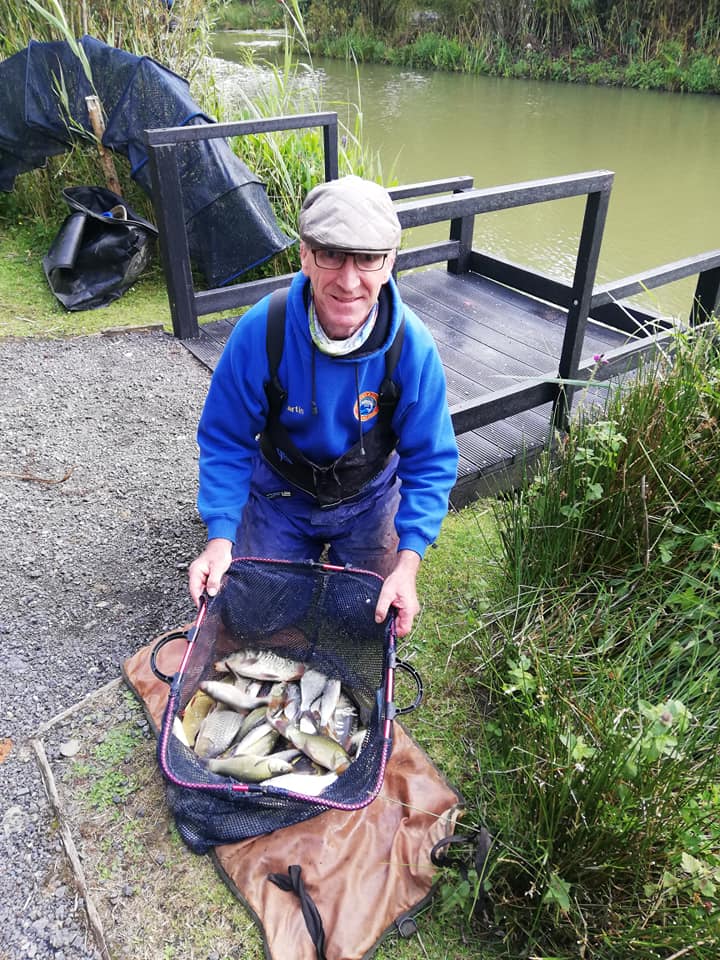 Our match calendar was, once again, interrupted by the continuing Covid restrictions. October’s 2020 match was our last competition at Tarka for the year, fortunately we were able to resume running regular monthly matches in May of this year. A fantastic attendance of 23, almost a full house, met up to once again compete on George’s Lake. Paul Elworthy had almost 30lbs to win the day, which reassured us that the measures taken to protect our fish stocks had been successful. With Covid procedures in place we were again in a position to begin our Wednesday evening competitions. Kevin Shears set the early pace winning with a bag of 20lbs mainly Skimmers. After 4 matches new member Steve Johnson and ex-Bude member Nathan Underwood were forging ahead in the league. The matches were mainly dominated by Bream, Tench and smaller Carp, 30lb plus needed to win most weeks. Halfway through the evening league Steve had withdrawn due to family illness, Nathan continued to score well. Mike Snudden using a chopped worm approach managed to put some good bags together and 3 consecutive wins, the best 54lbs 2oz in 3 hours! We averaged 18 attendants which was great, and the weather was fantastic allowing us to weigh in almost all 10 matches without head lamps. 26 different anglers fished throughout the league; the final scores were: first overall Nathan Underwood with 115 points; second Martin Turner 102 points and third Kevin Shears 91 points. Our last evening event was our pairs match drawn top to bottom from the final league. Kevin Shears and Craig Lamey 52lbs 2.5oz were the winners on the night; second were Anthony Bentley and Tyler Scott with 45lb 2oz.
We were once again able to fish our inter-club match against Plymouth and District Coarse Angling Club, our team travelled to their water at Cadover Lakes, a very deep ex-clay pit on Dartmoor. It proved tricky and we came away with a narrow lead 34lb to 29lb. We welcomed the Plymouth lads back for the return leg at Tarka; 2 teams of 12 fished. Led by Kevin Shears, 37lb top individual, we won the day with a whooping 230lb to PDCAC’s 63lb.The other team event was held at Stafford Moor, where we took a battering from North Devon Match Group Pros.
Bideford and District Angling Club’s aims and objectives are (from memory) ‘to promote and foster angling in the area’; with this in mind we ran some Junior events this summer. By running these as small matches I had hoped to be able to introduce new youngsters to our sport and to encourage those that already compete regularly. Saturday afternoons saw some excited youngsters eager to catch some fish, the over 14’s group was a very close-run affair this year with Thomas Scott edging out his older brother on weight count-back over 4 matches. Under 14’s section was won by 8-year-old Charlie Hedden closely followed by Brodie Allin. We must thank Thomas Downing for securing 2 magnificent boxes of goodies from his sponsor Bait-Tech, Summerland tackle for their generous support with prizes and Mervyn Beale for supplying the engraved medals.
As our monthly senior competitions continued to attract 20+ anglers the catches began to be dominated more by Carp, although Skimmers, Bream, Roach, Tench and Crucians always featured in the nets.
Currently, with 2 matches remaining, Kevin Shears and Nathan Underwood are tied for the lead with 77 points. Les Polden third on 59 points and a late run of 2 wins, has pushed Steve Craker up to fourth with 51 points.
As I write the ropes are being placed across the lake to protect our stock from cormorant attack throughout the winter months. Pegs will therefore be limited but I hope to be able to run the remaining matches on Tarka.
In conclusion the lake has fished exceptionally well this year, with great attendances and excellent bags being brought to the scales. All species seem to be thriving, particularly the Tench and Crucians. Hopefully if we can remain vigilant over the winter period we can look forward to a bumper, FULL season next year.
Obviously, I cannot conclude my report without expressing my thanks to Steve Bailey and all those who have made it possible for us to fish at Tarka. Personally, I would like to say how sorry I am to hear that Steve has decided to stand down from the role that he has held for many years. He will be sorely missed.
Martin Turner
https://www.northdevonanglingnews.co.uk/2020/05/31/bideford-angling-club/