South West Lakes Trust have been running a month long trial at the 700 acre Roadford Reservoir to ascertain its perch fishing potential. During August boats have been available for anglers to target the venues perch using lure fishing tactics. The venue is normally fly only with brown trout the target.

Previous trials have enabled anglers to catch perch to over three pounds with good numbers of fish over 2lb. Fly anglers targeting the lakes brown trout sometimes get frustrated with the huge numbers of small perch present. These small perch undoubtedly provide food for the larger perch and big trout.

The opportunity to explore this potential was too good an opportunity to miss. So when my long time angling friend Bruce Elstone invited me to share a boat with him I jumped at the chance.

Bank Holiday Monday saw us arrive at the Lake as the early morning mist began to clear. The forecast was for a hot sunny day, far from ideal conditions to target the venues perch. But with only a limited time at hand we could not choose our day.

We set off to explore targeting fish in the bays. The low level of the lake revealed the skeletal remains of the many trees that had been drowned in the flooding  of the valley years before. 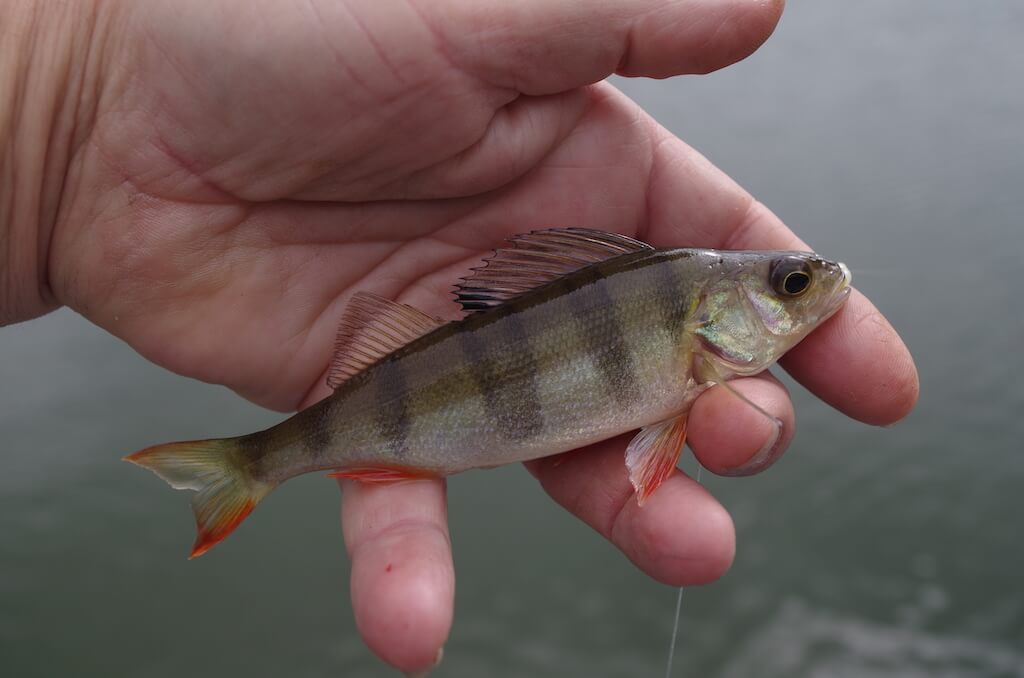 I started off using a jig headed soft plastic lure on the point and a small drop shot pattern a couple of feet above. Within minutes I was catching small perch almost every cast. Bruce searched the bay with a  spinner but to our surprise failed to tempt the small perch.

Bruce changed tactics using a slow jig pattern that flickered tantalizingly as it was worked beneath the boat. This worked well and Bruce was soon catching the small perch in good numbers. Having caught plenty of small perch we now hoped for that bigger fish and eventually Bruce’s rod took on a more pleasing curve. After a short tussle the pleasing sight of a big perch materialised beside the boat where it was safely netted. At 2lb 4oz it was a good start to the day. Minutes later it was my turn as a fish of 1lb 14oz seized my dropshot lure. 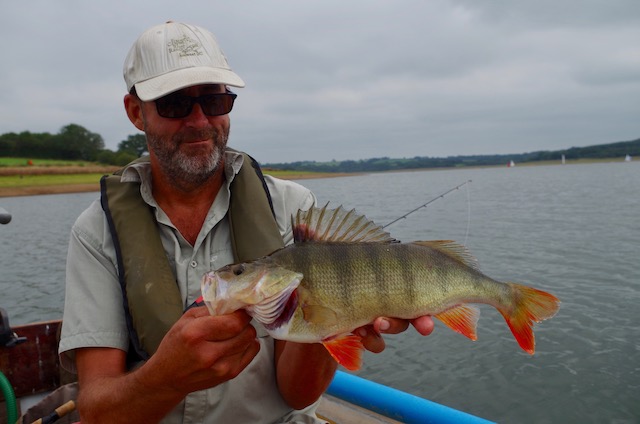 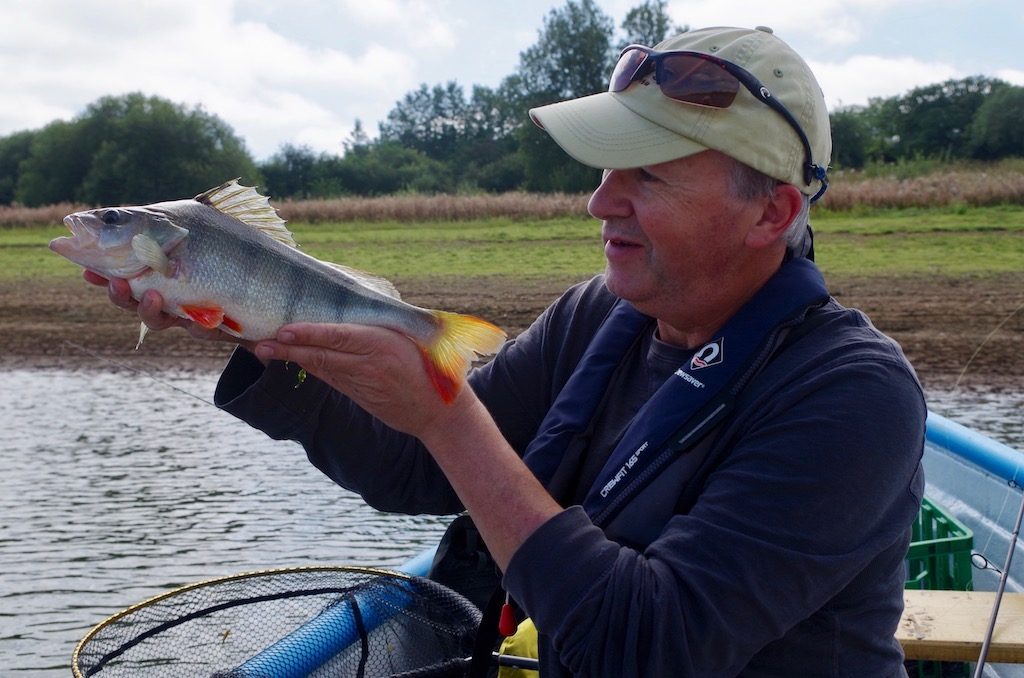 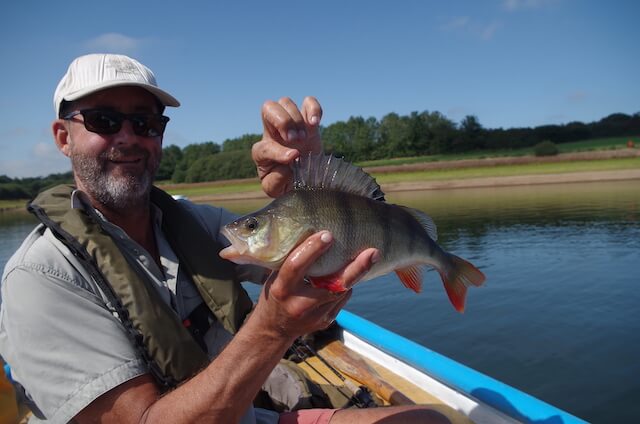 As the day progressed we listened intently as the Ashes Test Match progressed with victory for England seeming increasingly unlikely.

Mid-afternoon and we decided to head to the café for refreshment. The Test Match continued with England down to just one wicket. Half an hour later as we headed to the lake the cricket continued and our focus turned increasingly to the drama of the Test match.

We fished in the bay dropping our lures in search of perch whilst listening intently to the unfolding drama of the Test Match. When Ben Stokes hit the winning runs we both shouted out across the lake in unison to celebrate an unlikely victory for England. Moments later Bruce’s rod bent as a large weight tugged at the end of the line. Instead of a monster perch up came a brace of two pounders, one on the slow jig and one to the drop shot lure! 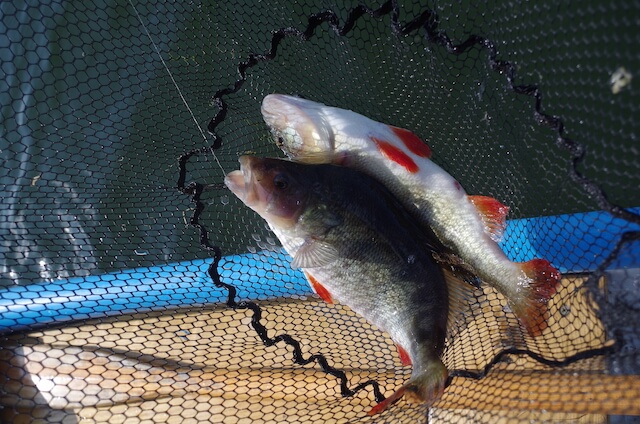 Does life get much better ?

We searched the lake for more perch as the evening approached. With little success we returned to  the bay where we had enjoyed success earlier in the day. As the light faded Bruce hooked a very large fish on a small plug that came off after a few moments. We were convinced that this would have been the biggest fish of the day. The next half hour proved frustrating as perch hit the lures without getting hooked. Judging by the swirls and heavy thumps on the rod these were big fish.

Hopefully there will be further trials and if there are we will be back in search of the big specimen perch that undoubtedly lurk within this vast water. Strangely we caught no trout on lures reinforcing my believe that the fly is often a far more productive method for tempting trout.