Skip to Main Content
Many thanks to Daniel Welch for sending this superb report on a truly epic days fishing.
Fishing is so much more than just catching a fish. It’s about the preparation, anticipation, the journey, the wildlife and the environment that surrounds you. It doesn’t matter how well prepared you are you never know what the result will be. Little did we know this trip was going to be one of those really special unforgettable ones.
Last Sunday the weather and tides were just right to go on the hunt for what some one say is one of the UKs ultimate fish, the porbeagle shark!
The alarm was set for 03:30 and we left harbour on high tide in the dark, the lights of the town and faded into the distance as we steamed out. As the first glimpses of daylight arrived the silhouette of the land began to appear and the surface of the sea shimmered, the conditions looked promising. We arrived at the chosen location a couple hours later.
3 shark rods were set at various depths all rigged with barbless circle hooks suspended beneath brightly coloured bottles. There were a lot of dolphins and a number of whales in the area surely this was a good sign. After a short wait the middle float disappeared and we hooked into the first shark of the day it was by no means big by porbeagle standards but a nice shark around a 100lb photos were taken and the fish return. We had a few more takes over the next couple hours and landed another two sharks and lost one and saw others cruising around beneath the boat in the crystal clear water.
Whilst fighting one shark there was a sudden commotion about 20m from the boat it was a shoal of skip jack or bonito sized tuna jumping clean out the water hitting bait fish, we could not believe our eyes. I frantically grabbed a lure rod and cast at them hoping one would grab the lure. Within a blink of an eye they vanished back into the depths and my focus returned to landing the shark. We were elated not only had we landed some of our target species we had also seen and come close to getting a tuna. Our expectations for the day had already been surpassed.
As low water approached fishing slowed down. We had been hearing load splashes and a commotion long way from the boat. As time past these got closure until we could actually see what was going on, it was huge feeding frenzies. The feeding frenzies got closer and closer until they were just a mile or two from us at this point we had to go and investigate. We steamed out at full speed to get out to the feeding frenzy before it moved again. When we arrived we came across an incredible site of multiple whales, dolphins, hundreds of sea birds, sharks and what we believed tuna feeding. Neither of us had seen anything like this before. We cast lures into the feeding frenzies and put whole mackerel baits in. Ross suddenly hooked something on a lure only for it to be ripped off the hook we then saw another shark beneath the boat and then the rod I was holding which had a whole mackerel bait was taken and it ran off at speed, it turned out to be a hard fighting male porbeagle. By the time I landed the shark the feeding frenzy had gone quite and we were left with a couple dolphins and whales around the boat and slick smooth water created by the fish oils released during the frenzy. We were so privileged to witness this off our own coast line and chances are it’s a once in a life time experience. We are just glad we managed to capture some photos and film to share without preconditions friends and family.
We hung around a bit longer but had no more bites so decided to worked our way back home fishing wrecks and reefs on the way back. We caught a number of bass and even a John Dory doing this.
In total we landed 4 sharks and lost one, the largest shark was estimated at 150lb. An incredible and almost unbelievable day! Ross summed it up saying “you don’t normally hear epic and fishing in the same sentence but today was truly and epic day”. 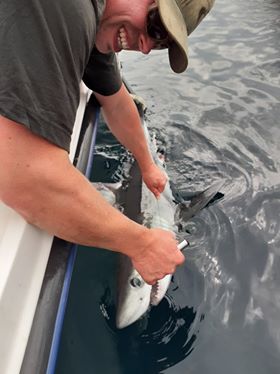 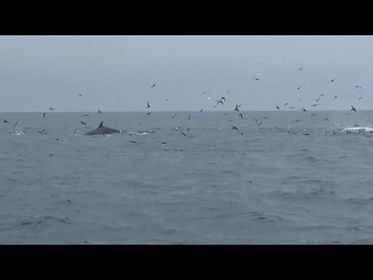 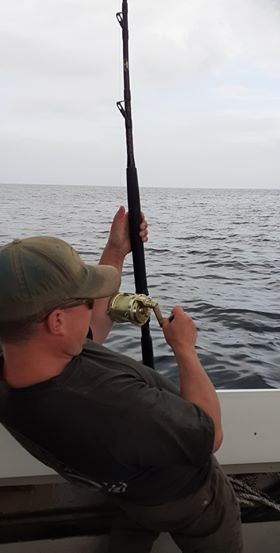 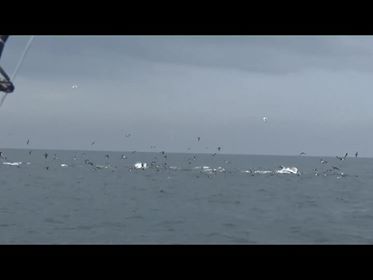 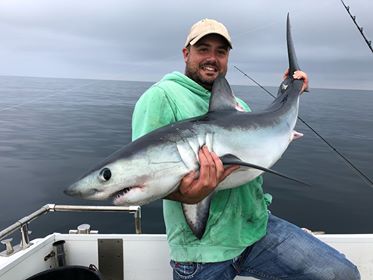 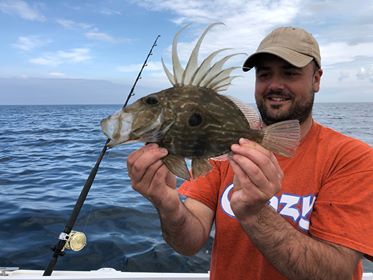 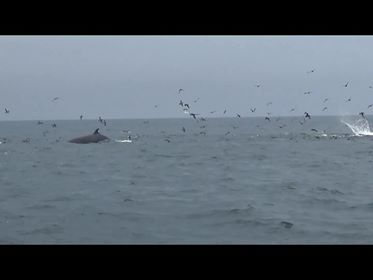 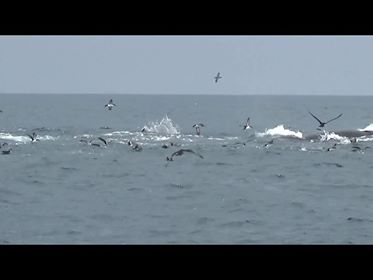 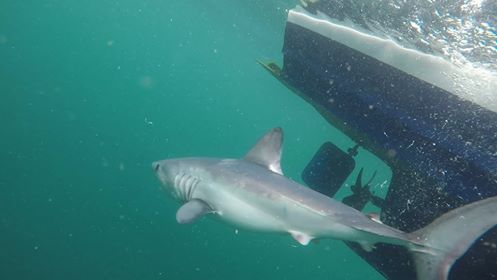 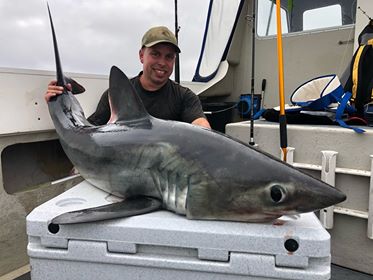 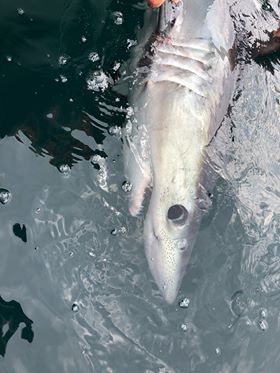 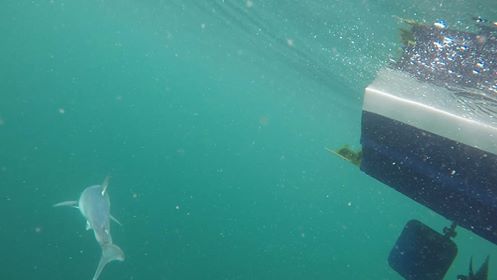