I have followed the debate surrounding the re-introduction of beavers with interest over recent years. Re-wilding is in vogue at present with a drive to bring back a wide range of species including white tailed eagles, beavers, storks and even lynx and wolves.
On the face of it resurrecting many of the species that once roamed the lands of the UK is commendable. Let’s face it we have done an awful amount of damage over the past 400 to 500 years. Taking a look around Waterstones bookstore the shelves are packed with commendable books on the joys of nature, re-wilding and climate change. Perhaps COVID has refocused many minds onto the more important aspects of life that anglers have been appreciating for hundreds of years? It’s as if the greater majority have suddenly woken up to the damage we have inflicted on nature and the planet and want to rush to put it all back as it was without considering that we have lost many pieces of the jigsaw. I am no scientist so my views are that of an observer who enjoys the countryside. I know that eco-systems are extremely complex and the creatures that live within are often inter dependant on other species and the vast range of flora and fauna that grows within.
The re-introduction of species is perhaps different to invasive species imported from foreign lands. Grey squirrels, mink, signal cray-fish, Himalayan balsam are a few that spring to mind.
It was with this cautious view that I attended the Beaver talk at Bishops Tawton Village Hall. As an angler one concern I have is that beavers might impair upstream migration. Chris Jones delivered a fascinating presentation about the reintroduction of beavers and I left the meeting erring on the side of reintroducing these huge rodents. The benefits they could bring seemed to outweigh the potential negatives. Beavers apparently live in harmony with salmon in Norway on some of that countries prime salmon rivers. They are now also widespread in Scotland on the River Tay where Miss G.W.Ballantine landed the British Record salmon of 64lb in 1922. Surely if beavers have been introduced there then far wiser persons than I believe that they are beneficial?
Many thanks to Don Hearn who also attended the meeting for allowing me to publish the report (Below) that he wrote for members of the Barnstaple & District Angling Club. I hope to learn more about the project in the coming years when perhaps I will catch a glimpse as a beaver swims past whilst I cast a fly for salmon on the Taw or Torridge.
I attended the meeting in Bishops Tawton regarding Beaver introduction in Devon.
Chris Jones is a founder member of the Beaver trust and has successfully introduced beavers on his farm near Truro. They have managed to alleviate flooding in his area and The figures and flow charts produced by Exeter university are impressive. The proposal is to introduce Beaver into the Caen catchment above Braunton to help with the Caen flooding problem. Our interest lay in the fact that they do populate other areas in time ,and without predators can do well, as they have in Scotland. They may even come up the Taw in future and i understand one has been caught in a camera trap much higher up. There is no suggestion they could populate the lower Taw but would have to be upriver and probably in tributaries. This could all be many years away and would have no effect on the Taw in the foreseeable future. I canvassed the E.A. on their opinion but the consultation has been led by DEFRA. I understand there will be a decision in 3 months with a licencing and long-term management plan to follow. The meeting was titled “Beavers in Bishops Tawton” and was well attended but there was no question of that happening. Wayne Thomas asked about dams impeding migratory fish and was assured they can still get through and haven’t been affected in other rivers. More info about this is available if you google “final report of the beaver salmonid working group” . Clearly A lot of research still needed . Chris Jones has invited us to view his land and beavers near Truro and this can be arranged via ” The Beaver trust” site. I hope to visit it myself in the near future with other interested members.
Regards
Don 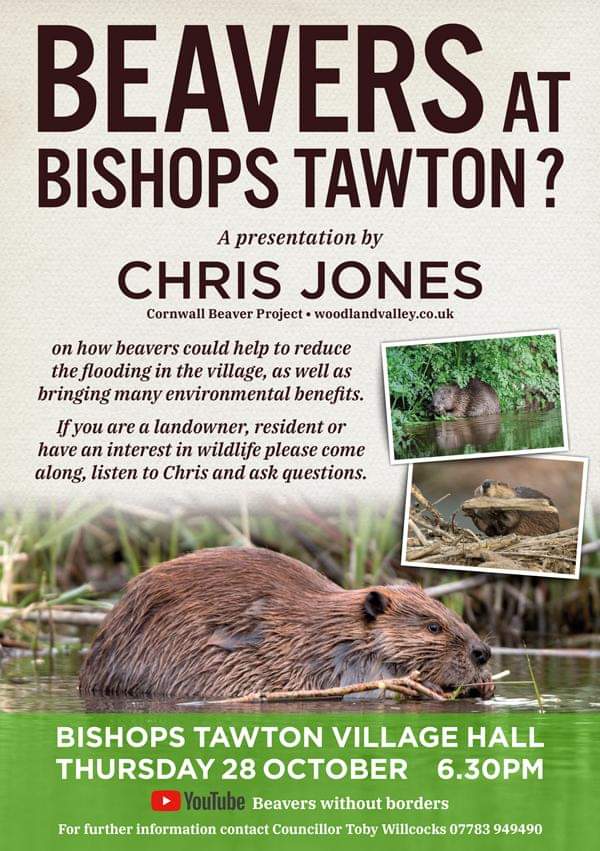