ARTIFISHAL is a thought provoking film that everyone should see that has concern for the natural world.Be Informed :-
Open net fish farms threaten the survival of wild fish including Atlantic salmon, sea trout and Arctic char but governments are not doing enough to address the problems. Instead the industry is set to expand exponentially in the pristine fjords of Iceland and continues to grow at alarming rates around Norway, Scotland and Ireland – using massive open net pens that allow the free flow of disease and pollution into the surrounding environment where wild salmon are struggling to survive. In the last 40 years, the population of Atlantic Salmon has dropped from 10 million to 3 million and if we fail to protect their habitat they could soon become an endangered species.

The film will be introduced by Wayne Thomas and screening will start at 7.45pm the film will be followed by an interactive discussion. Wayne will also give details of his new book on angling in North Devon with the opportunity to purchase signed copies.
Note 50% of profits will be donated to the River Torridge Fishery Association. Tickets £5.00 on the door. 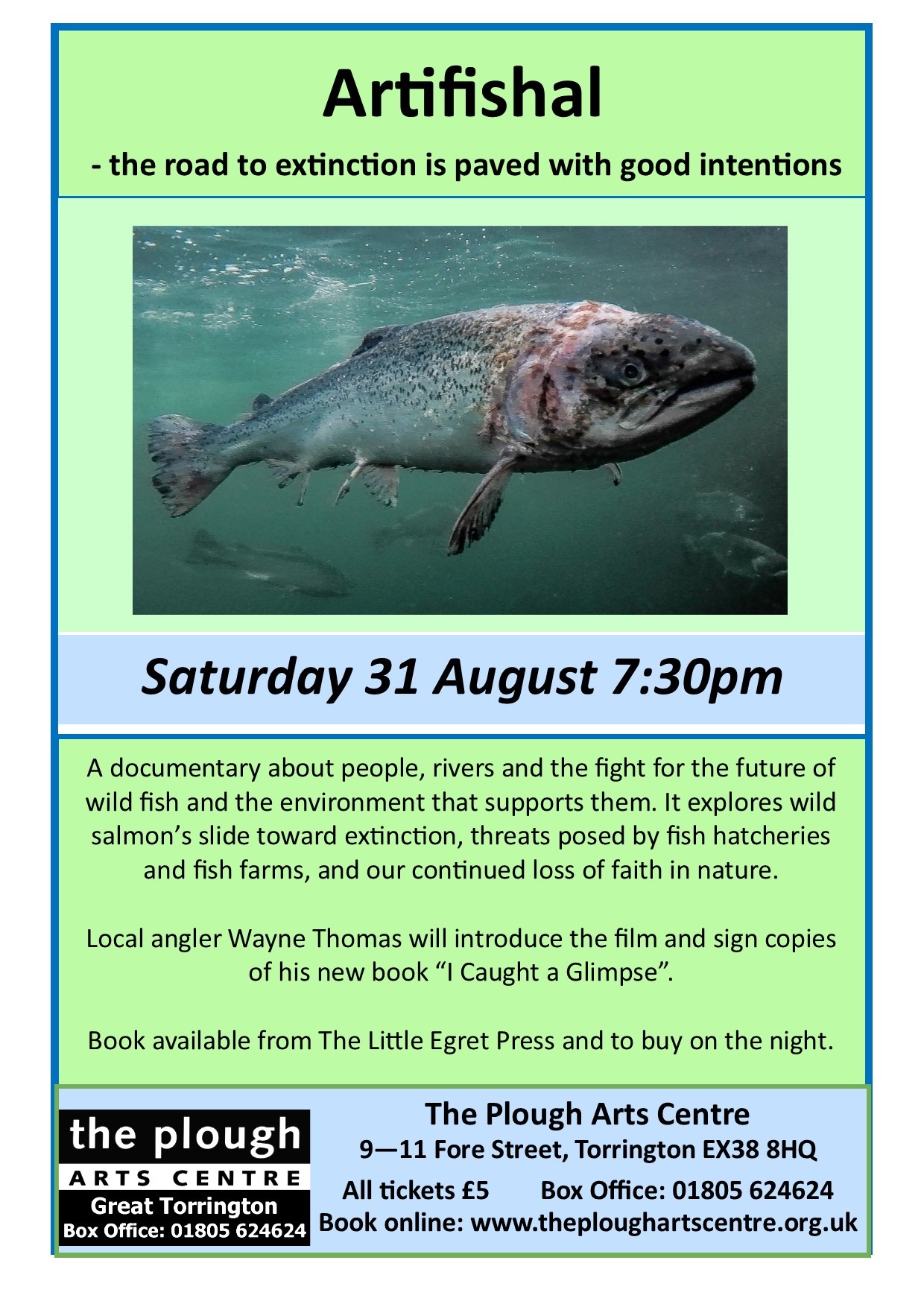 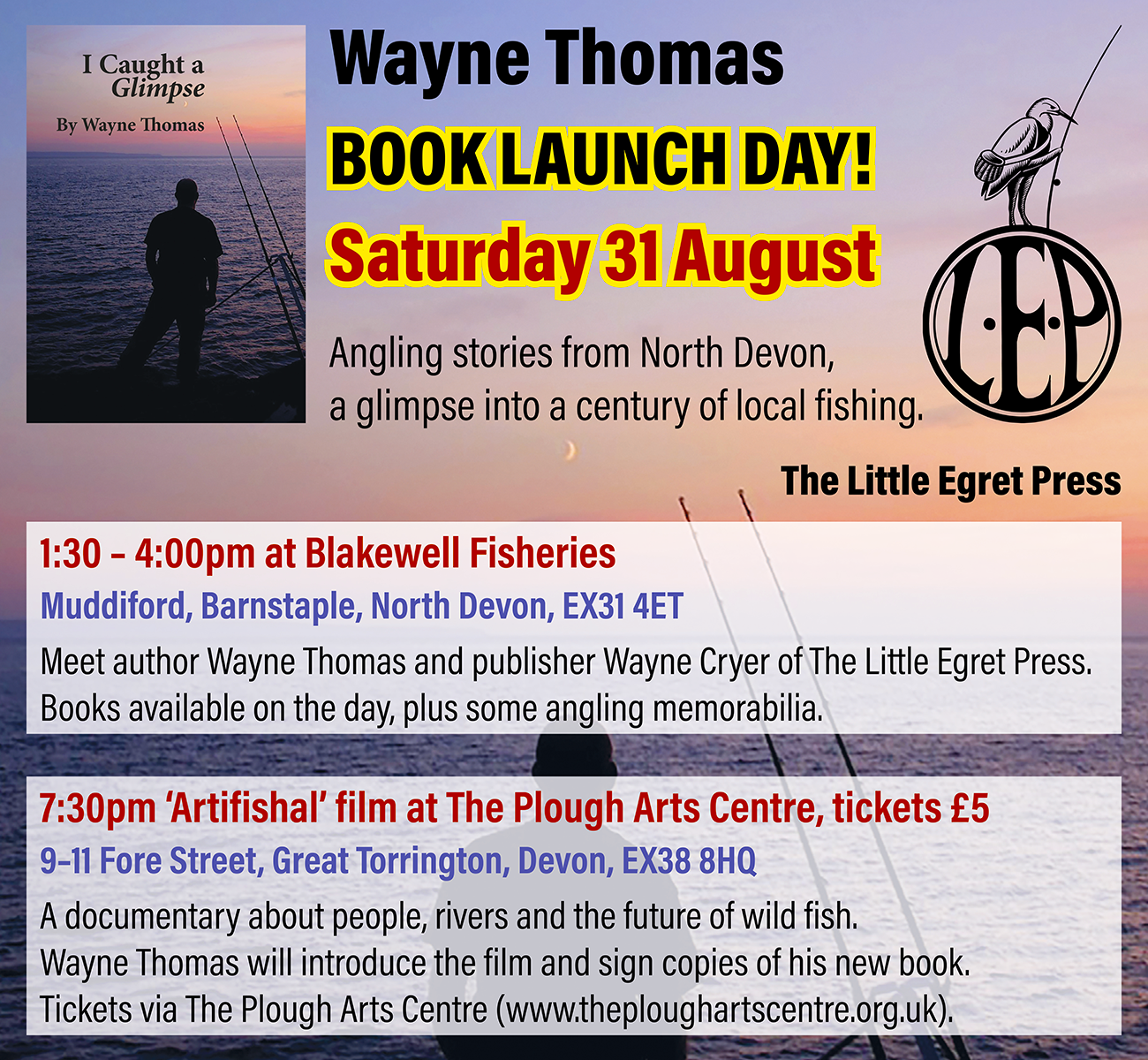 I received this email today from James Barlow. I have decided to share  here on North Devon Angling News website because I share the concern regarding salmon farming and its devastating impact upon salmon, sea trout stocks and the wider impact this has on the environment. I have visited the West Coast of Scotland and talked to local people who have witnessed the dramatic decline in salmon and sea trout numbers. We have seen dramatic declines in the West Country but not as rapid as seen in parts of Scotland. In Norway I caught cod and halibut with their stomach contents packed with pellets. The water on calm nights shimmered with oil that I believe came from the waste from these farms. The cod and coalfish we caught were also carrying large numbers of lice.

As anglers we all care for the long term future of fish stocks for we have a vested interest in one sense in that we want to catch fish but also because anglers care about fish and the environment in which fish live.

This July I assisted in the rescue of 75 salmon from a local estate after over 100 wild fish had already died. We believe the deaths were exacerbated, if not caused, by lice infestation from local salmon farm cages in Loch Roag, Isle of Lewis. The regional Fishery Trust biologist recorded between 500 and 700 sea lice, a parasite, on several live fish between 5-8 lbs. These wild fish are literally being eaten alive. My photos from the first day can be viewed here.

‘The One Show’ episode is available to watch on iPlayer until 18/10/18. The relevant article commences at 3 mins 10 seconds and runs for 9 minutes.

They highlight the plight of farmed salmon in cages which, like the wild fish, are suffering from appalling predation by lice. Last year, of the 208 salmon farms in the UK, 82 farms declared that they had exceeded the statutory Government acceptable limits for sea lice – that is 39.4% of all UK salmon farms.
Due to transportation costs, for the past two years the Scottish Salmon Company, proprietors of the farm in Loch Roag, has been burying thousands of dead fish (morts) in a ‘temporary’ landfill site in North Uist.

In the summer of 2017 over 175000 fish died of disease or attempted treatment at salmon farms in the Hebrides (The Telegraph). If this mort rate, or the effect of their farming methods on wildlife, were to occur to a mammal or on land the public outcry would be deafening, I’m sure. On average Scottish fish farms expect a mortality rate of around 23% of their stock. Such a high death rate would not be tolerated in any other form of animal husbandry.

Please take the time to view the programme and decide for yourself whether this is a quality product which you are happy to eat or serve to your family. Even ‘organic’ salmon can be treated with antibiotics yet still receive certification. EU regulation states that, “chemically synthesized allopathic veterinary medicinal products including antibiotics may be used where necessary…”. While ”excessive” treatment can result in removal of the prestigious Organic certification fish may still be treated under veterinary guidance then sold as ‘Organic’. Standard farmed salmon are regularly dosed in an attempt to ameliorate their condition. When you watch the video it will be clear why this is necessary.

Thank you for taking the time to consider this request. If you have any questions I will endeavour to answer them to the best of my ability.
Further video and photographic evidence can be viewed via this link to a Salmon Fishing Forum thread – ‘Sad, Sick Salmon both Farmed and Wild’. My contributions are under the username ‘Lewis.Chessman’.

If you feel sufficiently moved, please forward this mail to your friends and family. This industry will not change its methods unless its profits are threatened by consumer pressure.

My thanks to you all,