Reports of catches from the open coast seem to have eased off since the dawn of the New Year which is no surprise for several reasons. The calm weather and high pressure has resulted in water clarity increasing this tends to ensure that fish move into deeper water. During rough weather many species move close inshore to feed upon food that is dislodged by the rough sea. Shoals of bait fish are also broken up during rough weather and the prey also become harder for predatory fish to see which may encourage these fish close inshore to search for alternative food. Remember fish are basically interested in two things; sex and food! The other factor is of course a reduction in angling effort as most have gone back to work after the Christmas break and those that do fish tend to be the dedicated few who do not always share their catches on social media.

I decided to head out onto a rock mark I have not fished for a few years determined to see what was about and to ensure I keep a bait in the water. I like to get out at least twice a week throughout the year. It was exceptionally calm when we arrived at the chosen venue and I could see that other angler’s lights were shining out from other rock marks in the area. As always I wondered how they were fairing and whether our choice of mark would reward us.

It’s always good to arrive at the water’s edge and make that first cast of a session. On this occasion I baited with a decent hookfull of freshly frozen herring caught during last week’s visit to Torquay. (See earlier feature http://www.northdevonanglingnews.co.uk/2019/01/06/squid-trip-brings-glittering-bonus/). Before I had the second rod baited the ratchet clicked and the rod tip rattled. Picking up the rod I leaned into what felt a weighty fish. To my dismay I immediately became snagged. Placing the rod in the rest I baited the second rod and put that out before once again trying to extract the fish from the snag. A steady direct pull resulted in  a slow release of tension as the tackle pulled free. Lifting the rod I was pleased to feel a weight on the line. Moments later a conger and a large stem of kelp arrived at the surface. I scurried down to the water and grabbed the heavy wire trace lifting the eel of around 9lb onto the rocks. This is a big benefit of using a heavy trace as most fish can be dragged out without use of a gaff or net neither of which are ideal when dealing with conger. 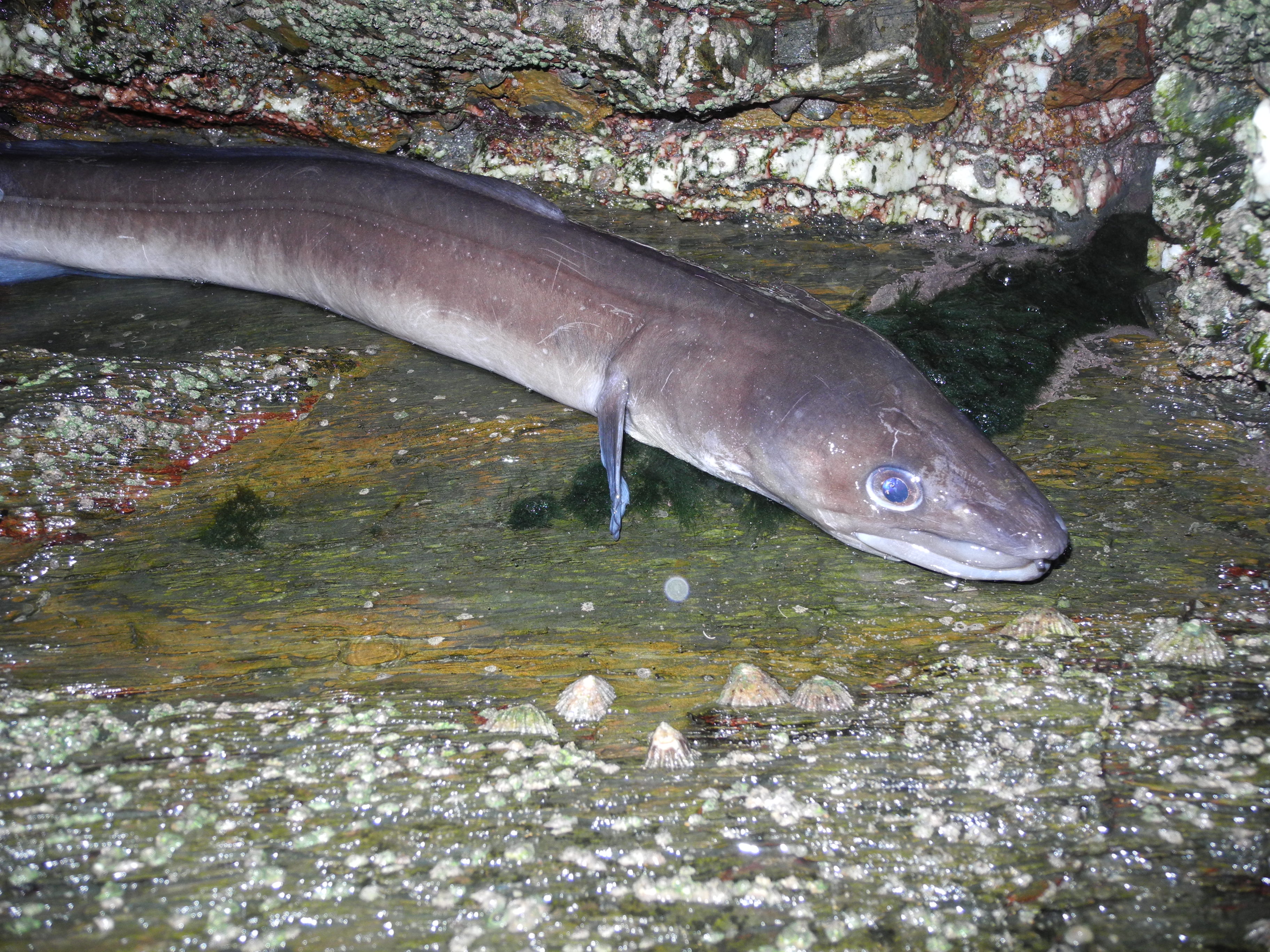 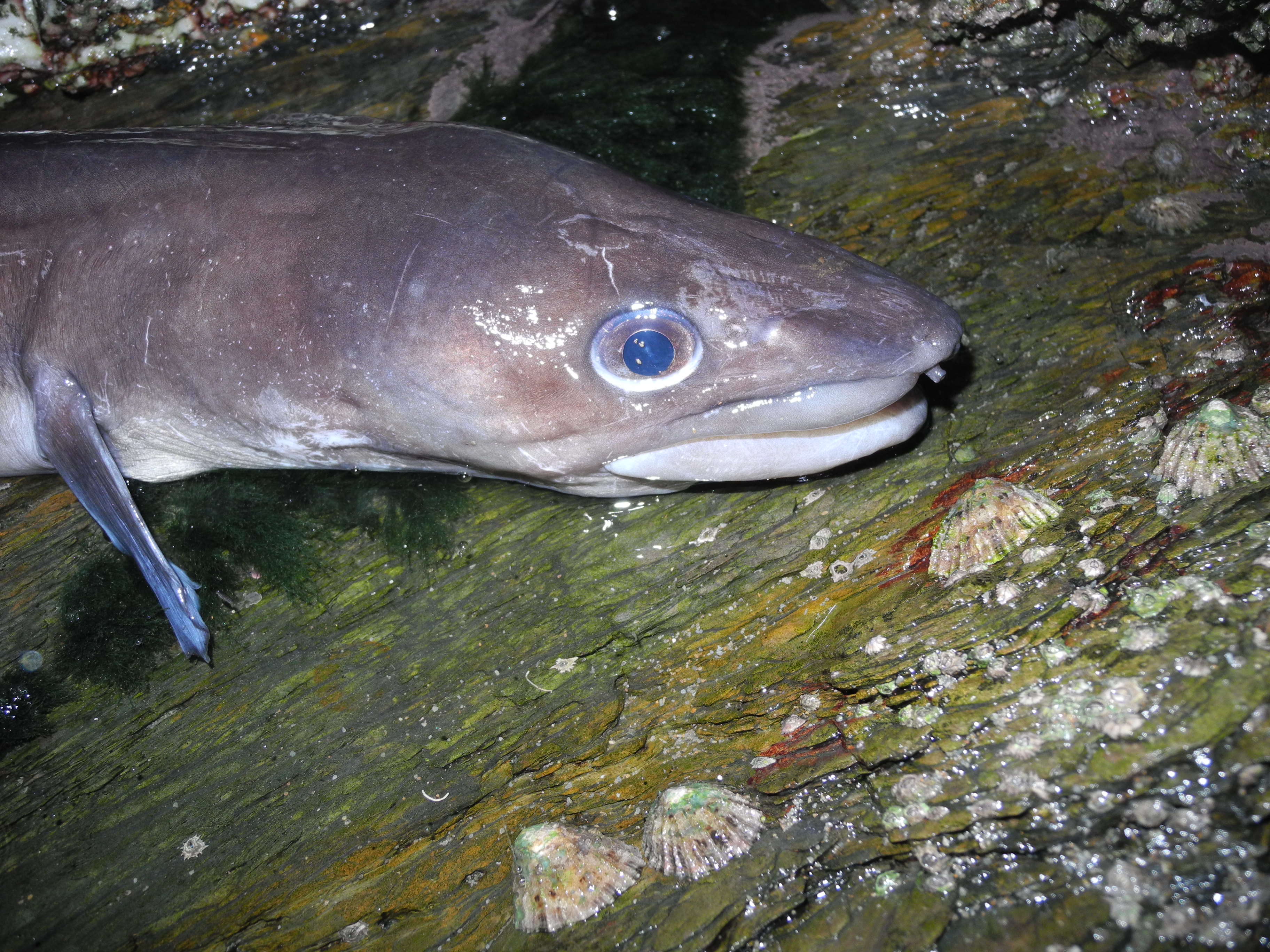 I had expressed that the evening seemed perfect for catching a big eel with calm, mild conditions and a dark overcast sky. The conger were certainly on the feed as the next hour and a half up to high water saw us land around half a dozen more eels, no hoped for monsters but not the dreaded straps we have been catching recently. The session progressed as most do far quicker than one would like and with frequent bites and several lost sets of gear time to sit back and savour the evening was limited. So much so that we were both perspiring as a result of dressing for what we thought would be a cold night. A benefit of Reeds Chillcheater clothing I guess.

Shortly after high water the rod tip nodded decisively as something mouthed the bait out in the dark water. I pick up the rod and lifted to feel a pleasing resistance, another moderate sized eel was what I expected but to my delight a decent bull huss appeared in the clear water illuminated by the headlights beam. To be honest it looked bigger than it actually was as I called urgently for Rob to grab the landing net. To my relief the huss was soon safely within the net. It failed to make double figures but at 8lb 10oz was a pleasing result that proved very difficult to get a photo of as it twisted and turned in my hands. 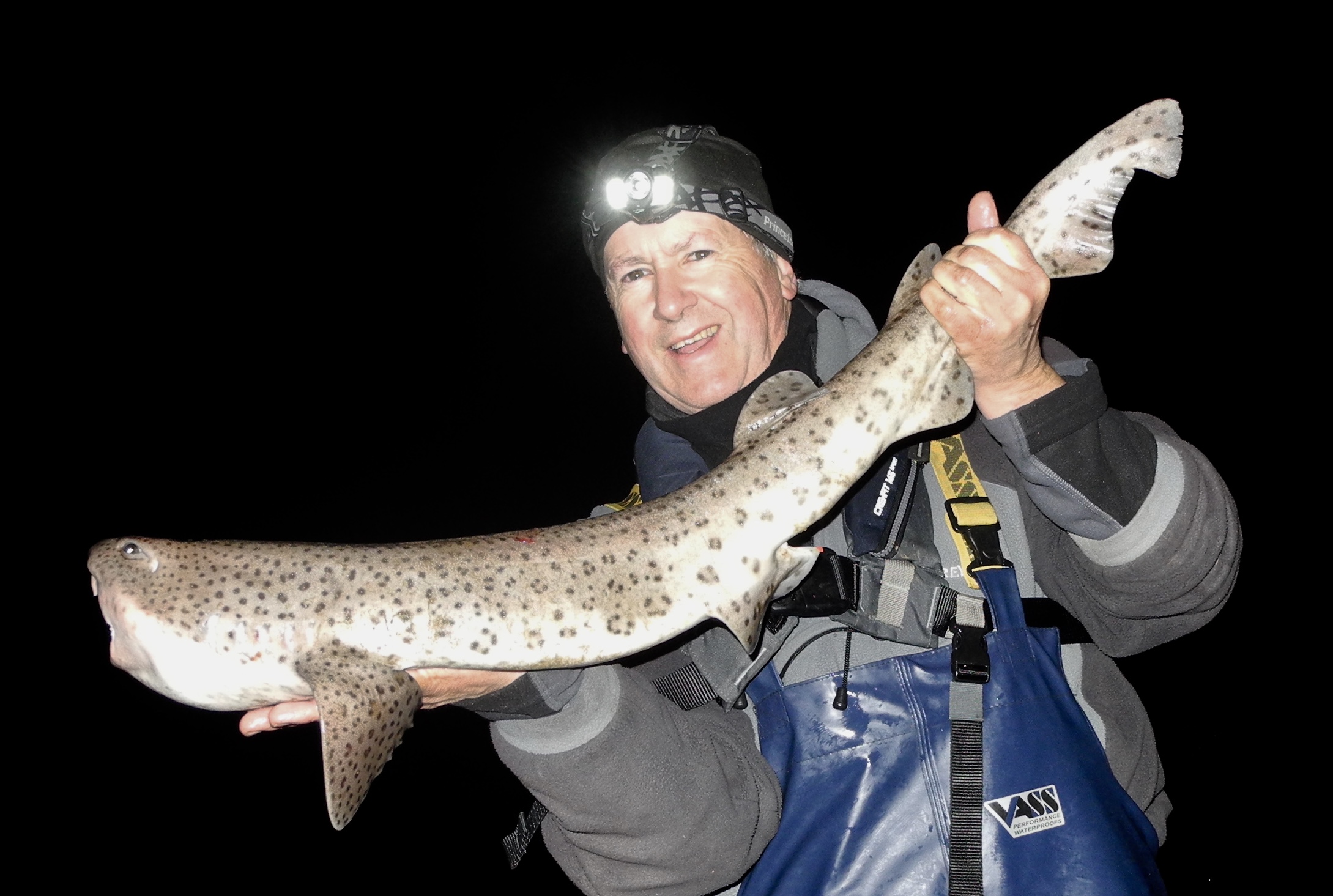 With work the following day it was not going to be a late finish and at close to 11.00pm we packed away the gear and began the steep climb back to the van. As we packed away the gear I recalled dark nights beneath the trees when I had fished there as a teenager forty odd years ago. I am lucky that I still have the energy and drive to continue chasing the fish on winter nights. I commented to Rob that I often hear owls calling from the tree’s here and as the words drifted into the night the distinctive hoot of a tawny owl sounded as if answering with a hoot that he was indeed still there!