As we enter July trout fishing tends get harder going as the water temperature rises and the fish go deeper. I was eager to get out onto Wimbleball before the summer doldrums set in and had arranged to meet with Snowbee ambassador Jeff Pearce for a day afloat.

I met up with Jeff at the boat launching bay just before 9.00am and my spirits were immediately lifted by the enthusiastic banter that was flowing amongst the anglers gathering for a day on the water. I have found that angling has been a great antidote to the widespread doom and gloom of the COVID pandemic.

We were all greeted cheerfully by Trevor the fisheries resident guide and bailiff who is always willing to offer valuable advice on where to fish and what tactics to employ. 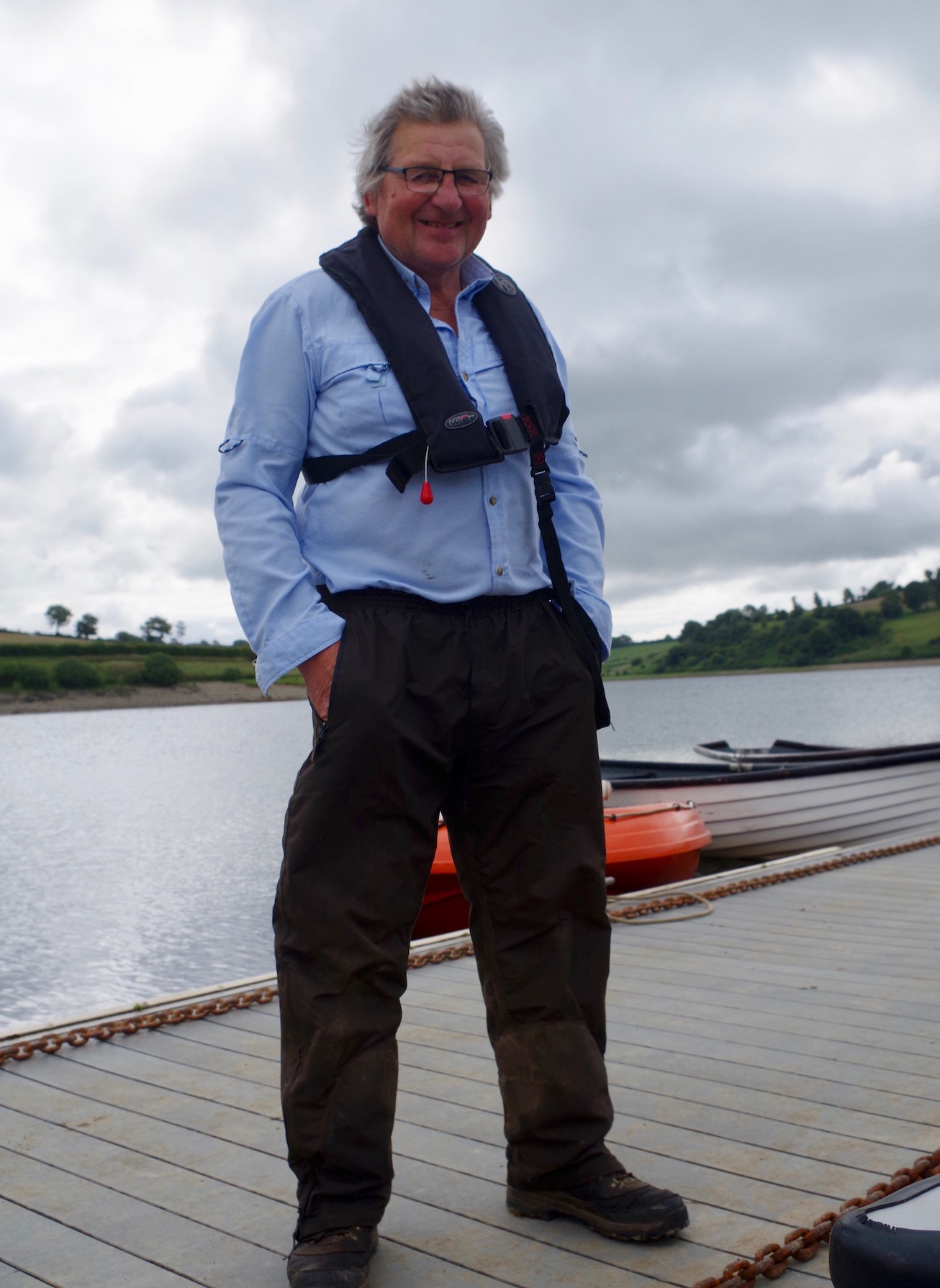 It seemed the perfect day for trout fishing with a moderate westerly breeze and broken cloud cover. If this had been a month earlier teams of buzzers would have been the way to go I am sure but general consensus was now for deeper water and lures.

During the more difficult days of mid to late summer a boat gives a significant advantage allowing a larger area of the lake to be explored. 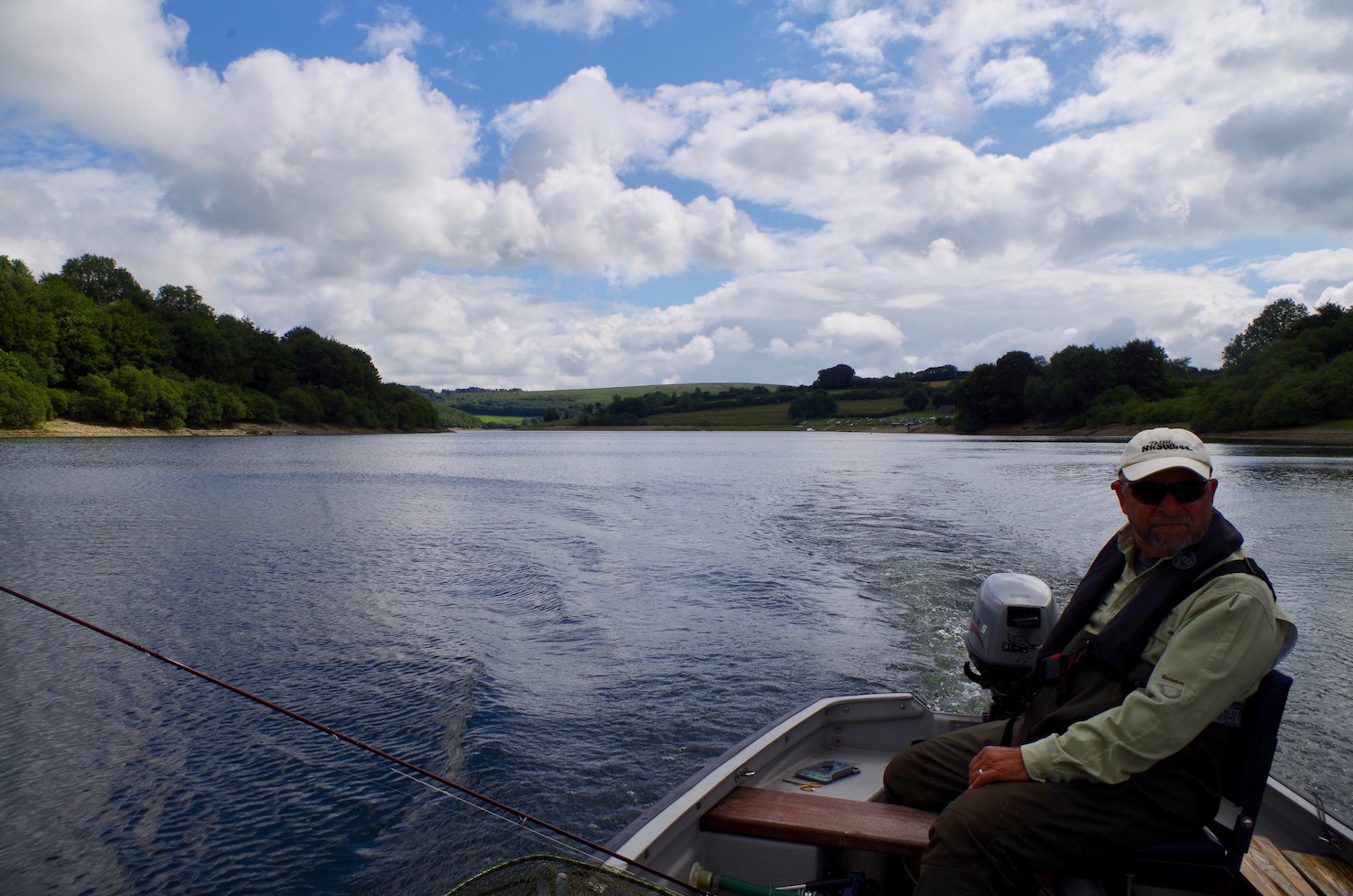 Jeff and I decided on a few casts in the sailing club bay just to get warmed up so to speak. As we drifted slowly Jeff caught a glimpse of a good sized rainbow estimated at 6lb + and put his olive damsel into the area. The fish immediately seized the offering and erupted from the water in a flurry of spray. I grabbed for the camera to no avail as Jeff pulled in a slack line to reveal that the hook had partially opened out. Testament to Wimbleball’s hard fighting fish or a dodgy hook?

I had one trout follow my lure in the bay but after this early success we decided to head out onto the lake proper. The deeper water up near the dam seemed a good idea so it was off to there that we headed powered by the petrol outboard.

Drifting the margins Jeff had the first chance as a trout likened to a tuna chased a damsel nymph to the side of the boat. A few more glimpses of trout brought excited comments from Jeff as we explored the lakes margins that dropped off into deep-water within just yards of the bank.

After a few tentative plucks the first fish of the day was secured. A small handsome rudd of just over 8oz! 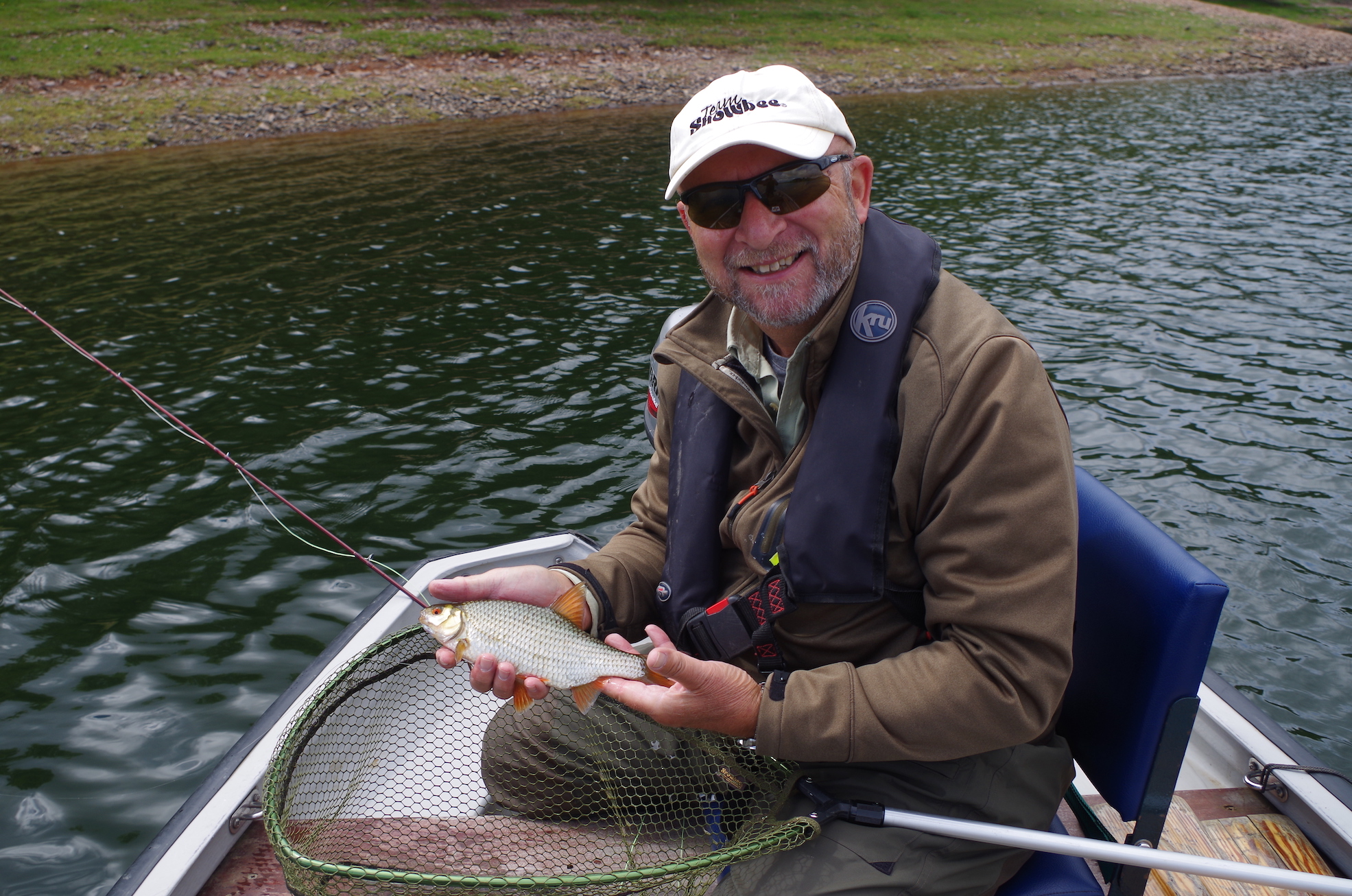 The Upton Arm has a reputation for producing some superb wild brown trout. And so we headed up into this delightfully wooded bay. Drifting with the strong breeze proved a little too fast even with the drogue so we decided to drop anchor at a promising looking spot not too far off the shoreline. I often ponder upon this for when we fish from boats we often strive to get close to shore whilst when we shore fish we aim to put our flies as far out as possible. In truth the margin of the lake is its biggest and most often productive zone. 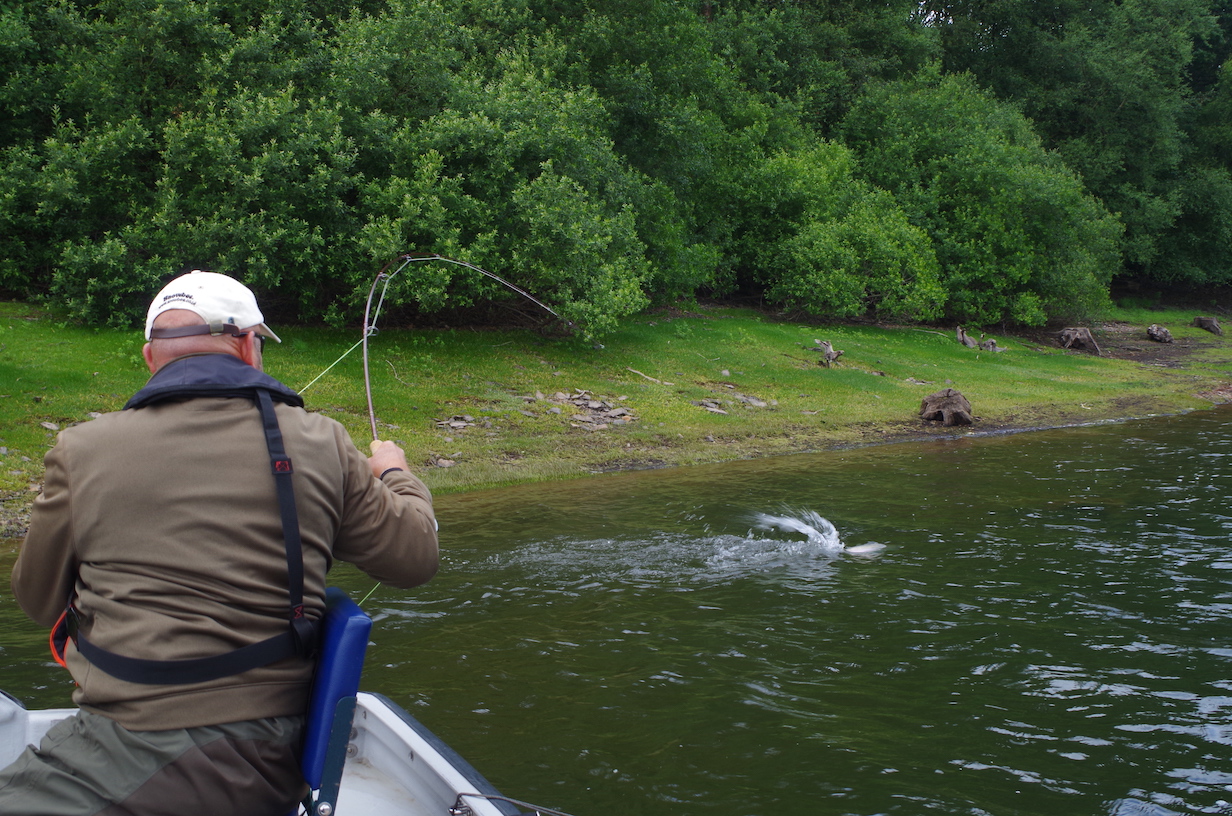 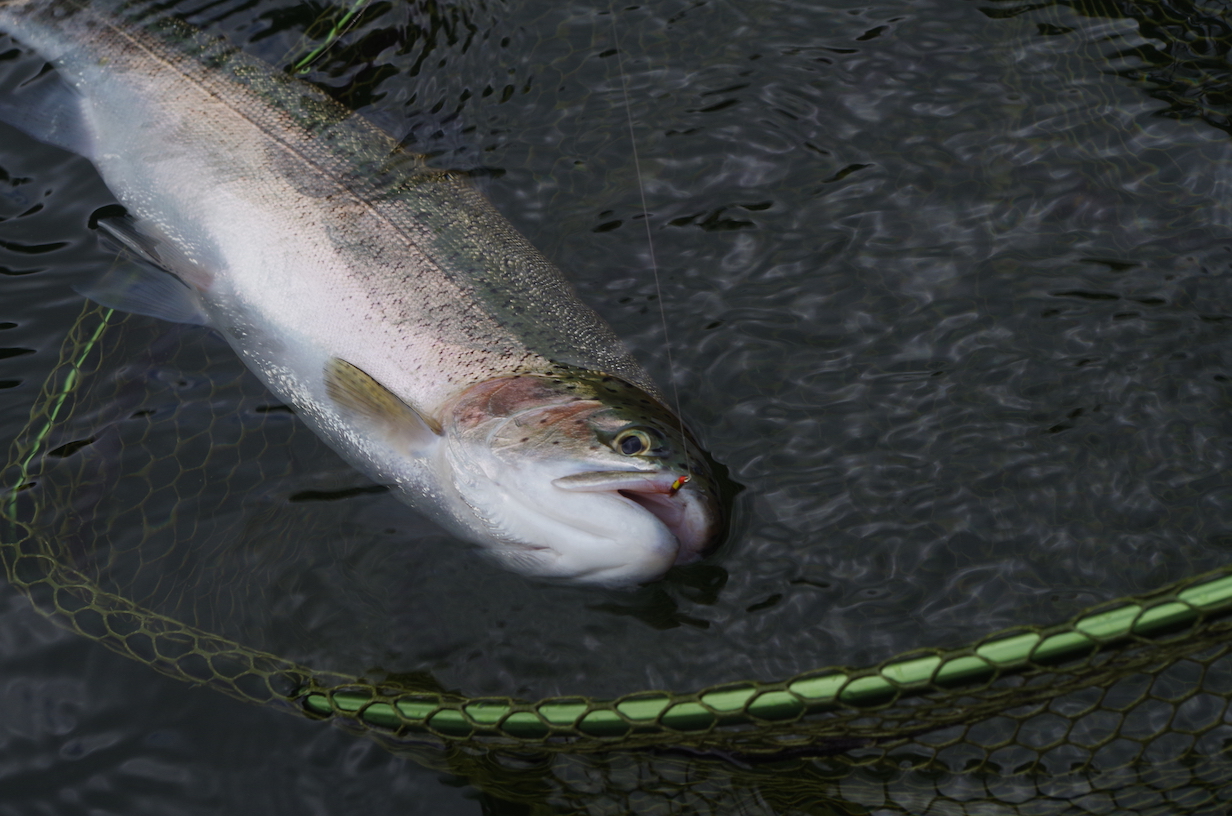 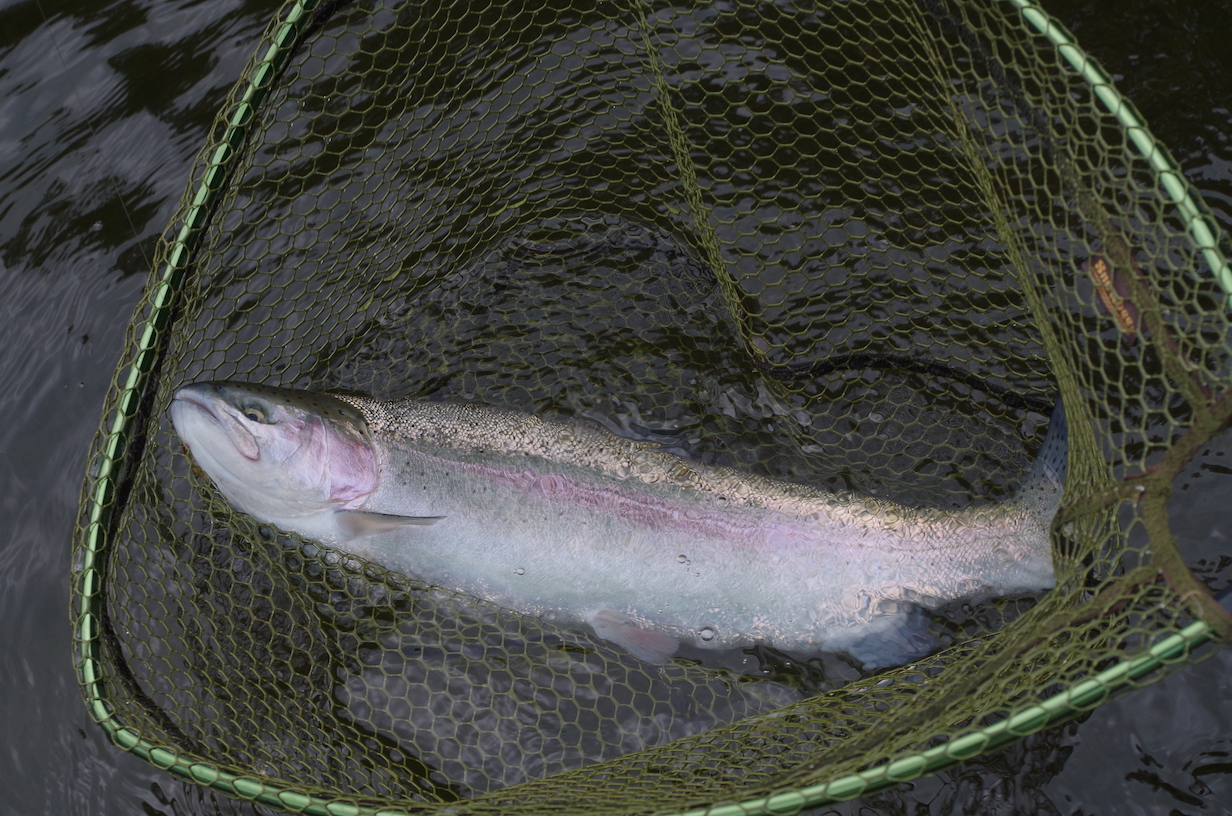 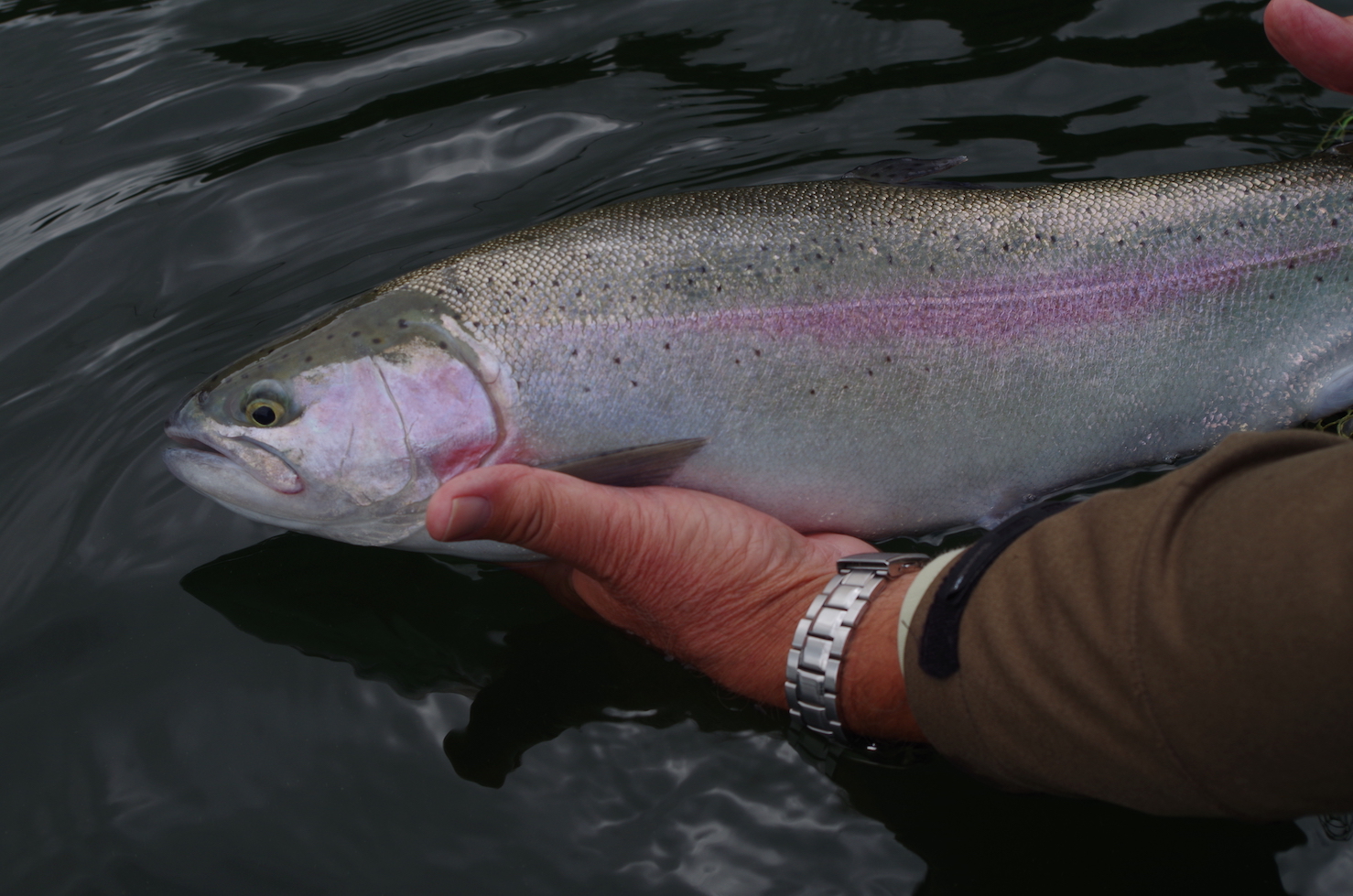 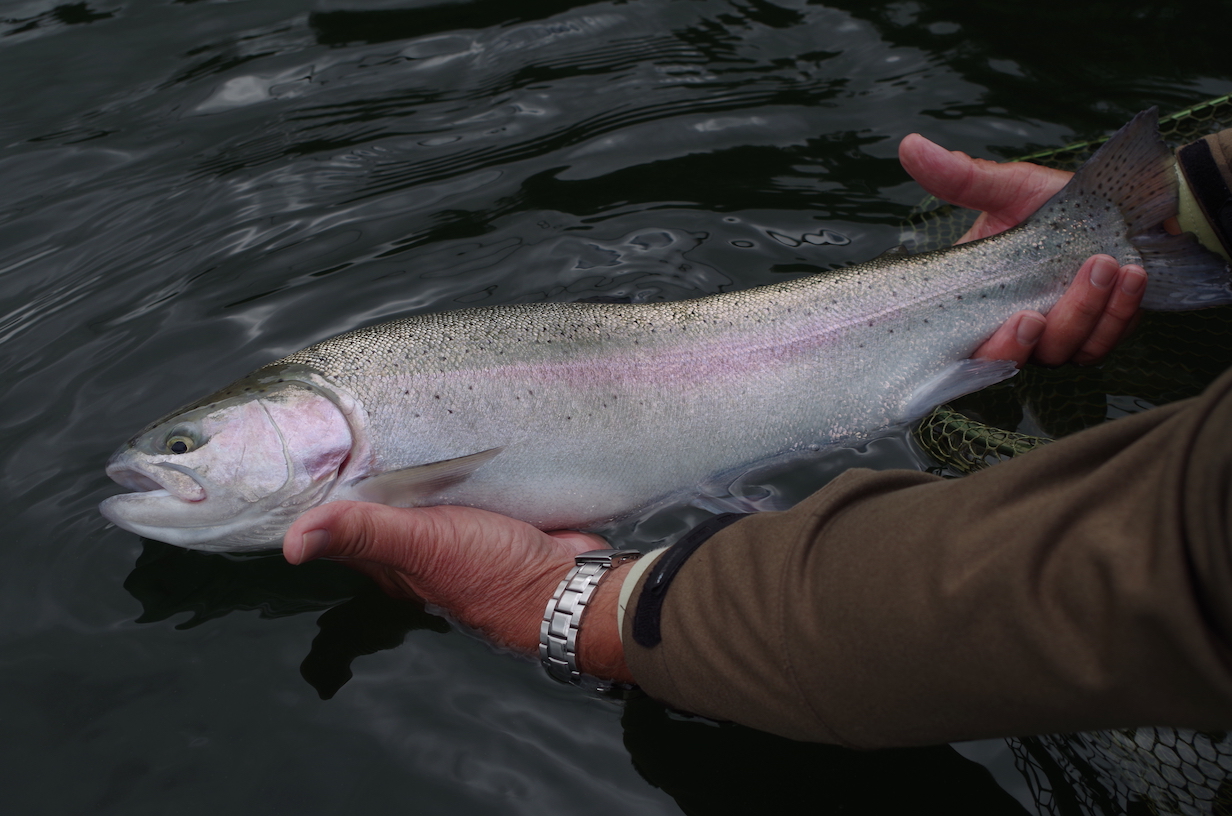 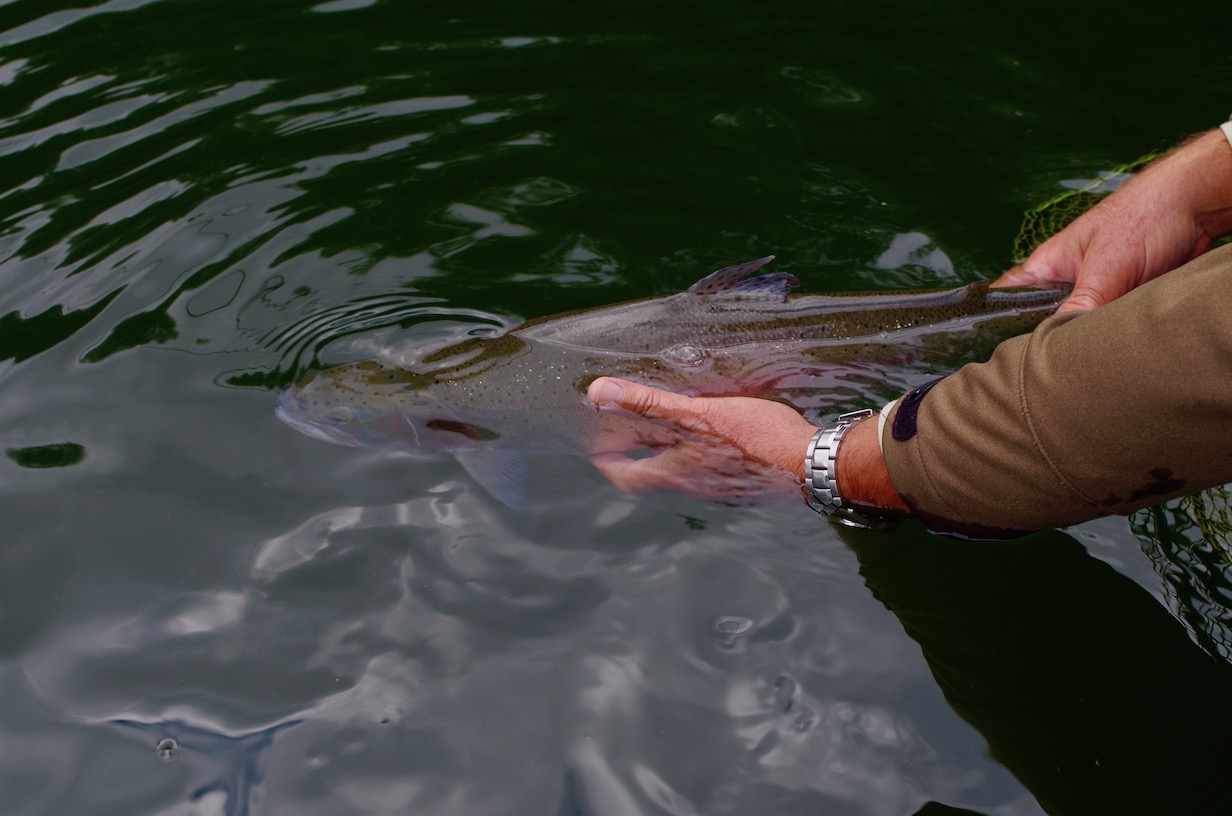 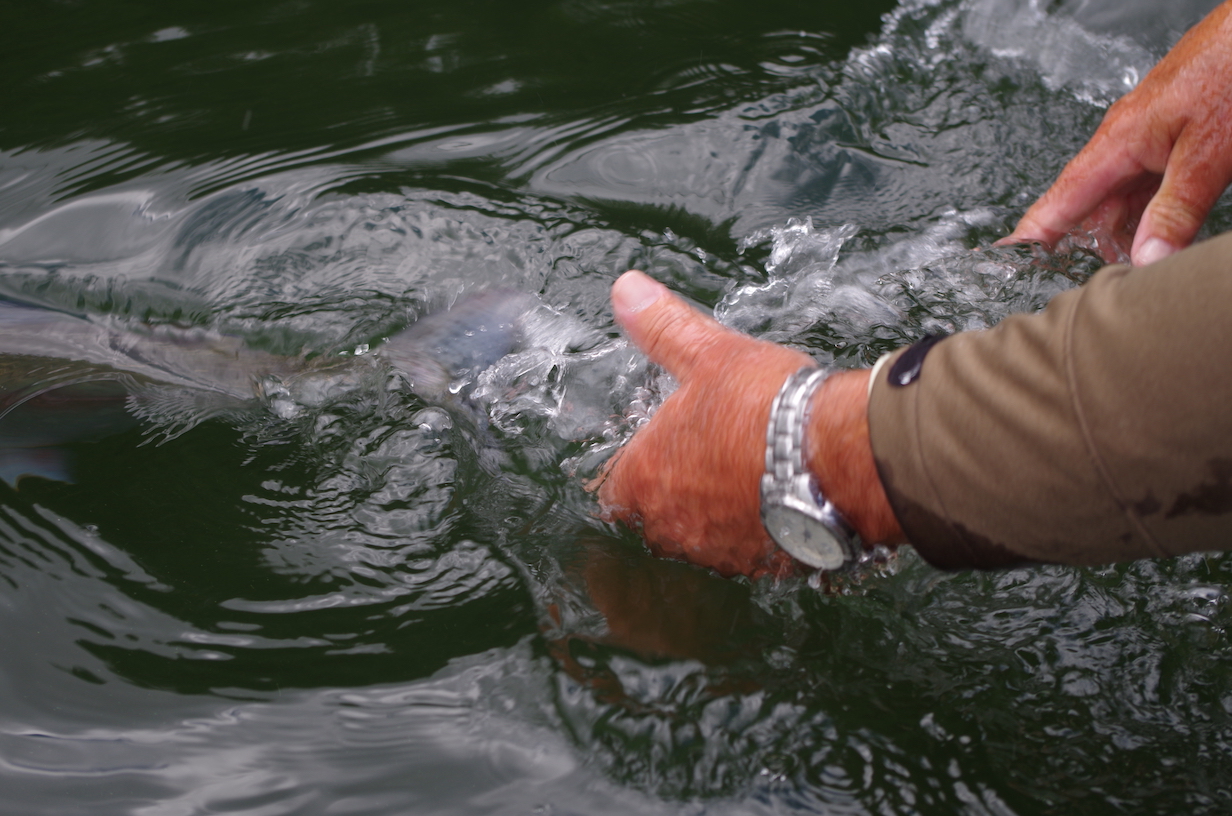 This area soon proved a good call as Jeff hooked a fine rainbow of close to 5lb that used its broad tail to good effect. Over the next couple of hours Jeff added another three rainbows to the tally. I couldn’t get a pull and started to question what I was doing wrong. I was on a sinking line and fishing a damsel nymph whilst Jeff was on a sink tip with using various large nymphs on the point a yellow and red buzzer on a dropper. 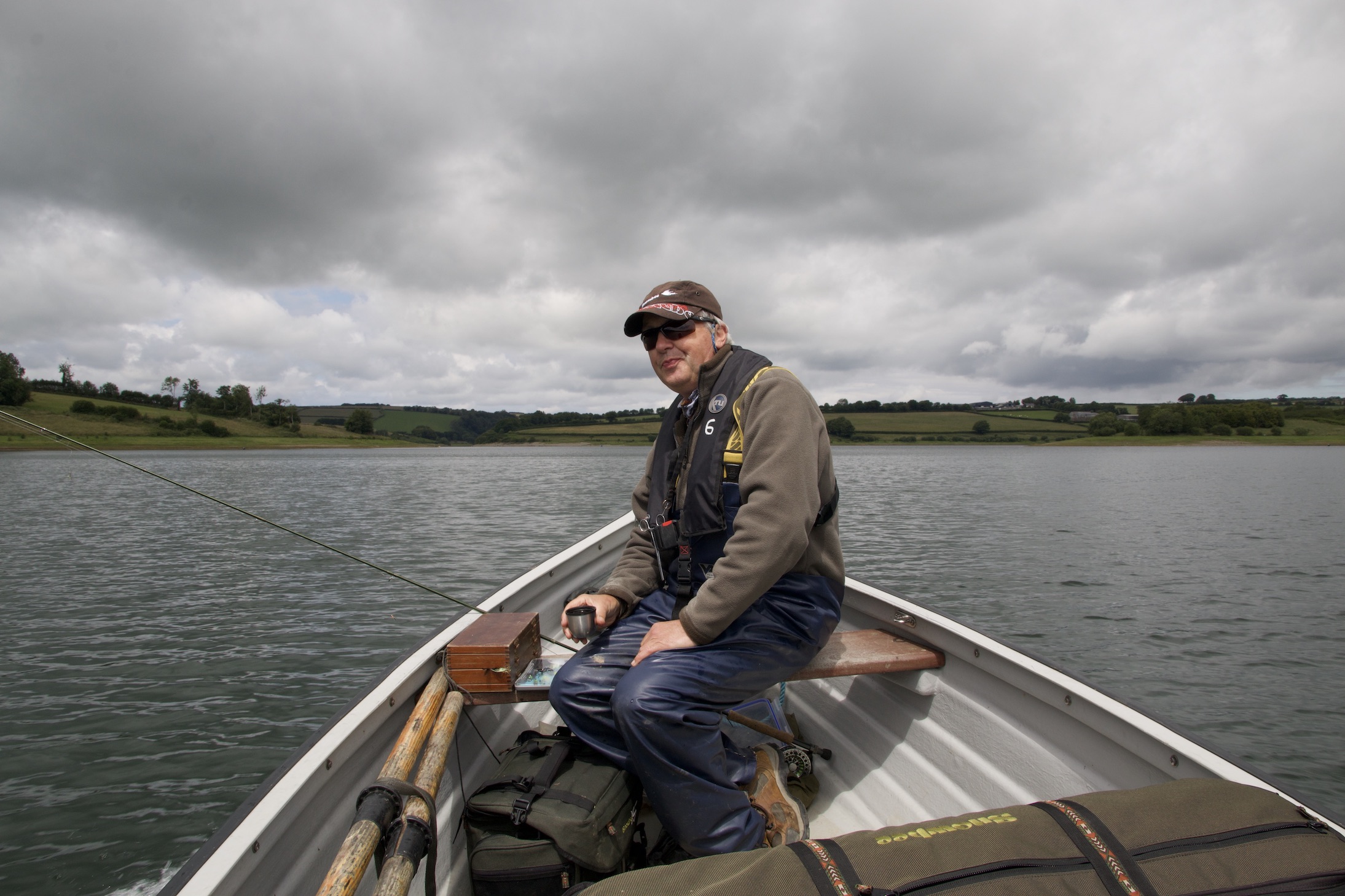 As the fishing eased we decided perhaps unwisely to try elsewhere and headed for the deep water of the Narrows close to some old boat launching steps. Sticking with  the sinking line and a damsel nymph I searched the deep water. Suddenly the line zipped tight and a rainbow of a couple of pounds graced the net. Over the next couple of hour’s we drifted around anchored  for periods and it was me that started to enjoy success adding a couple more to the days total. 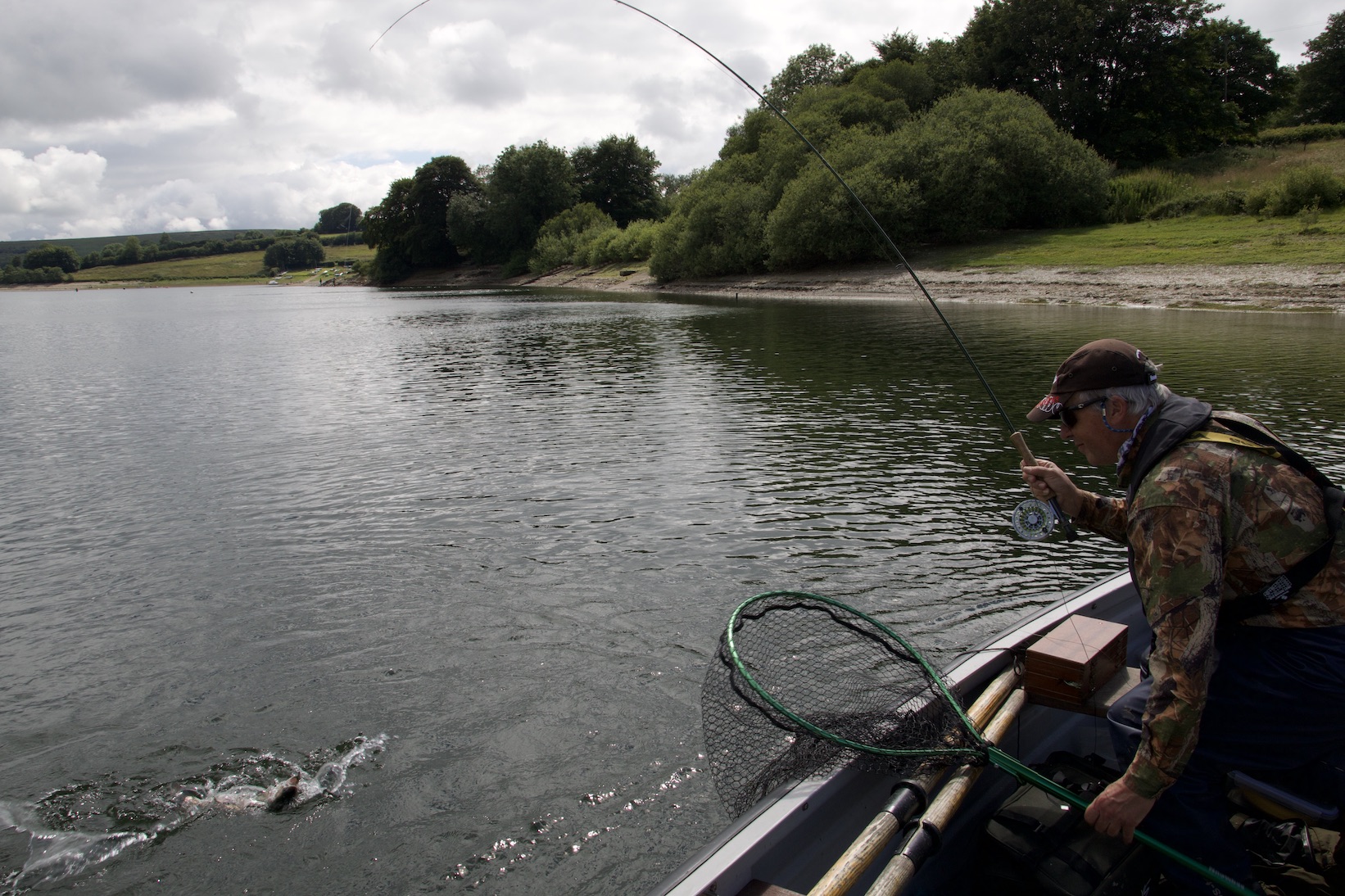 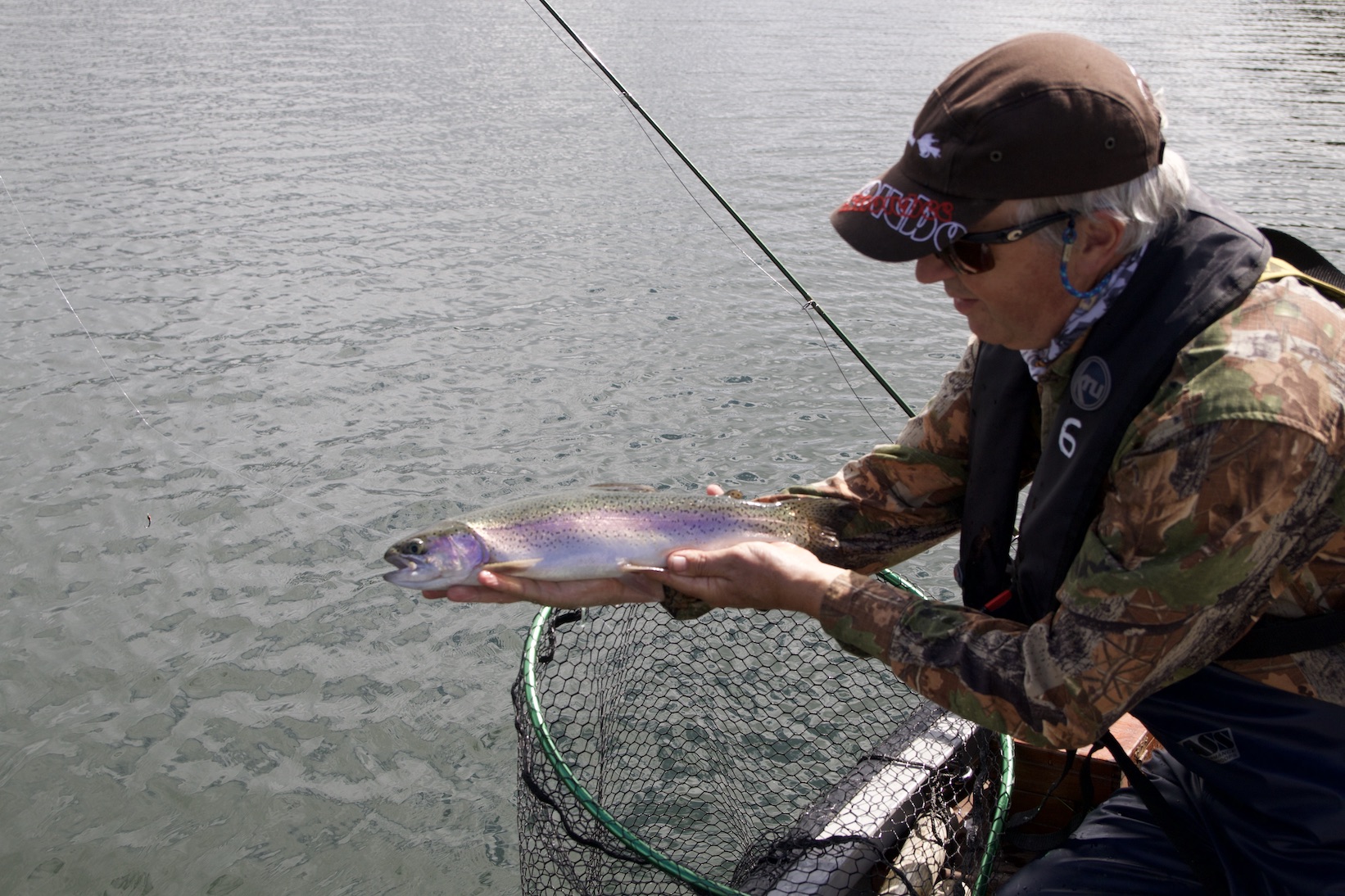 As afternoon drifted into evening we decided on a last half an hour back in the sailing club bay. After a few casts another rainbow hit my black zulu on the dropper. With four trout each it seemed a good time to head for home. 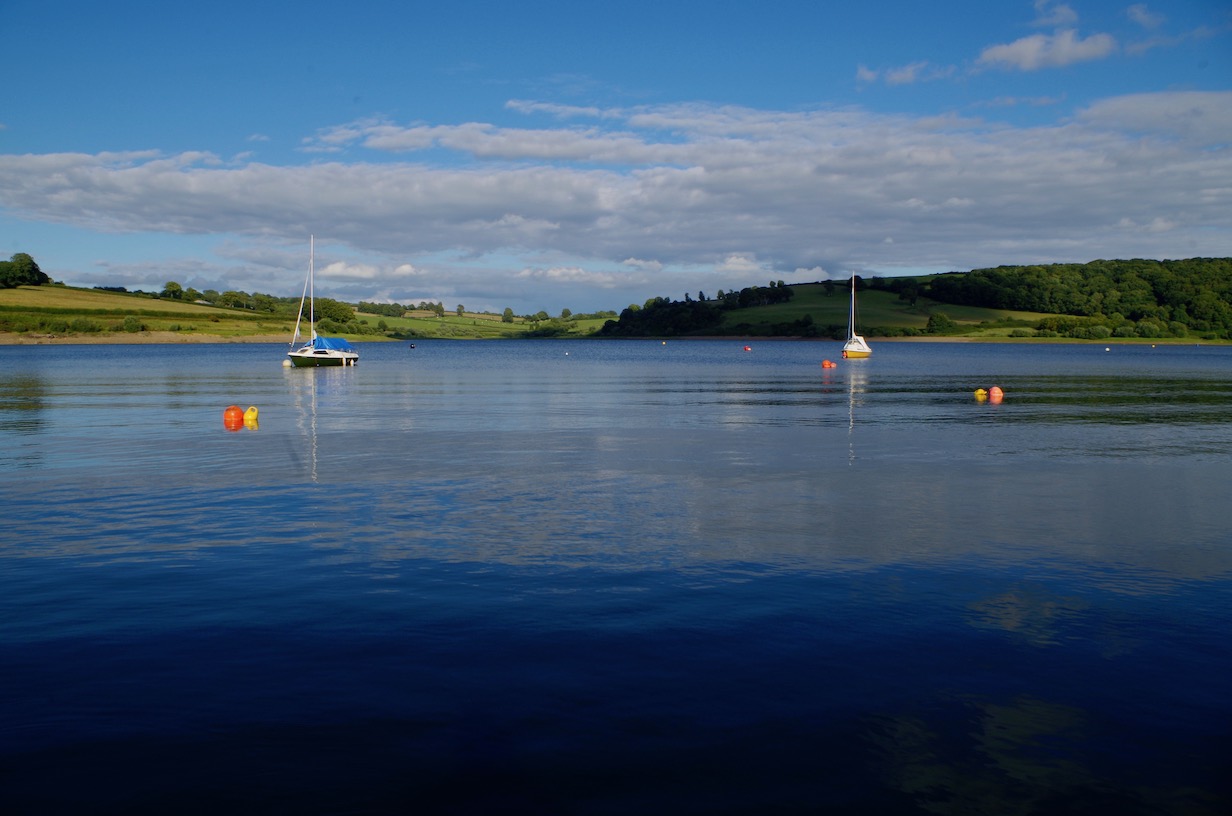 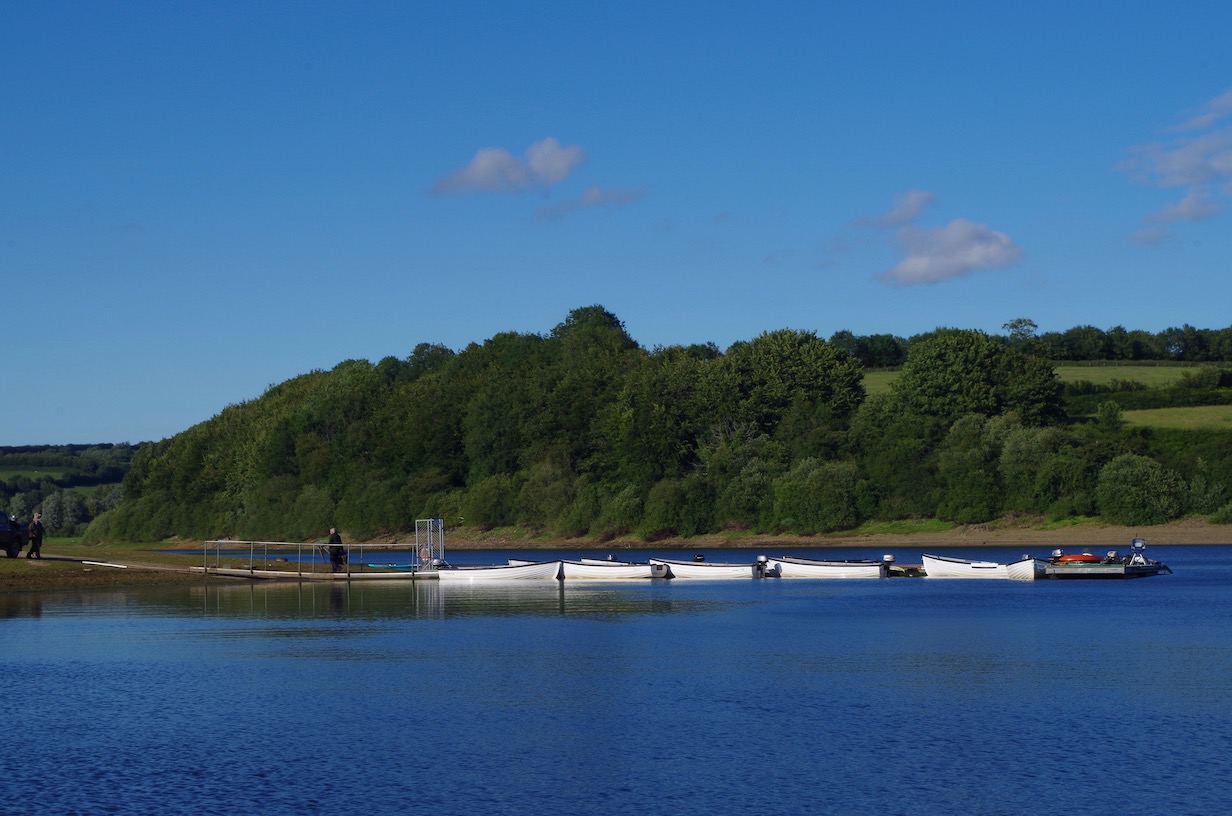 As we packed away the gear the lake looked superb in the early evening light. We reflected upon an enjoyable day of two halves. A morning when Jeff seemed to charm the trout and an afternoon when I somehow found the key to success. These long hard summer days though challenging are often just as rewarding as those easier days of plenty in the early season.

We will be back in search of those broad backed tuna shaped rainbows with full tails before too long!