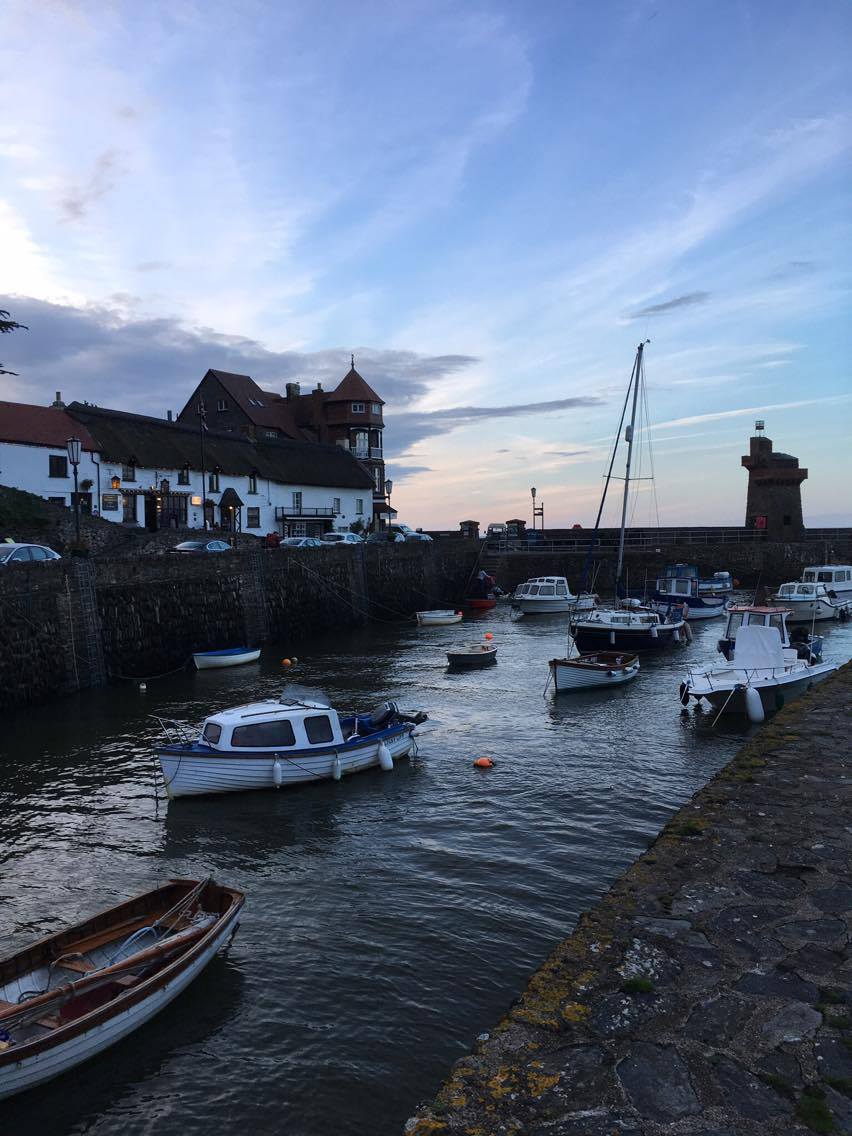 The annual Lyn Fish open competition attracted twenty local anglers competing for cash prizes and an impressive prize table from sponsors Sakuma Tackle and Braunton Baits. The event is a catch and release specimen match with fishing from boat and shore.

Anglers fished a wide variety of marks between the boundaries Minehead Harbour wall and Clovelly Harbour. Most of the winning fish coming from marks in the Lynmouth to Ilfracombe area.

Day one was blighted by a strong westerly wind that made boat fishing impossible and shore fishing a bit of a trial. Grey mullet were a popular target species with several competitors and it was these hard fighting fish that were being targeted by Daniel Welch on Saturday night when he hooked a hard fighting fish that took off on several long runs before eventually being netted. The fish turned out to be fine conditioned bass of 7lb 13oz tempted on bread-flake and size 8 hook! 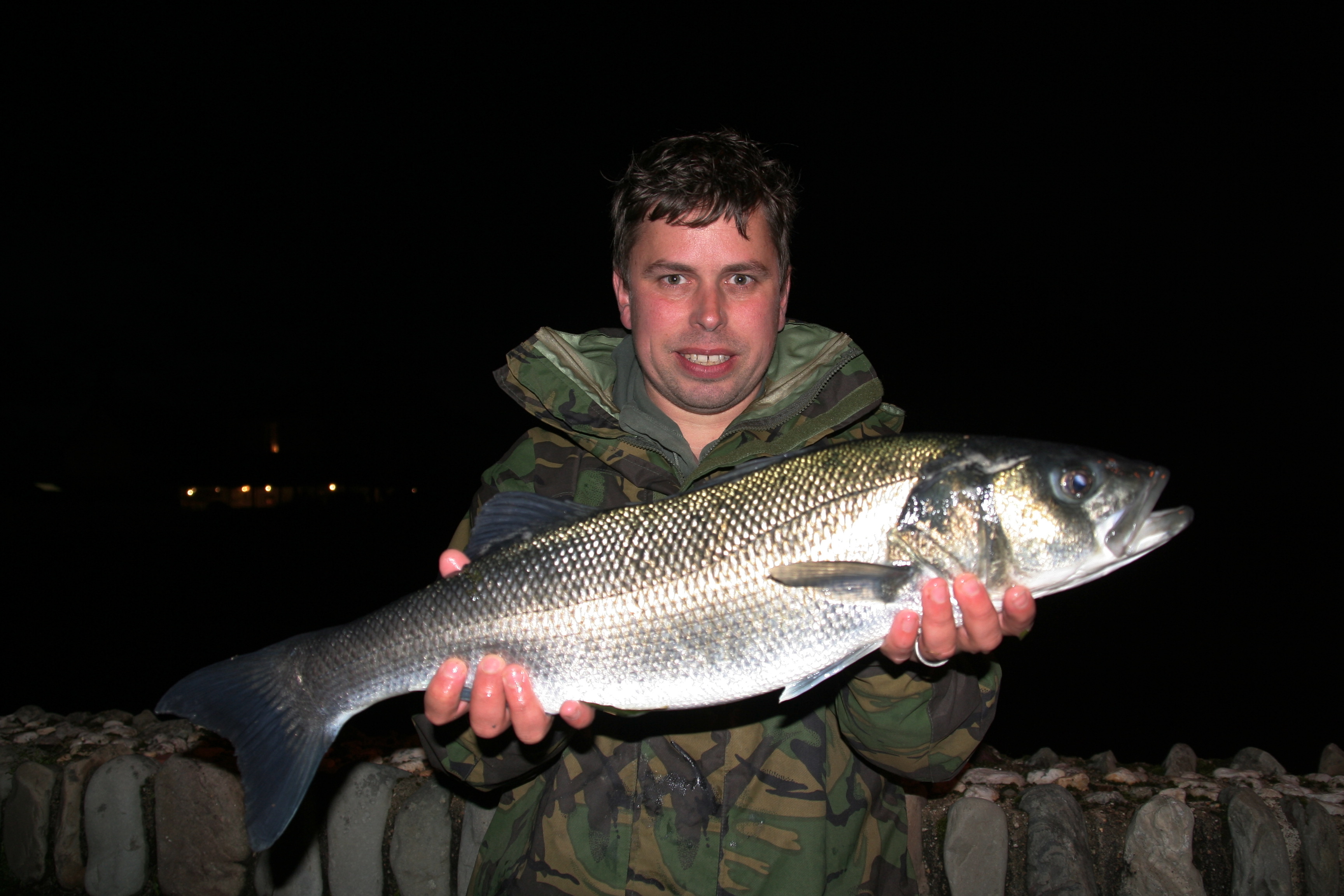 On the Saturday evening tide James Fradgely- Gubb and Rob Scoines fished a rock mark buffeted by the strong wind. A couple of good fish were lost but James eventually managed to land a specimen bull huss of 10lb 1oz.

In the early hours of Sunday morning Kevin Legge and Dave Brooke fished a rough ground mark where Kevin landed a couple of huss the best scaling 9lb 6oz. Kevin also landed a blonde ray of around 7lb that was a surprise on the rough ground they were fishing. 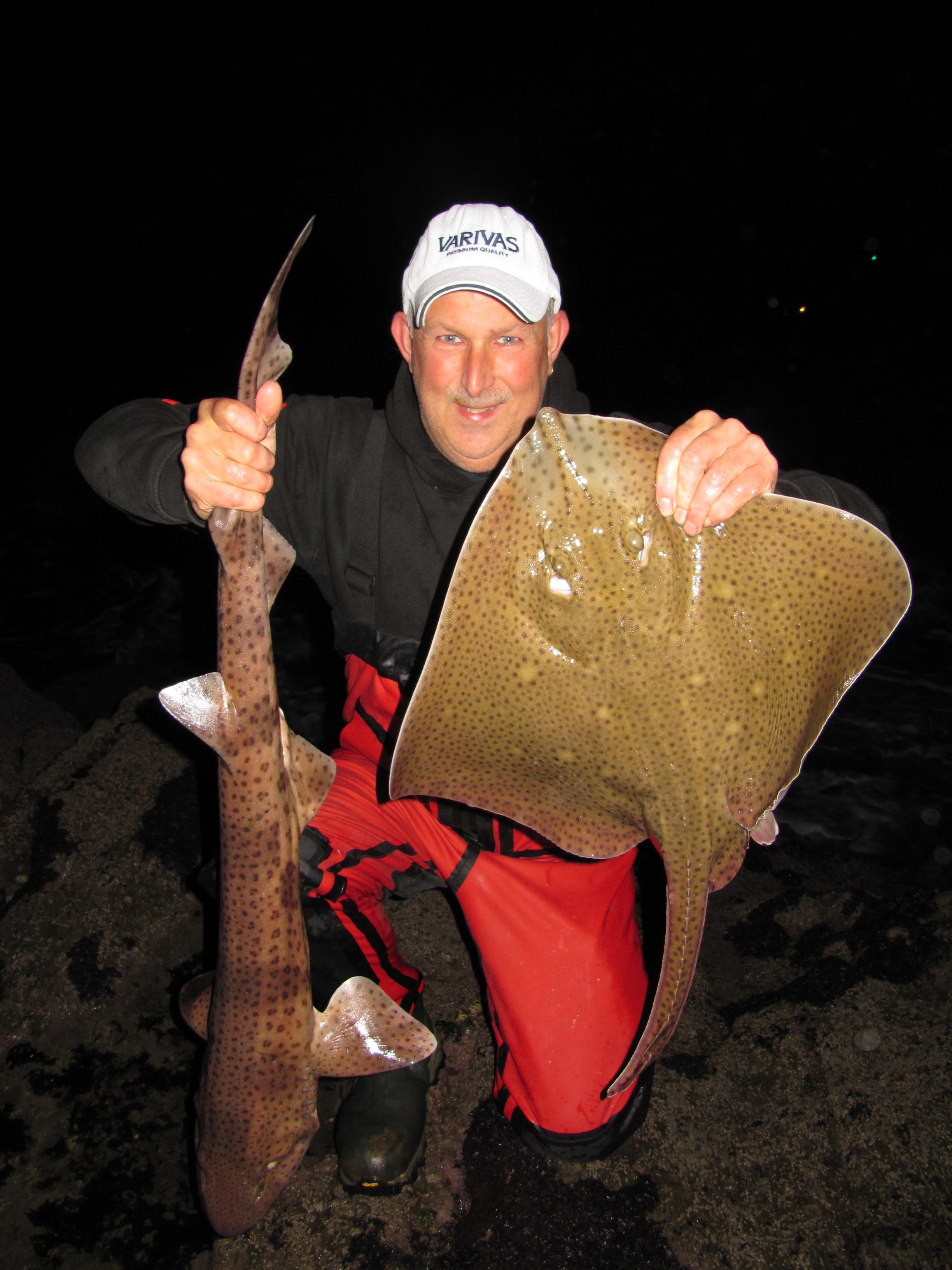 John Avery and myself targeted grey mullet and at 6.00am on the Sunday morning I cast out a two hook rig baited with bread flake. Seconds later I noticed the rod tip rattle and grabbed the rod as the butt lifted from the ground. A powerful fish surged away and battle commenced. A few minutes later John expertly wielded the net and a very pleasing mullet was secured. At 5lb 2oz it was a great start to the day! 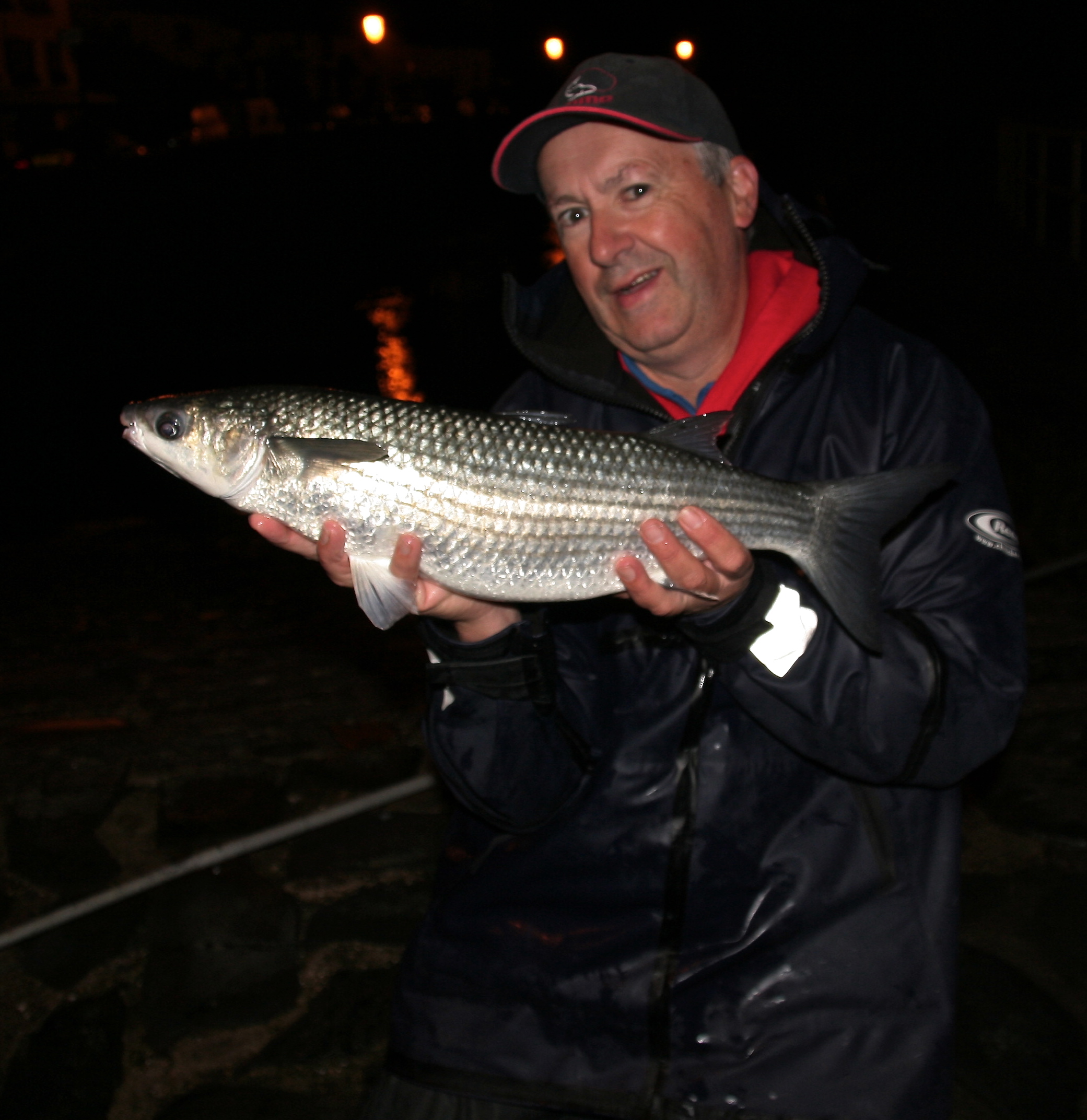 After a couple of quiet hours fishing we moved to another mark and found the mullet in a feeding frenzy landing half a dozen with John and Callum Gove landing the majority with Johns best scaling 2lb 9oz. 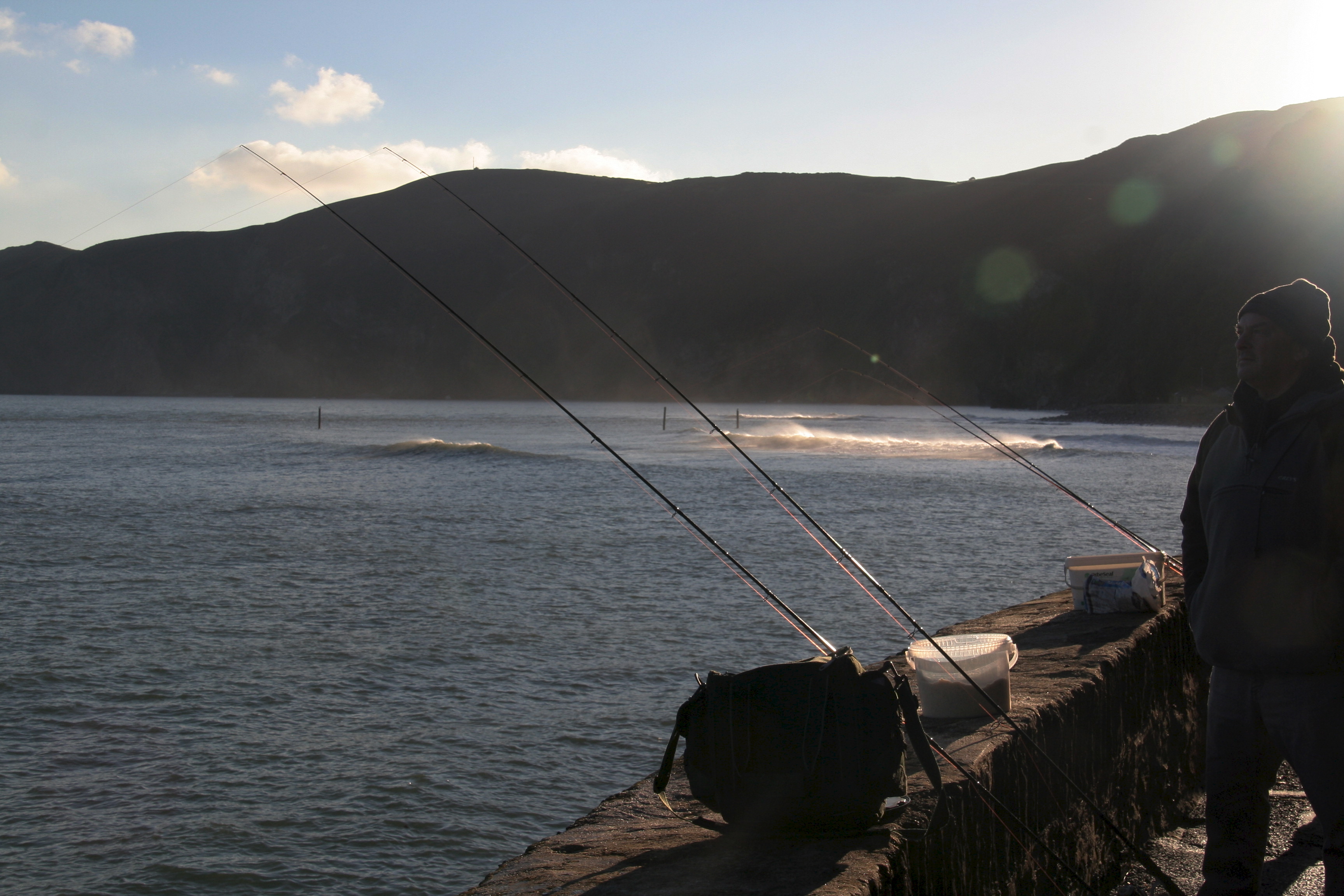 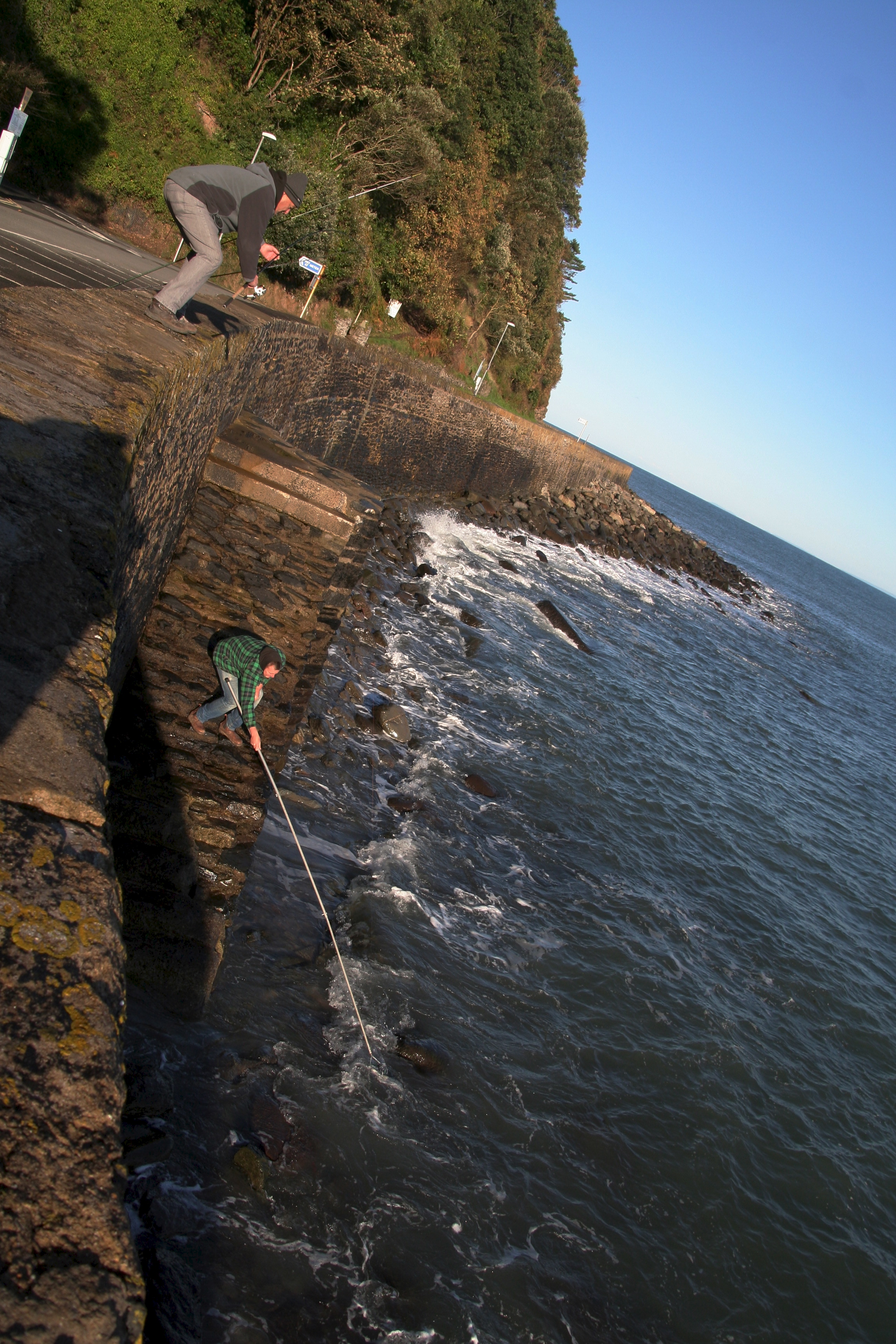 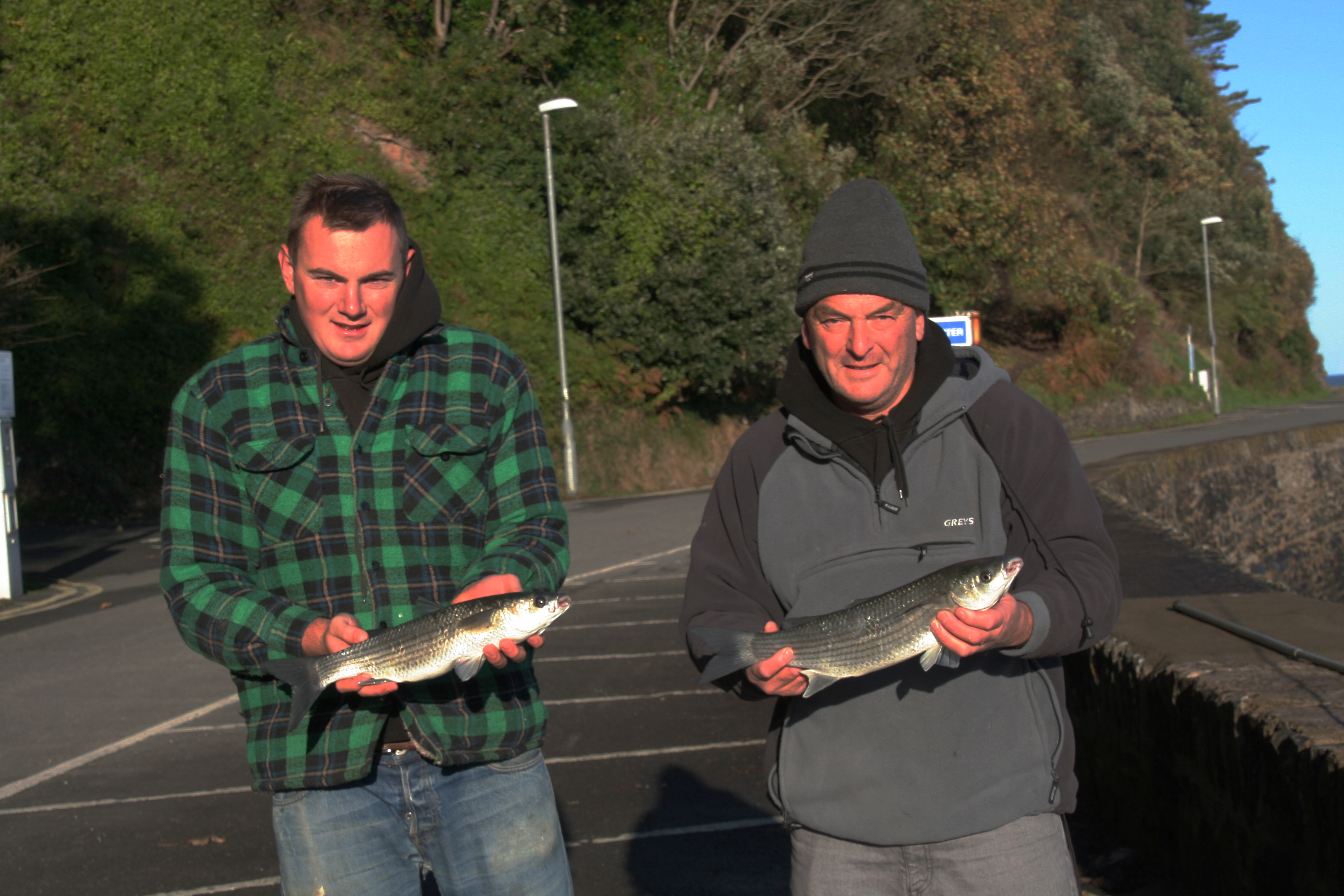 Louis Rooke and John Shapland paid a visit to the estuary in search of grey mullet and flounder. Louis managed the only weigh-able fish of note a plump flounder of 1lb 6oz.

The calm weather on Sunday enabled the boats to get afloat and Rob Scoines boated the best boat caught specimen of the day a small eyed ray of 9lb 13oz. Ross Stanway boated the biggest fish of the weekend; a tope of 30lb. 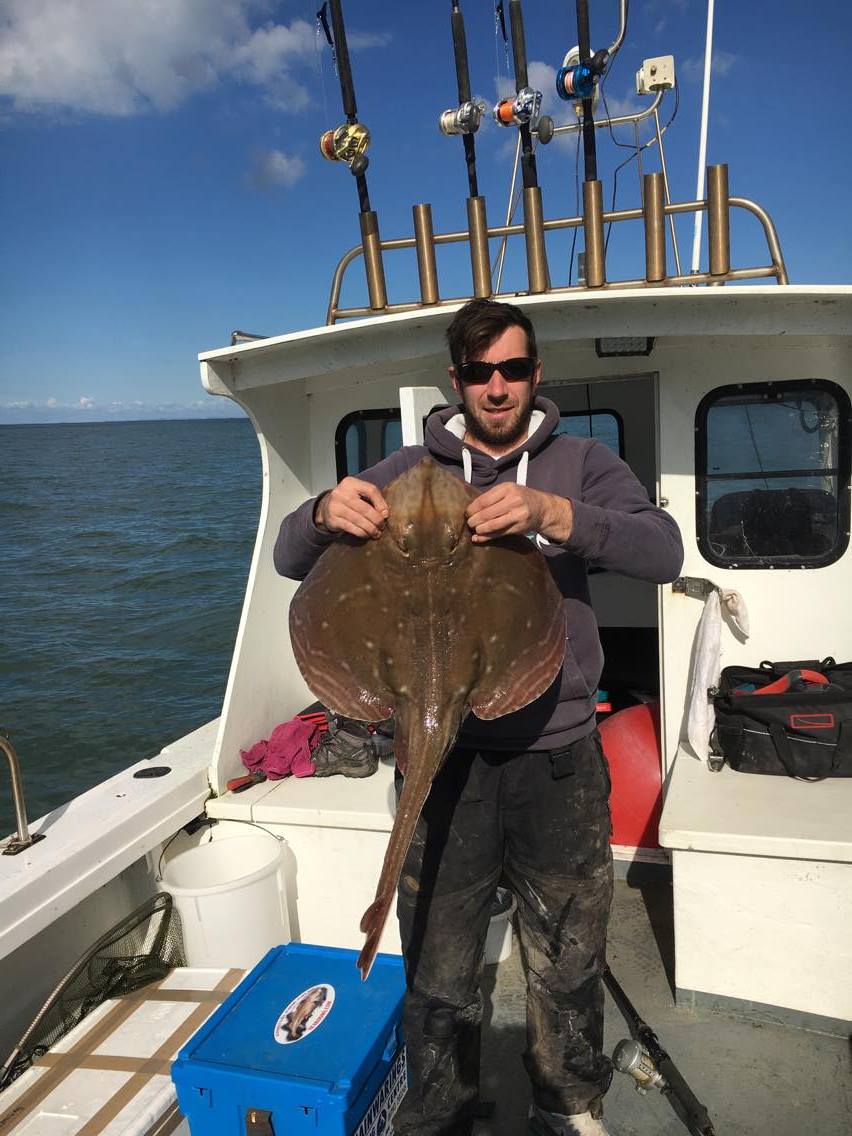 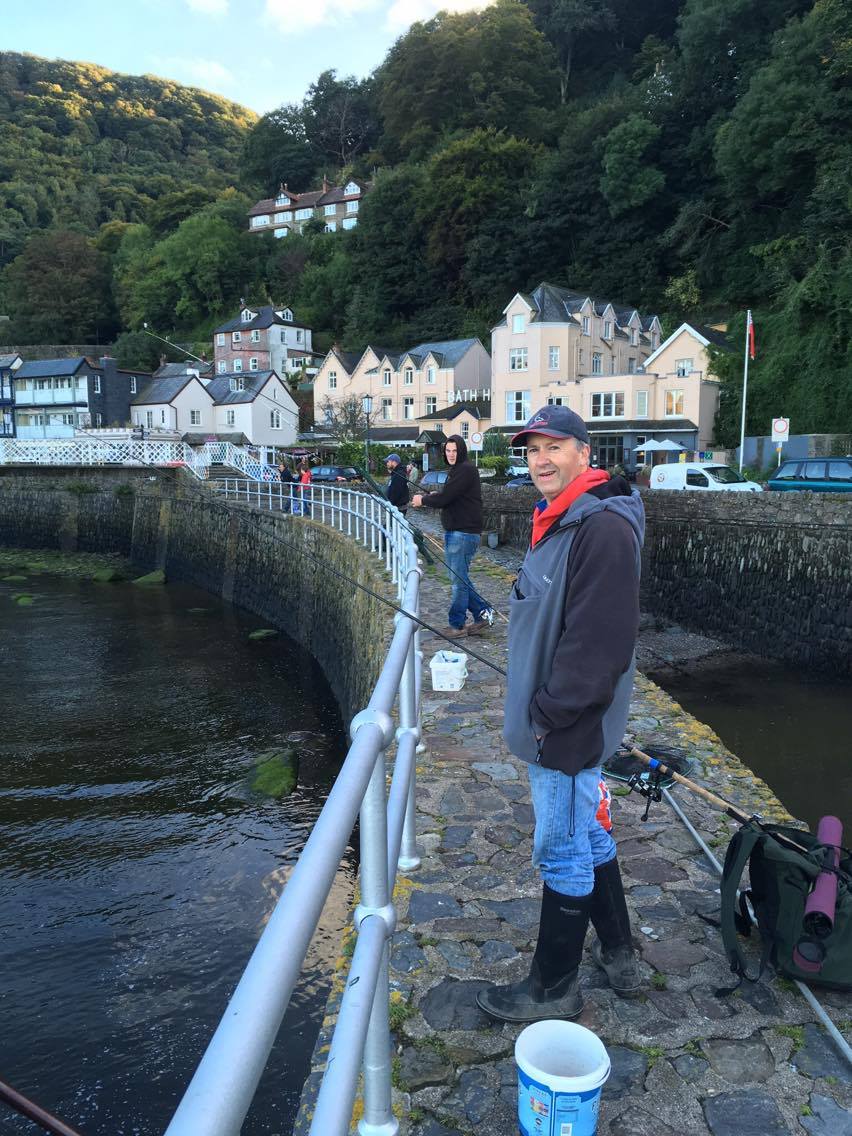 The weigh in and prize giving was held at the Rising Sun Lynmouth where platefuls of scrumptious sandwiches and hot chips were provided for the hungry anglers who had fished hard over the two days. Raffle tickets were sold for an array of impressive prizes donated by local businesses with the proceeds going to West Exmoor Federation. 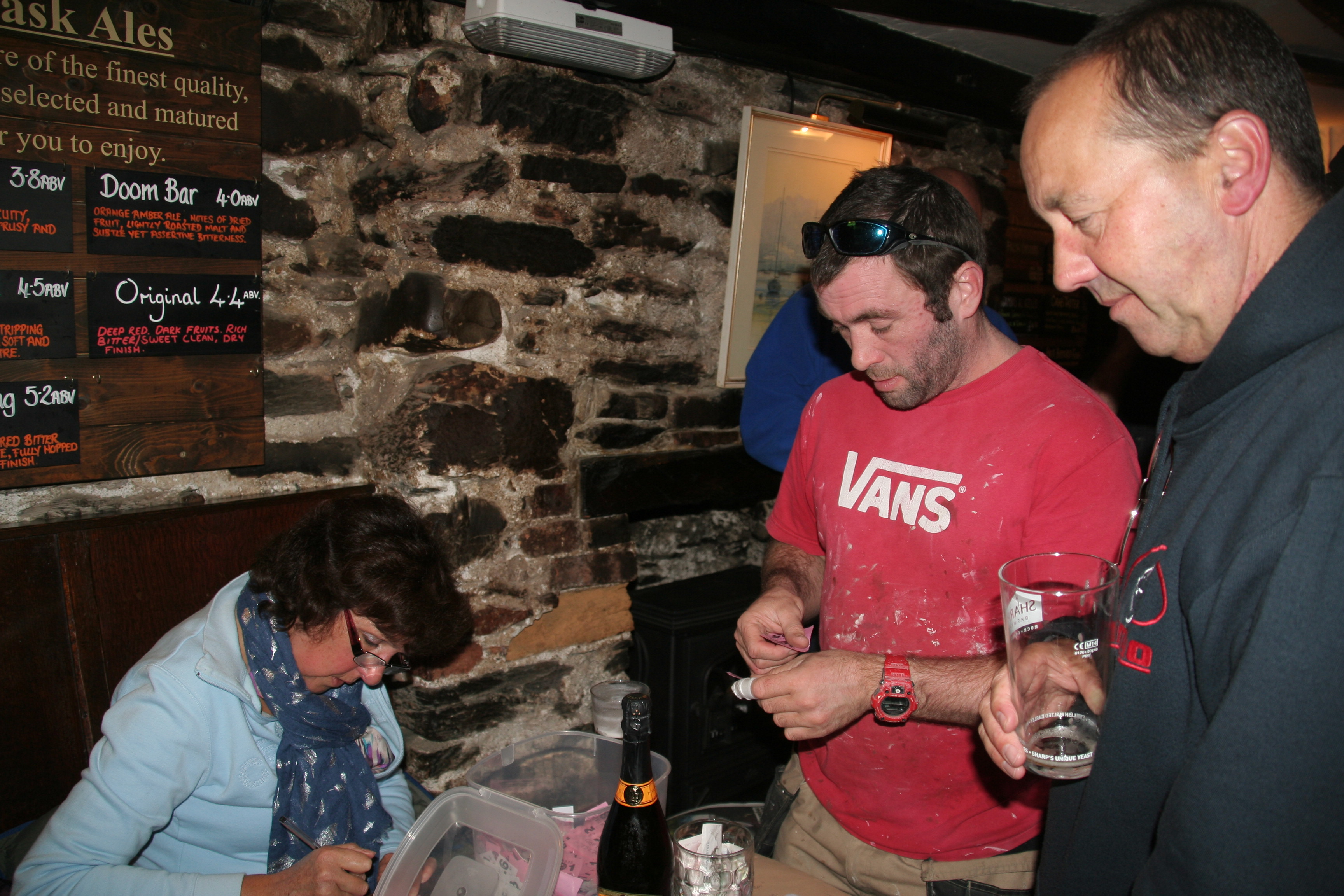 The raffle and fishing competition helped to raise £400 for the West Exmoor Federation of schools. 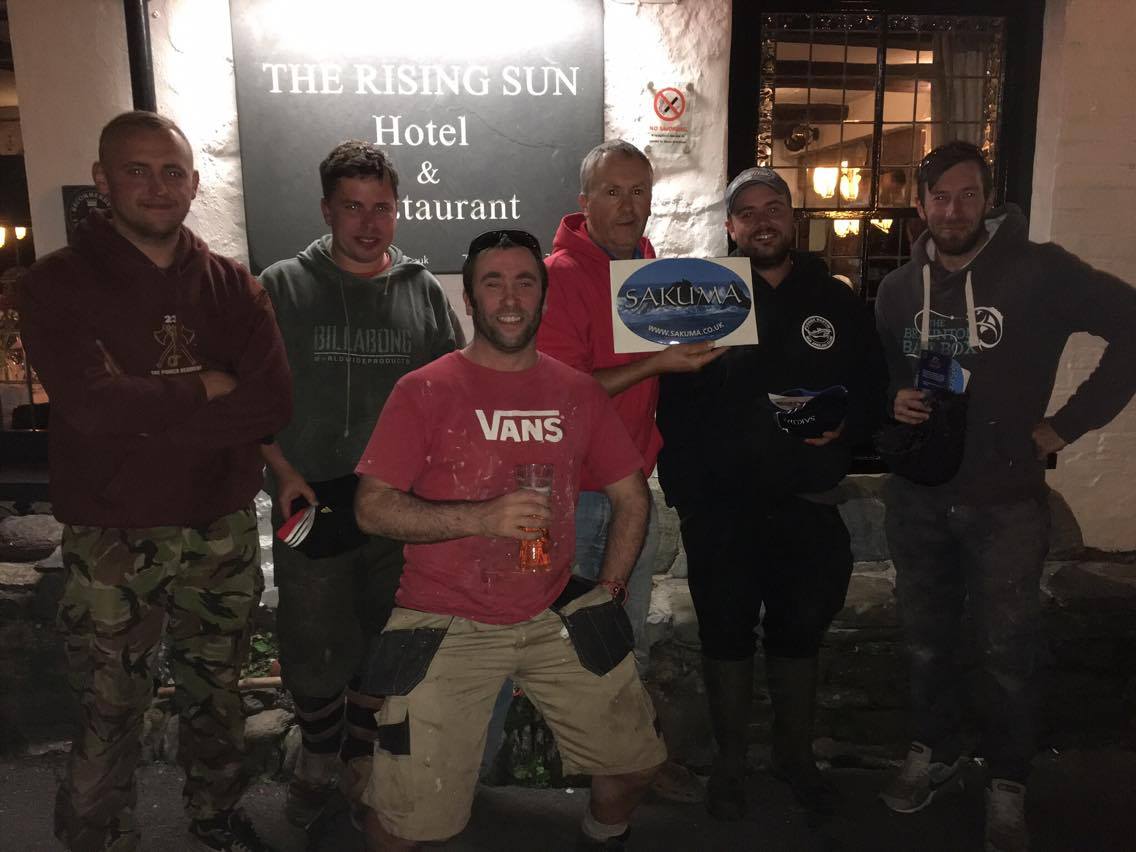 Combe Martin SAC give special thanks to all who participated and supported the event, to Sakuma and Braunton Baits for donating some excellent prizes. Thanks also to Tony Vickery and all at the Rising Sun for providing delicious food and making all welcome. 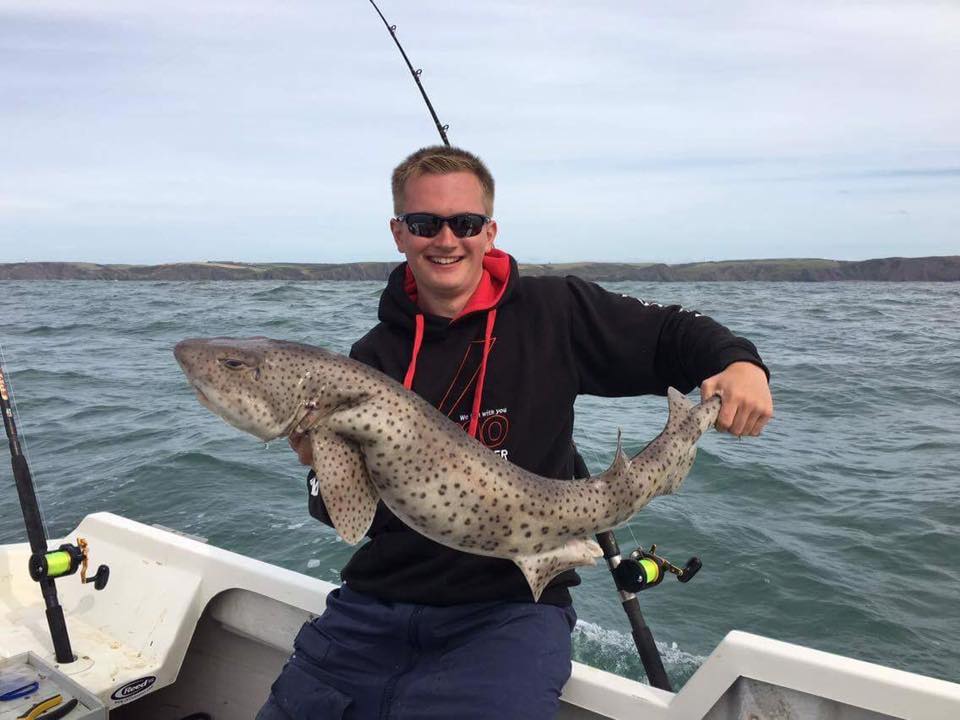 Despite some lumpy sea conditions, Rob Young didn’t waste any time finding the fish on a recent trip to North Devon after making the lengthy trip from South Wales for a 7.00am start with Stefan Jones. The day afloat with Stefan  resulted in this remarkable bull huss that was weighed afloat registering somewhere  between 14 and 16lb! The following day Rob fished from the coast with local angler Kevin Legge and landed a good bass of around 6lb as well as several other fish. 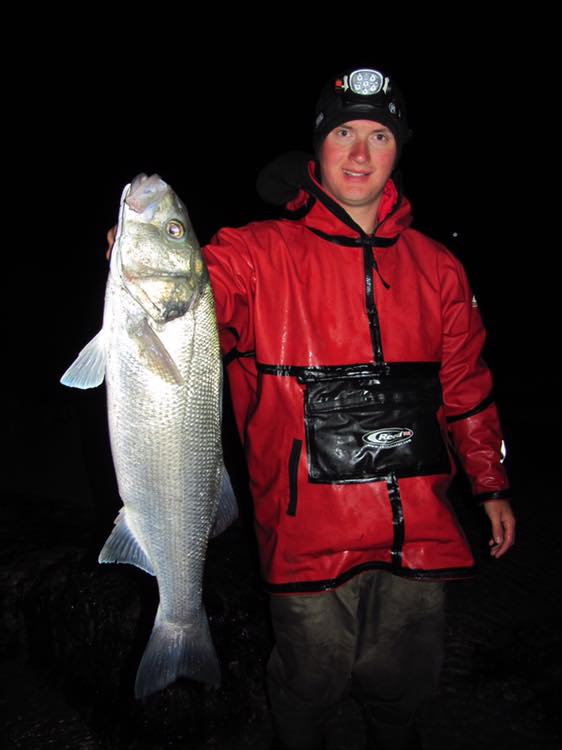 (Below)  Stefan release a hard fighting conger at the side of the boat. 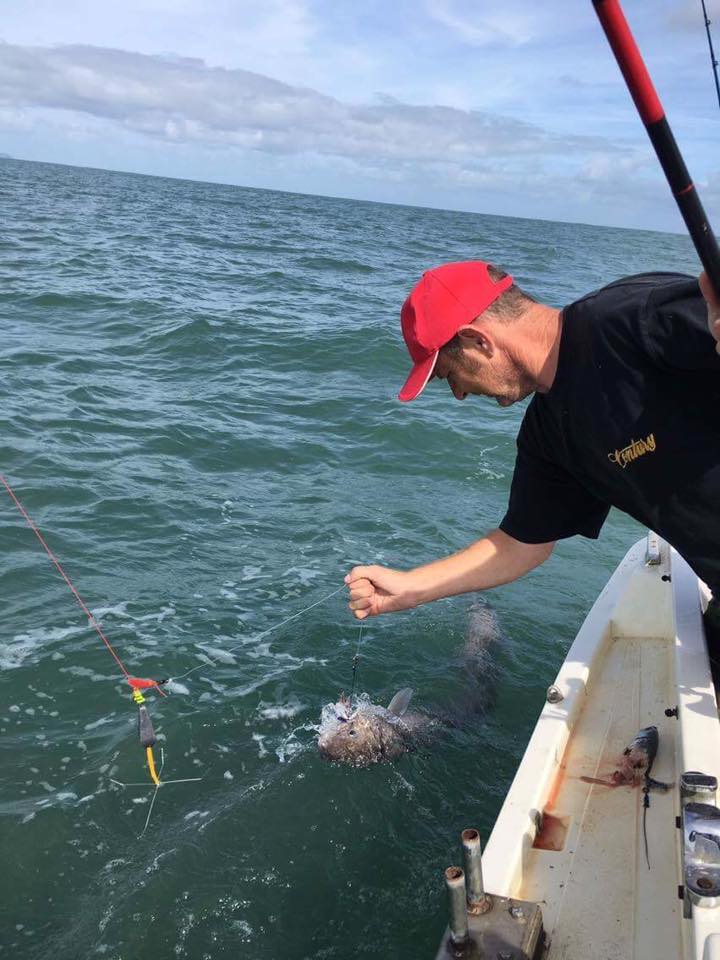 Stefan Jones, Matthew Druce and Sam Longhurst enjoyed a successful boat trip off the North Devon coast with Sam a newcomer to angling landing his first ever bull huss.

The trio enjoyed a great day afloat landing around twenty tope to 25lb, numerous huss and a few conger. All the fish were tempted using frozen Ammo mackerel. The day was made extra special in the presence of dolphins, porpoises and gannets. 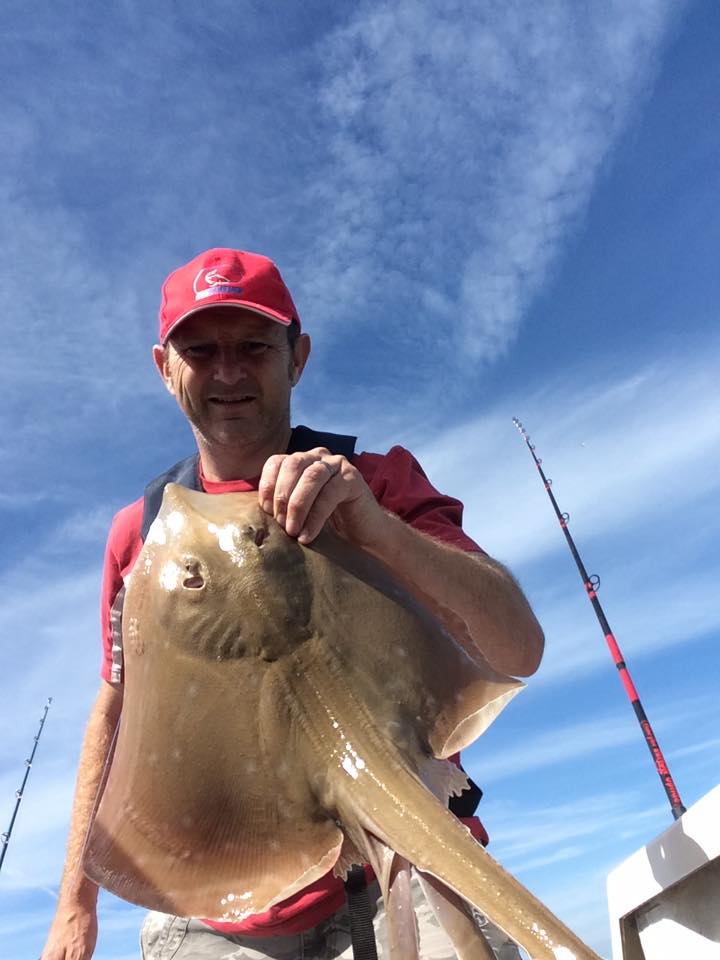 When the weather permits private boat anglers are enjoying some fine sport off the North Devon Coast with tope the main target species. Recent rough weather has clouded the water encouraging some species to feed hard with lower light levels. Stefan Jones headed to a mark off Woolacombe in his Private boat and enjoyed a great days sport landing nine small eyed ray between 5lb and 7lb plus smoothound and bull huss. The successful bait was Ammo sandeel wrapped in squid.

Tope continue to provide exciting sport off Ilfracombe as Ian Tyldesley director of Ammo Baits discovered when he traveled up from St Ives to fish aboard Ammo Baits sponsored boat Reel Deal. Dan Hawkins put the anglers on the fish despite breezy conditions that made fishing a little uncomfortable for some of the party. In addition to tope the anglers also landed several bass.