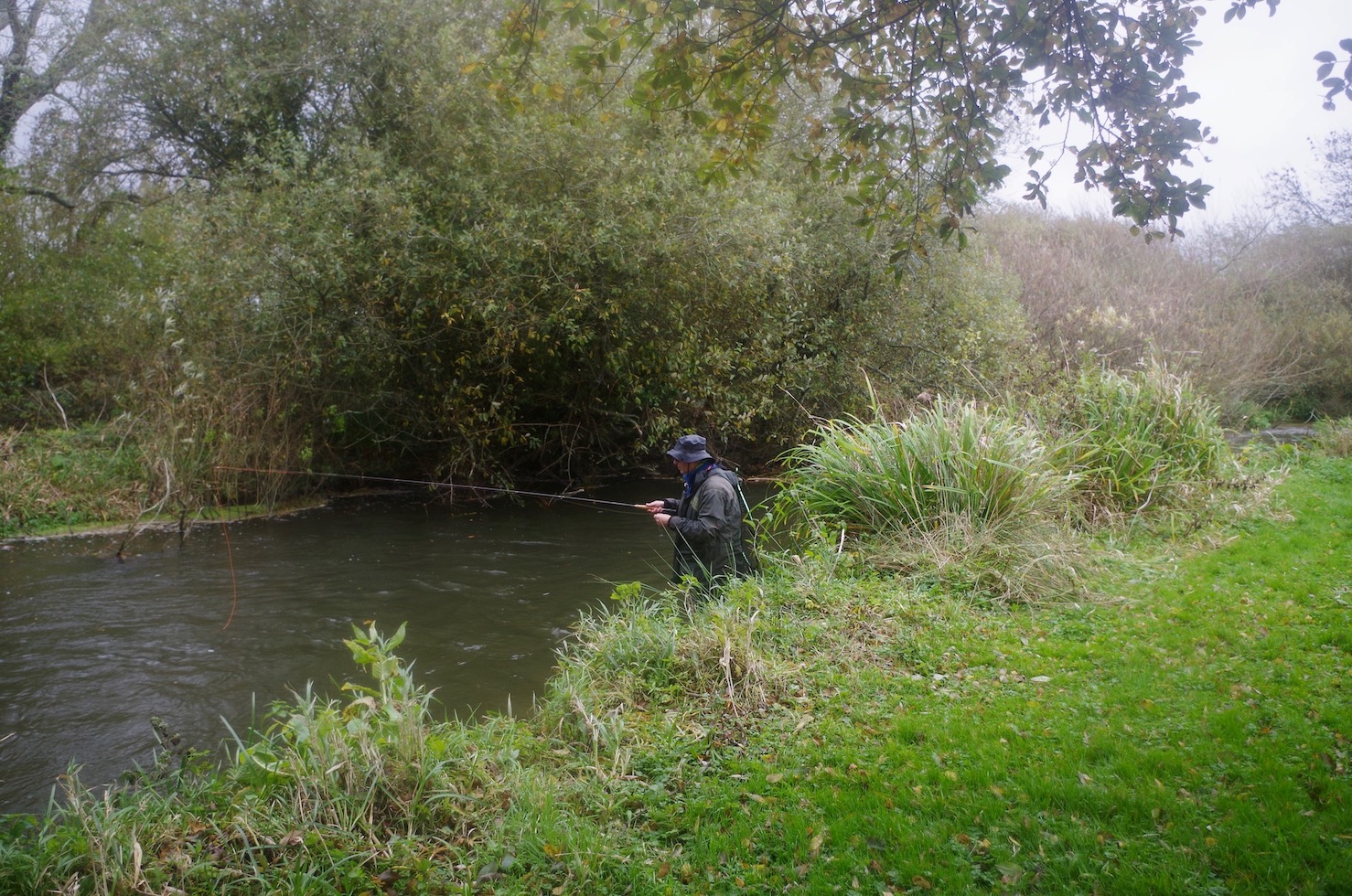 In these troubled times time with the rod is so precious bringing a sense of stability to life that is in the shadow of ongoing uncertainty. To the East of Dorchester there are a number of small quintessential English villages nestled in the Upper Frome valley that exude that reassuring essence of continuity we perhaps need during these unprecedented times.

The River Frome is a chalk stream that rises in the Dorset downs passing through Dorchester and numerous villages before converging with the tide at Wareham before entering Poole Harbour.

For an angler the Frome has a rich and varied variety of fish to pursue with the upper reaches dominated by game fish and the lower reaches more suited to coarse fish that grow to specimen sizes. Salmon and sea trout also migrate throughout the river their dwindling numbers of concern as they are throughout the land.

The autumn and winter months are grayling season on the Upper River with the spring and summer trout season. John Aplin is custodian of several stretches of the Frome and carefully nurtures the river to provide a thriving habitat where wild trout and grayling reside within the crystal clear flowing water between swaying fronds of ranunculas.

Pauline and I were staying at the Dairy House West Stafford a well-furnished and comfortable Self catering http://www.chalkstreamflyfishing.co.uk/accommodation/

The accommodation is situated just a short walk away from an exclusive beat of the River Frome that has a reputation for producing huge grayling. It was these grayling that I was hoping to connect with and a day fishing had been booked to coincide with our stay.

The Autumn weather preceding our trip had been unsettled with weather fronts rushing across South West England from the Atlantic. I hoped that the rain had not rendered the river out of sorts as had happened on my previous two visits to the river in search of grayling. 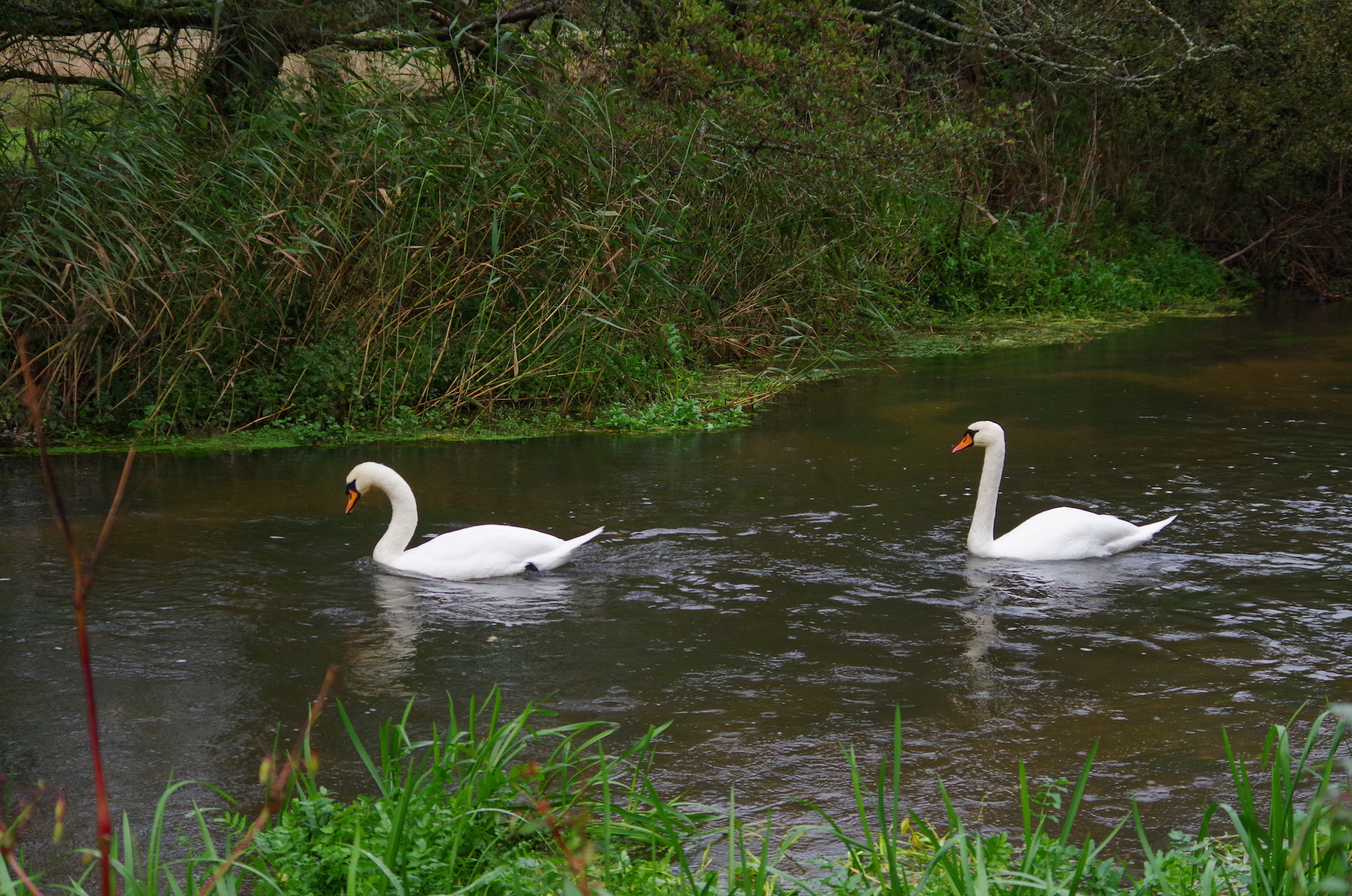 We arrived mid-week and walked the river in late afternoon as the light began to ebb from the day. The river had a tinge of colour but was at a good height and certainly fishable. A herd of Sika deer were grazing in the meadow a large stag in attendance with his harem of fertile females. In the river a pair of swans searched for food gliding gracefully upon the water. Rooks swirled above the trees and leaves fluttered to the ground as the mild westerly gale swept the valley. 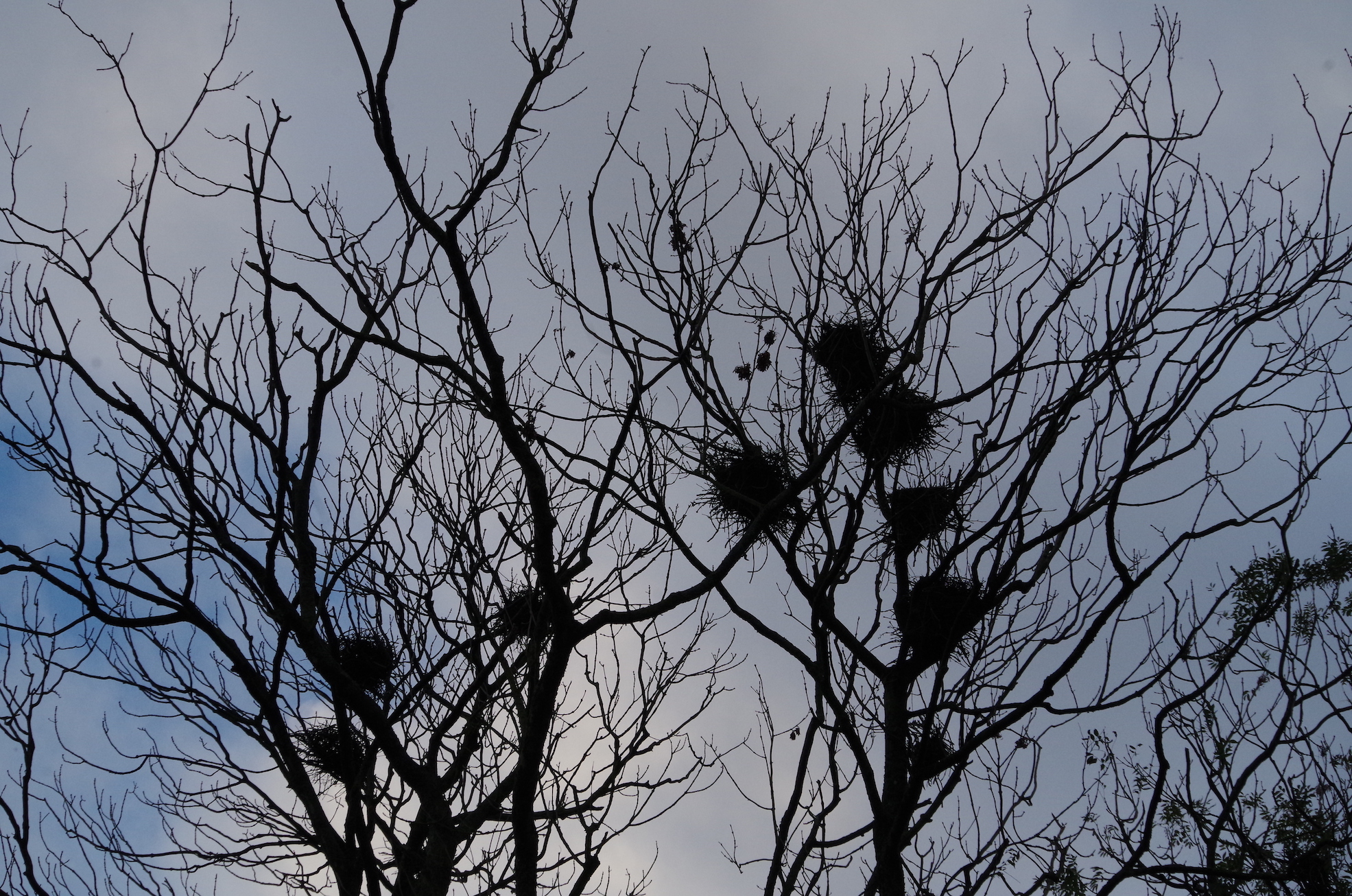 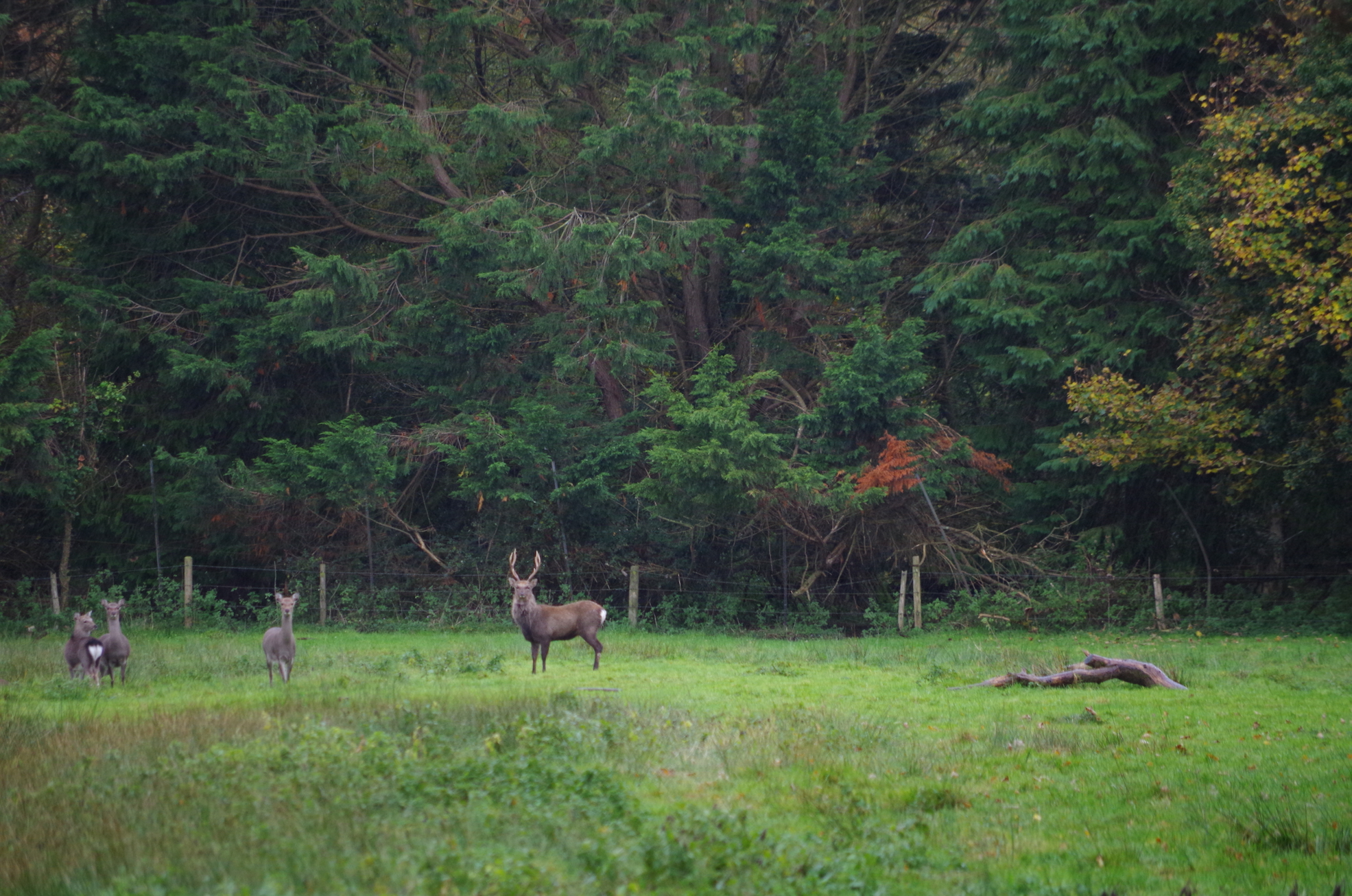 Rain pattered upon the windows overnight driven by the westerly wind. I slept fitfully through the night my mind full of weighted nymphs, running water and grayling.

After breakfast I assembled the tackle and chatted with John who told me that the river had dropped slightly and should be in good order despite the overnight rain. 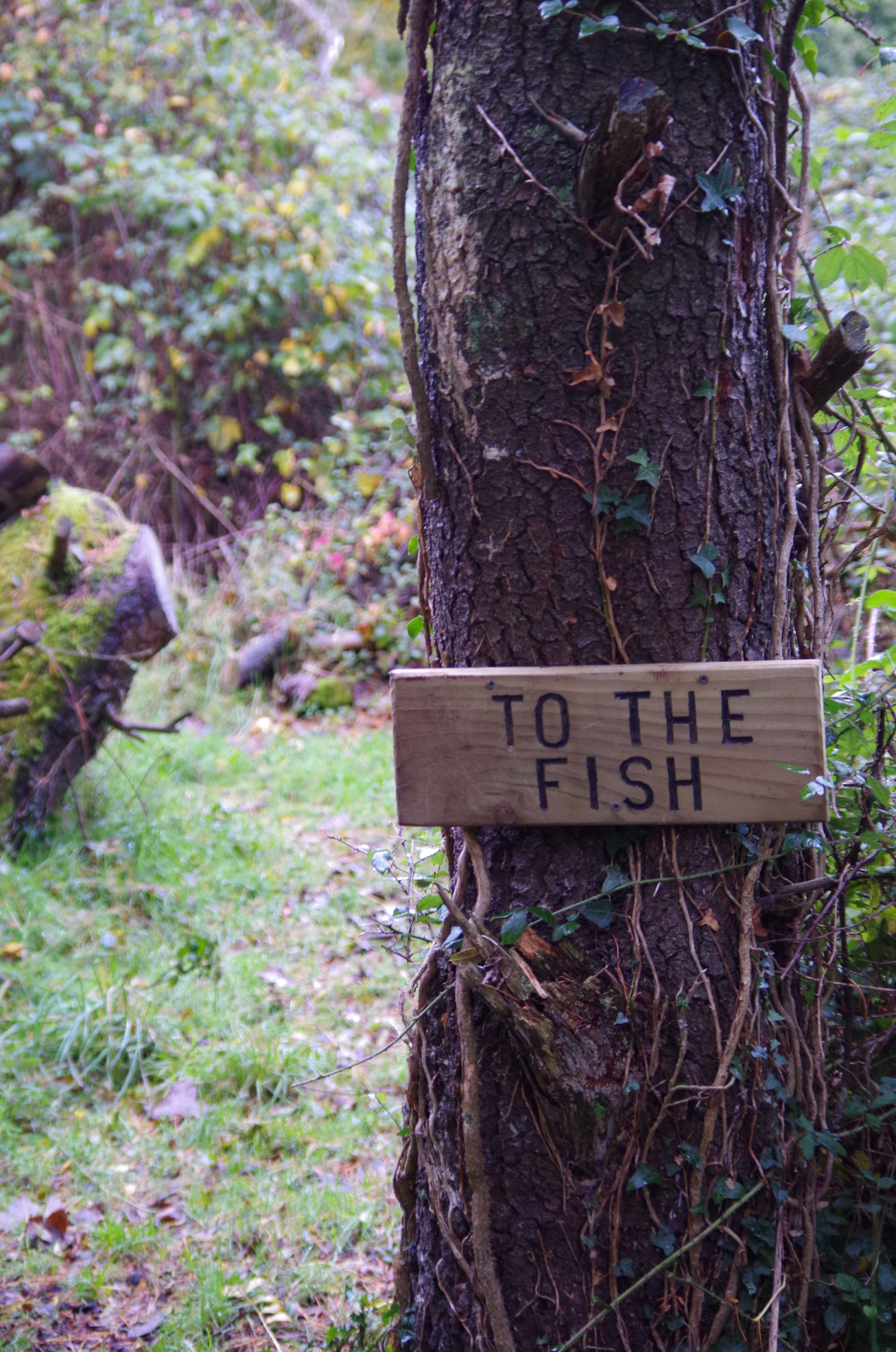 I headed eagerly for the bottom of the beat the path winding its way through dense woodland. The river was slightly clearer than the previous day and at a good height. I was using a 10ft 3 weight nymphing rod, and  two weighted nymphs on a 4lb fluorocarbon leader.

Whilst with polaroid’s I could glimpse into the river spotting fish would not be easy. My tactics were to wade carefully upstream searching likely lies trundling the nymphs over the gravelly runs and probing the deeper darker lies. Reading the water is a skill that is learned over many trips to the river though it is fair to say that  all rivers share many characteristics and the language of the chalk-stream I waded now was not that different to the River Umber I explored as a child angler many decades ago.

Searching the water is a wonderfully cathartic experience requiring total concentration as the bright tip of the line traces the progress of the nymphs bouncing the gravelly runs. Each flicker of the line as the hook catches weed required a tightening of the line in case it is a fish that has been deceived. The wind conspires to send each cast astray, tree branches reach down to ensnare and tangle the nymphs that I have collected after succumbing to tempting emails and posts from https://www.barbless-flies.co.uk  I hoped the grayling would be equally impressed!

After half an hour of searching I lifted the rod to flick out another cast but there came a pleasing living resistance. For a moment I was almost spellbound in disbelief as the rod plunged over, the line moving purposely upstream. The fish hung powerfully in the strong current then used the flow to gain a few yards of line heading down river. I caught sight of a silver flank and the distinctive sail like dorsal fin. Tense moments followed before the fish was safe within the folds of the net. The tiny pink nymph fell from the fishes underslung mouth, I gazed in wonder at the lady of the stream, put a number to it weighing in quickly in the net 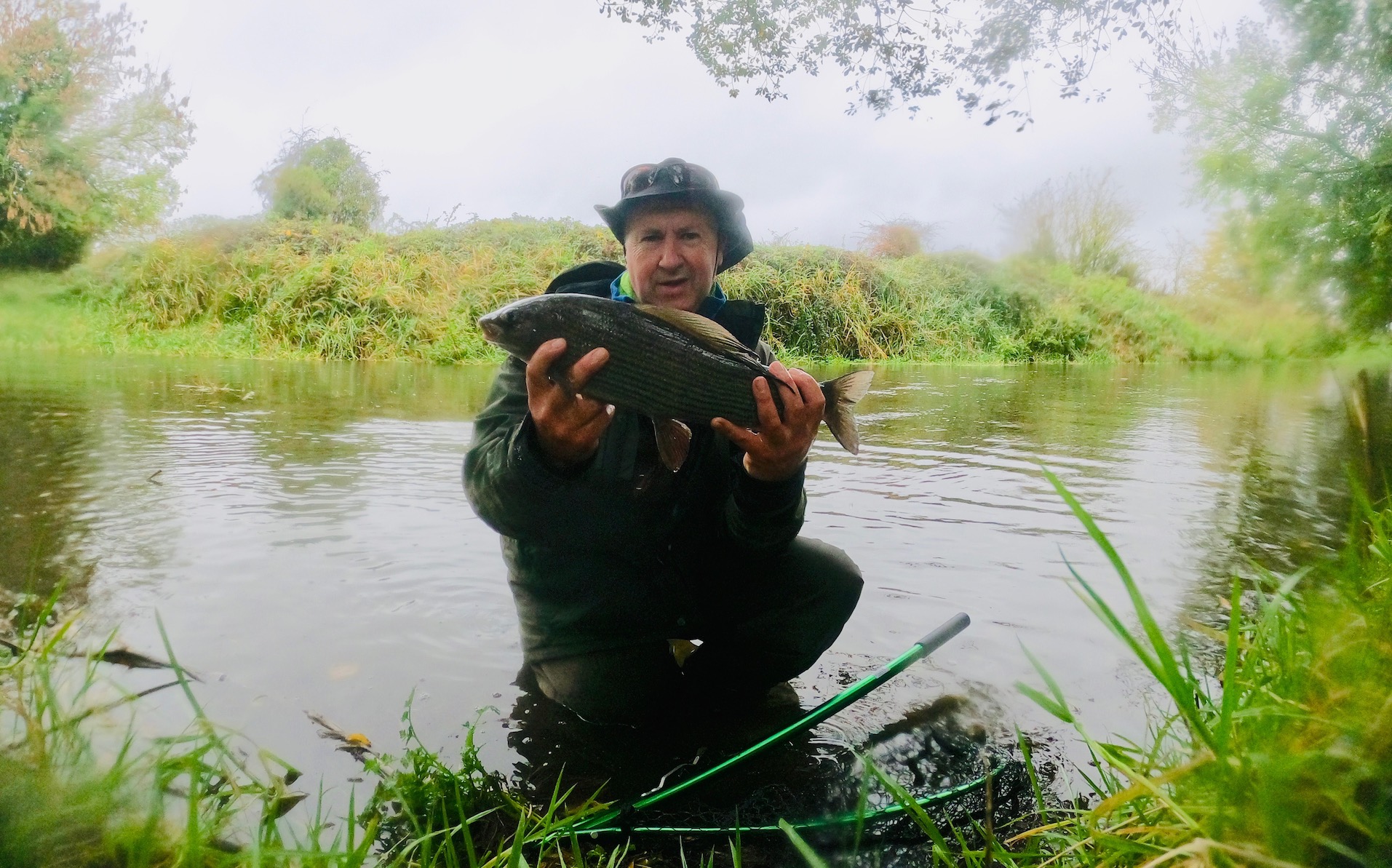 (2lb 12oz) and took its portrait before holding the fish in the current relishing the sight of the fish swimming strongly away into the stream of memory. 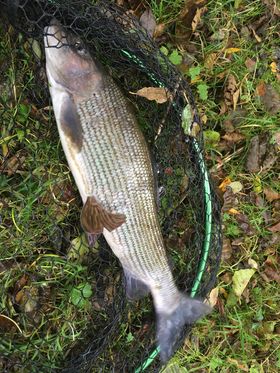 I sent a picture to Pauline who was relaxing back in the Annexe. I fished on up through the beat immersed in the contentment of success. An hour later I broke away from the river for a late morning coffee.

Shortly after midday I was back in the river Pauline close at hand to take a few pictures of the river as I flicked my offerings into the stream ever expectant now having had my confidence boosted by success. One more grayling succumbed in early afternoon a feisty fish of perhaps 12oz. I caught a glimpse of a couple more grayling that had undoubtedly seen me before I had focussed upon them in the ever running stream. 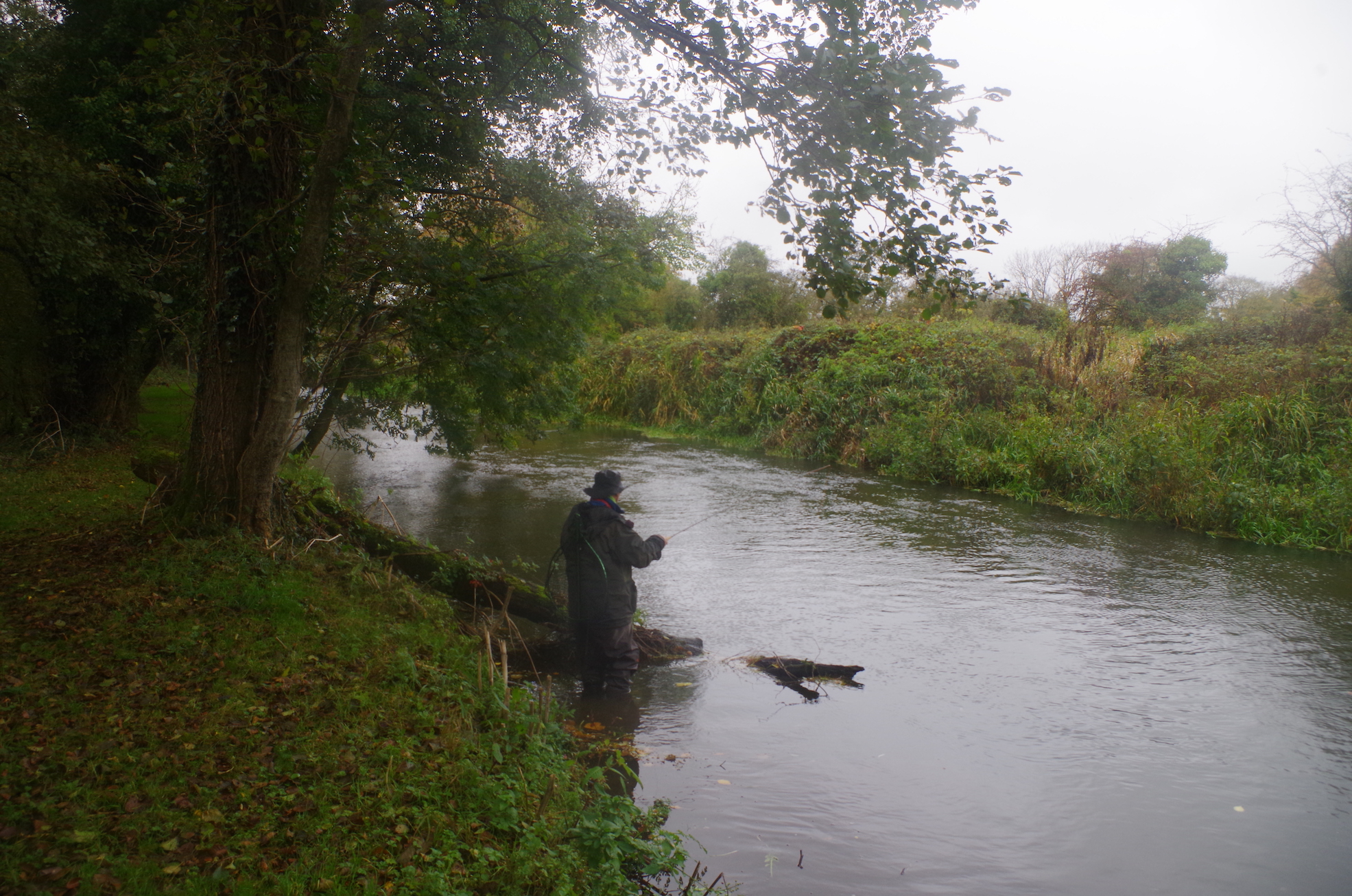 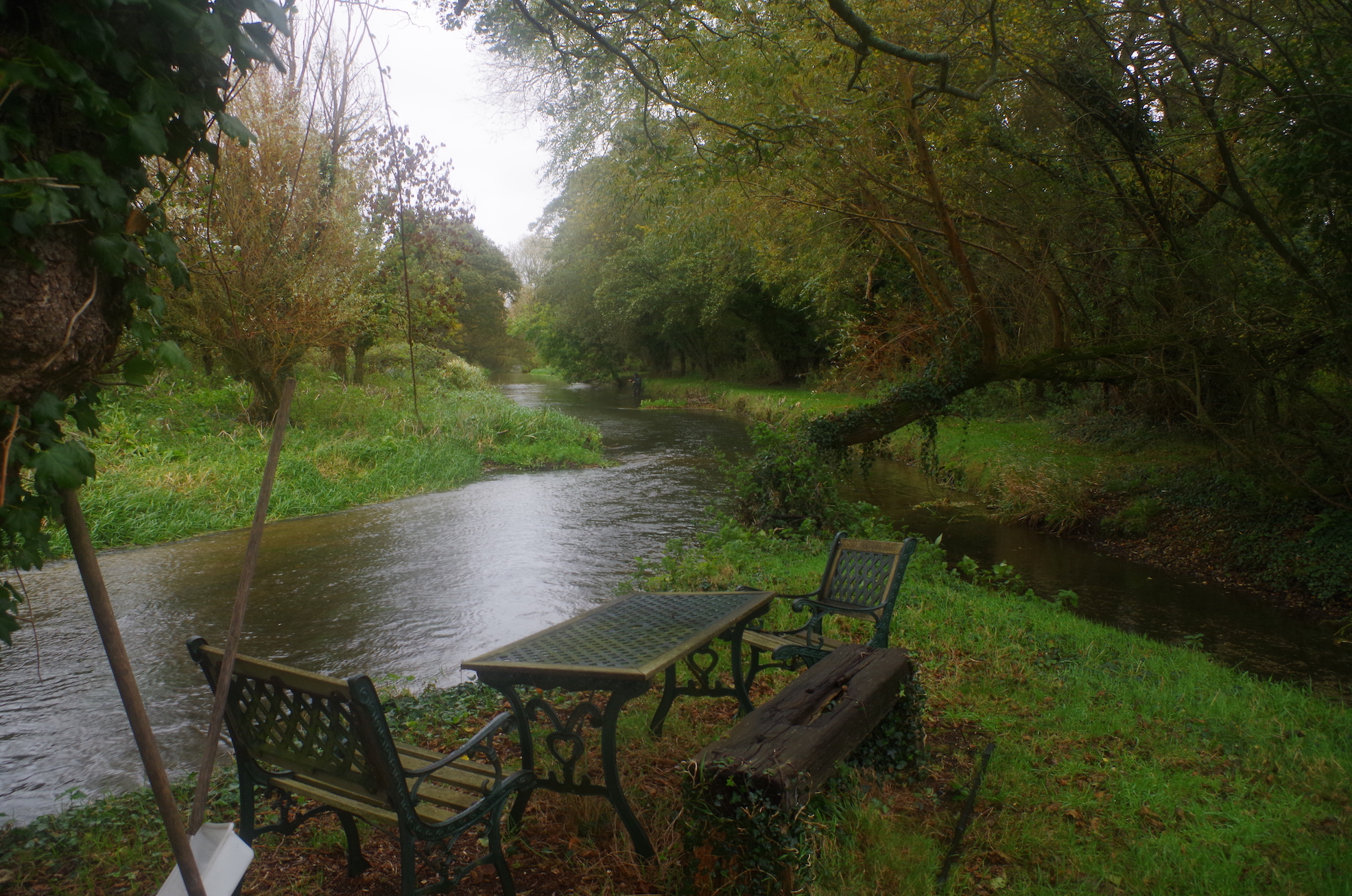 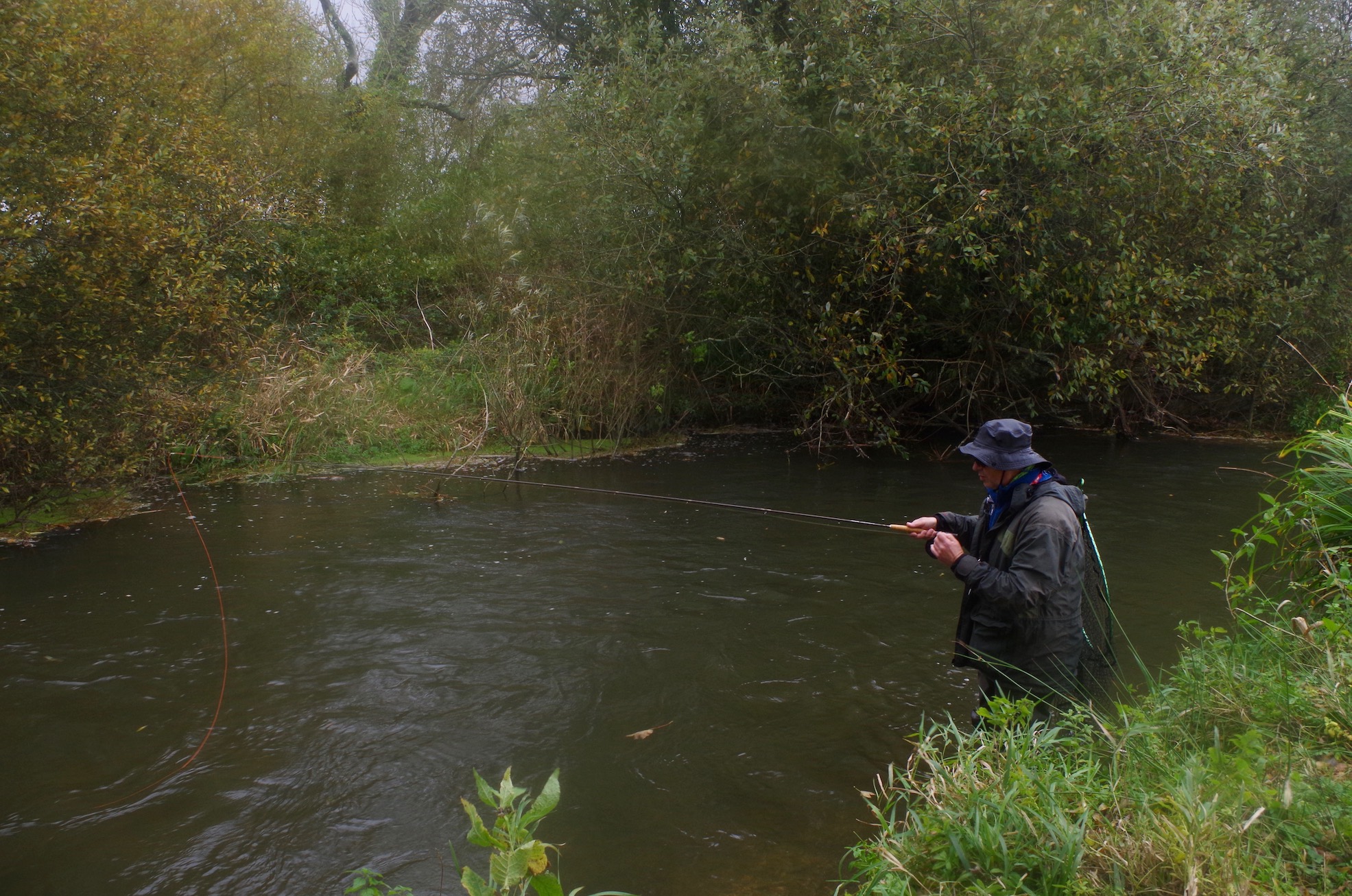 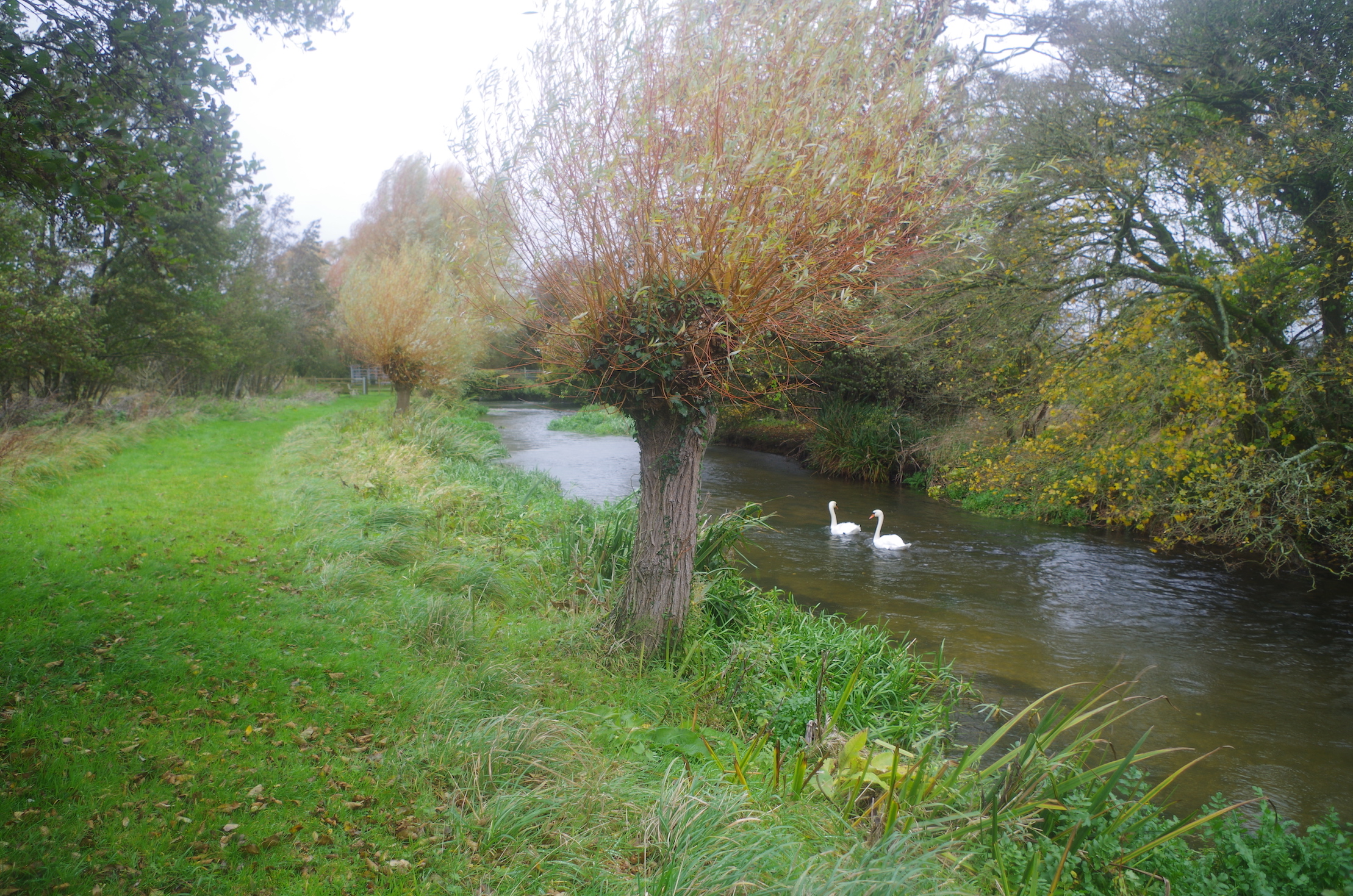 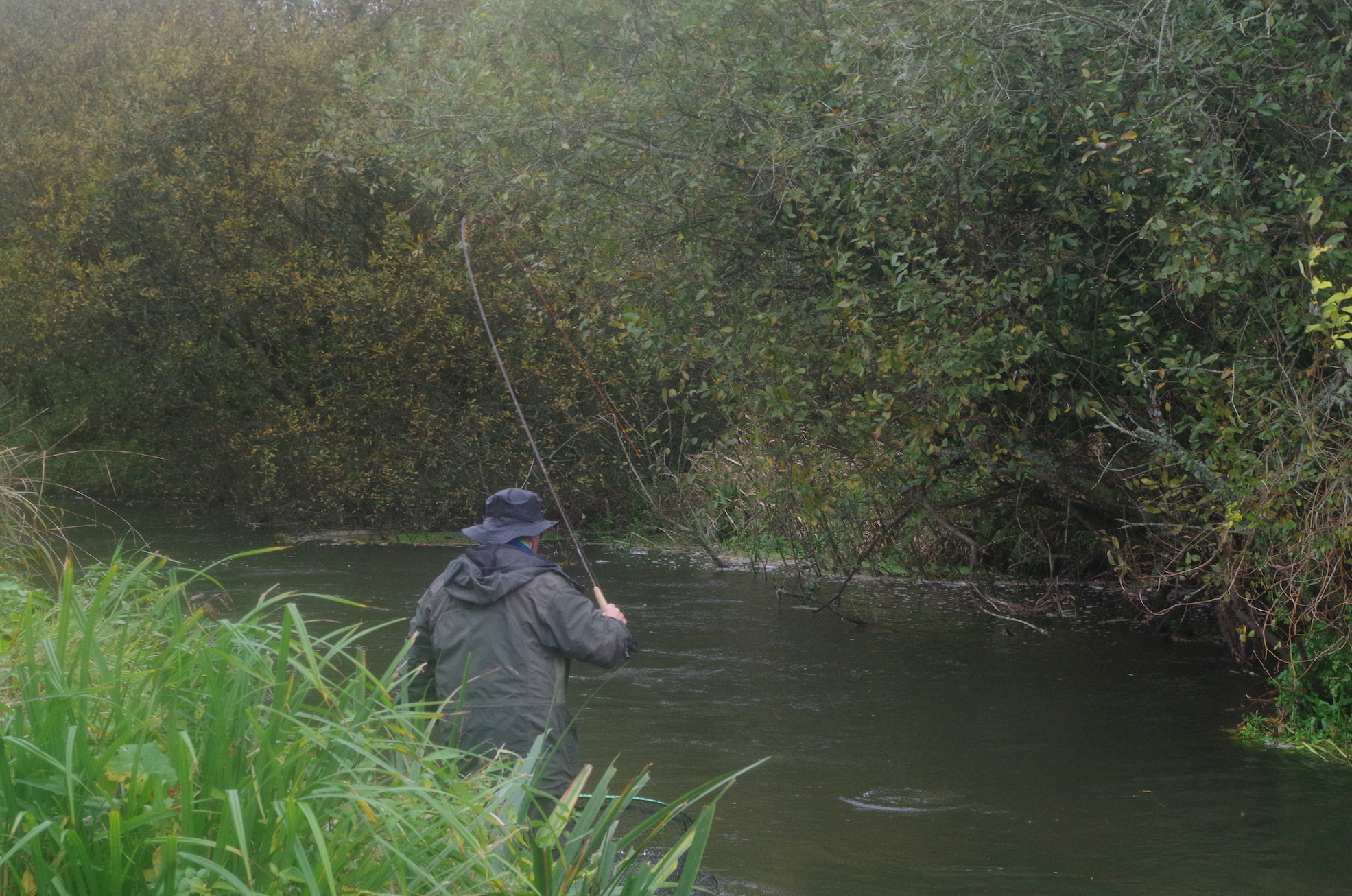 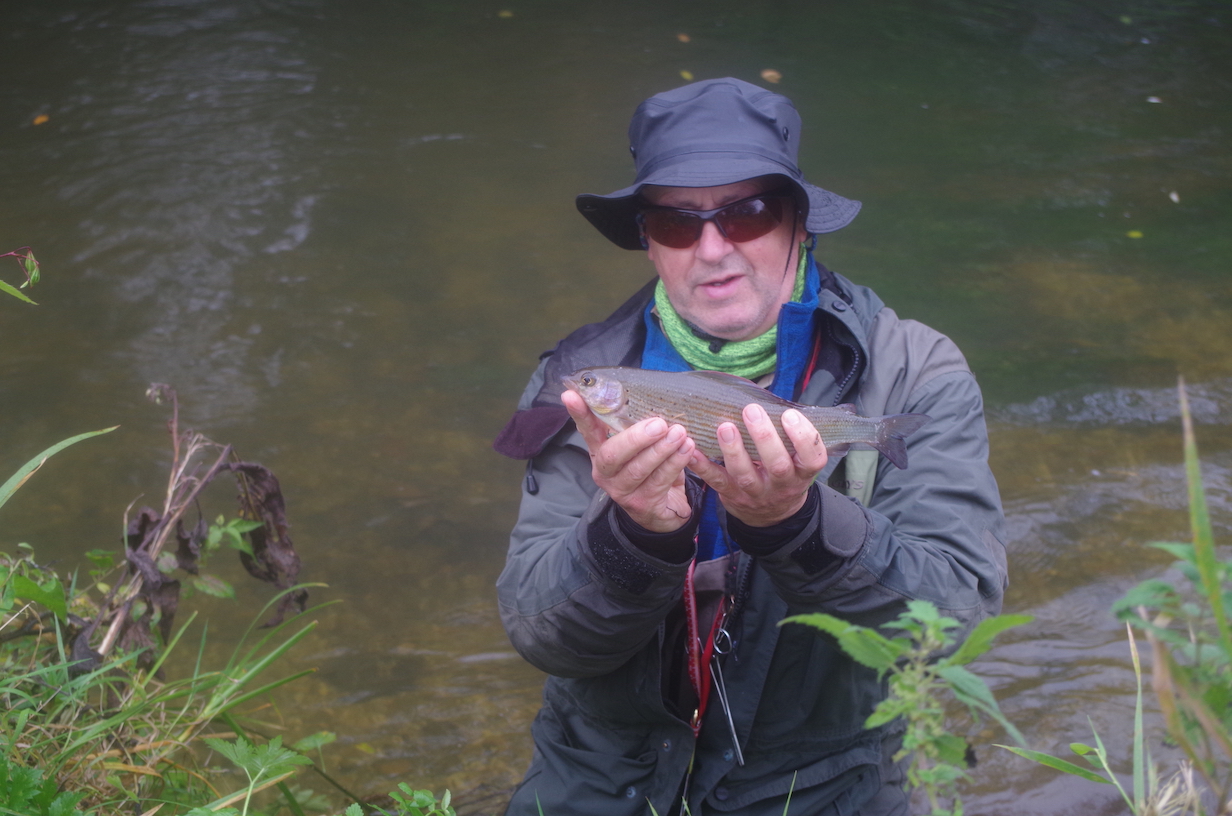 The day passed away far too quickly as most days beside the water do and I packed away the rods and waders as the light faded. I will return to the river again in search of grayling and maybe even in the height of summer when the water meadows will be lush and green, the river running crystal clear and wild browns will be supping mayfly as the river meanders quietly on.

The following day we headed for home two more anglers were on the River undoubtedly spurred on by news of my grayling. The grayling of the Frome grow to record proportions with fish caught in the past to over four pounds. This autumn has seen at least three fish of over three pounds tempted but these are not prolific fish. Such a grayling is hard won and I look back upon my success contemplating how small the margin is between catching the dream  or not. There are many hundreds of casts in a day on the river and with these rare and precious fish there is often only one cast that will connect with the top prize. 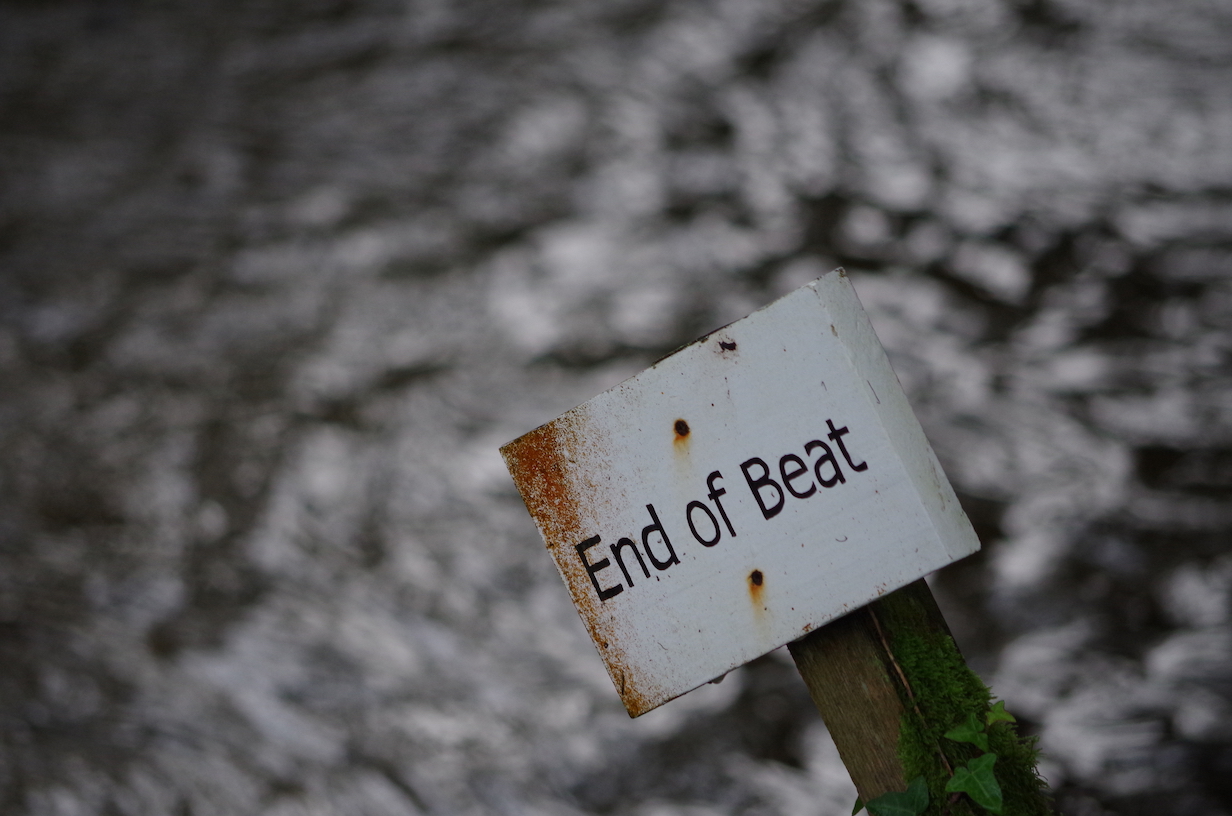