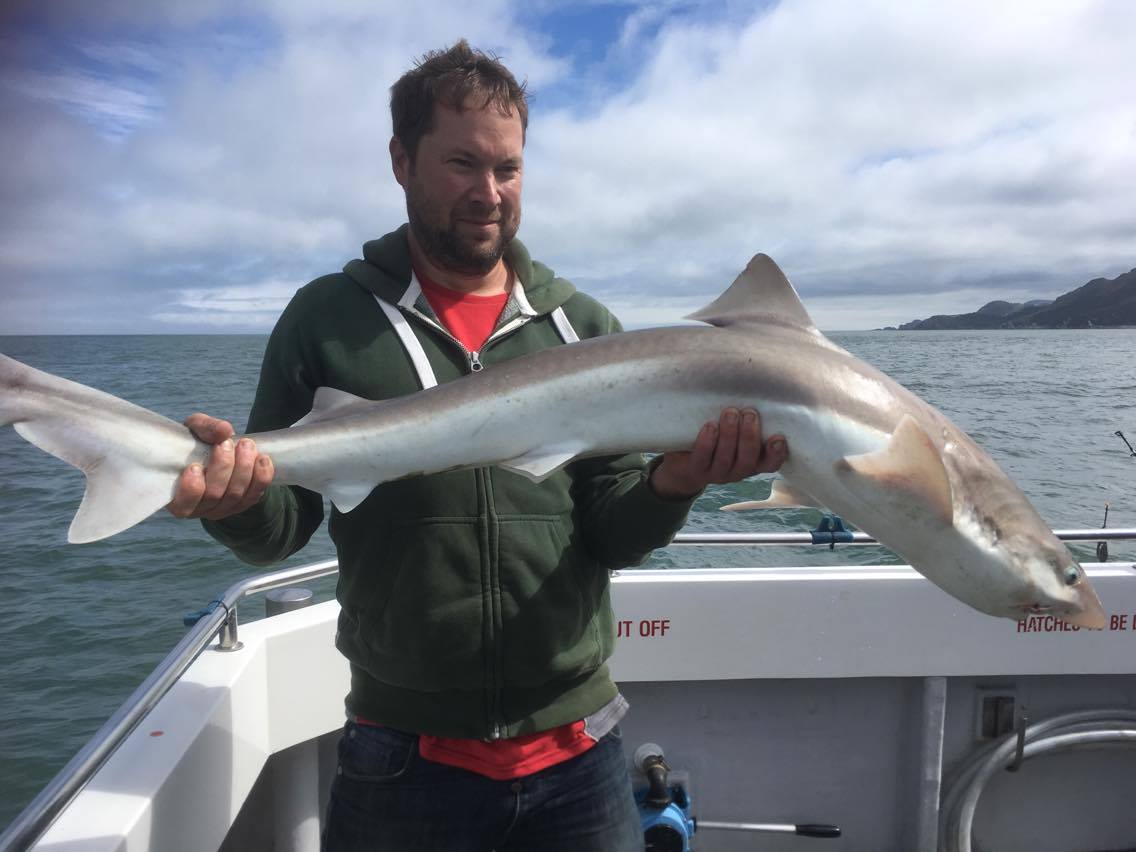 Tope are still showing Off Ilfracombe as Cameron Mckenzie found out when he landed this fine tope of 40lb whilst fishing on ‘Bluefin’ Off Ilfracombe. 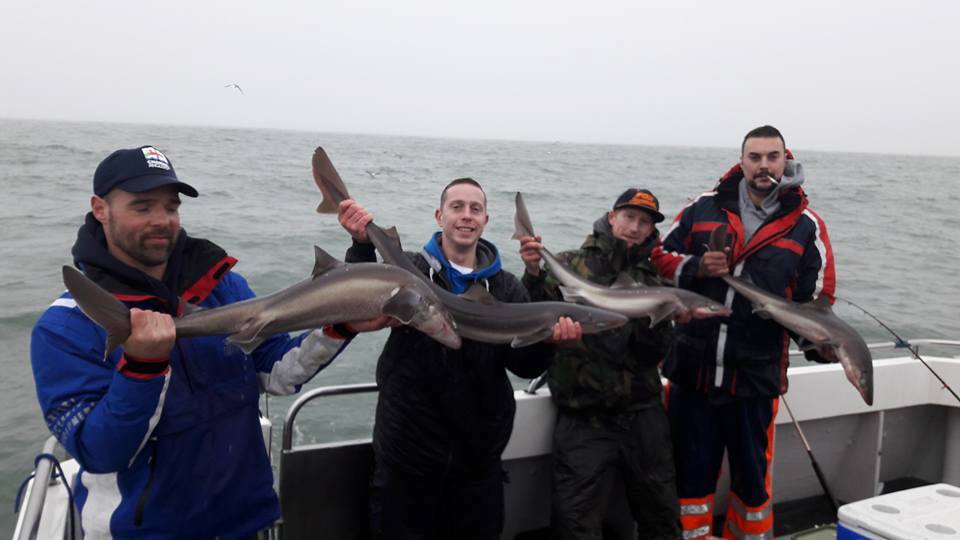 Well what a mixed day of fishing for it turned out to be for the Danglers, with frantic fishing for some and hard going for others. Plans were to hit the spurdogs aboard John Barbeary’s boat Blue Fin from Ilfracombe. As we steamed out into a mild swell and drizzle expectations were high, and with 3 of the 9 angler’s having never been after the spurs before, the old hands among us was were wondering if we hit the packs that John has found many times before would they keep up? Having reached the mark and with the anchor holding we all quickly got our baits, mostly squid and various fish baits to the bottom and it wasn’t to long before Paul Lorrimore hit into the first fish, a respectfull conger of around 20lb. A short while later Pete Gregory leaned into a tidy bite and landed what was to be the first of many double figure spurs, rods began to bend all over the boat. The fishing throughout the day was a tale of 2 trips, with the guys fishing along the sides finding the going hard work, although they all managed at least 3 – 5 spurs each with a few doggies and congers mixed in with those on the back having a frantic session with multi hook ups on many occaisons. Young Toby Bassett certainly being the guy on form, with quite often his bait finding fish as soon as he hit bottom. Though he did tangle my gear while I was playing a decent fish and jokingly said he was just fraying my braid, before my braid did break……obviously Toby got a bit of stick for the remainder of the trip but it was all just good banter as always with the lads. The 3 novices all got their PB’s with specimen spurs, with the largest spur of the day reaching 16lb and in total I would estimate at least 50 – 60 doubles were brought over the gunnels where they were swiftly unhooked and returned. 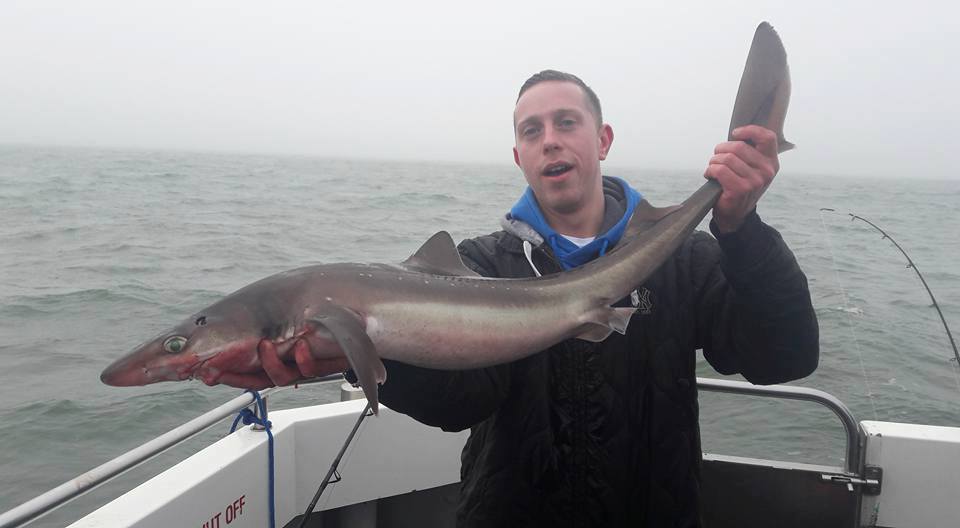 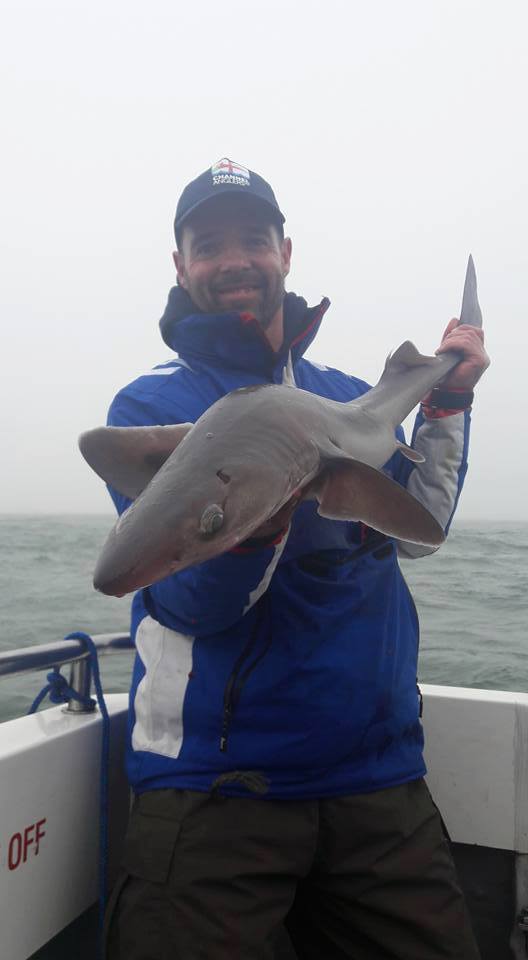 Anglers fishing aboard John Barbeary’s Bluefin have been catching some quality fish off Ilfracombe in recent weeks with bull huss, spurdog and big conger putting bends in anglers rods. Over the next few months spurdog numbers are likely to increase with every chance that someone will break through the twenty pound barrier. Thirty pound plus conger are frequently landed with a fifty plus on the cards if anglers have strong enough tackle. Whilst cod are elusive it would be no surprise if one or two big fish are tempted. 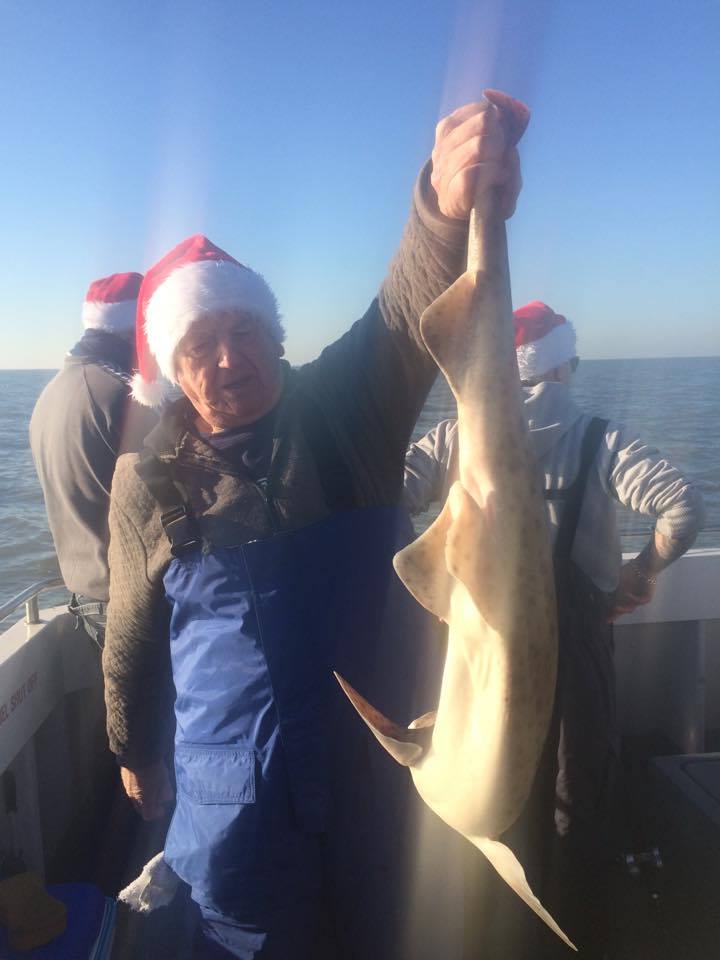 Dave Clements with a big huss of 15lb

Paul Lorrimore reports on a recent the 6 hour night trip on Board. John Barbeary’s ‘Blue-Fin’  off Ilfracombe with Troy, Pete and Rob. 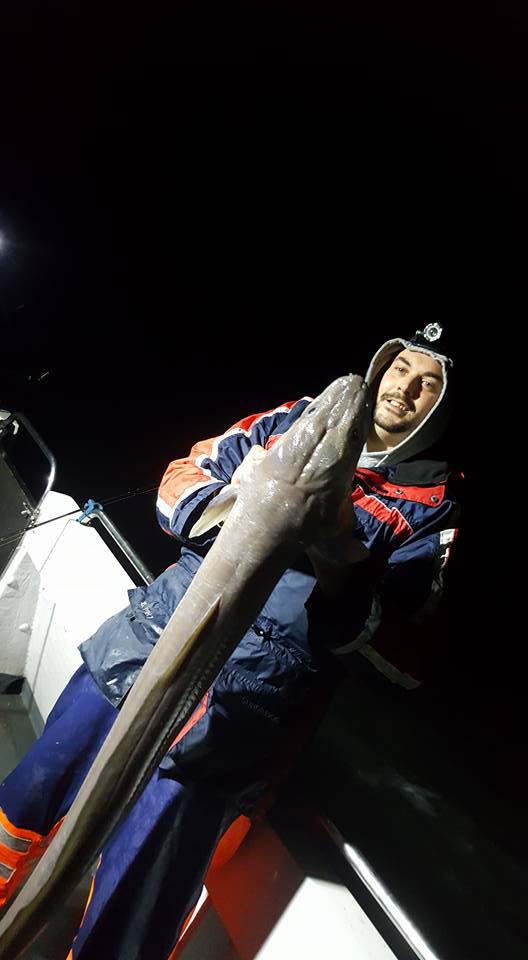 We steamed a mile down towards Lee bay intending to pass 45 minutes until we could push out to mid channel as the tide slackened off.
From the first drop it was clear the fish were moving in close under the cover of darkness as a smooth hound of around 6-7lb nailed my baited cod feathers.
Pete soon hooked into a good huss sadly lost at the side but would have been a good double.
More huss and smooth hounds came to the rail in short order along with a double figure eel to Pete. 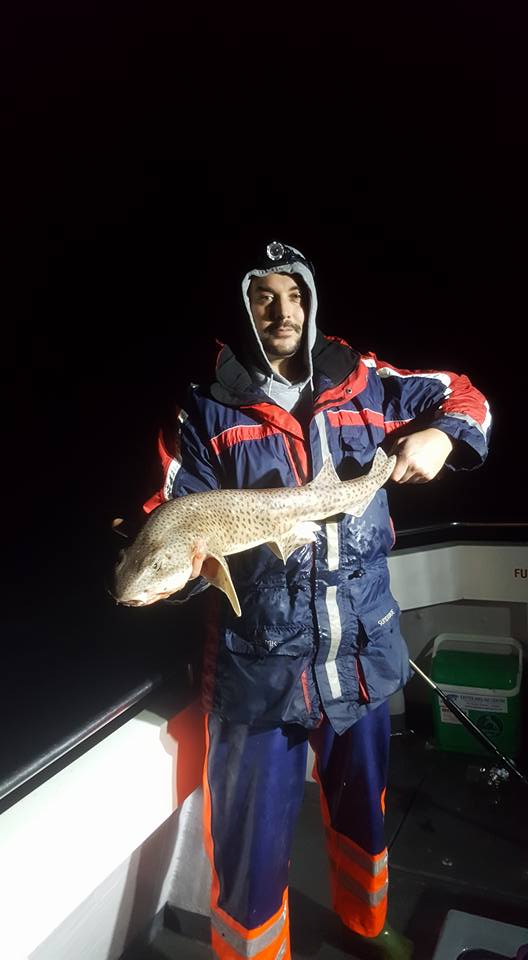 A small pack of spurdog hit the baits next with Troy and Rob picking up a couple along with a further smooth hound to Pete.
John gave us the decision to stay or move out, but as hard as it was to leave the grounds which by any normal standards would have been all you could ask for (John said its rare the fishing would be that frantic in daylight hours so close in) , we bit the bullet and pulled anchor with fingers crossed it was the right thing to do.
After 30 minutes steam we were deep in the channel and setting out our baits again with anticipation.
After 10 minutes with no action apart from a dogfish or two (happy to say we there were very few tonight) the spurs came on and several were boated along with huss and eels.
The next hour and a half had flurries of fish and i managed to pick up a nice but very angry eel of around 33lb which John was ecstatic(not) about me wanting on deck for a photo

The tide pushed in and the wind picked up making us drag anchor a bit to much to stay, so our sleepy crew headed home for a well earned rest

One things for sure, it wont be the last night trip on the Fin if this was anything to go by.