I used to fish with Tim Tanton on a frequent basis years ago when he was a keen sea angler and member of the Combe Martin SAC and have kept in touch from time to time via Facebook. I know that Tim like myself has strong views on the importance of the environment so when I saw  a post regarding  litter and in particular angling related litter I asked Tim if he would write an article for North Devon Angling News and I hoped his words would carry more weight than mine. I have had previous rants about litter and have joined in with beach cleans and inspired angling clubs to organise their own. I do not believe that anglers are worse than others in society but I know that a significant number of anglers seem to have little or no respect for the beautiful coastline they visit. I cannot understand how anyone can find it acceptable to intentionally leave litter. The occasional loss of tackle to snags is inevitable and I am sure we have all had that moment when the wind catches a bait wrapper or something and blows it out of reach into the sea. The litter we see on the coastline on a regular basis is not accidental its just pure ignorance and a selfish disregard for the coastline its wildlife and those of us who want to visit and fish a pristine and wild landscape.
Many thanks to Tim for writing and providing images to illustrate his view of the litter that blights our coast. The litter issue is indefensible and it loses fishing and give angling a very bad name.
Most of the images below were taken in the vicinity of one popular North Devon Rock Mark! 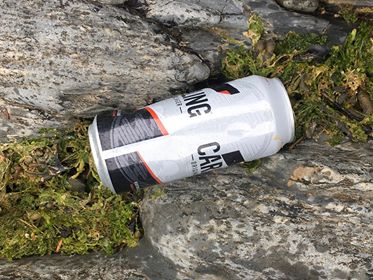 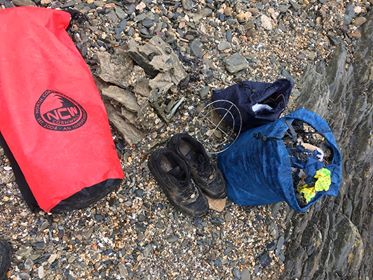 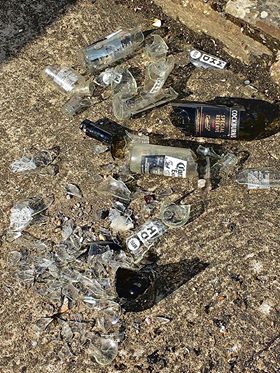 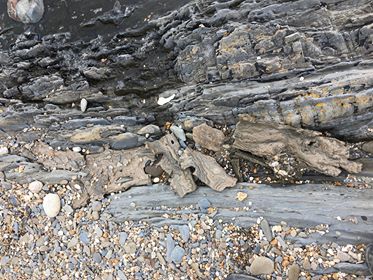 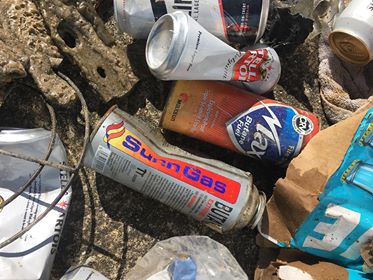 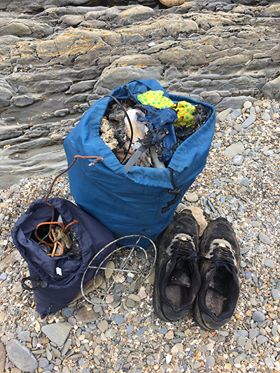 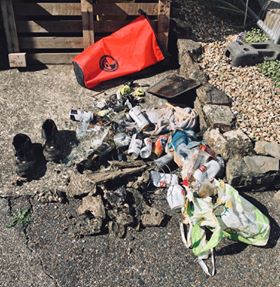 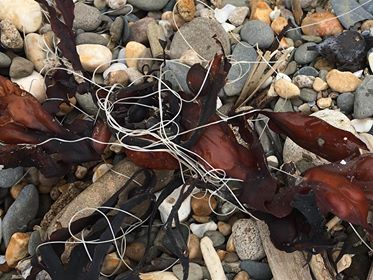 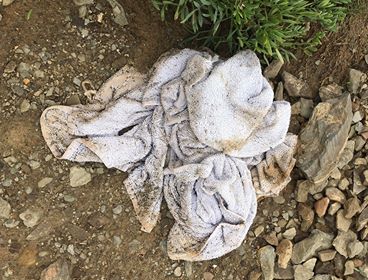 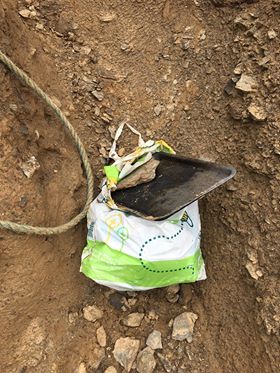 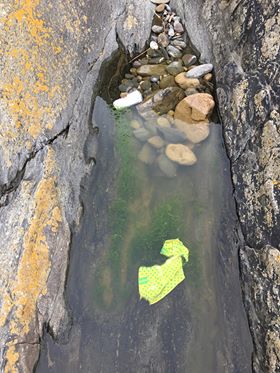 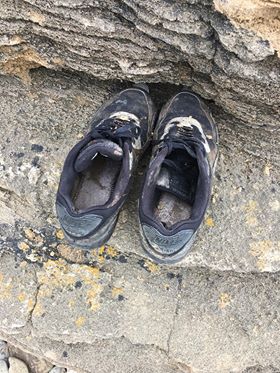 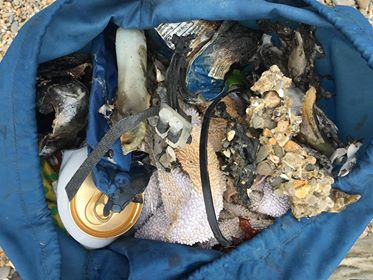 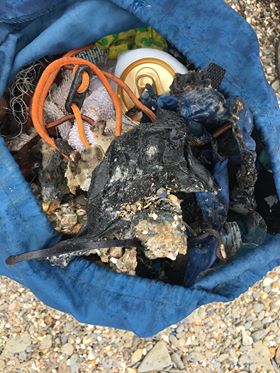 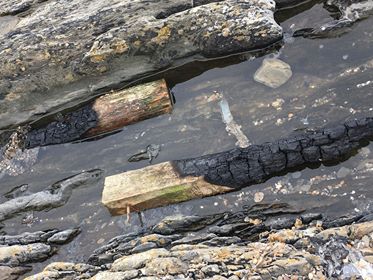 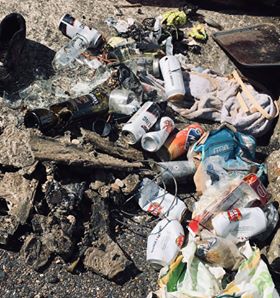 Oh for sure, it’s not just anglers. Much of it is young people. There is the vanlife element too. Cheap imported throw away tents etc. Where to you start and finish. And also without any element of racism, Eastern European and Asian. It’s is also locals and visitors. Poorly educated or middle class, it’s across the board. It’s all too easy now.
Way too much plastic involved in fishing rigs.
Apologies for any intrusion but the masses appear to think they are entitled to visit, and if services and resources not provided, tough ……. not their problem. Many won’t return to see the damage they cause. I could go on, but I would get very non pc ………
An example in Sri Lanka, more people arrested for breaking curfew than people testing positive for Covid-19
The reaction of some to my recent Instagram post, was of making excuses for those that smashed and burnt the items
Quotes like, they probably haven’t been taught at school that it’s wrong. That they’ve not been educated. Unbelievable some people. I had another prospective sponsor but I’m feeling I’ve lost him, through his belief that it’s not their fault! Ffs!
Alas we are now having generations of entitled that pass it down, and then the good start feeling oppressed by it all, and then say ‘feck it’, I’m done with clearing up after others
I never not come back with rubbish. If I park and there is rubbish near my van, I pick it up. If I fish, and see discarded line, bait wrappers, trace packets and food packaging, I pick it up. If I surf, and walk back up the beach, and see something, I have a spare hand, and pick it up. If I walk a friends dog, I carry the poo the whole distance and also pick up rubbish. Most walkers and dog walkers do not pick up rubbish. Fact! I watch them. It takes just the two minutes to make a difference

I organised beach cleans in the past at Saunton, as part of the charity, Paddle4Relief, I founded back in 2005. Didn’t get any official help back then. Only other organisations sending me their flyers etc
Only during lockdown did we actually get to enjoy the clean beach for less than a hour, but it was good, and each trip a little more rubbish was collected and at the end, there was no rubbish …….. and now it’s back again

It scares me that my first thought is to kill them. That this world does not need these selfish ignorant lazy disrespectful entitled idiots. A quick 9mm and the planet is spared their toxic attitude. Alas the nanny state find excuses for their behaviour and wrap them upon cotton wool, and protect them, so as to create another generation of idiots 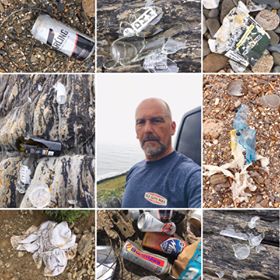 I hope that this opportunity for Tim to speak out will make a difference. It is my view that we all need to speak up and make it known that this is not acceptable. If enough people make it known their disgust then just maybe we can shame these members of society into keeping the countryside clear.
There are a few things we can all do;- 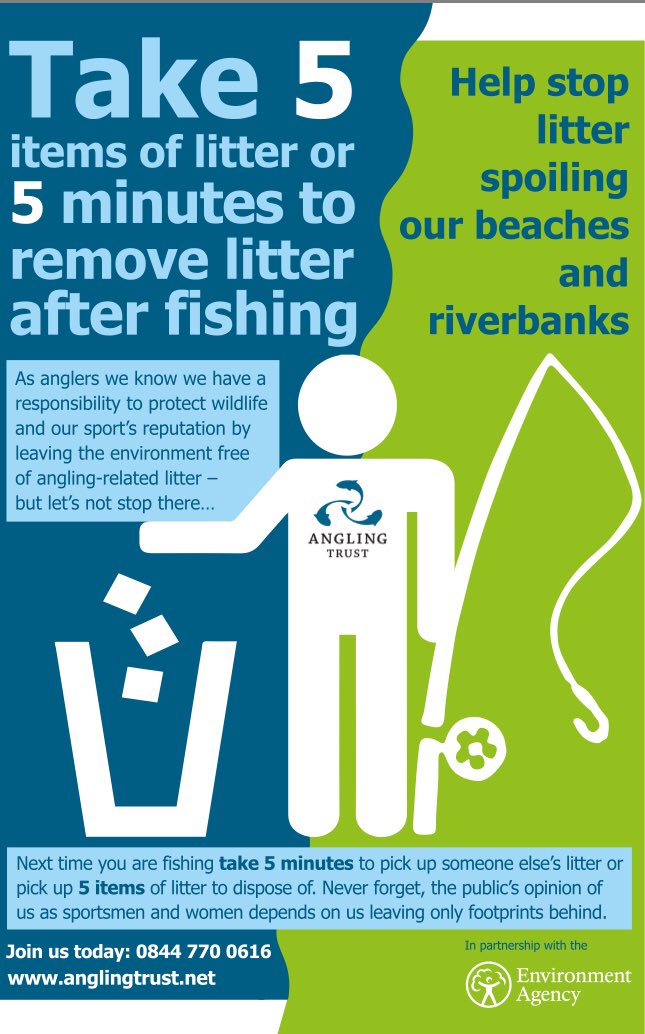 Don’t leave litter .
Pick it up and take it away – The Angling Trust had a take 5 campaign.
Think about the rigs we use and how we can reduce tackle loss.
Use the national line recycling scheme.
https://www.anglers-nlrs.co.uk 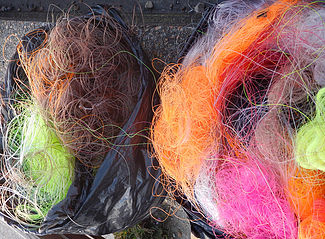 Last year I reported on a local angling clubs efforts to clean up their local sea angling venue following threats to close it off following unacceptable litter left by careless and uncaring anglers.

Anglers embark on Beach Clean to show they care

Sadly a year later I still get reports of issues relating to angling litter and whilst anglers are not exclusive in leaving litter they should be appreciative of the environment that is surely an integral part of what angling is about? I recently received this sad image of a popular North Devon Rock Mark the angler who sent this is to be commended for picking up the rubbish and removing it from the venue. We must all make every effort reduce litter and leave nothing at the waters edge accept memories. 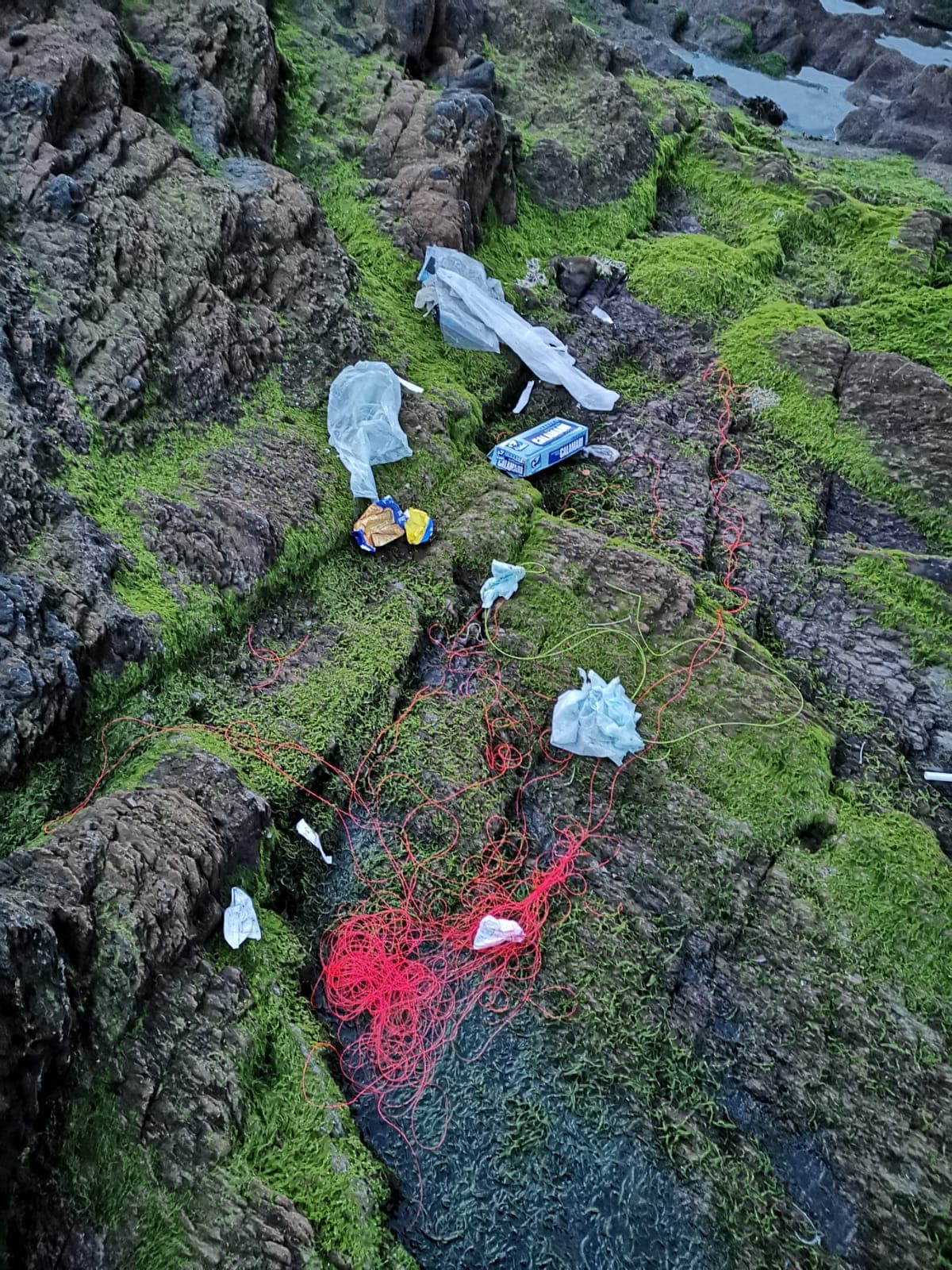 Line is one of the major angling related litter issues and a new scheme is being launched to encourage responsible disposal. I will be speaking with local tackle shops and perhaps clubs to see if we can get access to the scheme here in North Devon. 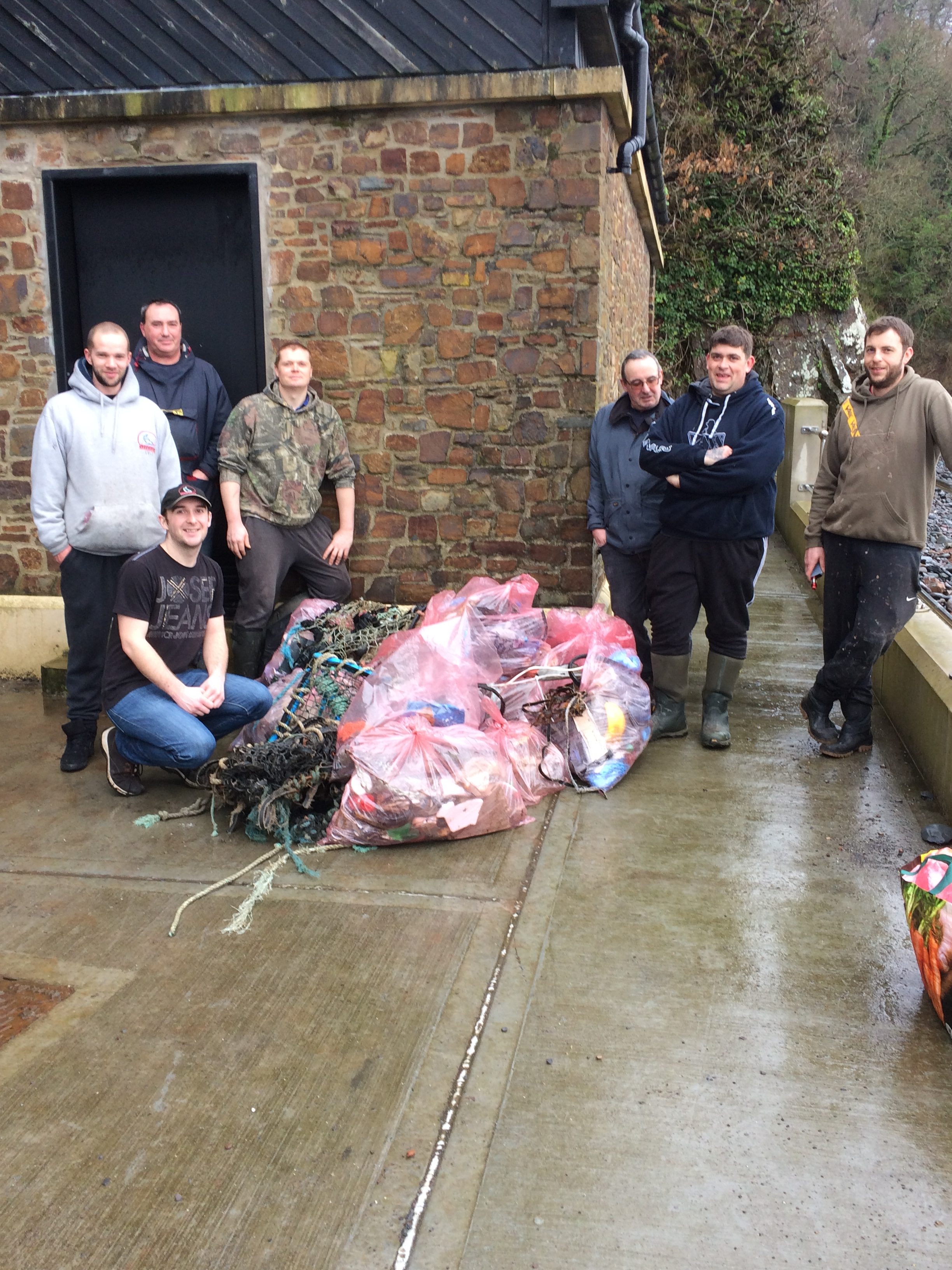 I joined seven members of Bideford & District Angling Club at Clovelly this morning to carry out a beach clean of the foreshore and harbour area. Following issues with angling related litter Bideford Club were determined to show that anglers do care and condemn those who drop litter and tarnish the majority of anglers who do take their litter home. In all we collected 16 bags of rubbish of which I would estimate 1% was angling related. The vast majority of the litter was plastic and its long levity was illustrated quite starkly by this old Ski Yogurt pot that  I googled to find it probably began its life in the mid 70’s. 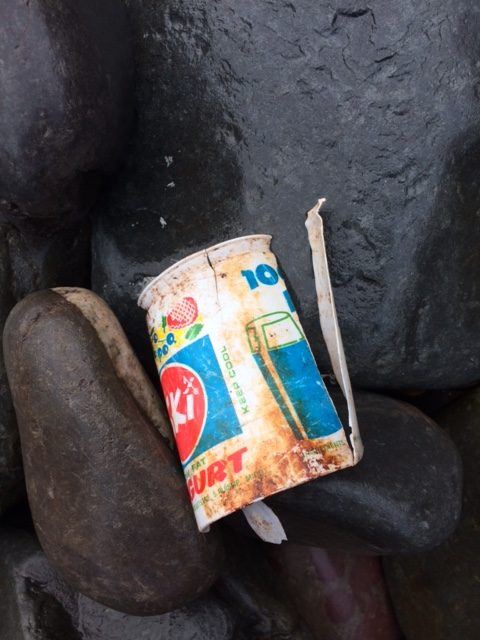 Children’s plastic toys were also abundant along with plenty of household containers. Some of the debris has undoubtedly come from waste that had been dumped on the cliff-side by villagers in times gone by to be dislodged as the cliffs subside and the sea pounds the upper foreshore. Giving up a couple of hours to pick up the unsightly waste from the foreshore brings home the immensity of the plastic and waste issue that is caused by our modern lifestyle. There is a minority of anglers who add to this problem with their own debris but society has a big problem as could be seen as I drove home along the Atlantic highway with its littered verges. 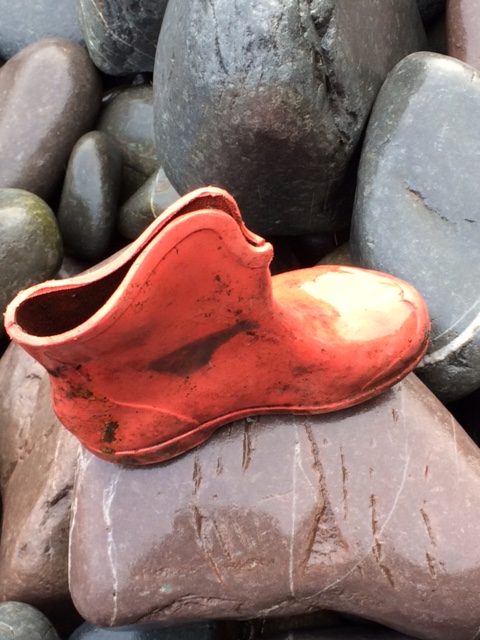 Once again I am prompted to mention the contentious issue of litter and angling. Last year there was talk of a ban on angling at Clovelly as a result of anglers leaving litter, bait and urinating against the harbour wall. Clovelly is a picturesque village that is currently in the running for Channel 4’s Village of the Year with Penelope Keith. it is completely understandable that the owners of the village and the community do not want their beautiful village to be tarnished by irresponsible anglers who undoubtedly have no respect for the environment or local community.

When I have posted about this previously I have provoked  strong protestations about this issue with many anglers condemning the culprits. This vitriol on Facebook and social media achieves little. In my view local anglers need to take action and work with the Clovelly Estate to address this issue. As Bideford and District Angling Club are closest it would be useful if they could take the lead and I have contacted them to this end and the issue will be discussed at their AGM. I would hope that anglers from other areas of North Devon will join in with a possible beach clean and show that we do care. If this is considered a good idea I will promote the event both here on NDAN and within my Angling Column in the NDJ.

It may well be that there is a need to control angling access in future so that any culprits can be identified and banned from future visits. 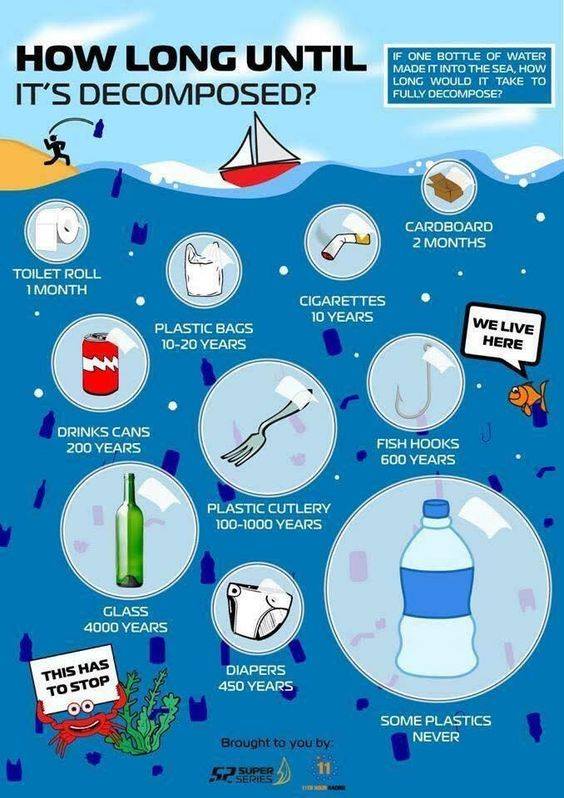 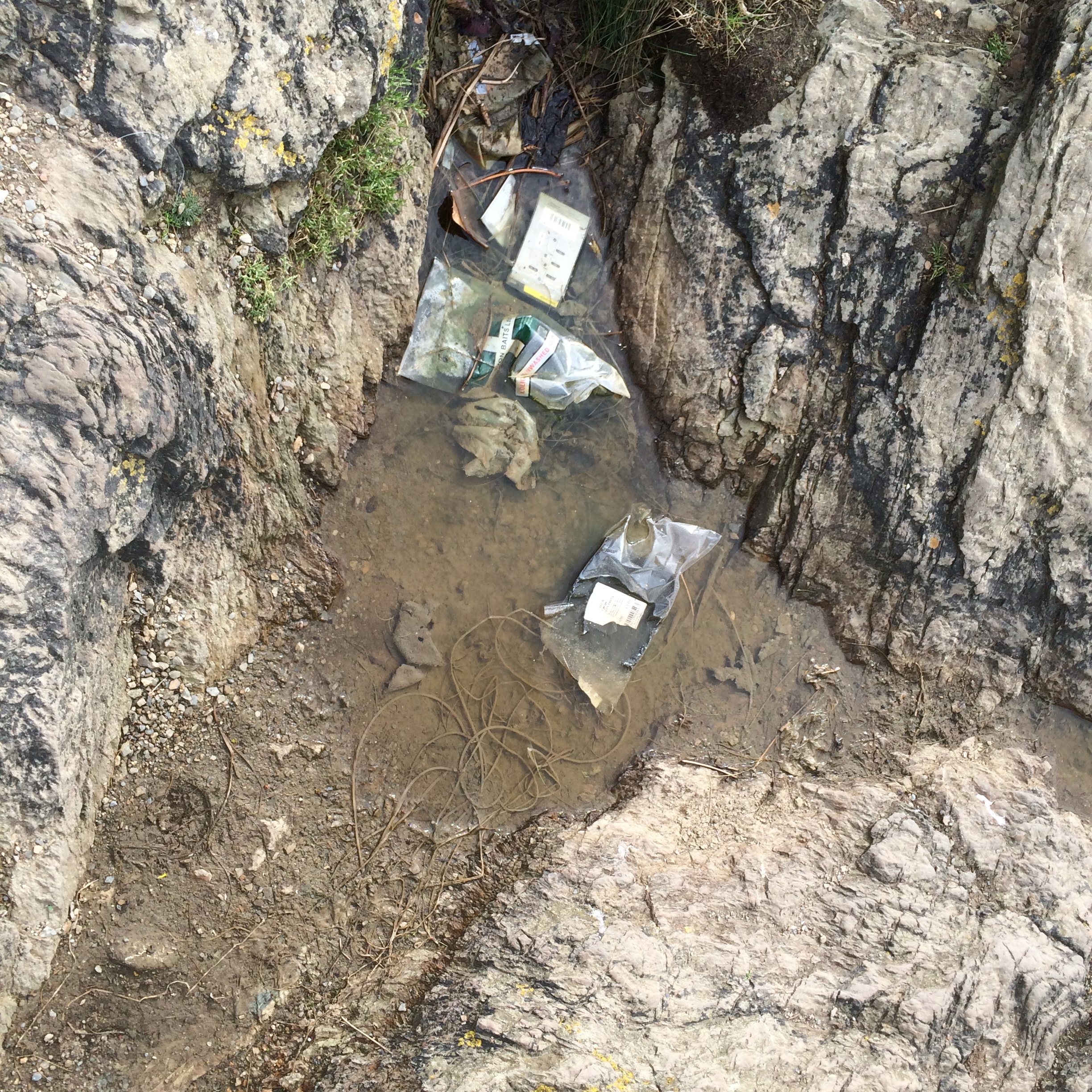 I have just heard of a threat to a popular local fishing mark as a result of the idiotic behavior of a few anglers. This unfortunately is a very common problem that has lost anglers access to many marks across the country.

I took the above photograph earlier in the year whilst on holiday in Cornwall where we visited a picturesque viewpoint that overlooked the stunning River Fowey. There were no anglers present at the time except me, I was not fishing just admiring the view. A young couple scrambled past and I heard them remark about the disgusting stench. The smell of stale urine hung in the air and the detritus that lay around was a clear sign of the culprits. At that moment I felt ashamed to be an angler.

There is no excuse for leaving the places we fish in such a disgusting state, litter should be taken home. Ensure leftover bait is discarded with care, if its not going to be taken home then ensure it goes into the sea where it will be washed away and eaten. Never leave hooks and traces lying around, there have been numerous incidents with dogs becoming injured resulting in costly visits to the vet. The stench of urine is another blight on the anglers who should either use the public toilets or have a pee where the tide will wash clean.

Many of the places we fish are shared by sightseers who want to sit back and enjoy the beautiful scenery that North Devon has to offer. What do you think there reaction is going to be when the place stinks of urine and the ancient cobbles are strewn with litter. If it was your property would you welcome anglers?

I know that some of you reading this will be guilty of the above and that my words will fall on stony ground. Angling is a wonderful pastime, pursued in stunning surroundings and I have often sung the praises of what anglers do for the environment and how they care about fish stocks. Those who leave behind their dirt tarnish us all. I have written this in the hope that it will make a few think about their actions. If it doesn’t then don’t grumble when we lose another easily accessible fishing mark. Don’t walk by if you see litter pick it up and bin it.