Fly Fishers have enjoyed a splendid season at Wimbleball Reservoir with regular stockings of quality rainbow trout throughout out the season.

I enjoyed some exciting sessions at the venue in the spring but have struggled to get back during the summer months with other fishing trips and lifes demands conspiring to keep me away from this delightful venue high on Exmoor. With reports of some stunning rainbows being caught during the autumn I was determined to have at least one more session before the seasons close at the end of November. 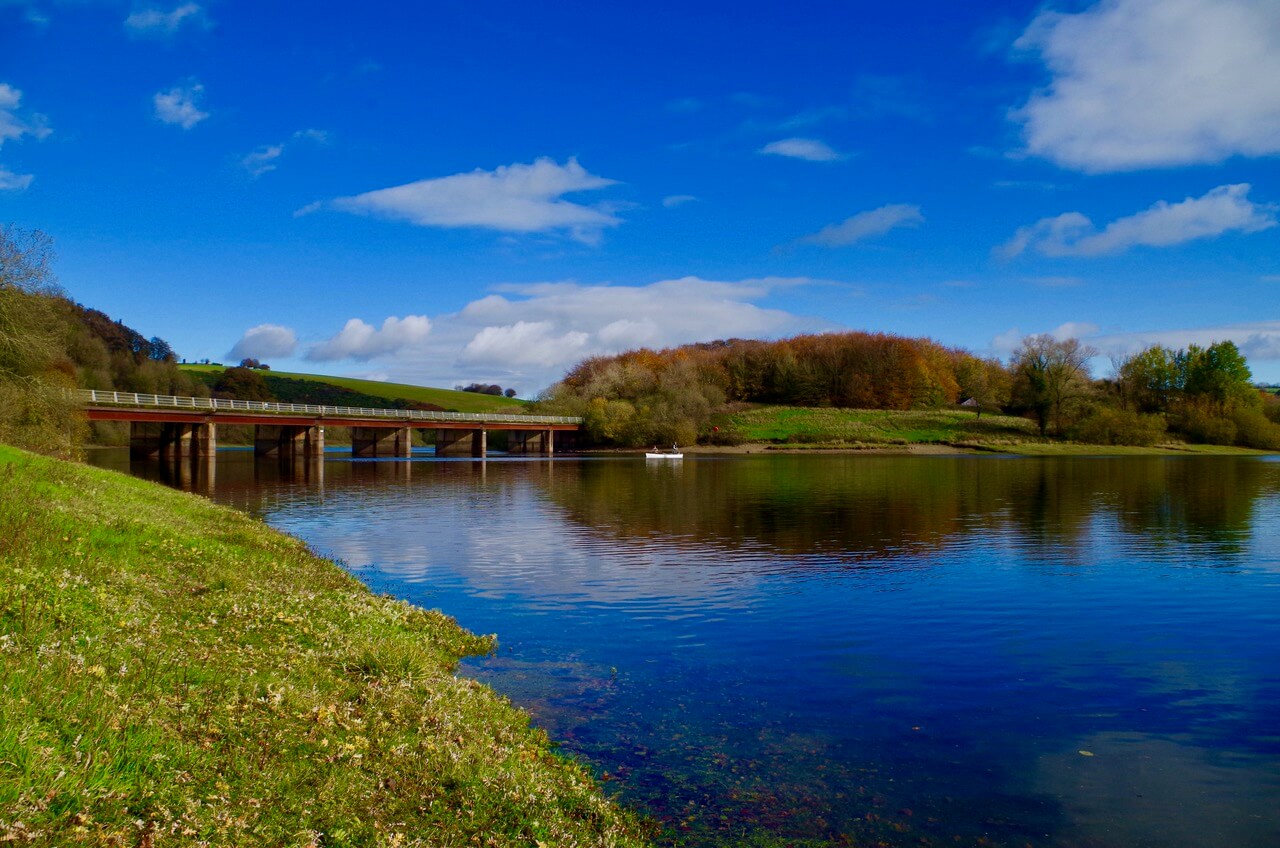 Whilst the North Devon coast was tempting I decided I must take the fly rod and try for a reservoir rainbow. After the big storm that had blown through on Saturday I wondered what the water clarity would be like as I arrived on Sunday morning. To my relief the water was crystal clear and sparkling in the late autumn sunshine.  A brisk Westerly breeze was blowing across the lake into Ruggs Bay where I started my session. After half an hour or so without a pull I decided to move to Bessoms Bank opposite where the wind would be blowing over my shoulder, This was also the area that appeared to be fishing well according to the catch returns in the fishery office. 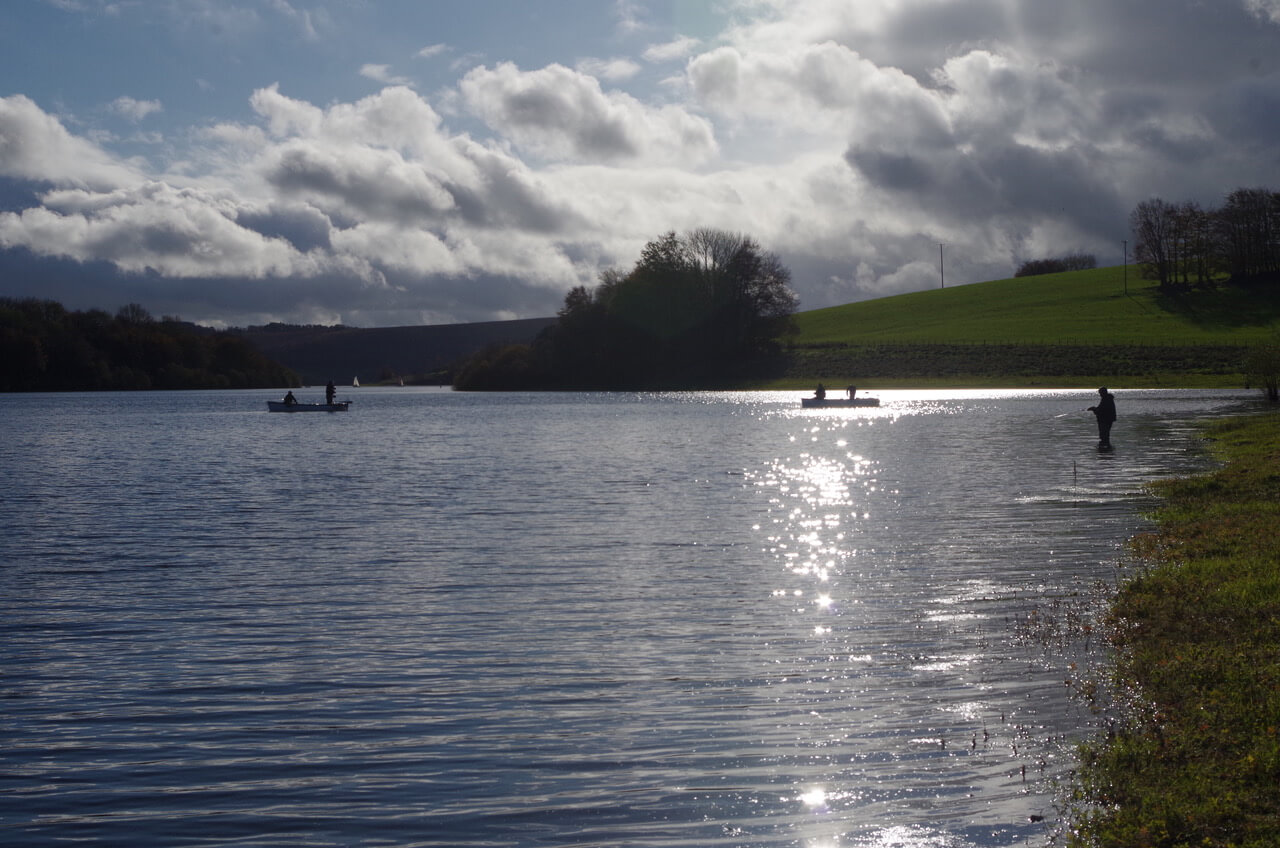 A couple of other anglers were already fishing this area and boats were drifting off this bank indicating that a few fish were probably about. It was encouraging to see several fish rising within casting range of the bank especially with it being November 3rd. I was fishing a team of flies with a floating line, Montana on the point and buzzers on the droppers. After ten minutes a fish rose at the limit of my casting range and I dropped my fly bang on target! One pull, two pulls and there came that satisfying thump down the line. The rod hooped over and several yards of line disappeared through the rod rings. A near fin perfect rainbow of around 3lb was soon safely in the net. 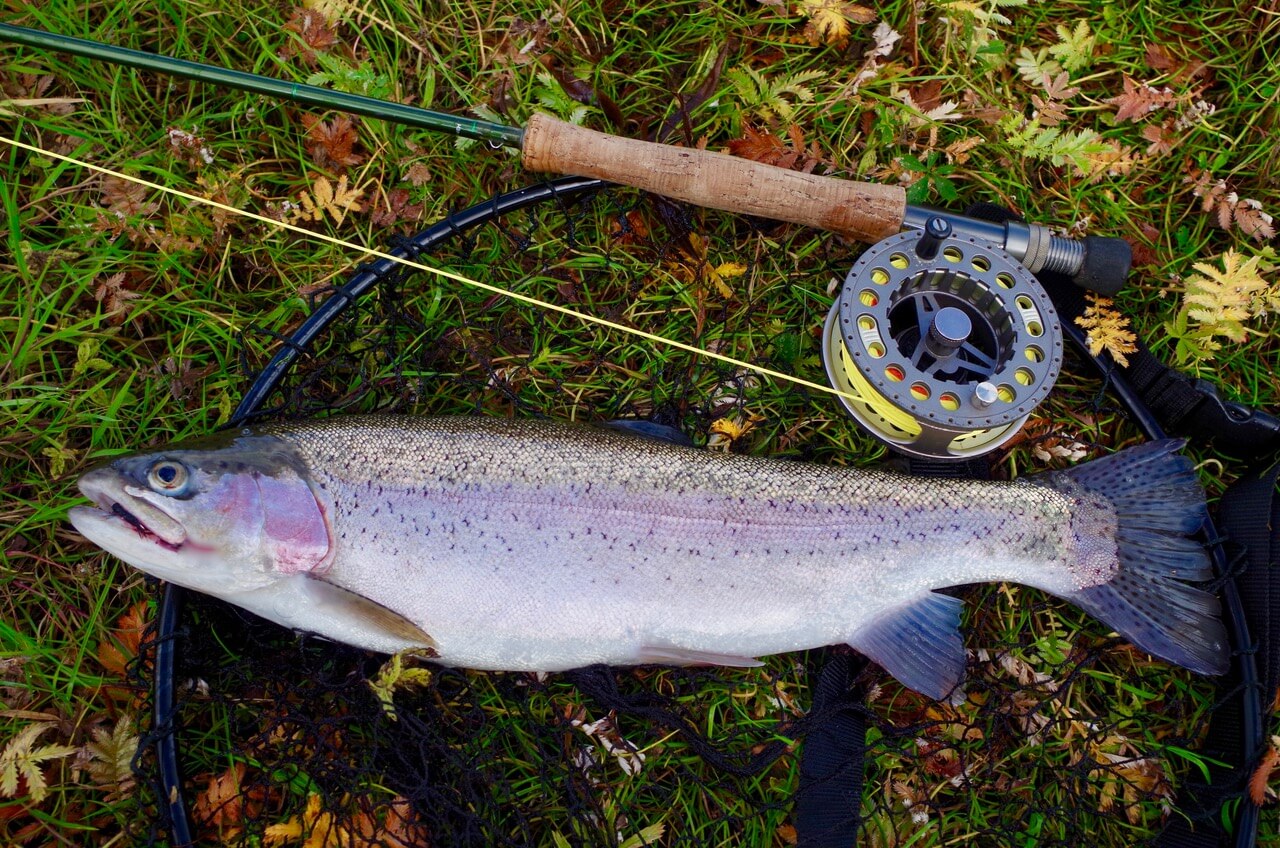 I persisted with the floating line set up for a couple of hours briefly feeling one other fish. With few fish rising as afternoon set in I changed over to a sinking line and a lure with a long black marabou tail and silver head. After ten minutes a solid take resulted in another hard fighting rainbow of a similar size to the first. 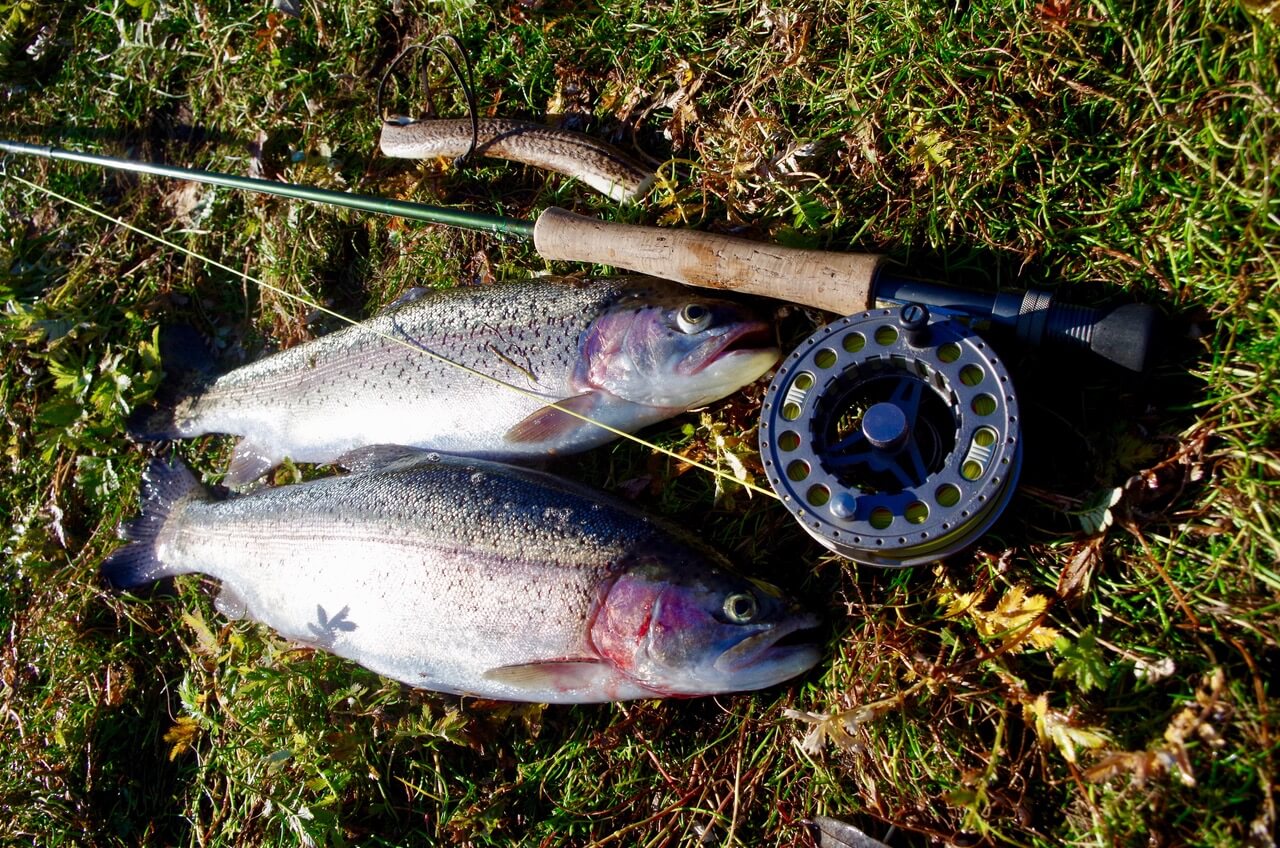 With two trout in the bag I now ensured that I was using barbless flies. For a while I persisted with the lure and sinking line approach and had several follows and swirls, I glimpsed what looked like a very large brown trout following the lure right to waters edge. After this all went quiet for a while and I reverted back to the floating line for an hour without success.

With no activity on the surface I again swapped over to the sinking line and lure approach. After ten minutes a beautiful brown trout of around 1lb seized the lure and was slipped free without removing from the water. Next cast brought a solid take from another brown trout that was pushing 3lb this was returned immediately as being on my own it would be difficult to get a decent picture.

As the light started to fade heavy rain began to fall and I decided it was time to head for home. It had been a very enjoyable day with a couple of good trout for tomorrow nights tea a pleasing brace of browns returned and that monster glimpsed to come back for next time. I slipped back into the permit office to make my return and checked out what others had caught. Plenty of stunning rainbows to over 5lb had succumbed with several multiple bags of fish. I could have done better but at least I had caught a few and enjoyed my day. I will be back in the spring. There are over three weeks left of the season and there are some stunning rainbows waiting to be caught from what has to be the West Country’s best large Stillwater. trout fishery.

Its great news for Fly Fishers at Wimbleball Fly Fishery where the season has been extended until the end of November. Its been quite a season with the quality of the fishing surpassing expectation during a difficult year for trout fishing. Throughout the season anglers have enjoyed sport with tail perfect hard fighting rainbows and wild brown trout. 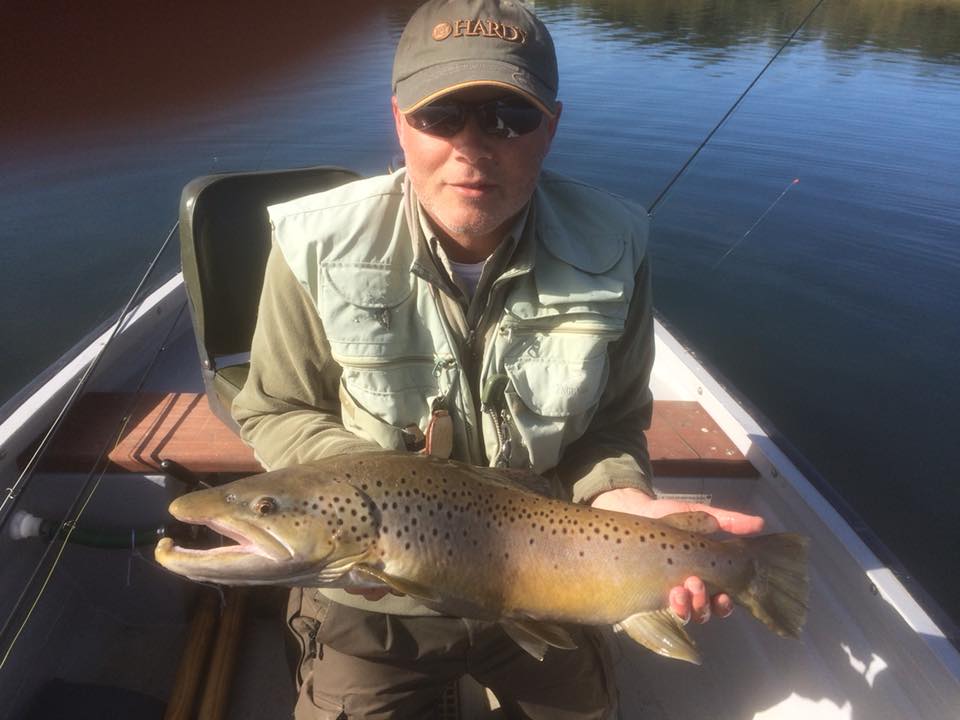 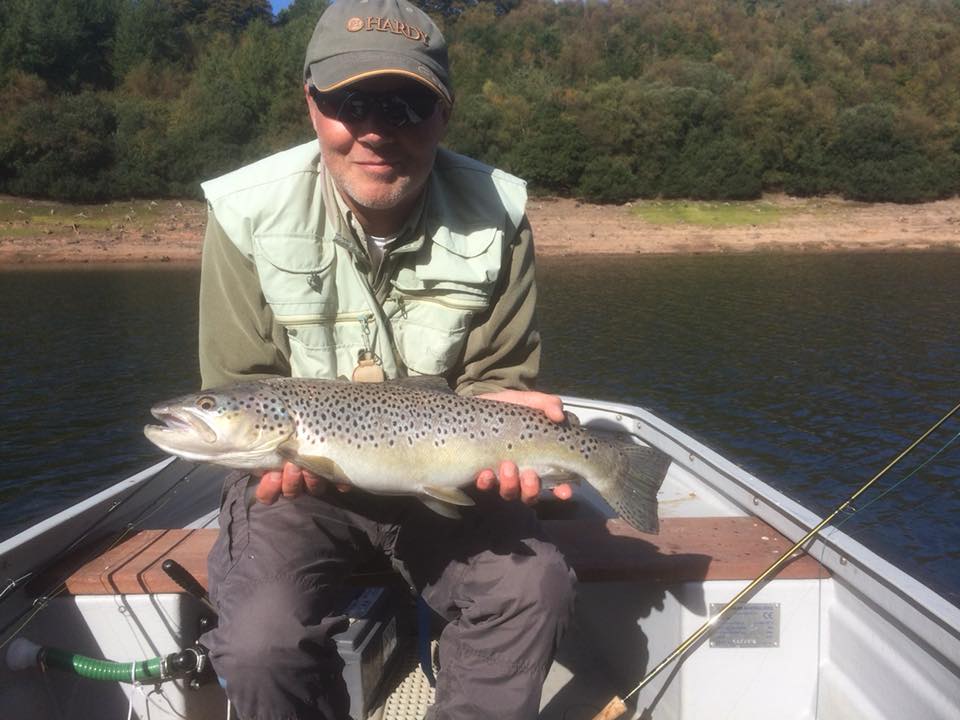 (Above)The 2 browns caught by Duncan Kier, the smaller one from Upton arm and the larger from Bessoms.

Duncan Kier and boat Partner had 11 fish to the boat which included a 5.5lb and a 8.5lb Brown.

The Withers, Father and 2 sons, caught 17 fish from the bank at Cowmoor of which 6 were browns.

An excellent evening fishing on Bessoms yesterday. Despite the cold wind, there were 5 anglers. Fish rising, fry being chased, rods bending. I had to pull myself away after taking 2 well sized rainbow trout whilst missing others. Before fishing, I’d read that the “Clifton” used to be the fly of choice. I quickly tied 2 and can say, yes, they work. Savage takes. The smaller version was more successful! Size 12, very short black zonker wing, chartreuse tag, peacock body, red seal fur on the head with a little UV. Wish I had more. Suggest a minimum of 9lb 12′ leader. Steady retrieve with lots of pauses. A big thank you to Mark and Trudi.

“Today was my day on the bank at Wimbleball and what a day, lovely wild Brownies and scintillating top water sport with super fit, super fast full finned Rainbows taking me into the backing, a C&R ticket allows you to keep two for the pot then go barbless and shake em off.
Check it out I can’t recommend it enough…..Chris”

“Great day yesterday for Mike Stone and boat partner they had 24 fish to the boat drifting right down the middle of the narrows towards Bessoms.”

“Storm Ali and it’s leaden sky’s didn’t stop Ian and myself enjoying superb sport from the bank at Wimbleball today, these rainbows coupled with wild browns were eager to take our offerings, fish were moving close to the bank just as the clean was meeting coloured water disturbed by the gale force wind!” 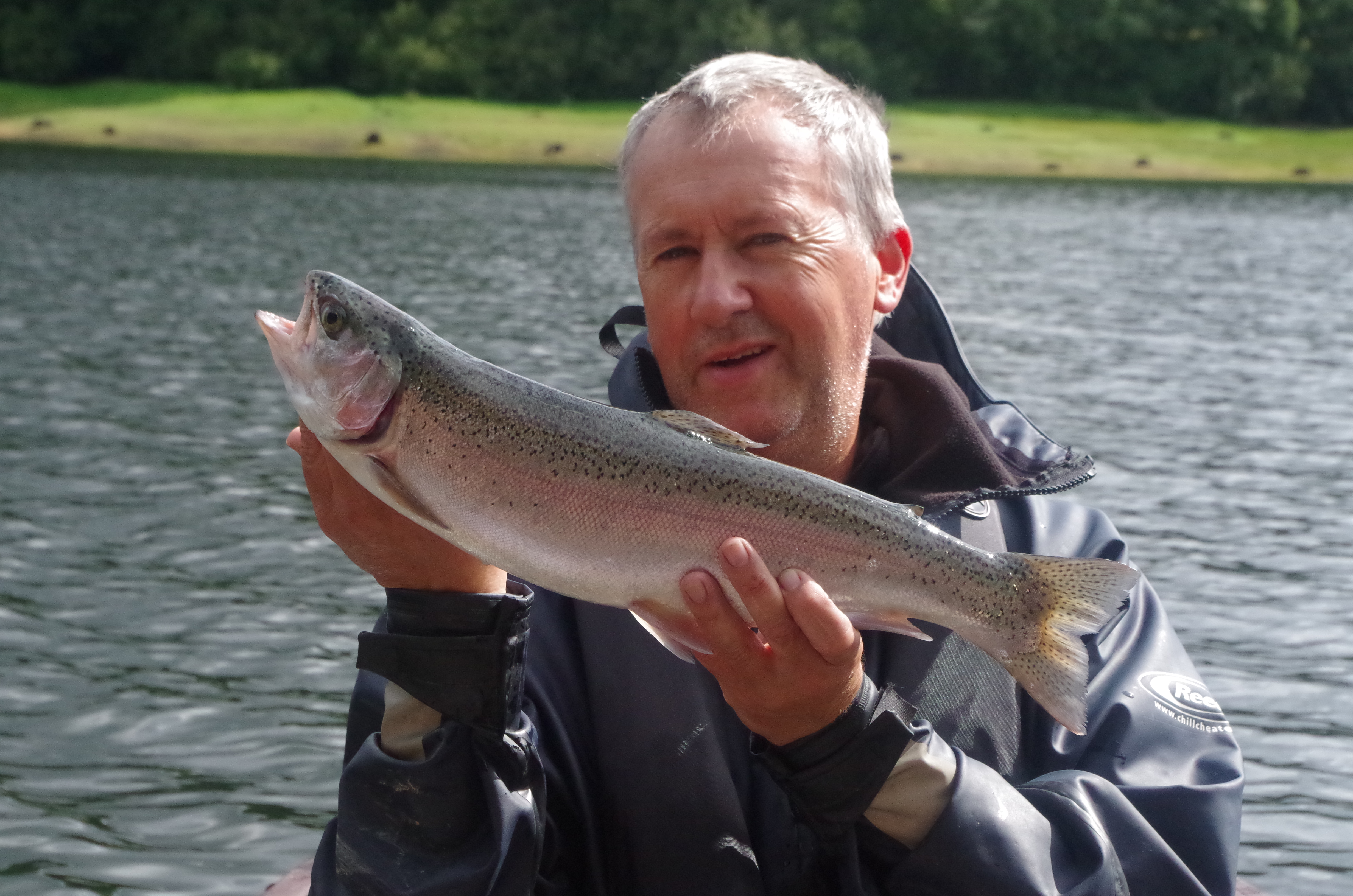 I visited the lake back in March and hope to return once more before the close of the season on October 31st. Late in the season trout often feed on fry so lures can once again prove effective as can daddy long leg patterns and nymphs. 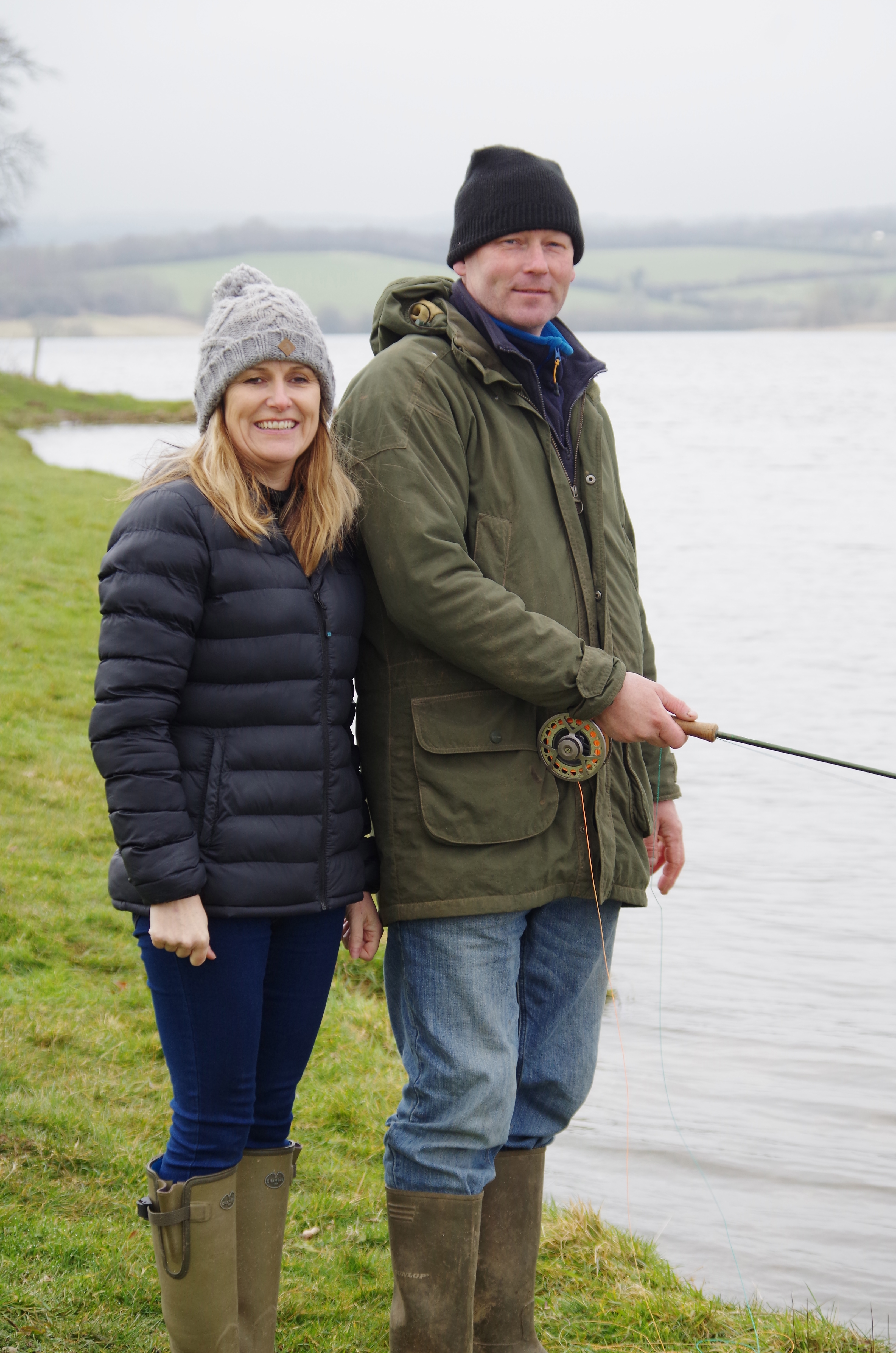 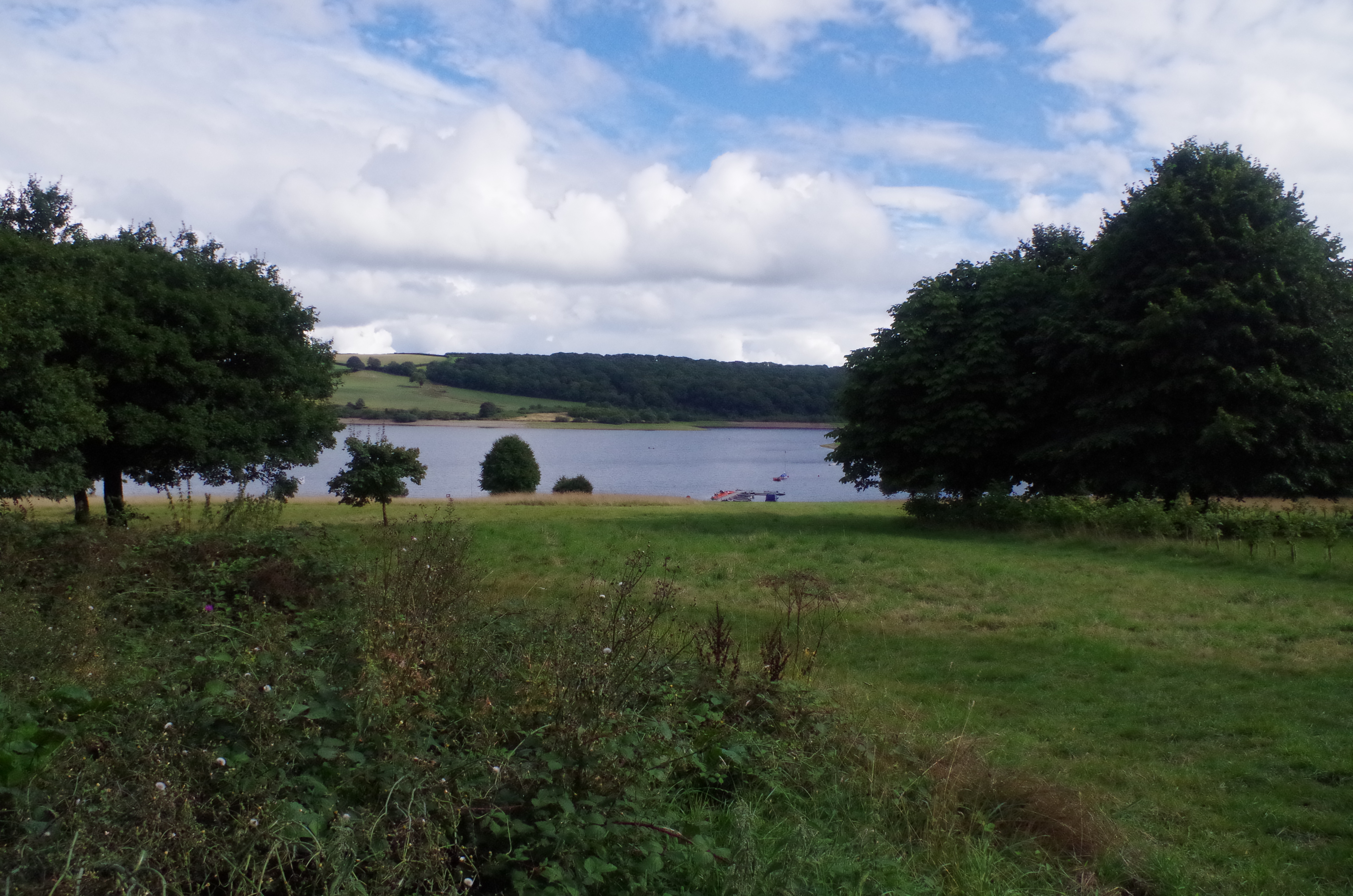 I had been looking forward to Wistlandpound Fly Fishing Clubs Competition at Wimbleball  as I had been hearing good reports of hard fighting rainbows despite the hot summer weather. I was hopeful that the heavy rain prior to the trip would liven up the trout but dipping my hand in the lake it was obvious that the water temperature was still exceptionally warm. We were advised to fish deep and slow using a lure on the point and small imitative patterns on the droppers.

I was sharing a boat with Andre Muxworthy and we headed for the deep water off the dam. After a couple of hours searching the depths we had both failed to connect and realized that it was not going to be an easy day.  Matt Kingdon was fishing with Paul Grisley and we noticed that they were catching a few drifting across the middle of the lake. Andre eventually hooked into a hard fighting rainbow that fought way above its weight before eventually sliding over the waiting net. 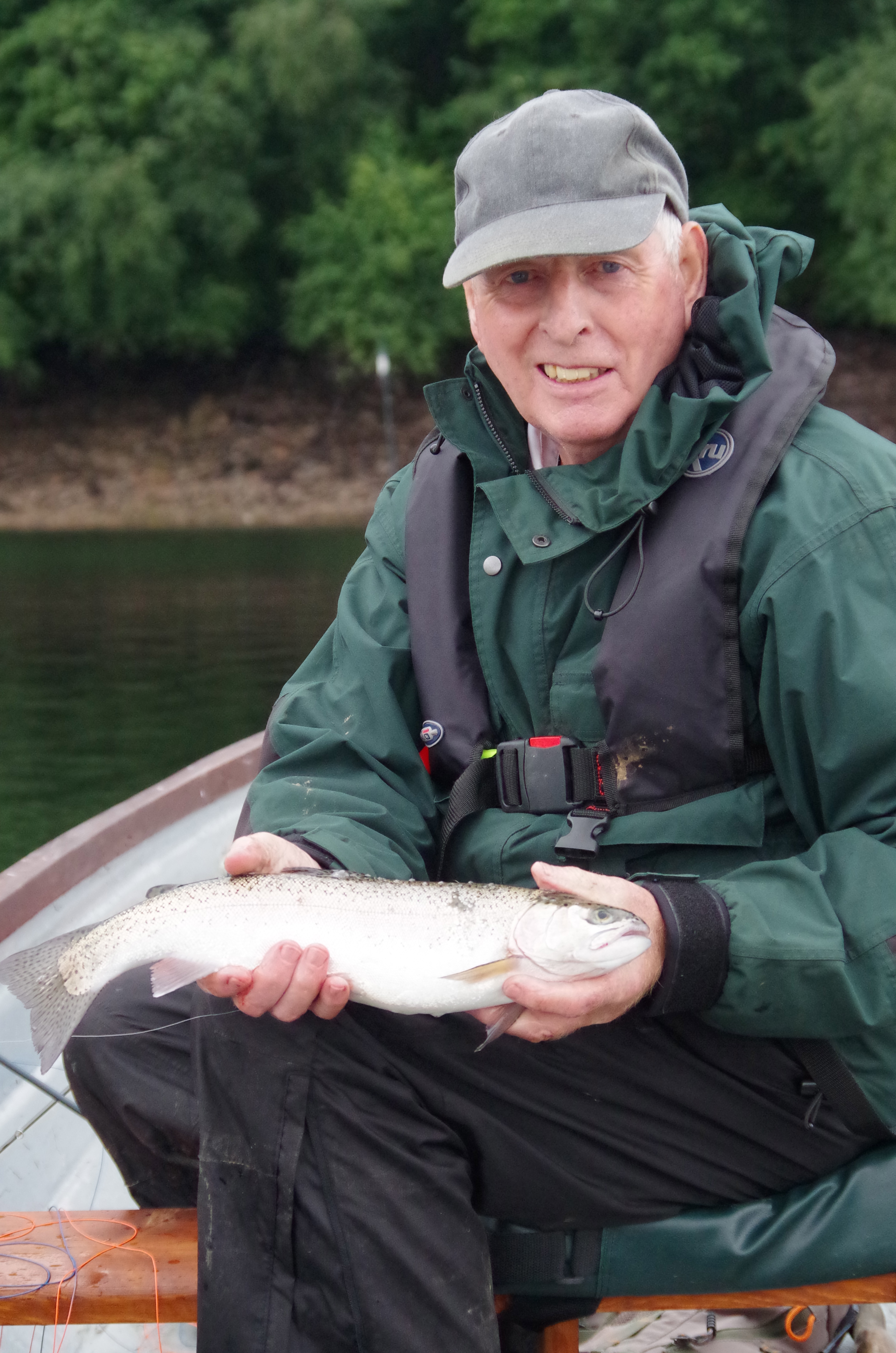 Up until this point I had not even had a pull and was starting to fear a blank trip. A move to another area  eventually brought a change of fortune when I felt the welcome pull on the line and for a few seconds a bent rod. Sadly this one came adrift but it wasn’t too long before I hooked another that battled hard before succumbing. The next hour brought a few encouraging twitches through the line and my confidence climbed. Andre added a second rainbow shortly after this. I was using a black and green booby on the point with two droppers, a Diawl bach and a cormorant. It was now gone 2.00pm and the day was ebbing away far too quickly.

A move close the bank to start a fresh drift brought a solid take from a fish that fought deep before appearing beside the boat to reveal golden flanks and dark spots. A fine wild brown trout of 2lb that had unfortunately engulfed the fly and was bleeding profusely from its gills. Despite my attempts to release it turned belly up and floated away before being retrieved to take home for tea. 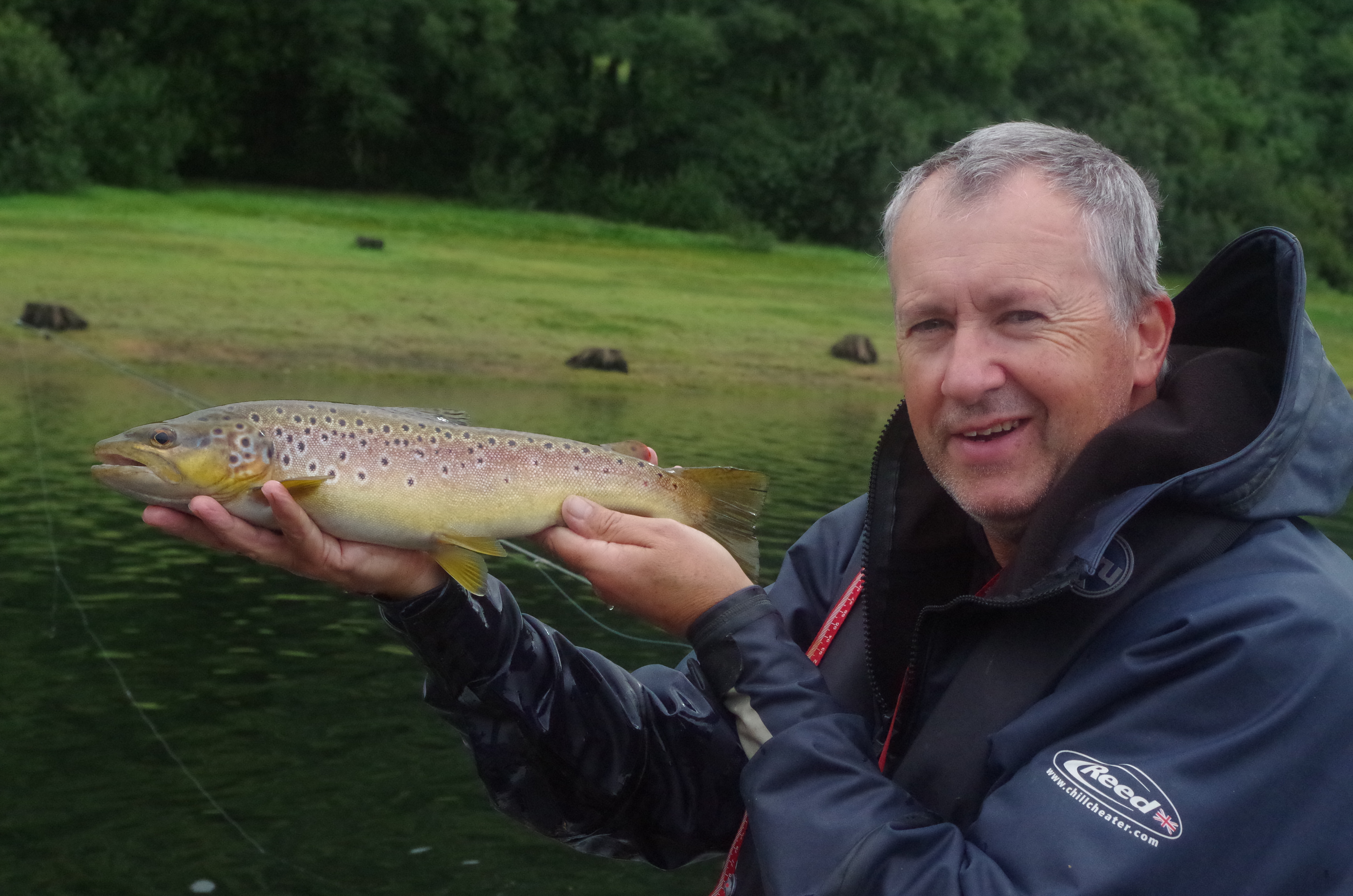 With just a few minutes remaining of the competition a savage take resulted in a full tailed rainbow that made the reel sing as it surged away cartwheeling out of the water. This fish was the heaviest of the day and scaled 3lb 8oz.

Back at the fishing hut for the results and Matt Kingdon once again proved how he has qualified to fish for England and the commonwealth having boated five trout. Matt had elected to fish on a catch and release ticket bringing back just two trout weighing 5lb 7oz. It was decided to award Matt the trophy his estimated total bag being around 12lb. Matt caught his fish on a variety of flies and changed his line three times during the day as the fish moved up and down in the water. Runner up was Dave Mock who fished from the bank to take three trout for 6lb 1oz. In third was myself with two for 5lb 9oz a bag that included the biggest trout of the day at 3lb 8oz.

August is a very difficult month for the still-water trout fishers and today’s result was far better than could be expected on many lakes at this time of year. As the water temperatures begin to drop I am sure Wimbleball will fish exceptionally  well with September fishing something to look forward to as these full finned rainbows go on a feeding frenzy before autumn and winter set in. There is also every chance of big wild brown trout from the fry filled margins.