Many thanks to Exmoor Fly Fishing for letting me reproduce their report on the charity event at Exe Valley. 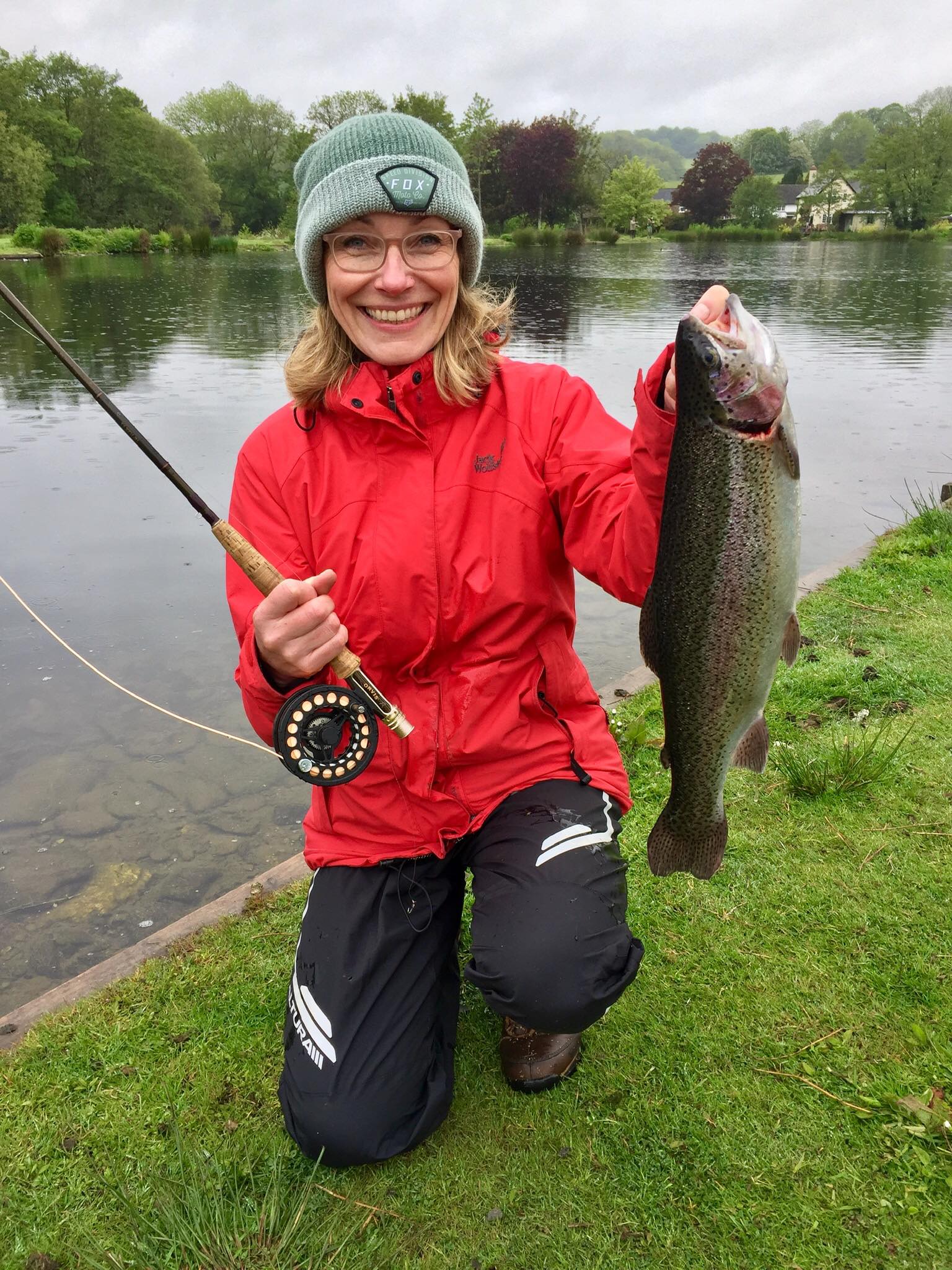 Fishing for FORCE the Cancer charity day organised by John Dawson was held at the superb Exe Valley Fishery by kind permission of Sue & Nick Hart.
The day started overcast and dimpsey in other words Exmoor weather! Jackie joined me to learn how to fly fish in no time she was throwing nice loops so it was on to the lake …no pulling lures here it was small flies from the word go . She was soon into her first fish of the day a quick burger and coffee then I took Rory under my wing it wasn’t long before I heard the shout “ I’ve got one I’ve got one” an epic battle ensued before a fin perfect Exe Valley rocket was drawn over the net….several more soon followed, the fishery is fishing really well and the Trout are up in the water and will readily take a dry.
Thanks must go to John Dawson, Sue Hart and the ladies from Force for putting the day on and raising lots of money for the charity. 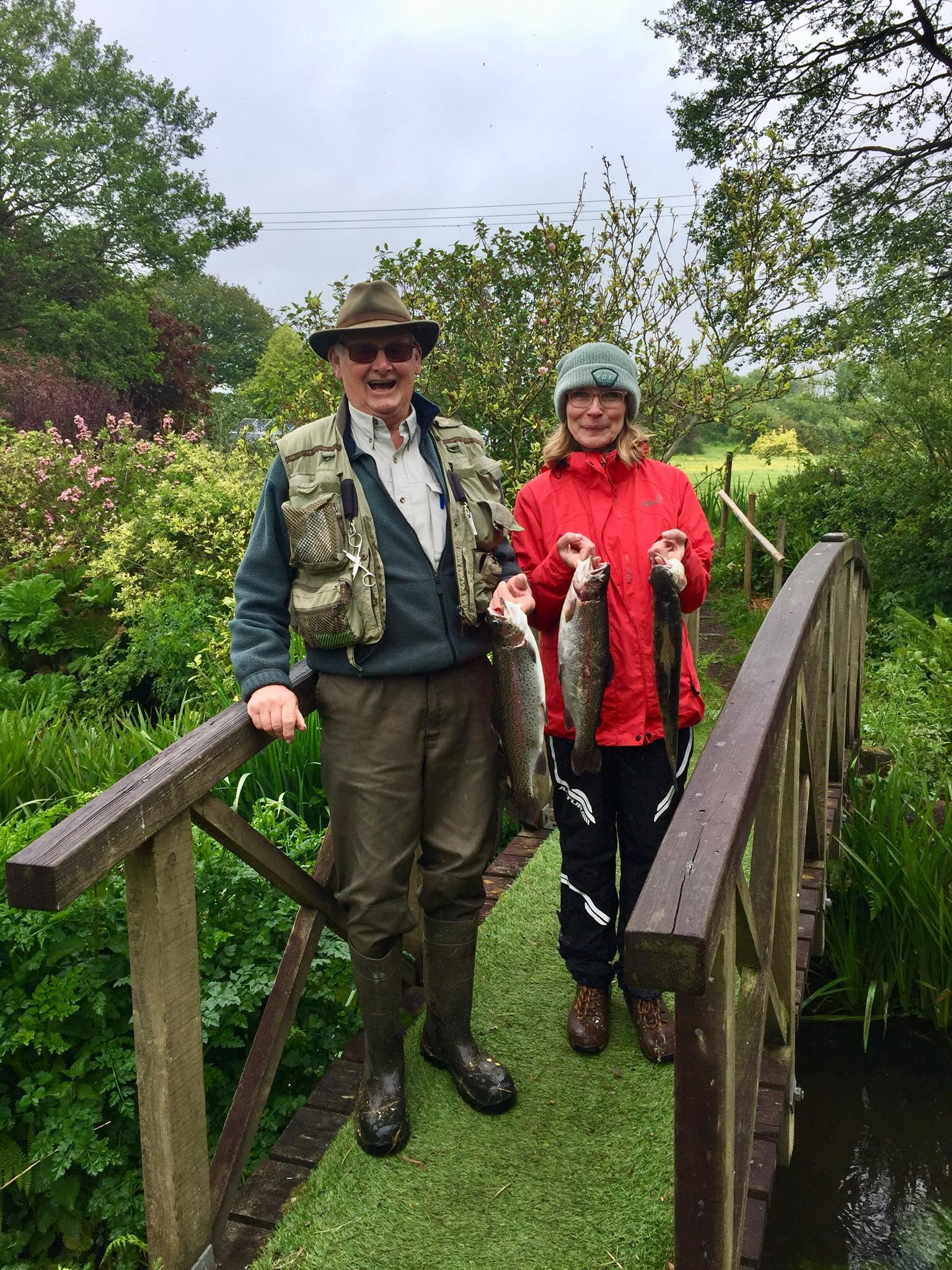 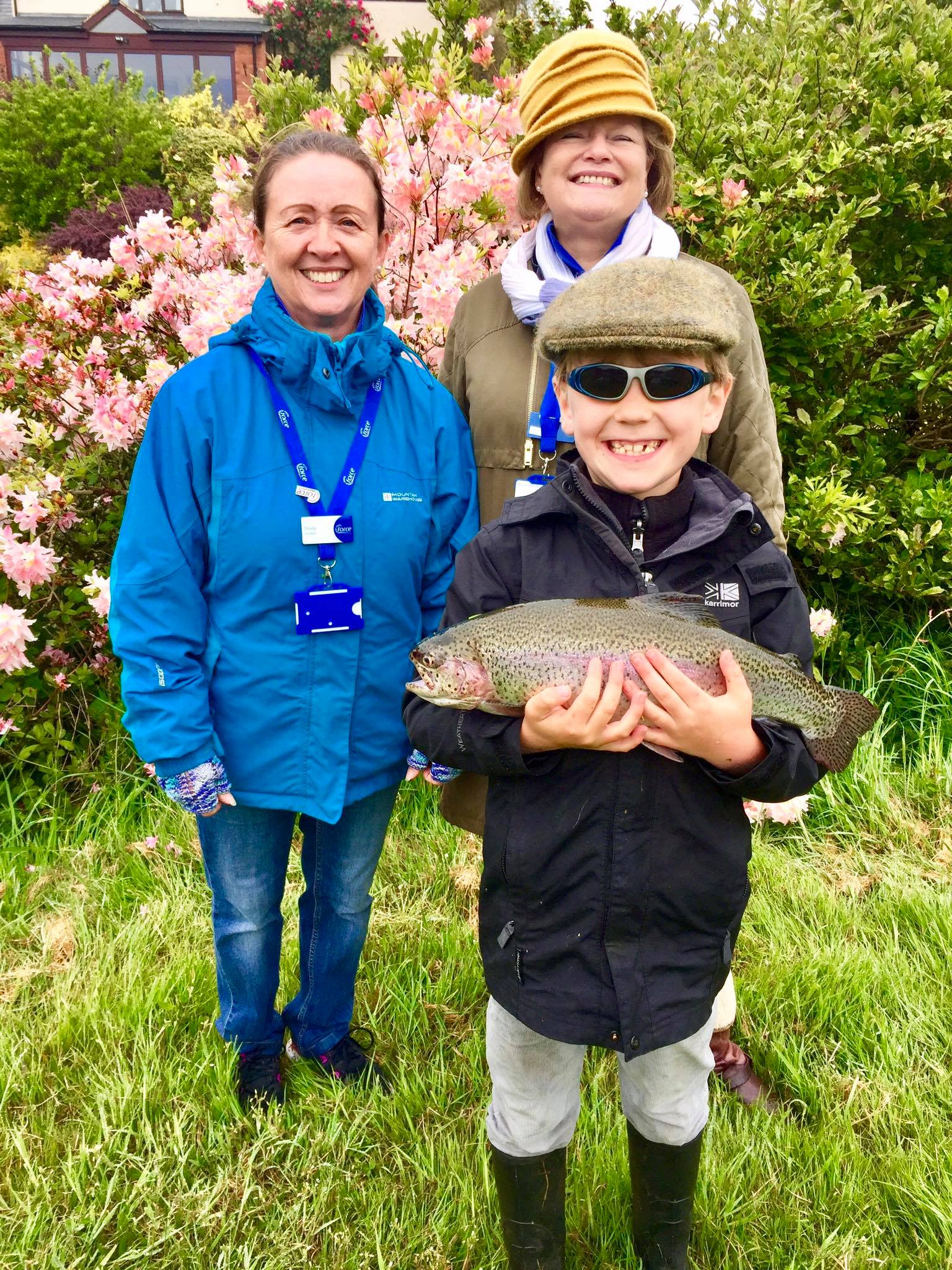 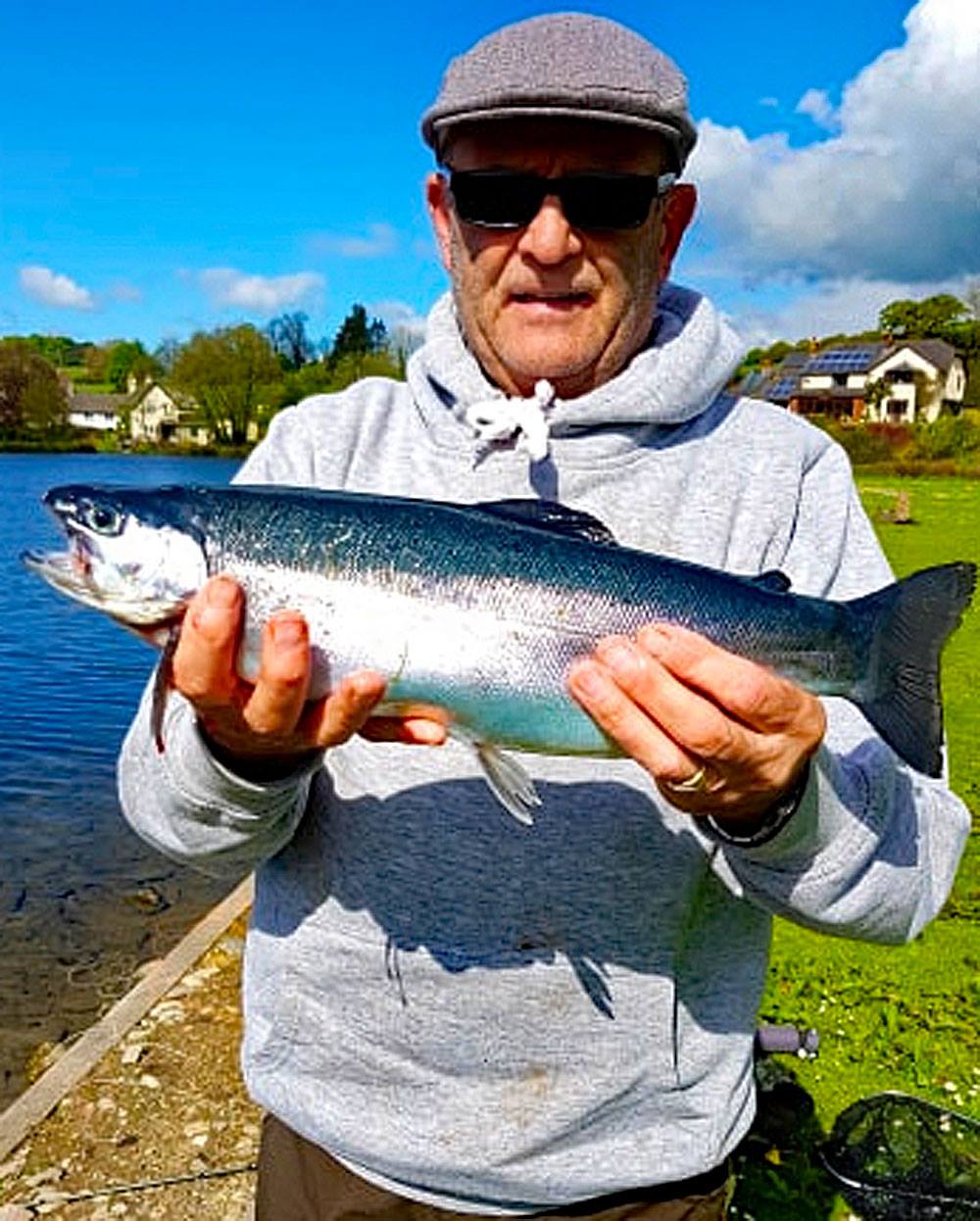 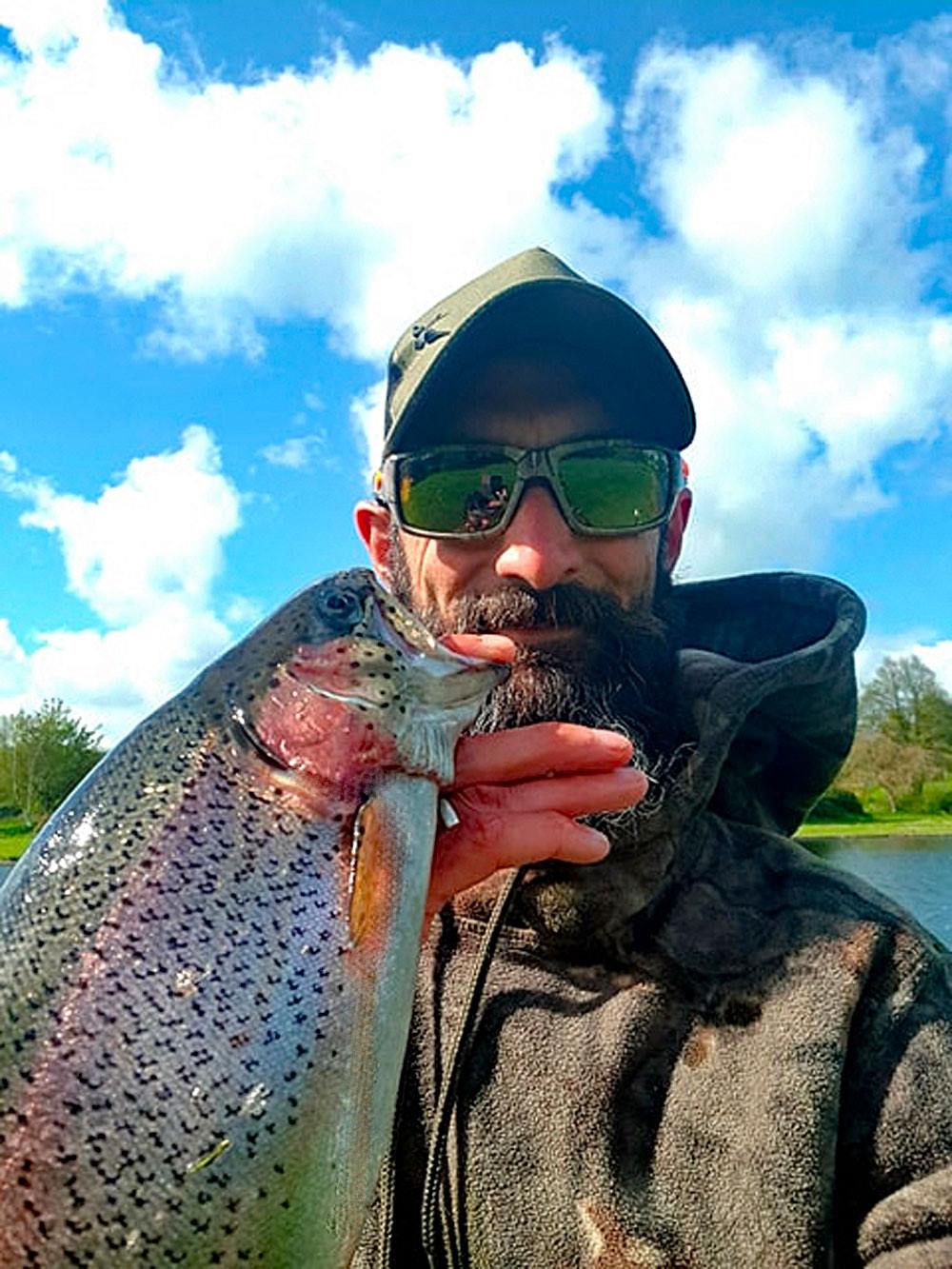 It is vital that young anglers come into this wonderful pastime of ours and engage with nature. At Exe Valley Fishery they are catering for those first timers with a lake dedicated to young family fishing adventures. Chris Guest sent me this news story following on from young Haydo’s adventure. 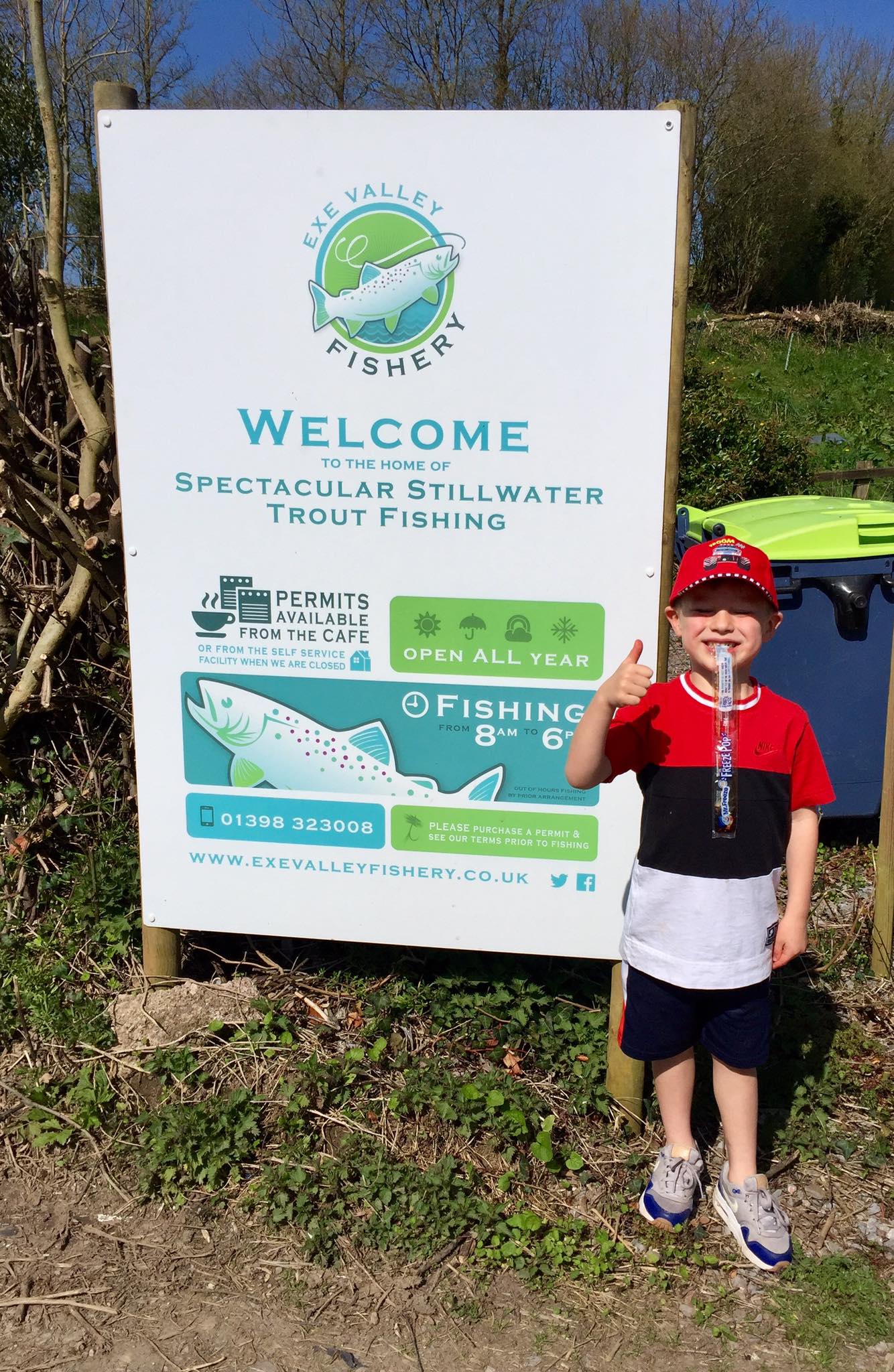 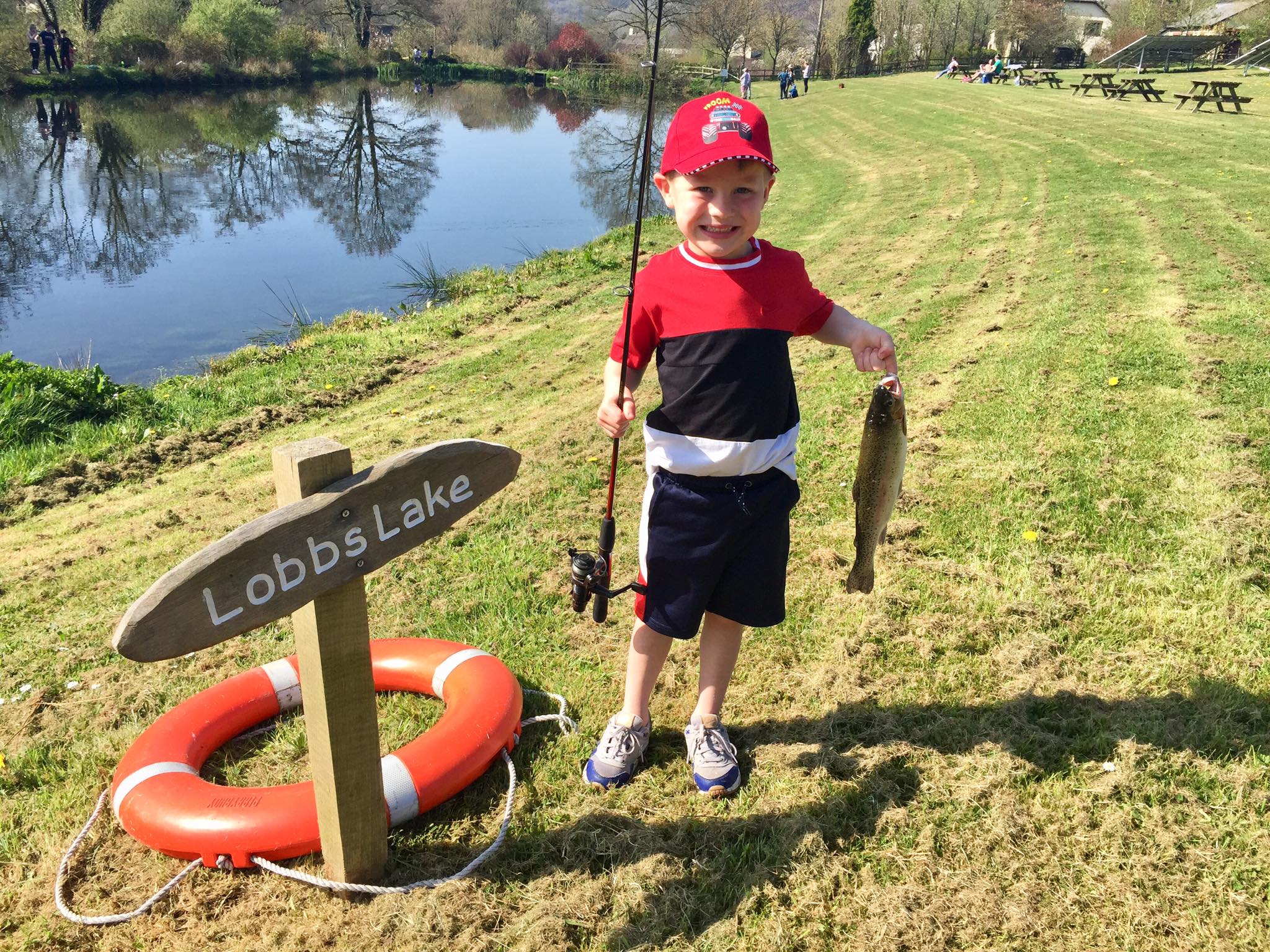 “Fun in the Easter Sun, Haydo & grandpa went fishing and Haydo caught his first trout on Lobbs Lake at Exe Valley Fishery, a brilliant place to take kids for their first fishing adventure, this lake is bait or spinner, we float fished with some soft pellets and it wasn’t long before he had his string pulled, a couple of fish later he was enjoying a well deserved Cola Ice Pop from the fishery freezer, check it out!!!” 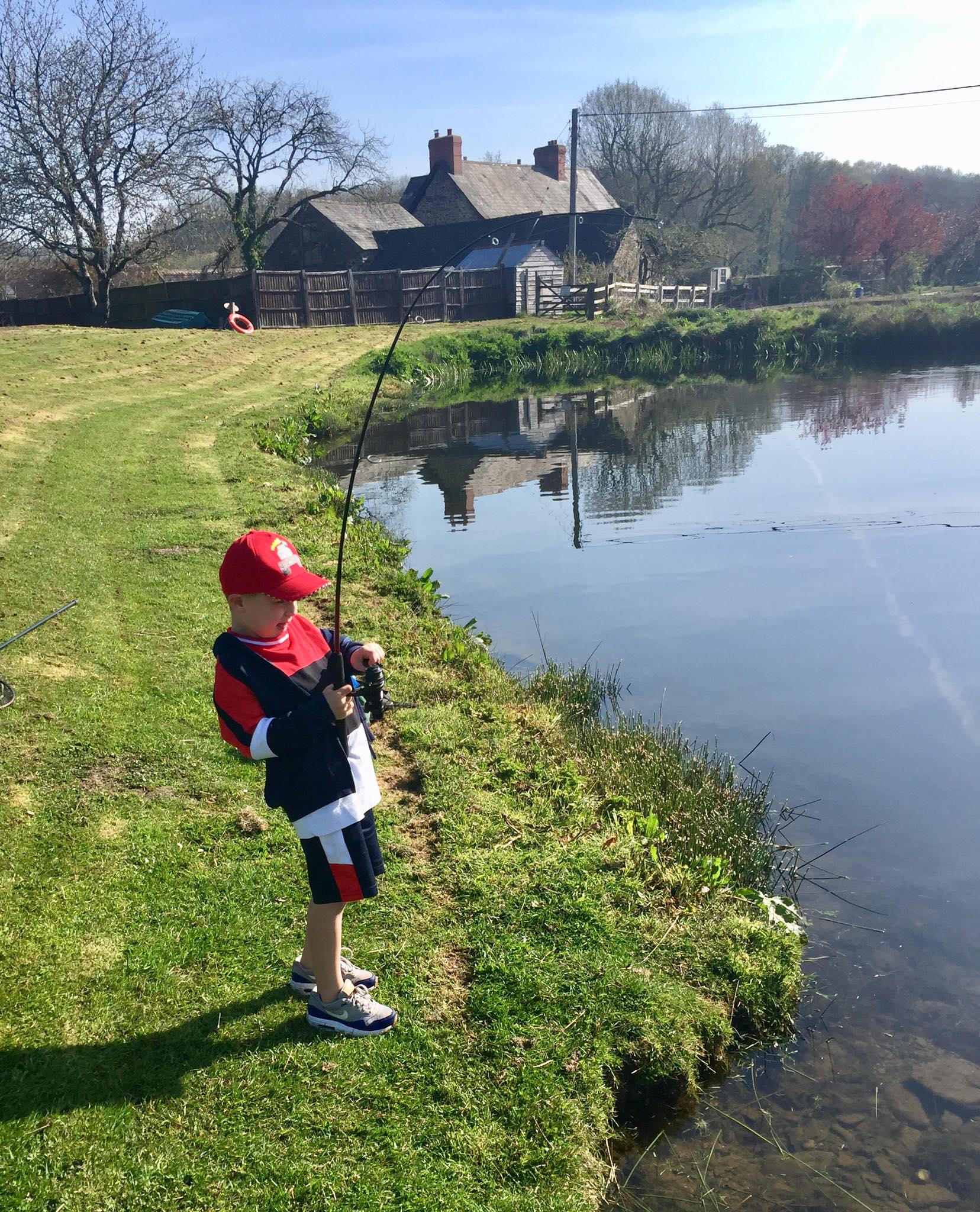 There is of course the main fishing lake for the dedicated Fly Fisher with trout to double figures!

The weather forecast gave the rain clearing away by mid morning but on this occasion this proved a little premature as heavy rain persisted for the first couple of hours with the Anchor Lake overflowing into an already swollen River Exe. The wind had however abated from the gale force winds of the previous two days that had been courtesy of storm Callum. 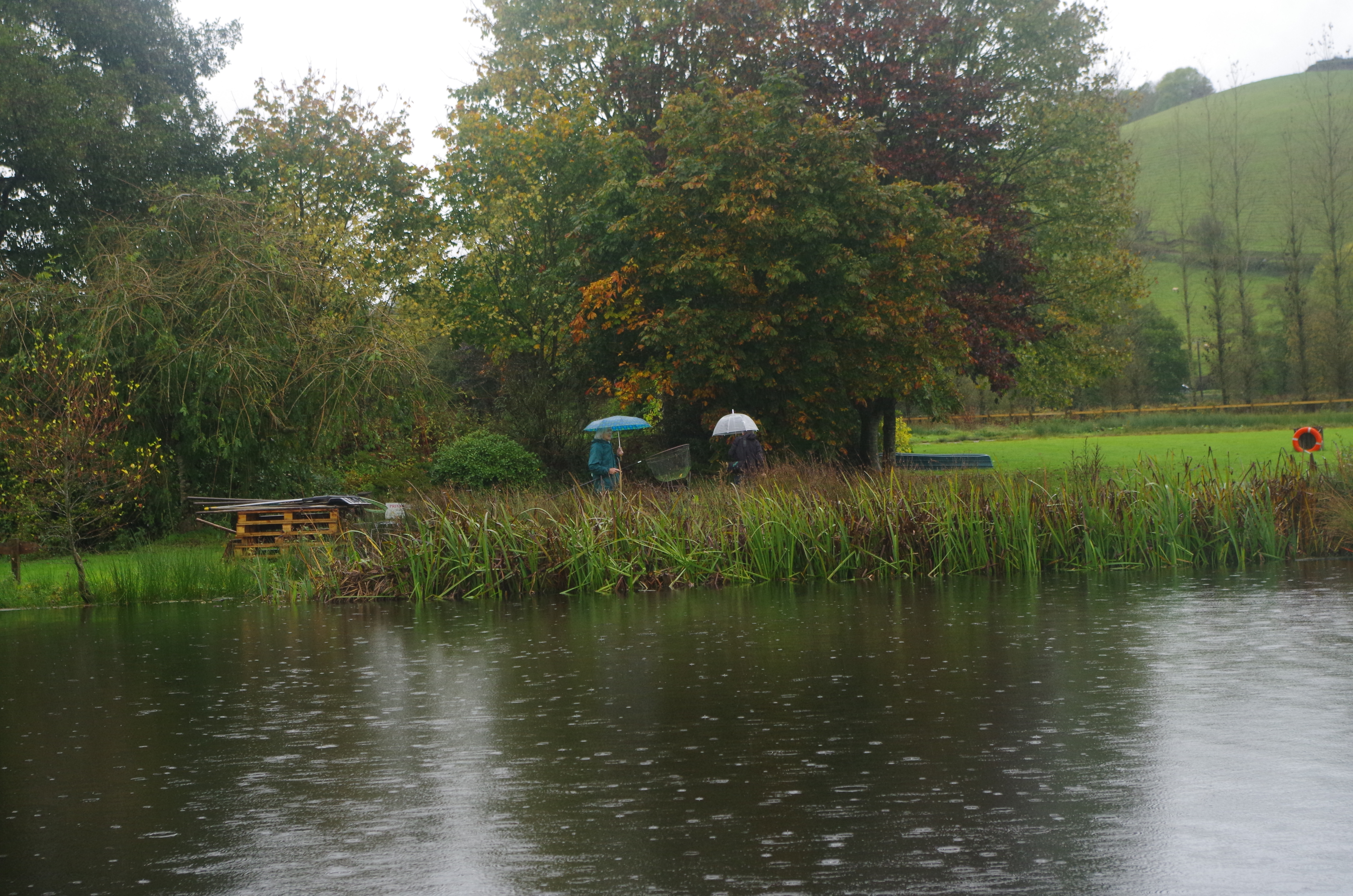 It was relatively mild and trout were rising from the start of the days competition. I started off with a damsel nymph and hooked into a hard fighting rainbow of around 3lb within ten minutes of starting. 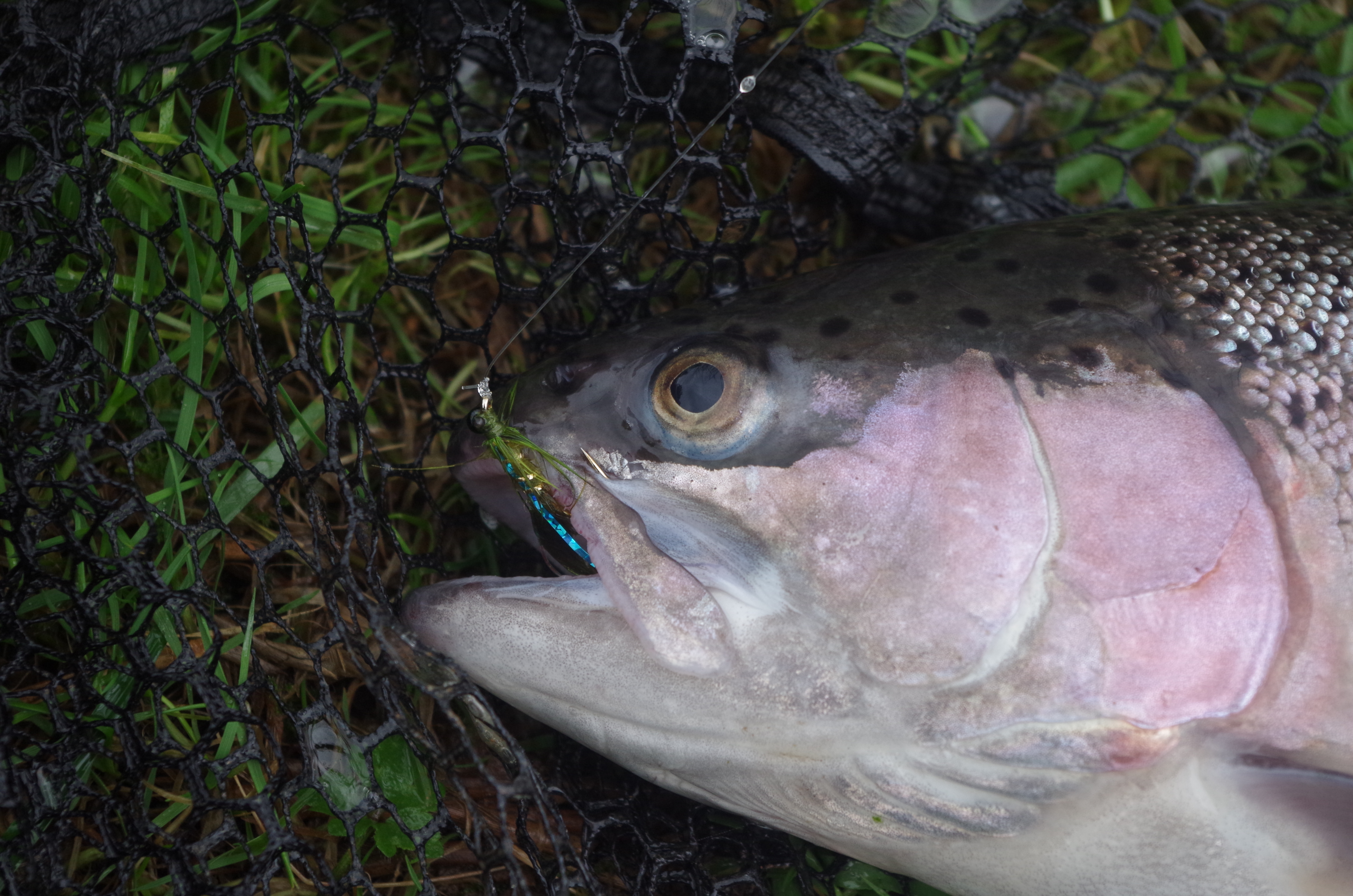 A few more follows and takes followed but as is often the case the trout seemed to grow warier as anglers lines splashed upon the water. Noticing several trout rising a couple of yards along the bank I relocated; tied on a daddy longs imitation and fished it very slowly to quickly complete my three fish limit of fish to kill and take. Other members were also catching trout on a regular basis with small imitative patterns outscoring lures. 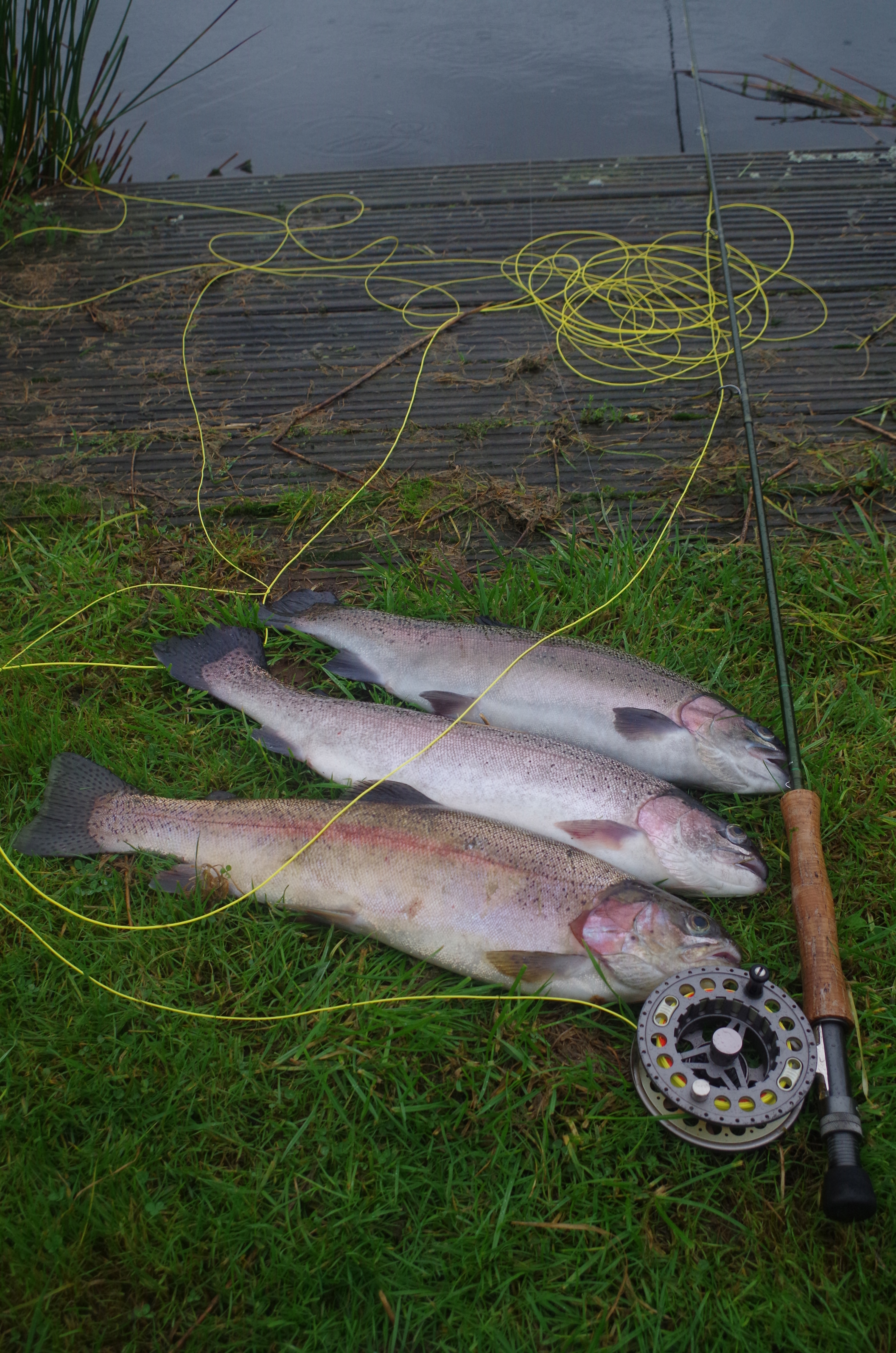 It was now time to snip off the barbed hooks and go catch and release for the remainder of the day. This proved both fascinating and frustrating for me as I successfully hooked a succession of trout on buzzers and diawl bachs all of them coming detached before reaching the net. This wasn’t really an issue as the most exciting part is hooking the fish and all appeared to be fish between 2lb and 4lb and whilst it is good to get them to the net its not important as it the successful deception that matters in this instance.

By mid afternoon all members had completed their three fish bags and gone on the enjoy some catch and release action. 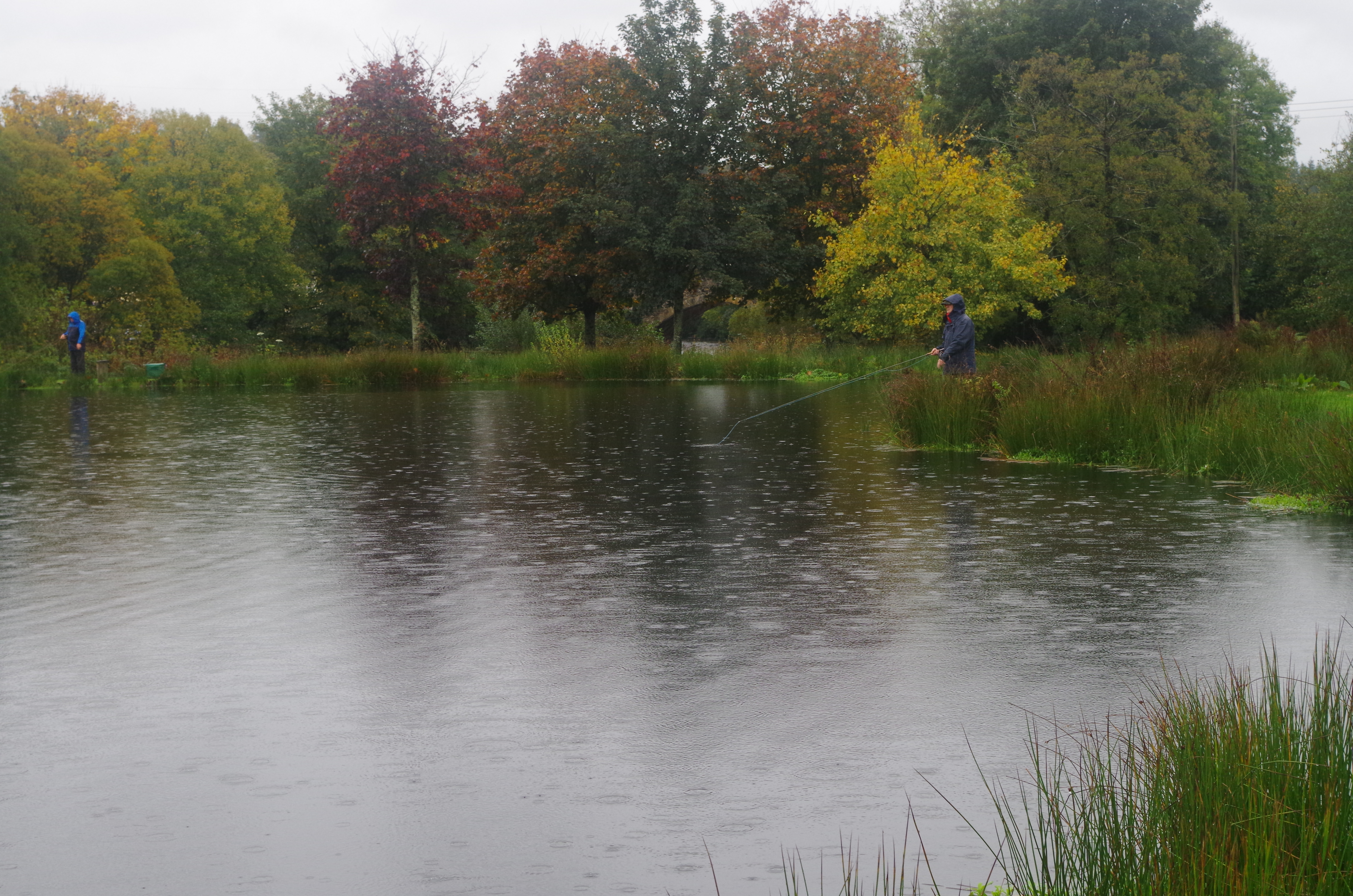 The competition was won by Dave Mock who weighed in three trout for total of 9lb 14oz. Runner up was Colin Combe with three for 9lb and third myself with three for 8lb 14oz.

The trout averaged 3lb for the day with all members taking their allocated quota. The innovative pricing structure combining various options of catch and release and catch and kill gives excellent value depending upon individual preference.  The lake is can now be fished without hindrance from weed and the water remained clear despite the flooded river Exe racing past full of turbidity and flotsam.

In this months Trout Fisherman mag (issue 490) John Gilmore took top spot in the Sept/Oct round of Troutmasters at Exe Valley with a fish of 10lb 6oz In second place was Dave Bull with an 8lb 14oz Rainbow while Keith Ratcliffe managed third with a fish of 6lb 10oz Well done to all the badge winners. 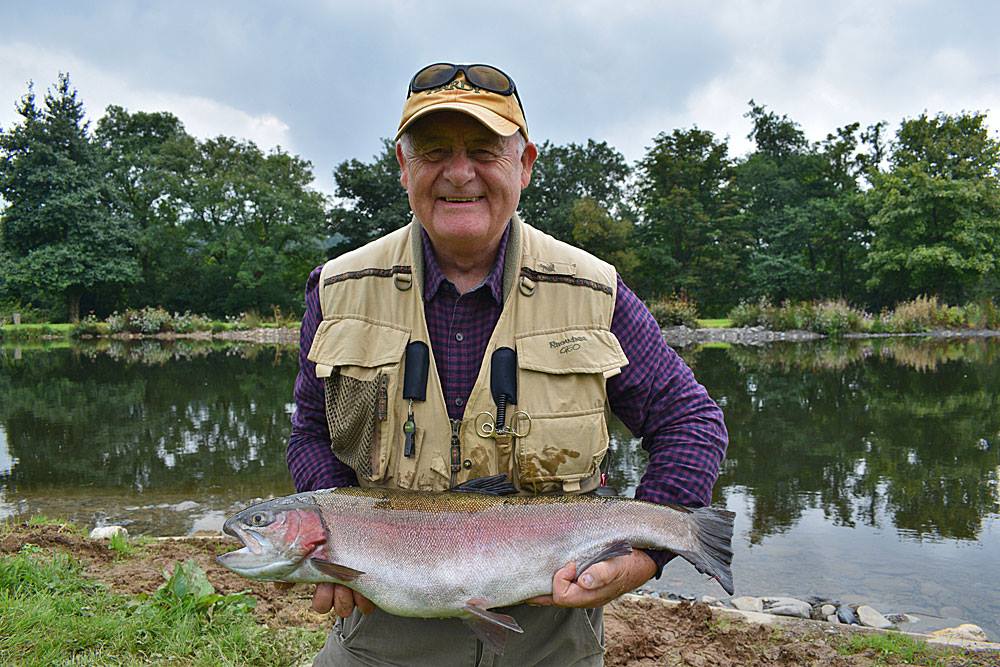 Nick Hart reports from just over the border at Exe Valley Trout Fishery.

Showing the adults the way is up and coming junior angler Seth Mayhew-Tuson, age 16, who has just won our heat of the Greys Junior Bank National supported by the Angling Trust.  Seth has picked up many tips having become part of the England Youth Fly Fishing squad, using this knowledge to great effect to secure top spot with 3 fish weighing exactly 10lb. 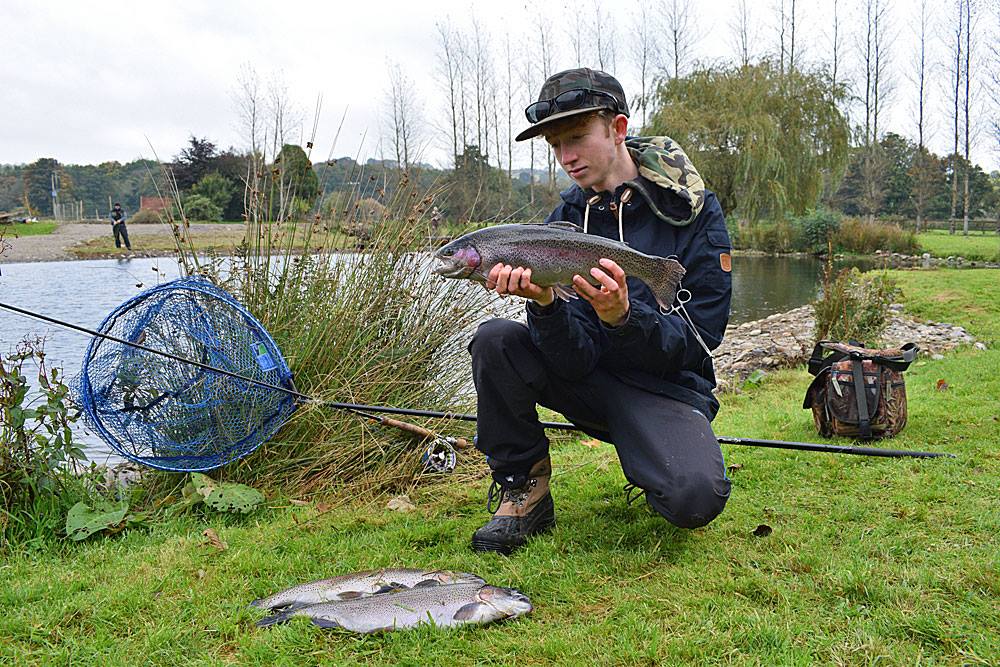 The fish were caught within 2 hours so Seth also gained himself an extra 2lb 8oz time bonus to finish well ahead of the field.  His successful tactics included an intermediate line and mixed up retrieve (mainly slow figure eight) with a combination of Blobs and Nymphs fished around the deep water inlet.

In second spot was last year’s third placed angler, Toby Bennett, with two fish weighing 5lb 14oz.  He caught these quickly, also in the deep water inlet using a floating line but couldn’t add to his bag before the match finished at 1pm.  Toby is studying fisheries management at college and is an incredible caster winning a major tournament earlier this year with a cast of 32 metres!

Meanwhile the youngest angler, Charlie Cooper, couldn’t get the fish to stick and lost 3 before finally netting a 2lb 14oz Trout to collect third prize of a fly line and line snips.  This was a fantastic effort and the ten year old will now progress on to the 2017 final to be held next April.  Charlie used an intermediate line to catch his fish and it was great to see Seth helping out the younger anglers after he had completed his limit.  This is what competition fly fishing is all about, sharing, learning and meeting new people. 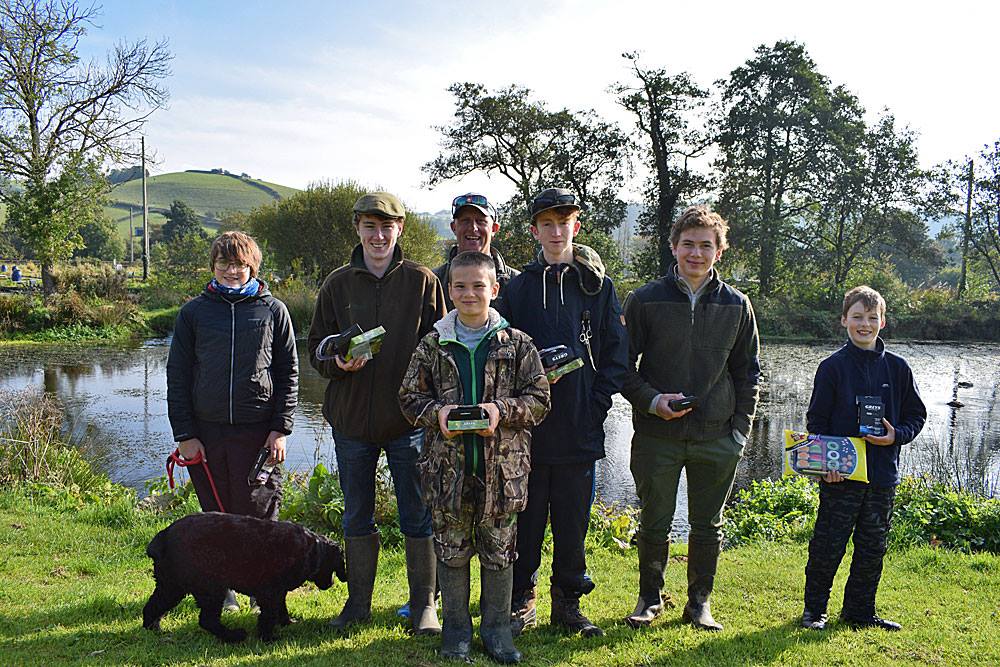 (Above)All the boys received something from Greys fly fishing and we threw in a few prizes. These are the fly anglers of tomorrow and need as much encouragement as possible.