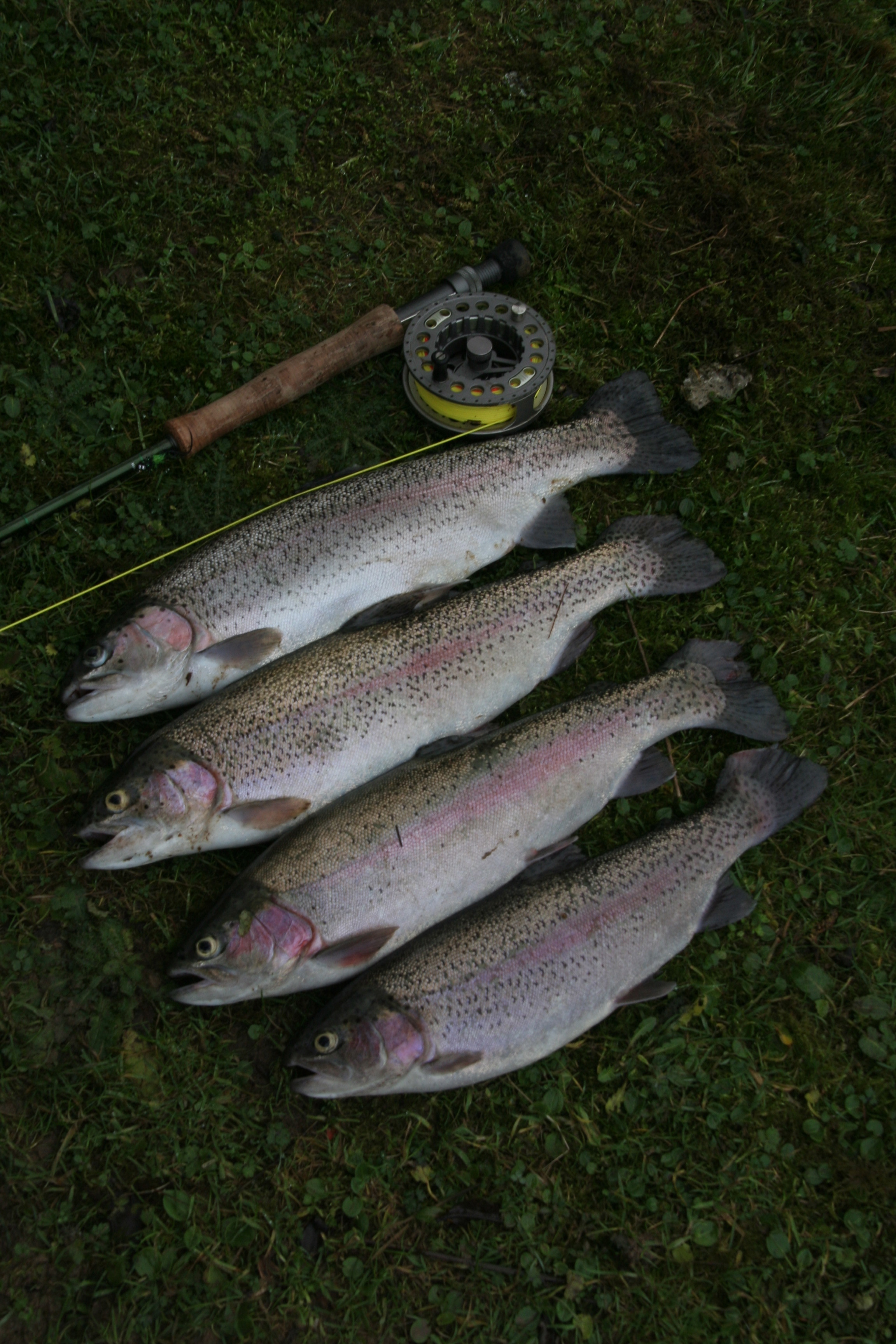 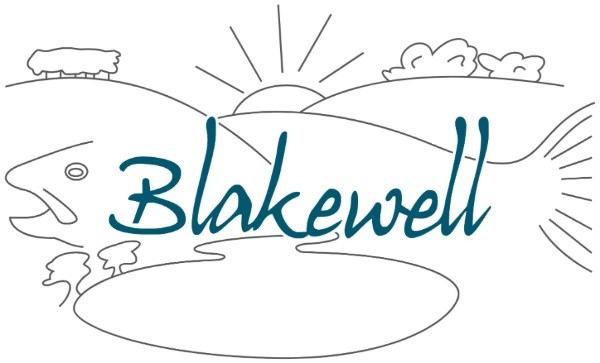 Bratton Water’s stature as a first class brown trout water is growing with some stunning fish being tempted. Chay Boggis visited the fishery and had a fine bag of trout to just over five pounds. Successful tactics were a white dog nobbler fished close to the surface with a fast erratic retrieve. Nick Hart and top angling photographer Henry Gilbey paid a recent visit to the fishery and their work should appear in a top trout fishing publication this spring!

The latest from Nick Hart at Exe Valley. These cold calm winter days are great for the winter fly fisher!

Always good to see new faces on the lake and today Andrew, John, Simon & Roger took the trip from Cheddar on a cold January morning. I got the boat out for a bit of ice breaking and the guys nailed some fish. Rogers were camera shy but the 4 of them landed 19 fish with John taking the best bag of 5 at 19lb 8oz with Andrew on 5 for 17lb. All sorts of tactics used including lures and nymphs with sink tips & floaters. Thanks for visiting guys and hope to see you again. 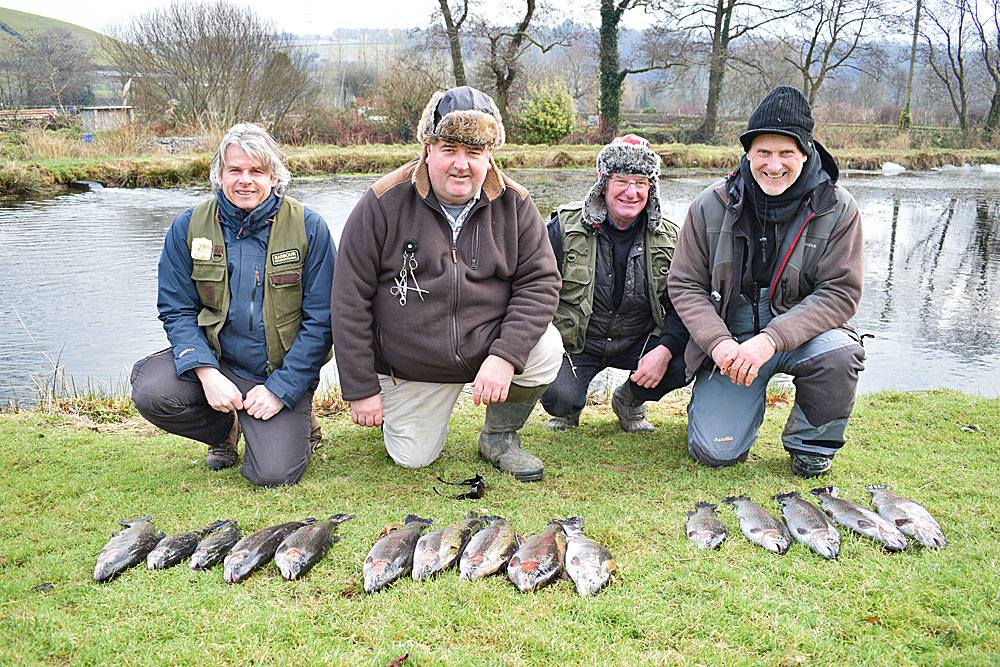 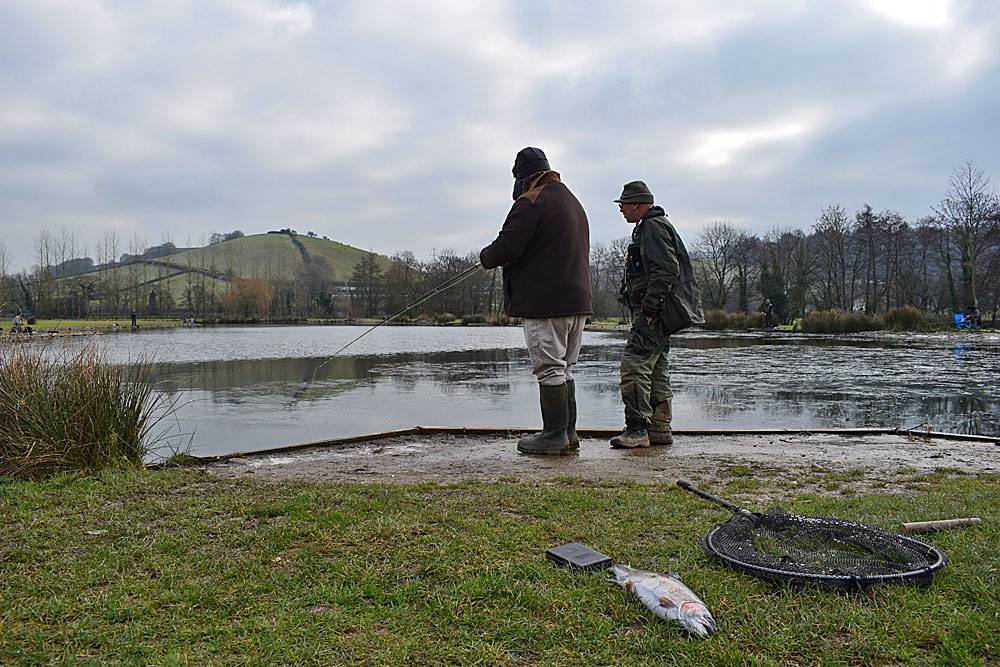 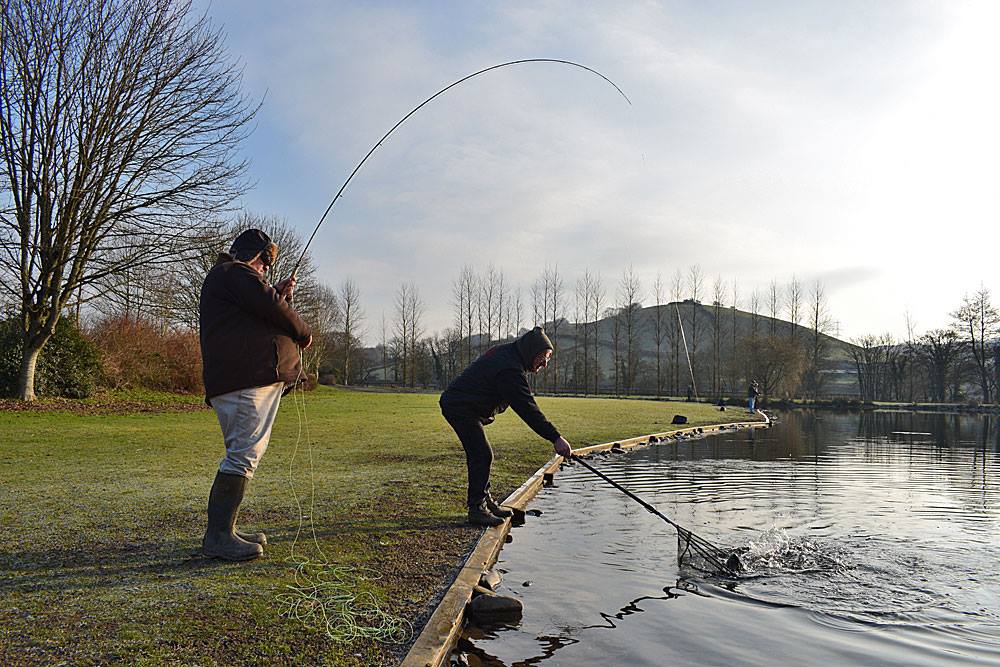 Colin Oram bagged himself a stunning spade tailed 14lb 8oz Rainbow trout from Exe Valley Fishery caught using an Olive Classic FM on 7lb leader . The fish gave a spirited 15 minute scrap; no surprise with a tail like that!! 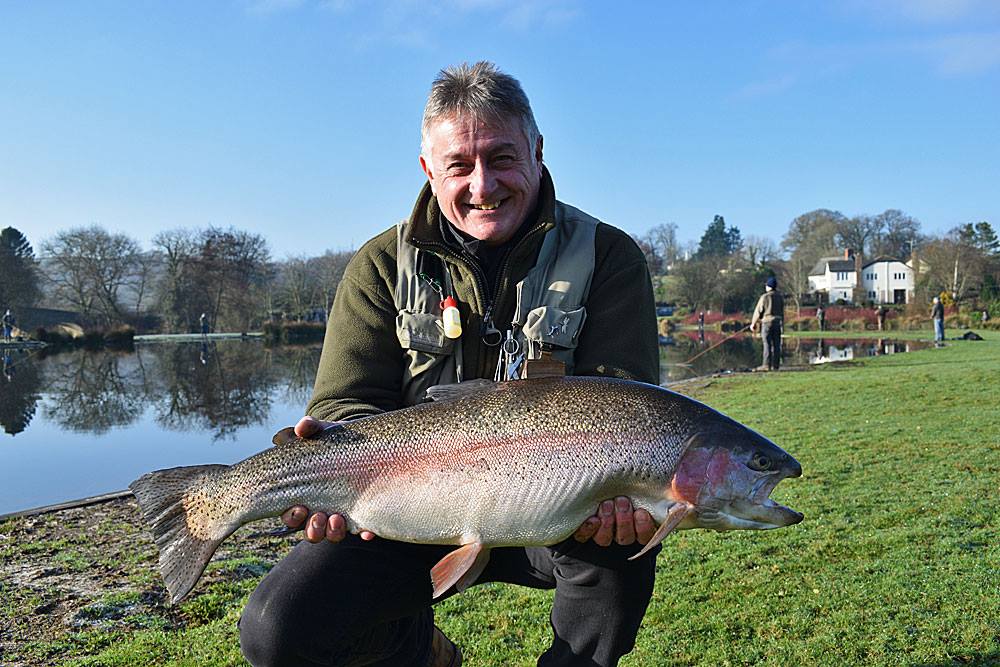 Blakewell Fisheries  first competition for the year will be Sunday the 29th January 2017. This is sure to be a popular event with every chance of a big double figure rainbow like the ones pictured below caught during the Christmas Competition.

To secure your place email Blakewell on [email protected] 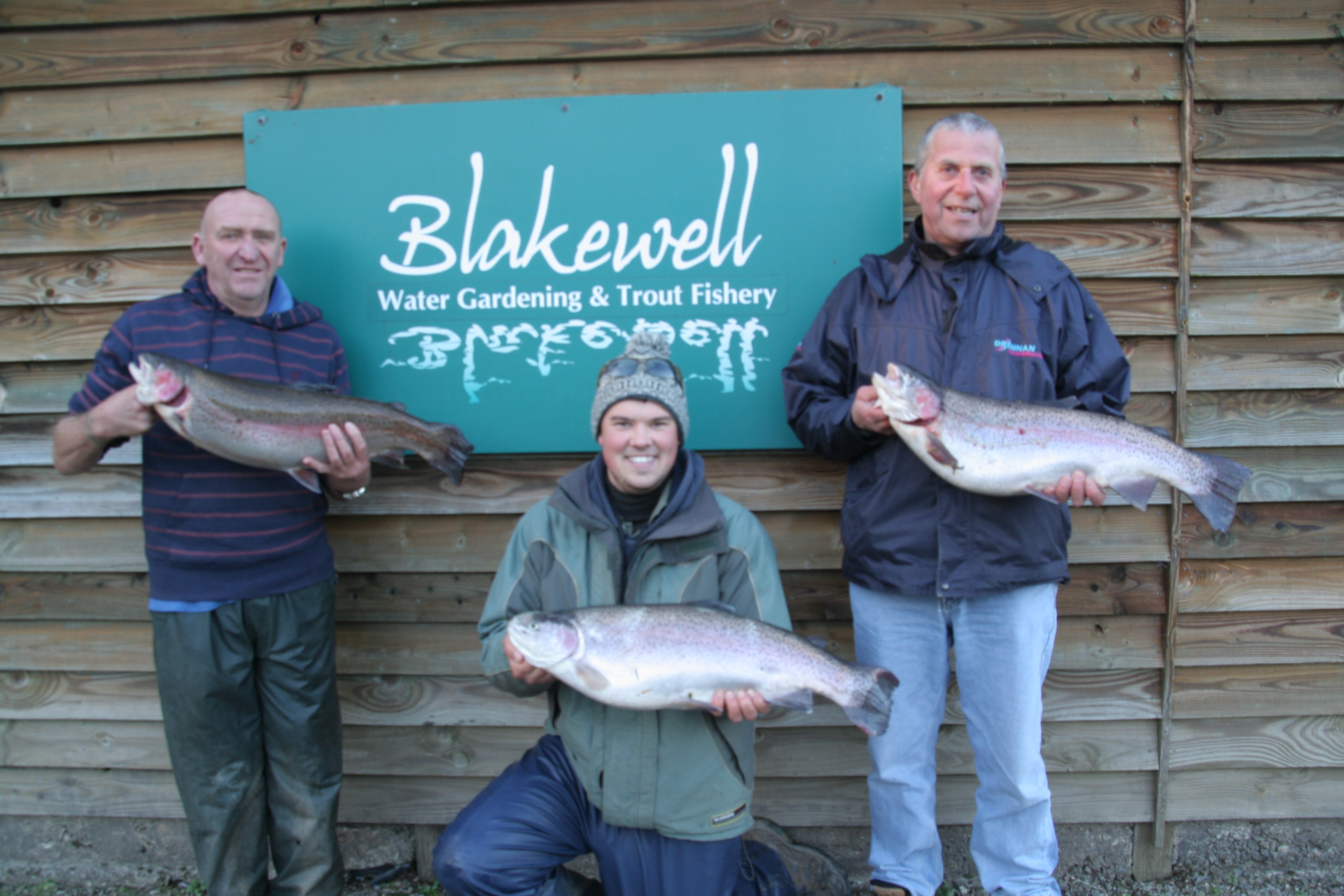 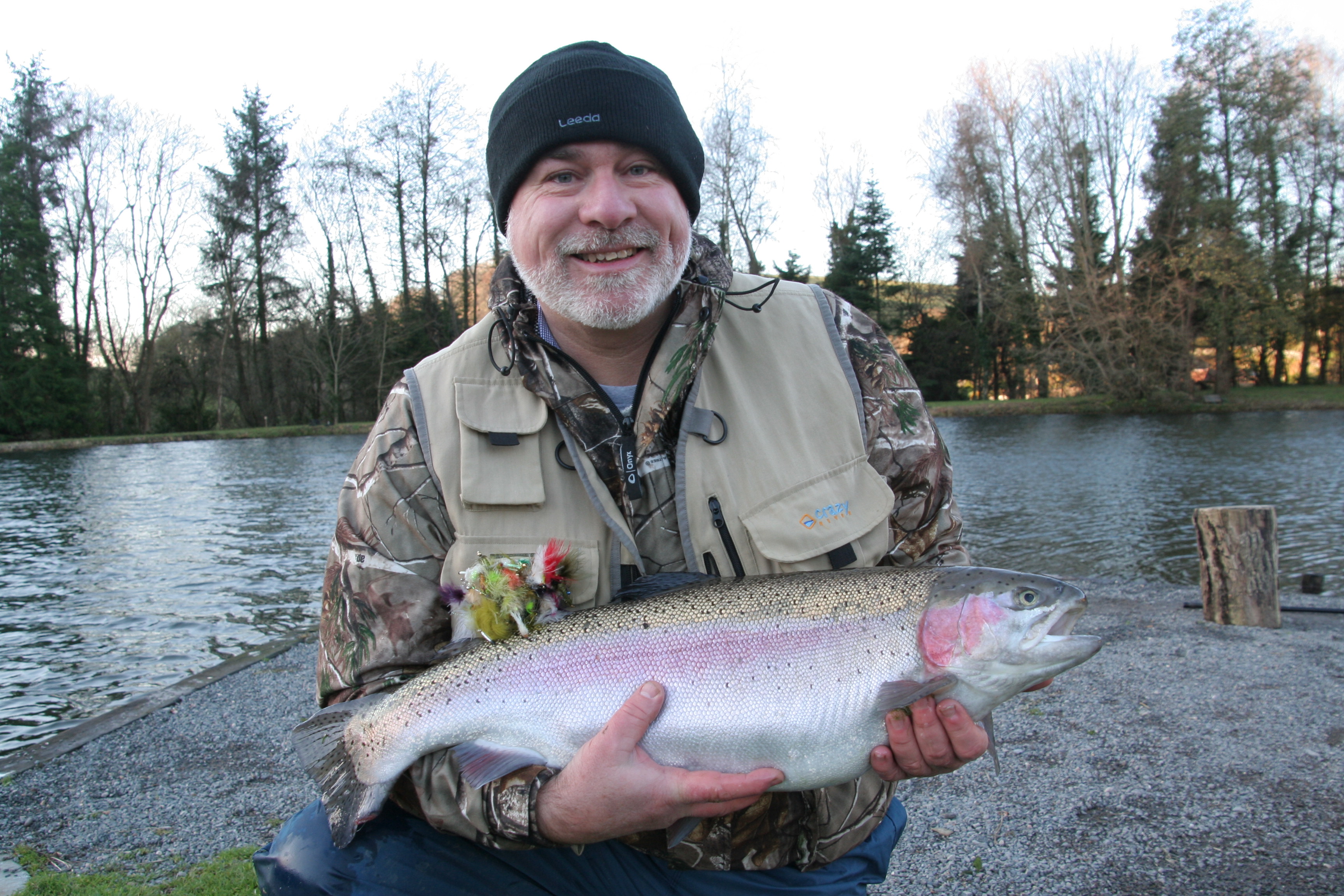 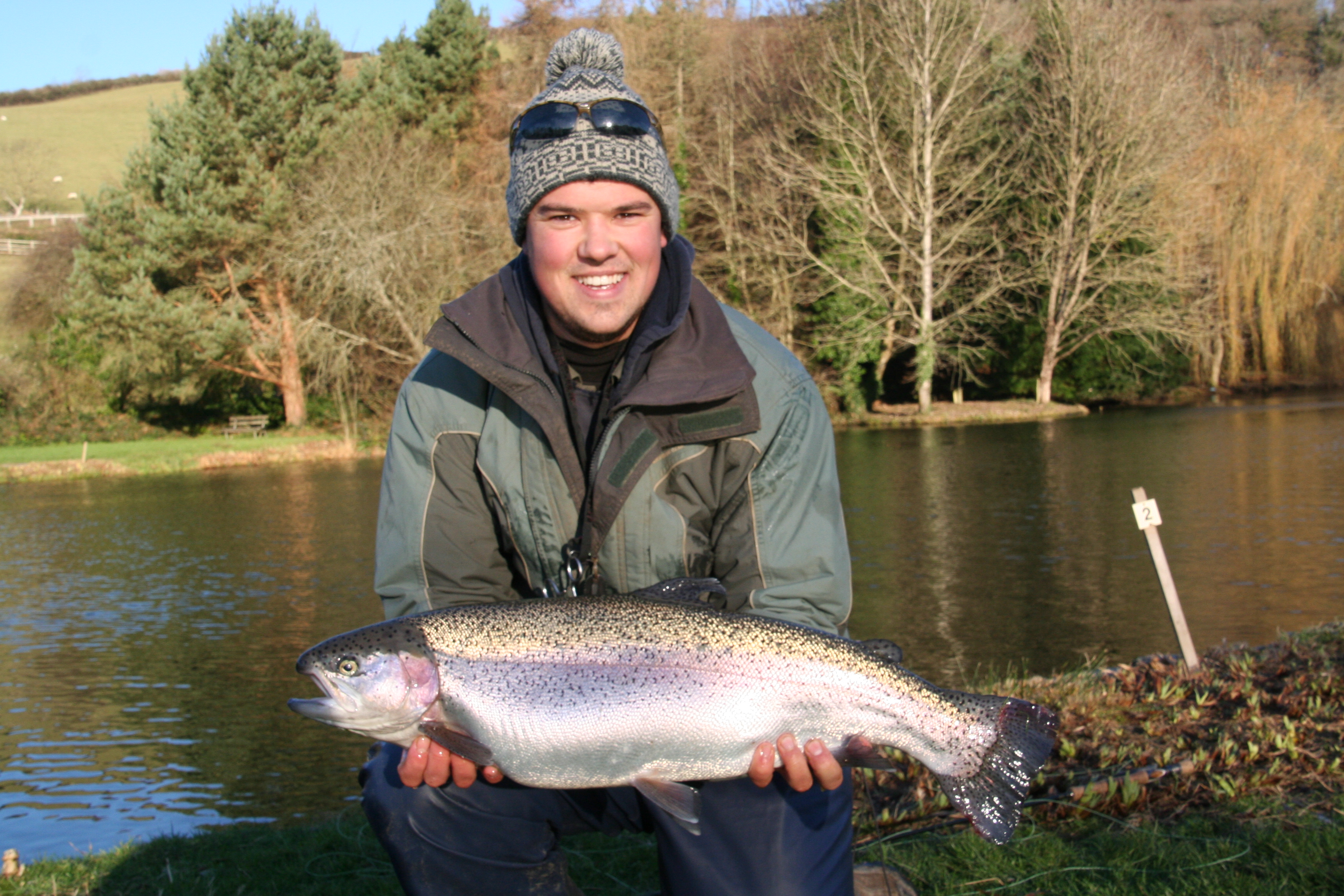 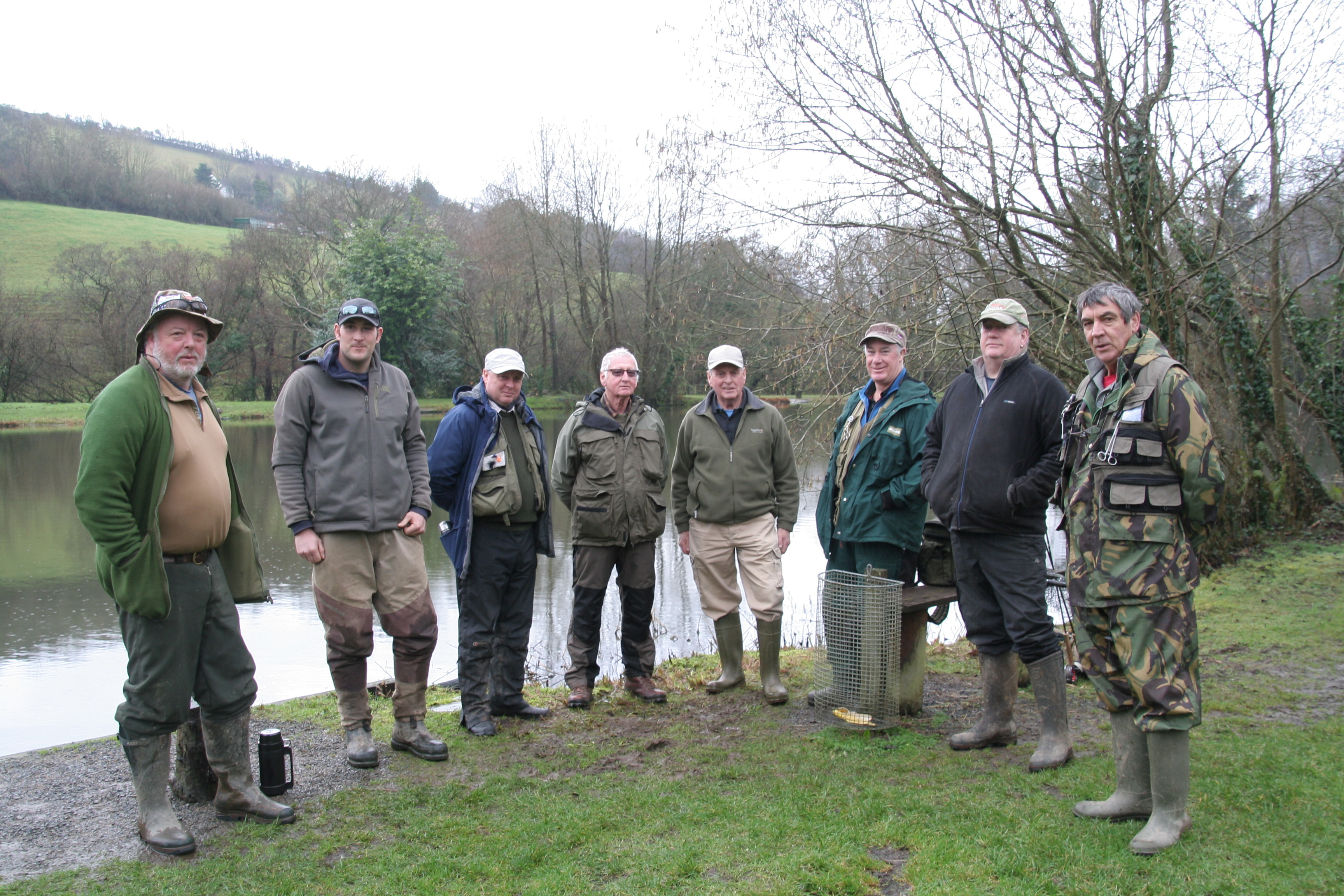 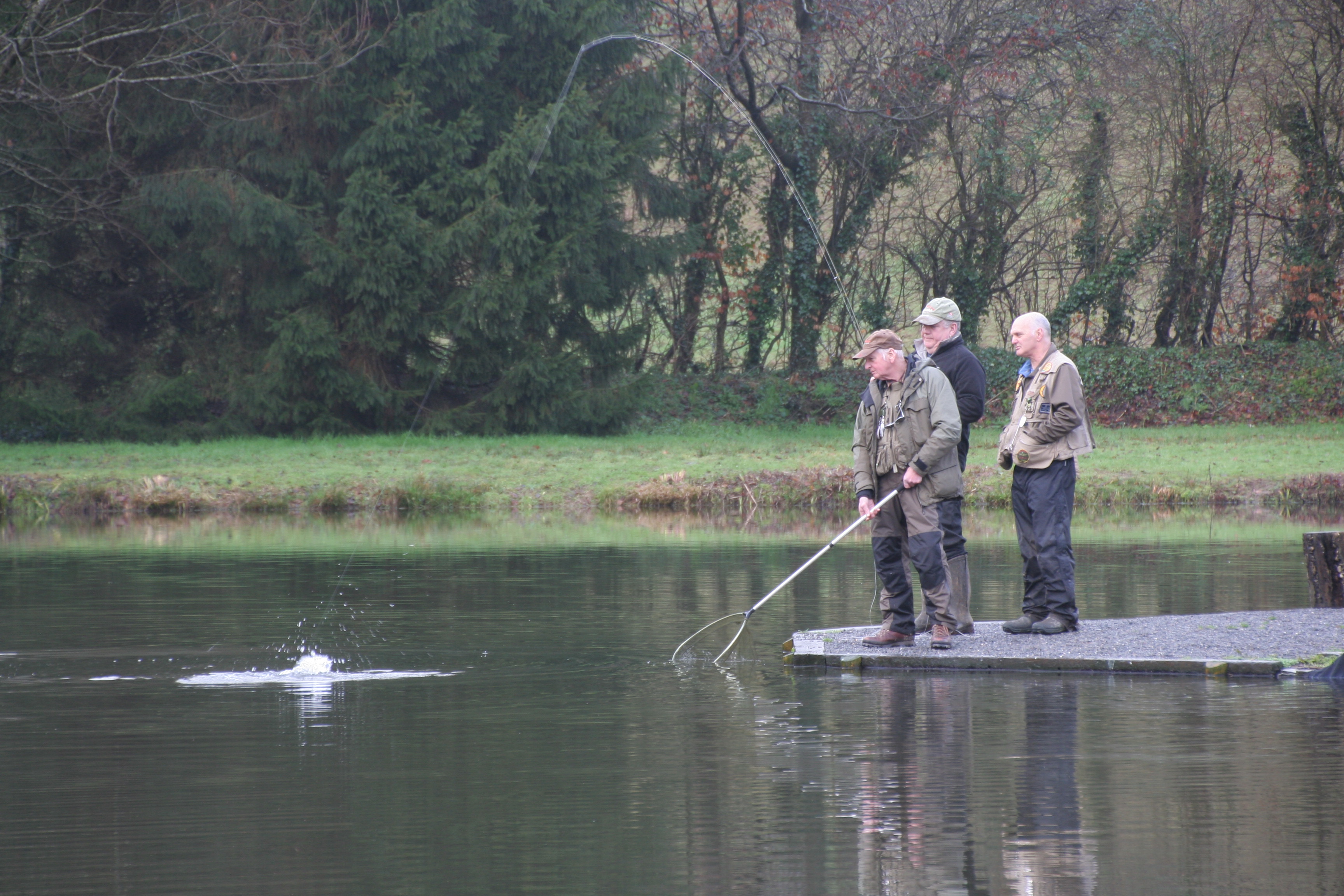 Whilst it is still winter and we may get an icy blast or two before the spring arrives it was hard to believe that spring was not starting to arrive as we walked to the water. Green shoots of blackthorn on the hedge and daffodils emerging from the soil. The sound of a song thrush drifted through the mild air. I chatted with fishery owner Richard Nickel about the forthcoming salmon and sea trout season. It will soon be upon us once again daffodil lined river banks, summer migrants swooping over the water and with luck that tightening of the line as a salmon seizes the fly! 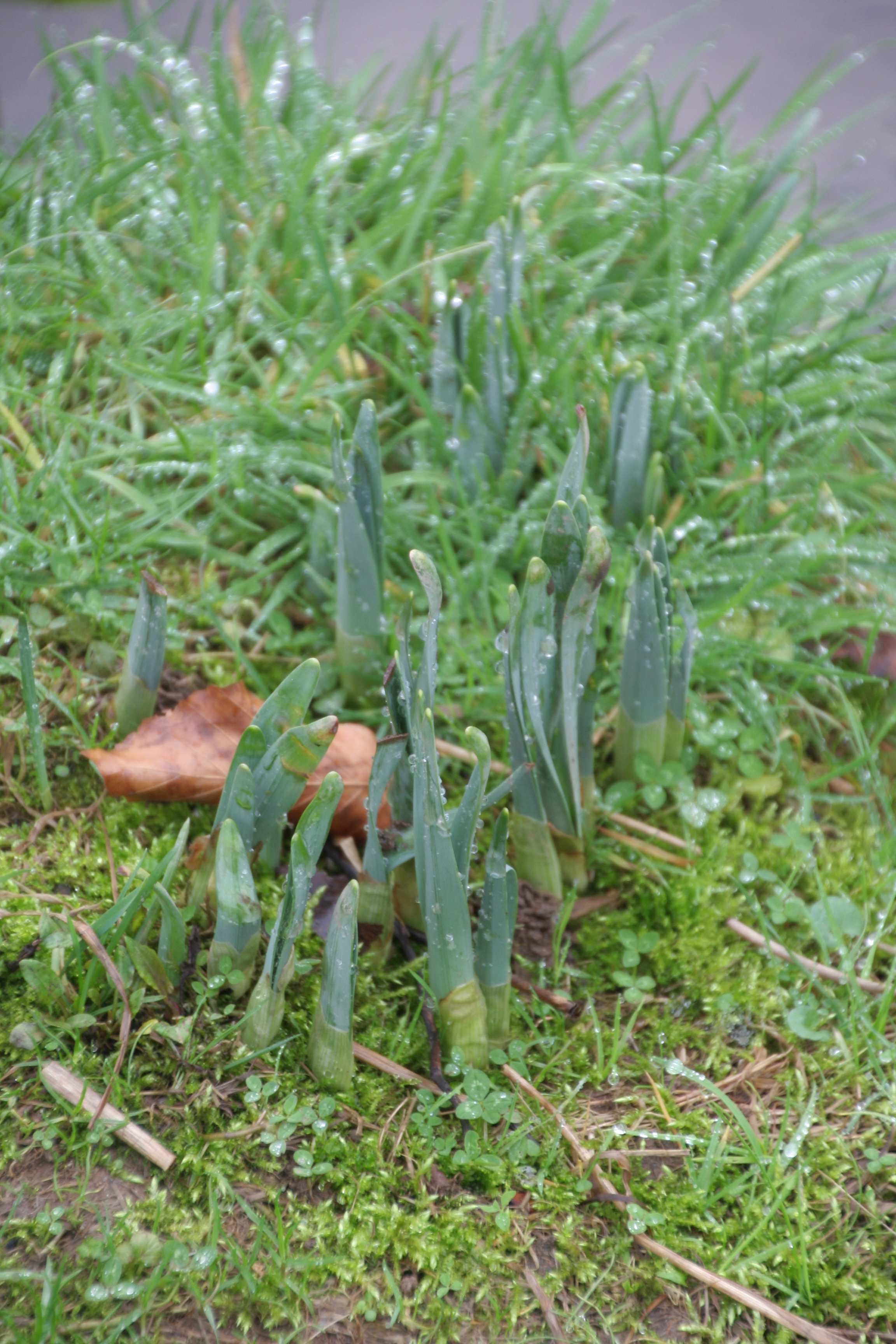 With mild conditions it was never going to be a challenging day and most anglers caught easily. I caught my bag using a bead headed black and green tadpole, a varied retrieve proved effective. After completing my bag I took a stroll around the lake chatting with fellow club members. I was also shown a few fascinating behind the scenes projects including a project to restock freshwater pearl mussels into the Torridge. We were also shown future generations of stock fish. A 2lb rainbow takes around 15 months to rear and a 10lb fish 3 years.

Danny Ford and James Wiggleworth had a great days fishing at Bratton Water banking these stunning fish. The pictures really say it all!

Zyg Gregorek continues his globetrotting adventures achieving yet another milestone as he describes below!

Well done Zyg looking forward to meeting up at the lure fishing weekend at the end of February. 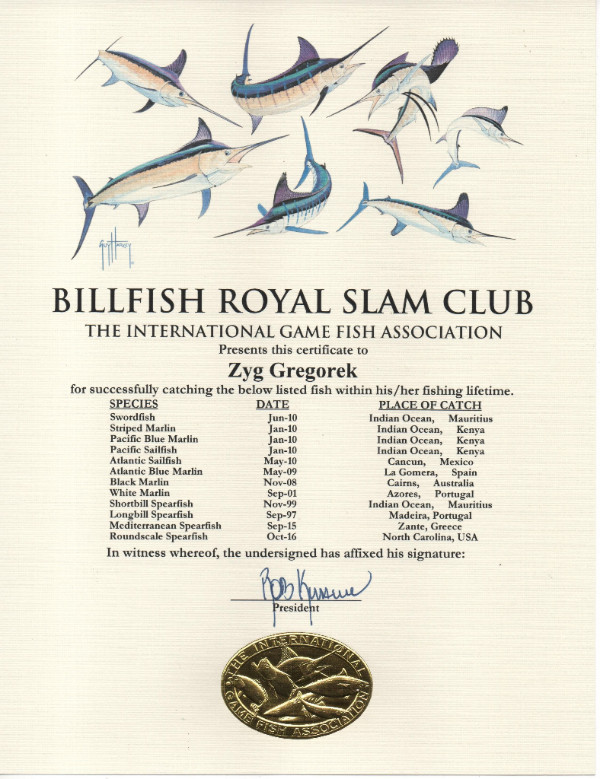 Having recently returned from North Carolina, on my latest quest to catch a Roundscale / Hatchet Spearfish. This was my fifth attempt in the last four years.
I decided to try North Carolina, after contacting several skippers, I picked Dan Rooks on Tuna Duck. Dan has fished the area for nearly 20 years and was very knowledgeable on the necessary identification patterns. He was very willing and wanted to help our expedition. Despite adverse weather conditions surrounding Hurricane Ermine, of the many Marlin caught during the four days only two of the fish were positively identified by Dan as Roundscale Spearfish. Thank God. Mission accomplished.
All fish were photographed and released.
Following the skippers report to the IGFA and photographic evidence. I can now confirm and am very proud to say I finally caught the Roundscale Spearfish and have now caught all the known Spearfish species, Long Billed, Short Billed, Mediterranean the elusive Roundscale. I believe I am the only person to have achieved this feat.
In addition following the capture of the Roundscale Spearfish I have achieved the coveted IGFA Royal Billfish Slam with 12 different species.

If you try hard enough you will achieve.

I have heard a few whispers of fine ray catches by shore anglers up Channel on the Somerset coast. Kevin Legge and Craig McCloughlin paid a visit to a shore mark after dark and landed several ray including a specimen blondes of 13lb 9oz for Craig and a 12lb 10oz blonde for Kevin.

James Atkinson was thrilled to get the New Year off to great start landing his first spurdog of 8lb 7.5oz. This just a few days after landing a 20lb 9oz cod off Minehead. 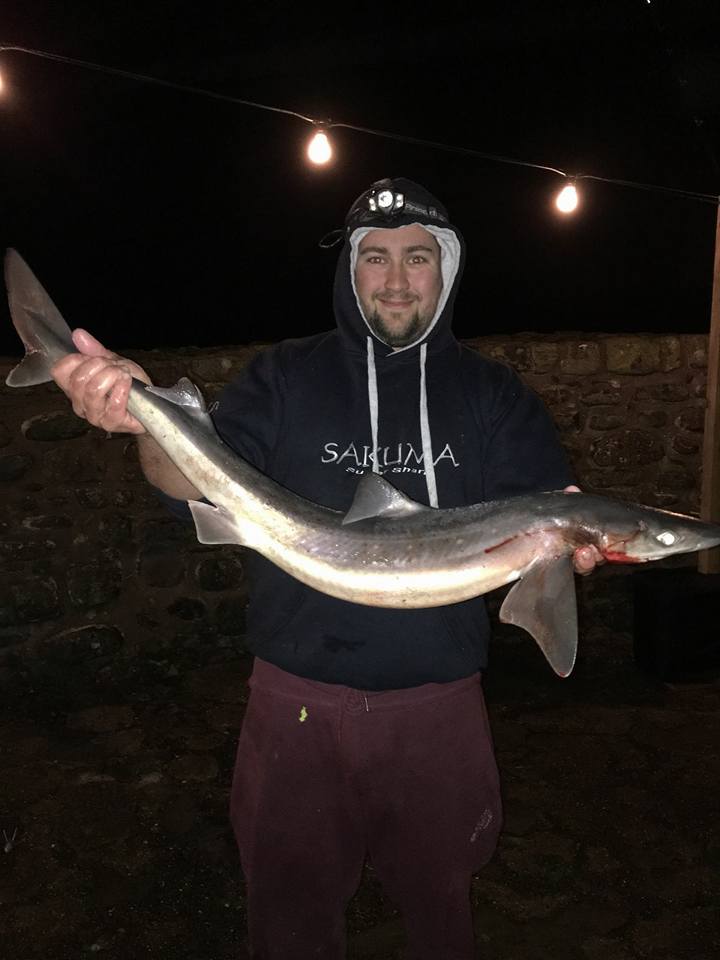