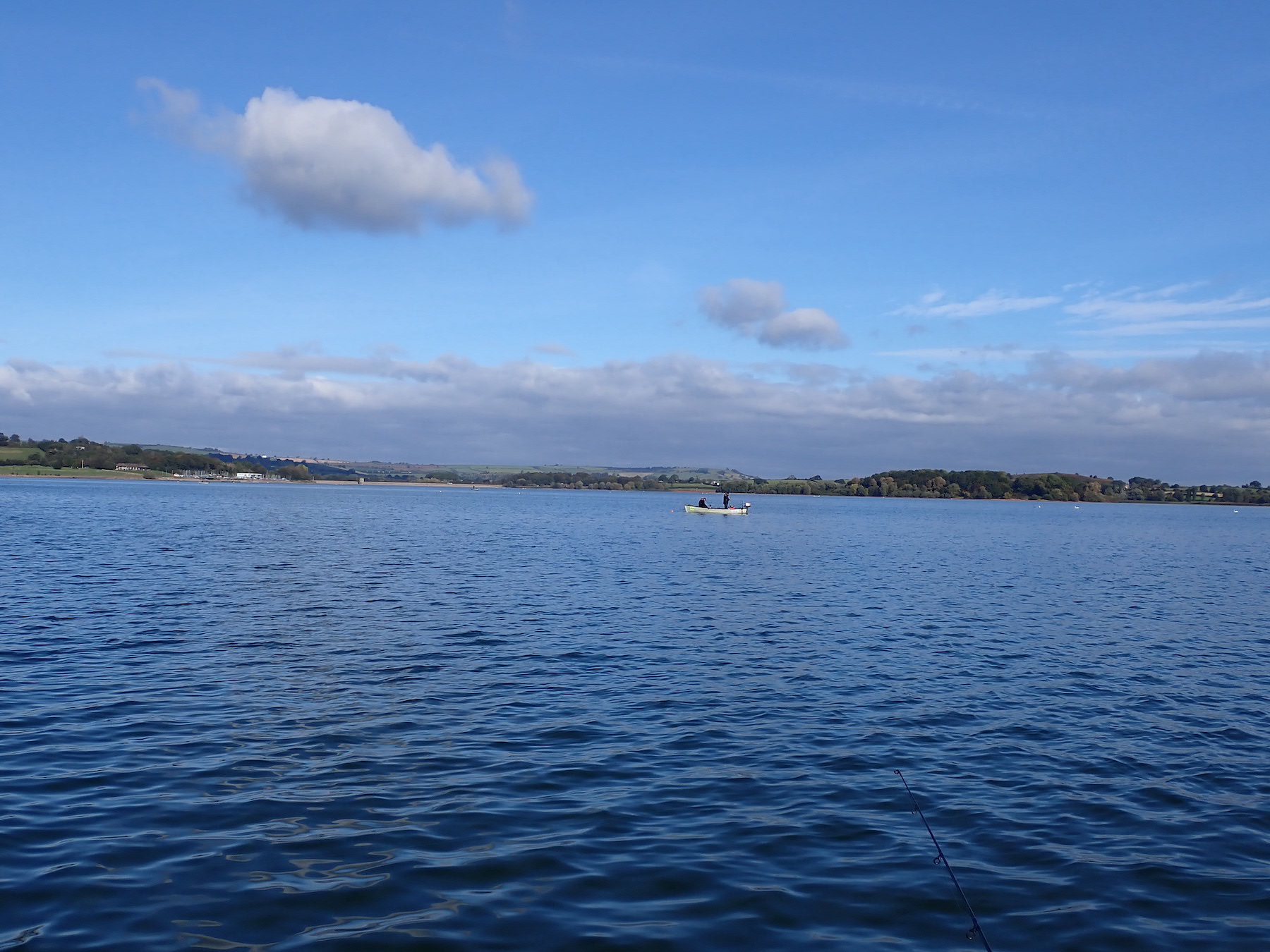 There is always a feeling of intense anticipation as a visit to Chew Valley lake approaches. The vast water undoubtedly holds numerous pike of a lifetime but the reality is that such fish are hard to come by. Catching a big pike is like most specimen fishing a combination of being in the right place at the right time. A slice of luck can play its part and ensuring that everything is in place for when connection is made seals the deal.

I was very fortunate to have been invited to join my good friend Bruce Elston who had secured tickets to fish the boat trials. Early October and the weather was set fair with  a blue sky and calm waters.

Due to other commitment’s, I didn’t arrive until late morning and climbed into the boat to find that Bruce had boated two jacks and had several follows. We started off with a bit of trolling using Bruce’s electric outboard. After a short while Bruce boated a jack of 5lb or so which was an encouraging start. 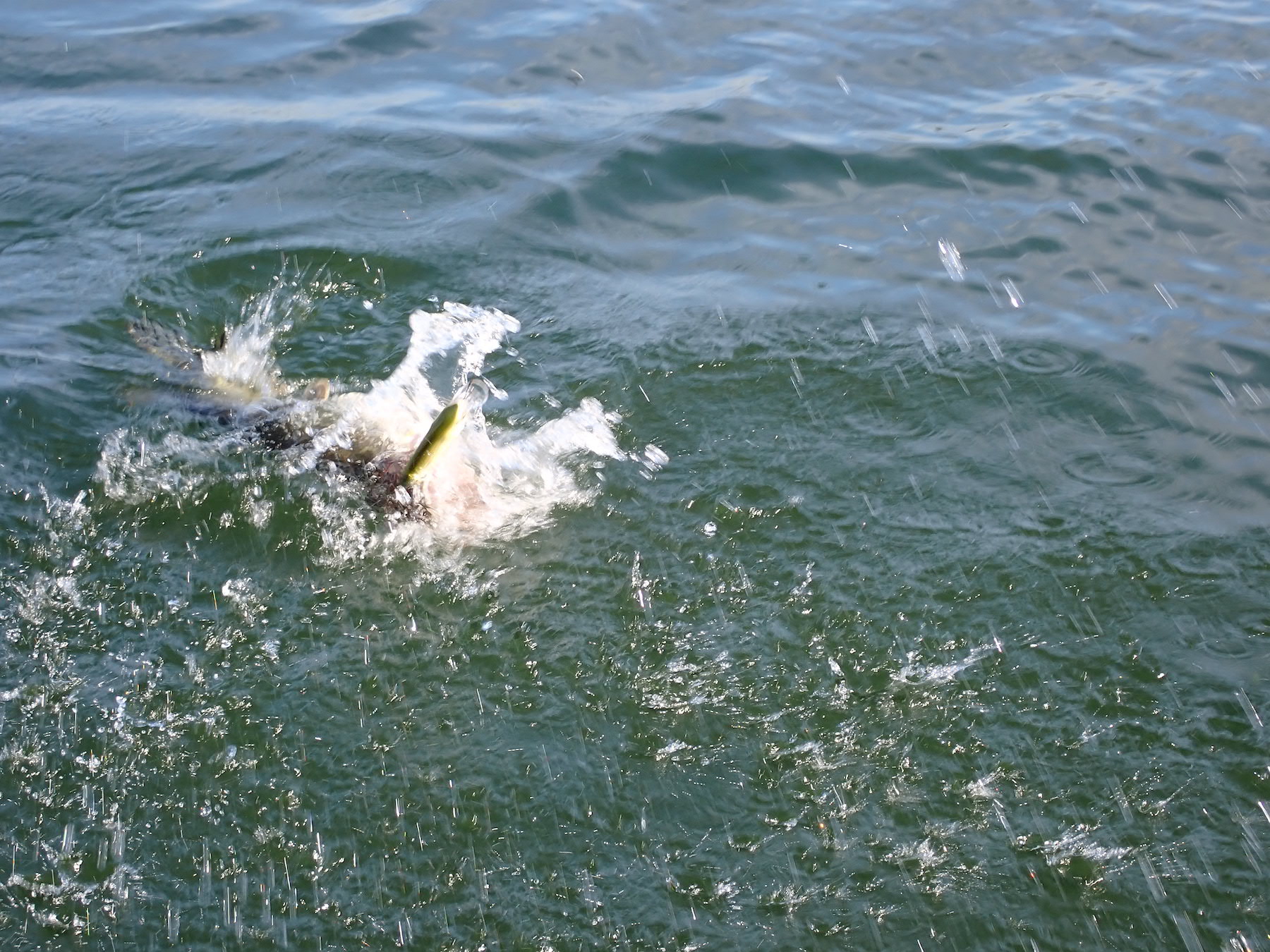 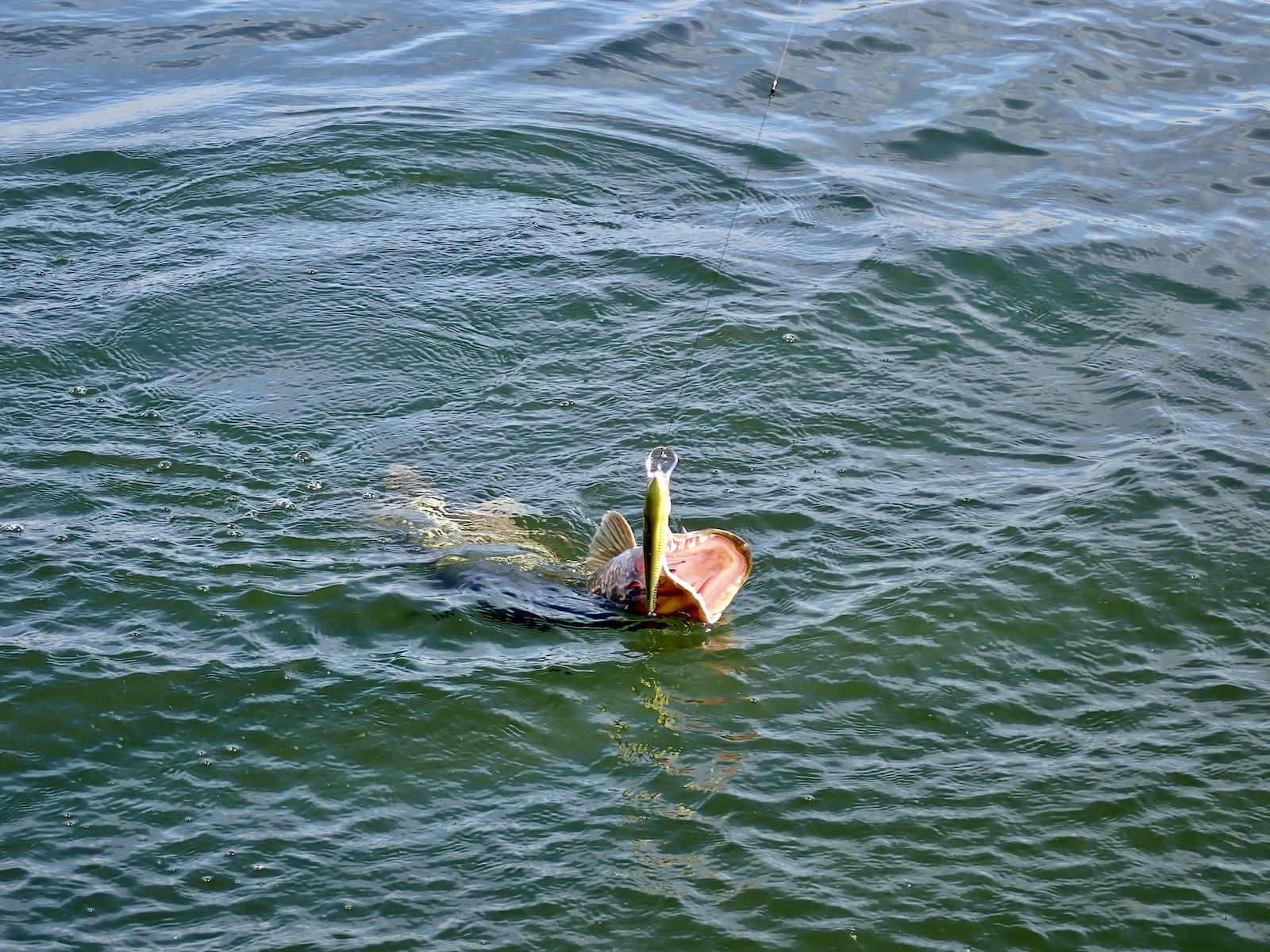 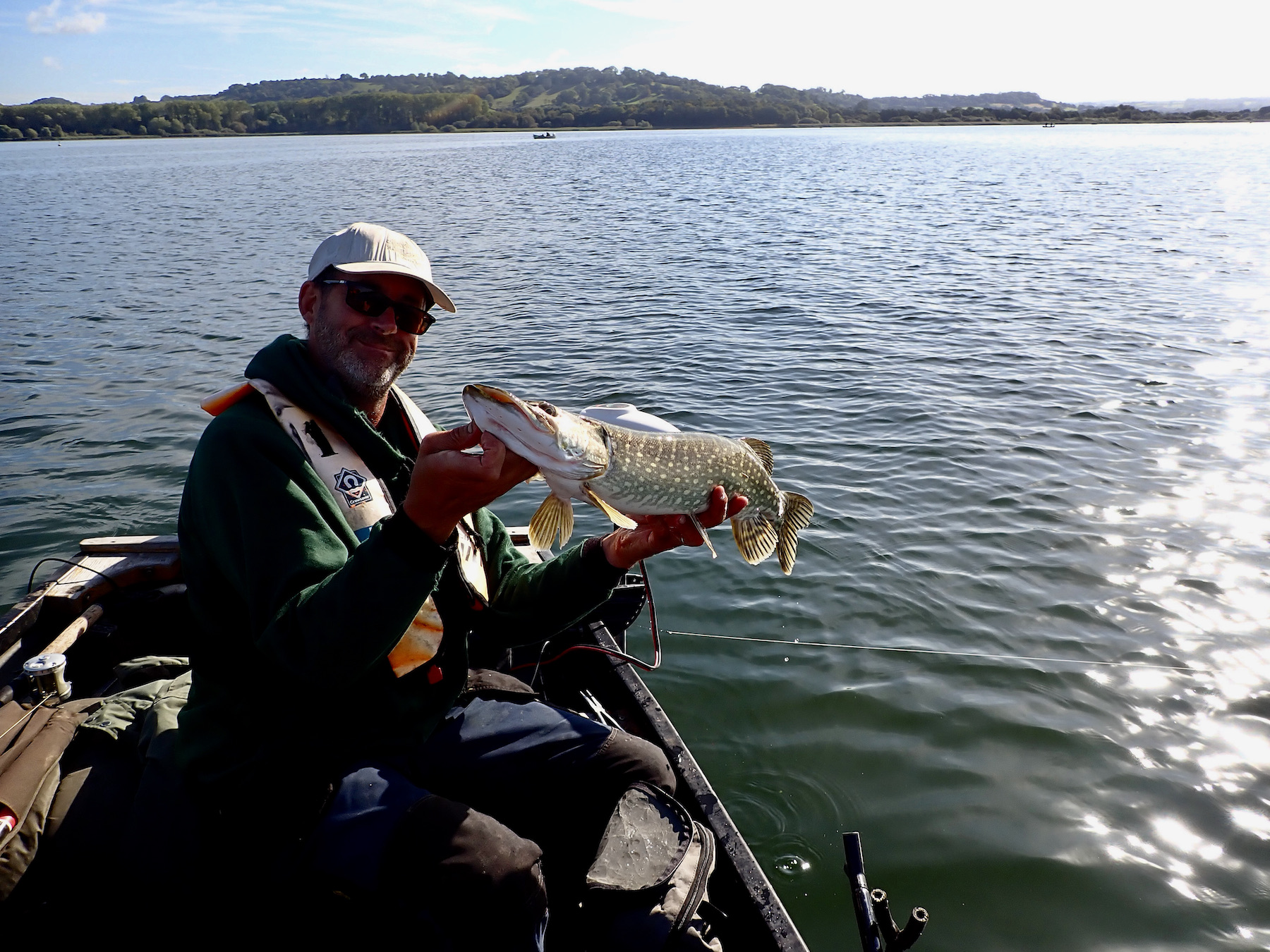 The rest of the day was spent using varied tactics. Anchoring up for periods we put out a float fished dead-bait and searched around the boat using various lures. I experimented with some of my soft plastic bass lures and had a few hits without contacting the culprits. A change to a bright orange shad pattern also brought a few tugs, pulls and  follows from small jacks and trout.

We also enjoyed spells drifting with a dead-bait suspended a few feet above the bottom whilst searching with the lures. 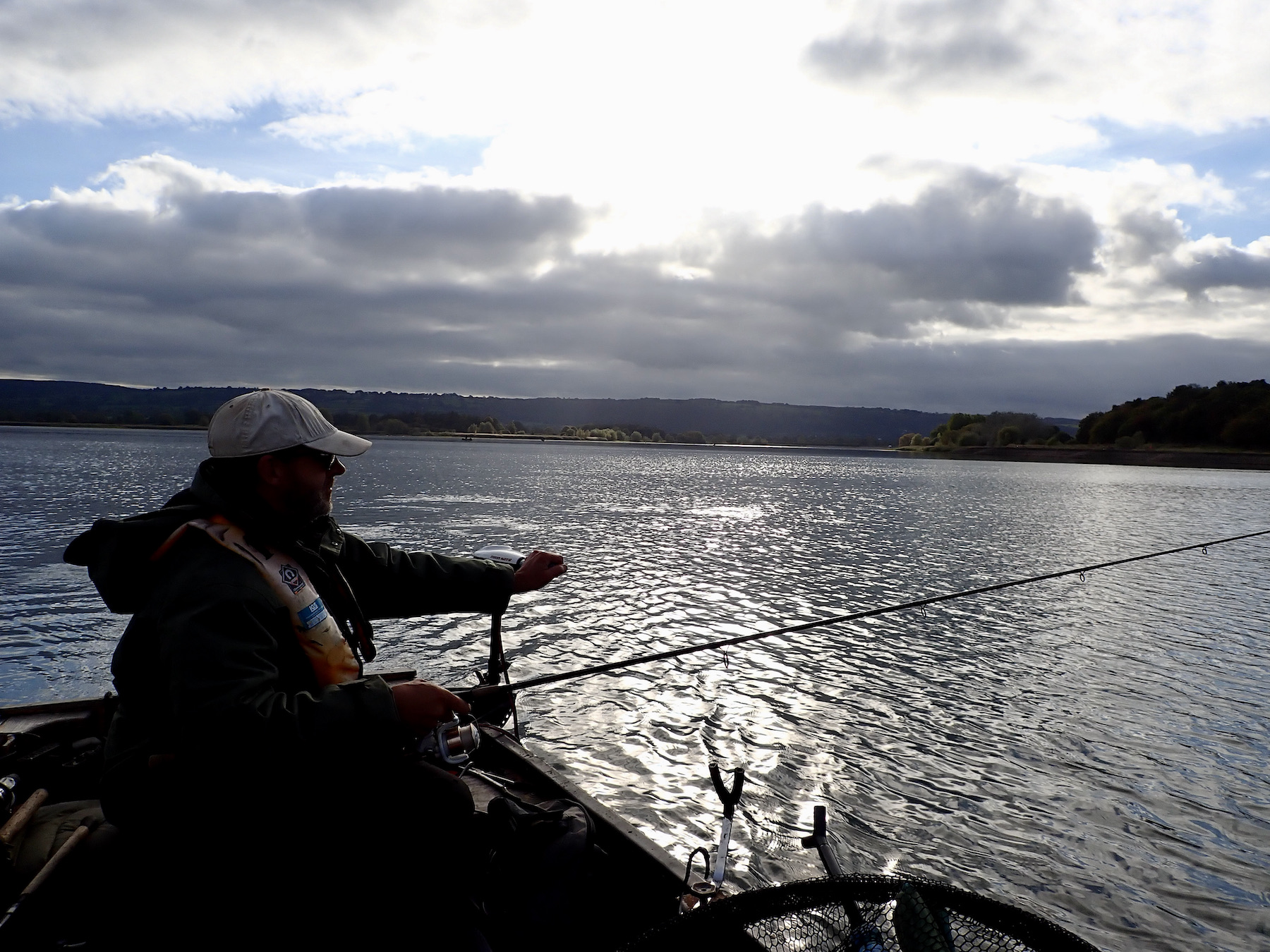 As evening approached and the sun sank lower we savoured the scene. We chatted about lures and I dug a bright orange and yellow spring dawg from my old lure bucket. “They have gone out of fashion” commented Bruce. A few moments later a jack hit the lure and was brought to the boat side. To my relief it saved me unhooking it by erupting from the water to shower us in spray, shaking the hooks free. I was pleased to have avoided a blank trip. 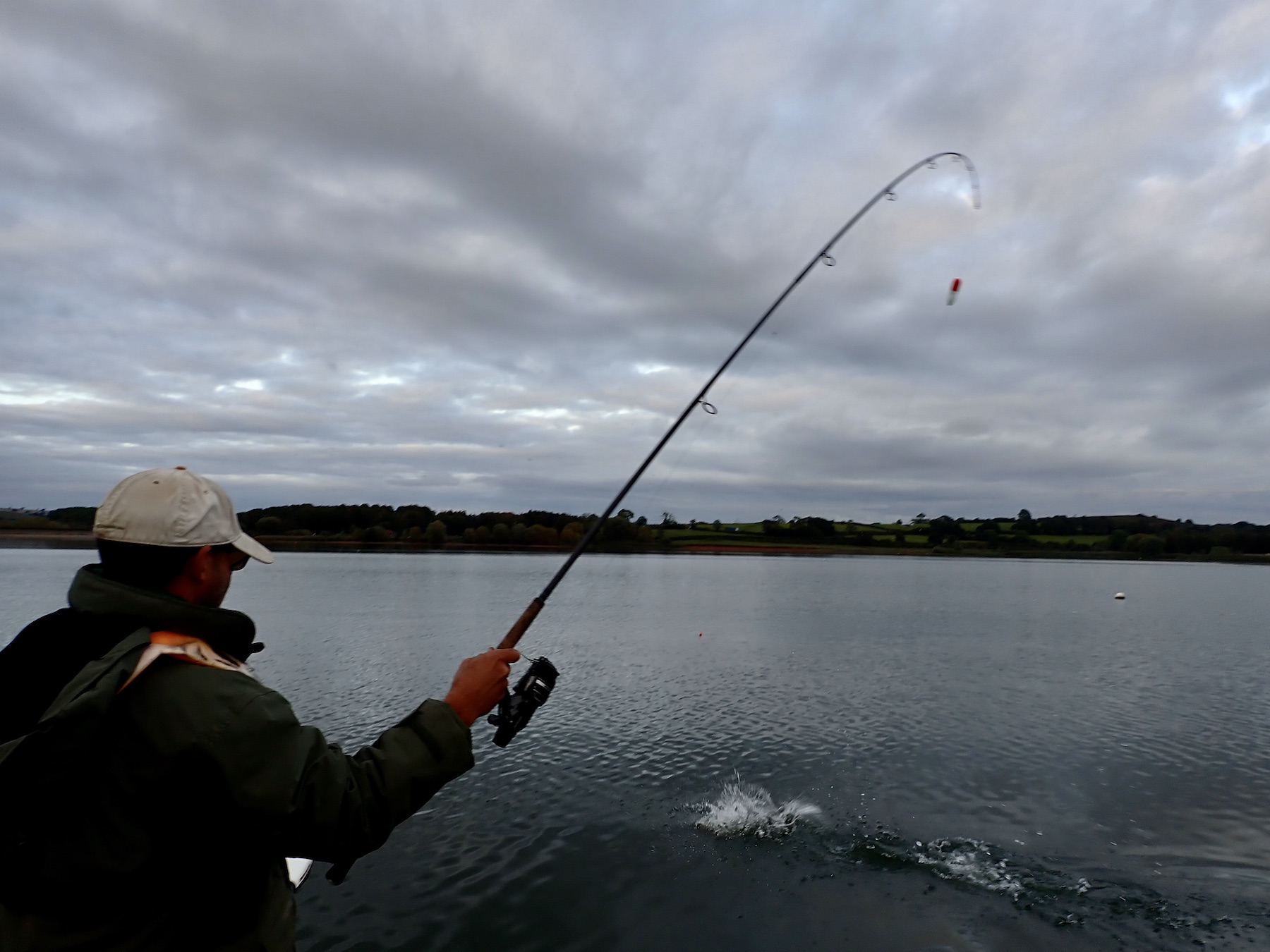 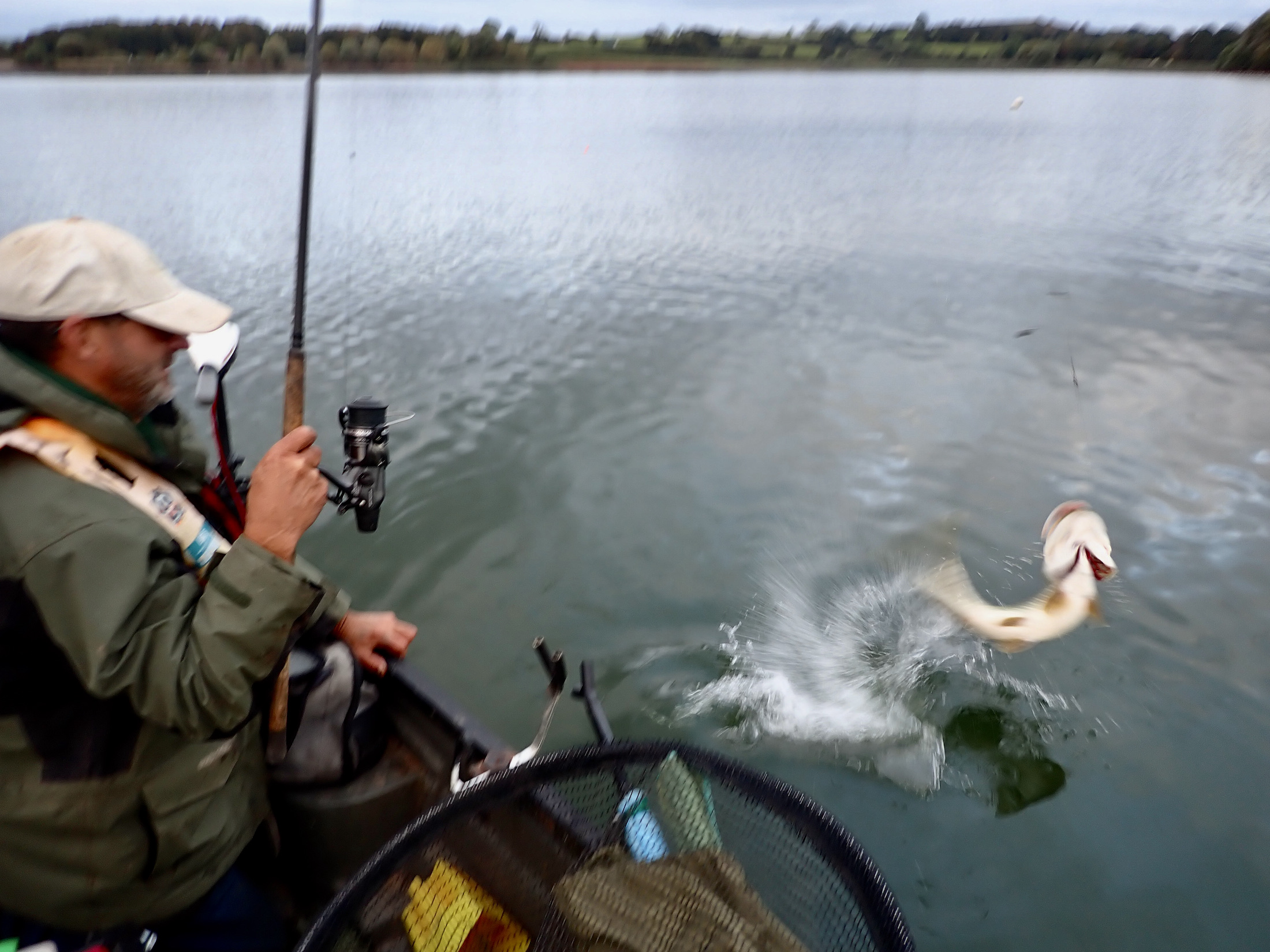 The cry of Bruce’s reel alerted us that a pike had taken a mackerel dead-bait. I watched hoping that this would be a big un as Bruce set the hooks. Unfortunately, it was another jack. A few moments later I boated my second pike of the day a small jack of a couple of pounds tempted on a wobbled smelt. 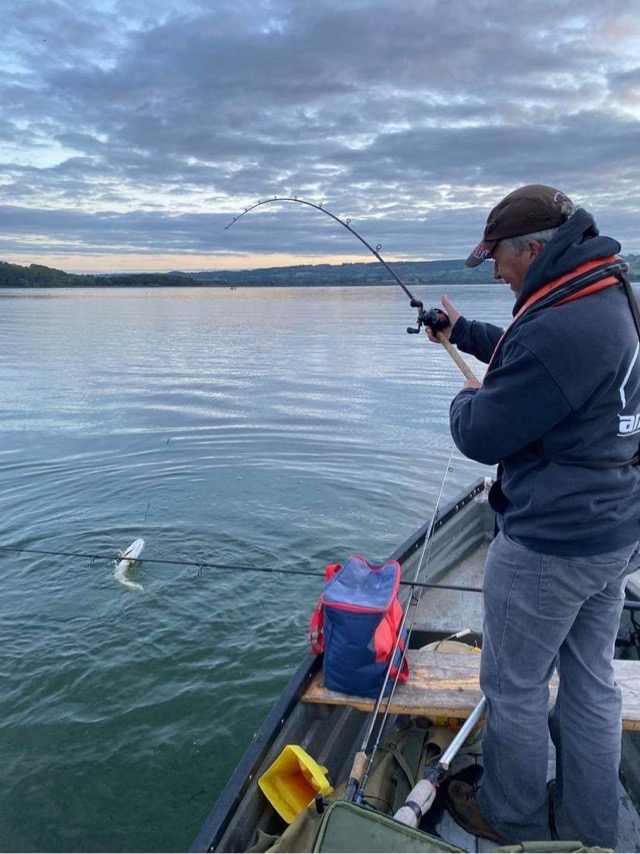 As the sun slowly sank we were forced to head back to the lodge another enjoyable day chasing dreams and creating memories. 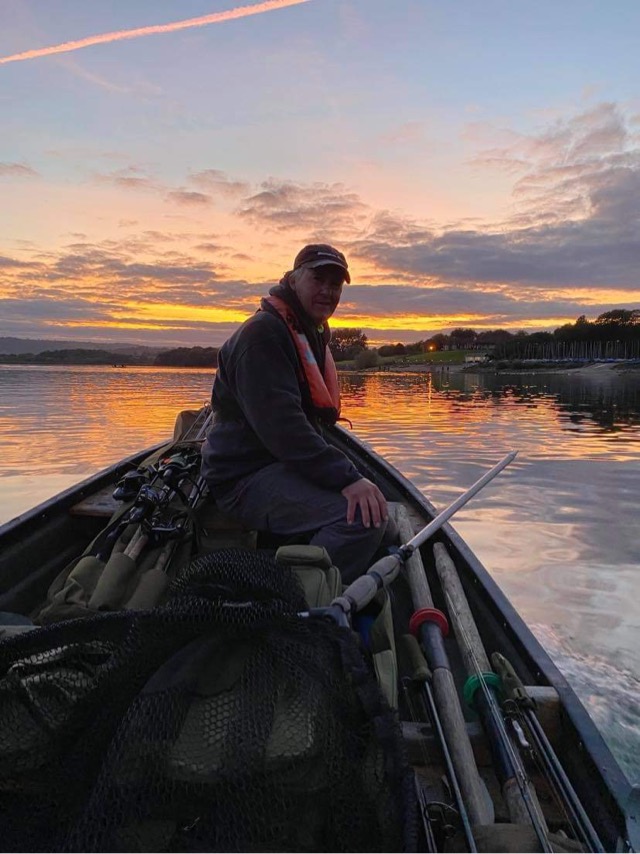 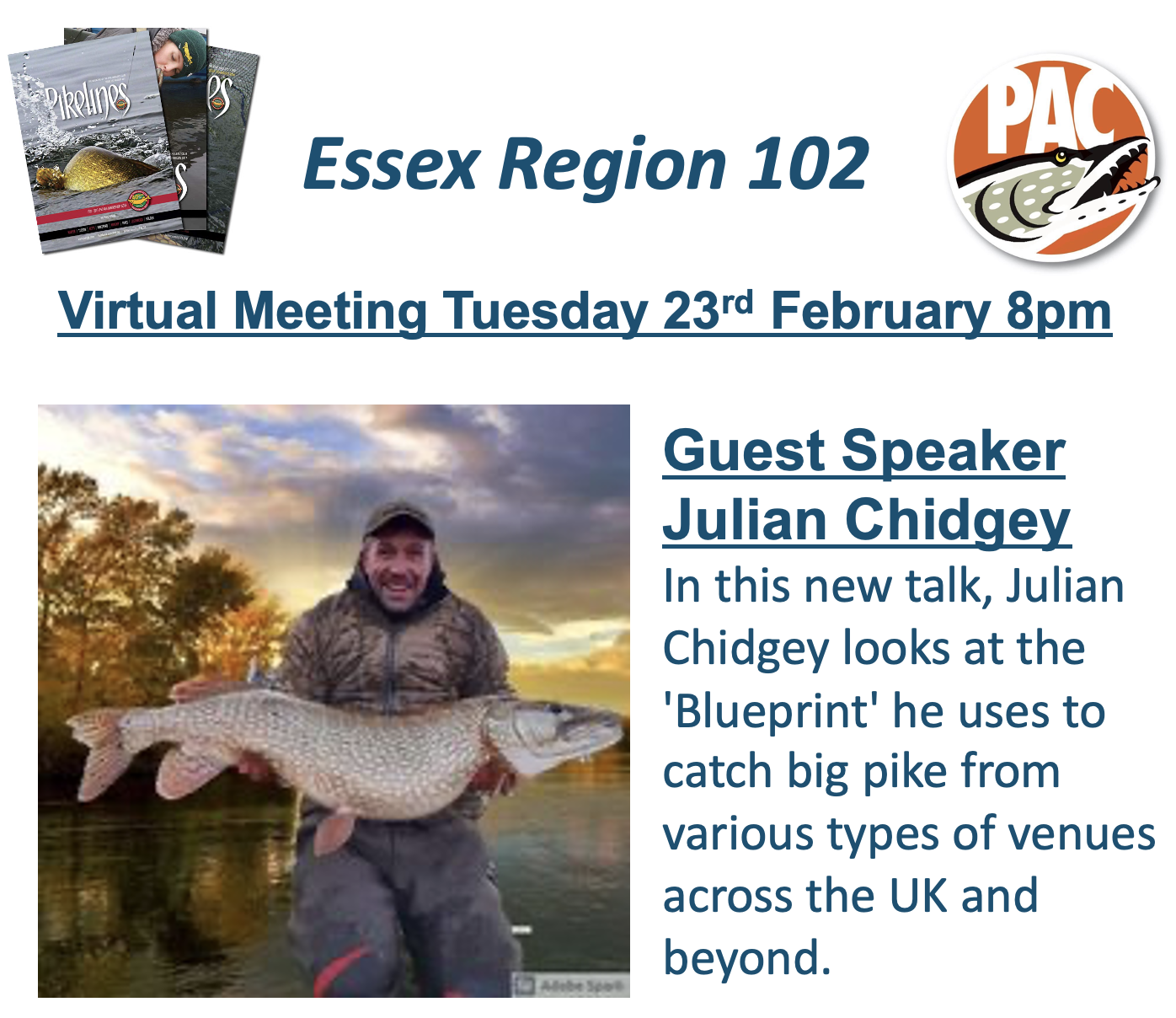 Respected West Country based Specimen Hunter Julian Chidgey is presenting a talk on catching Big Pike across the UK and beyond. 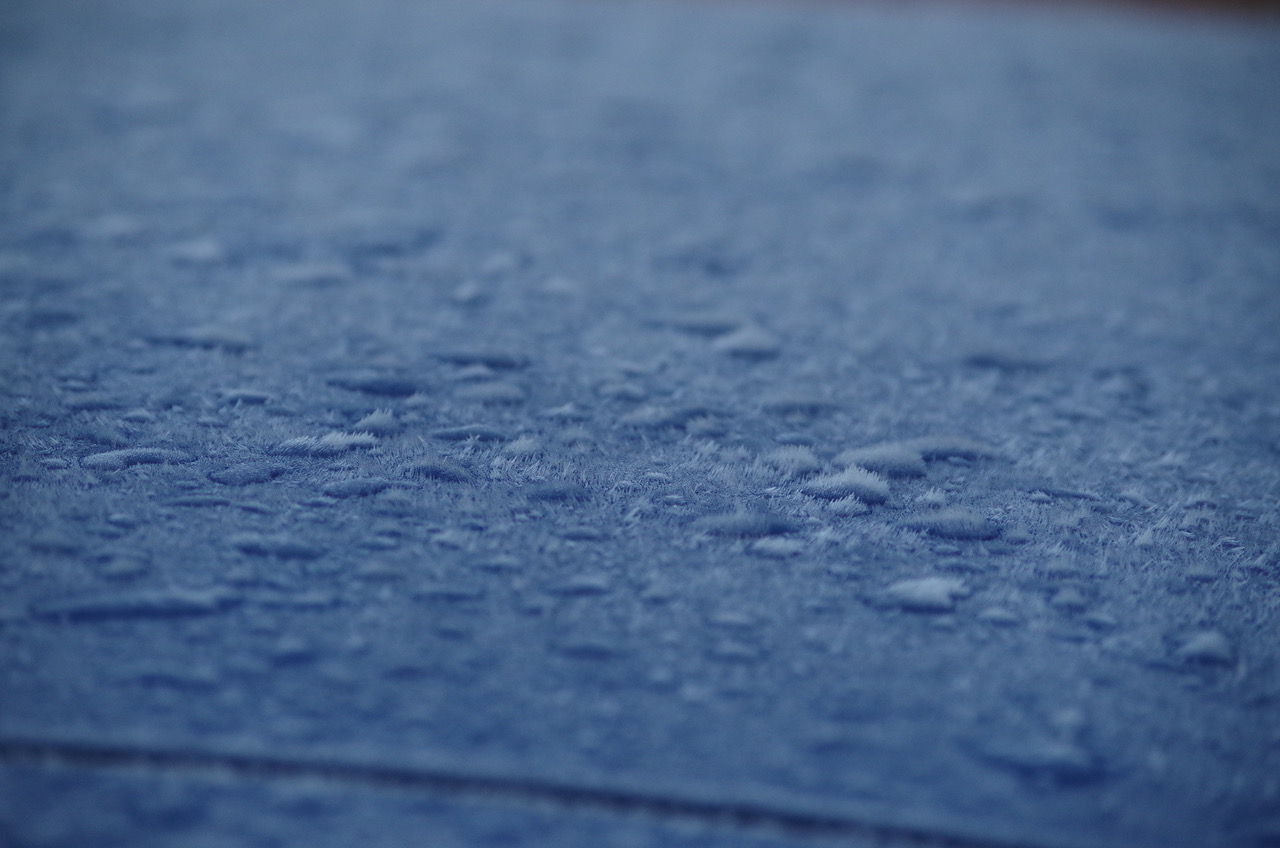 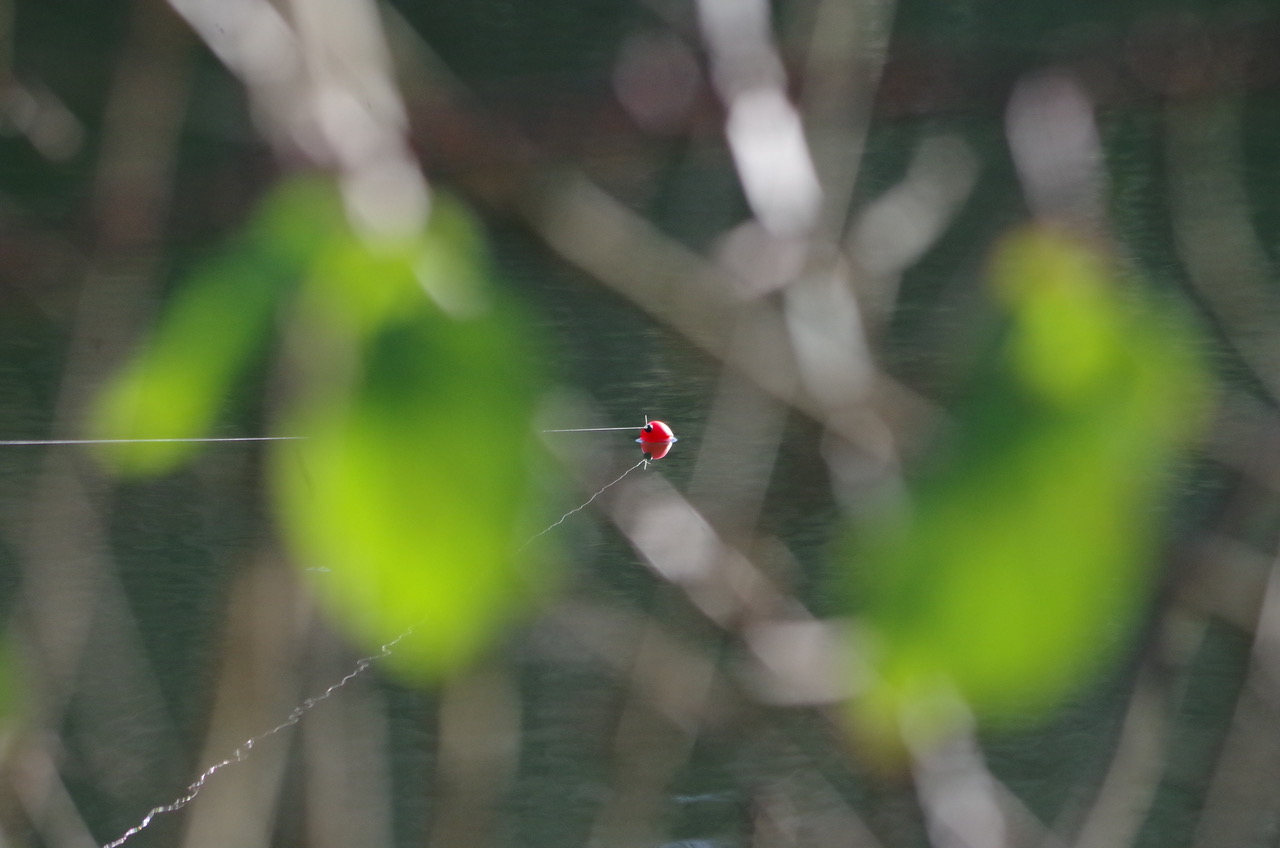 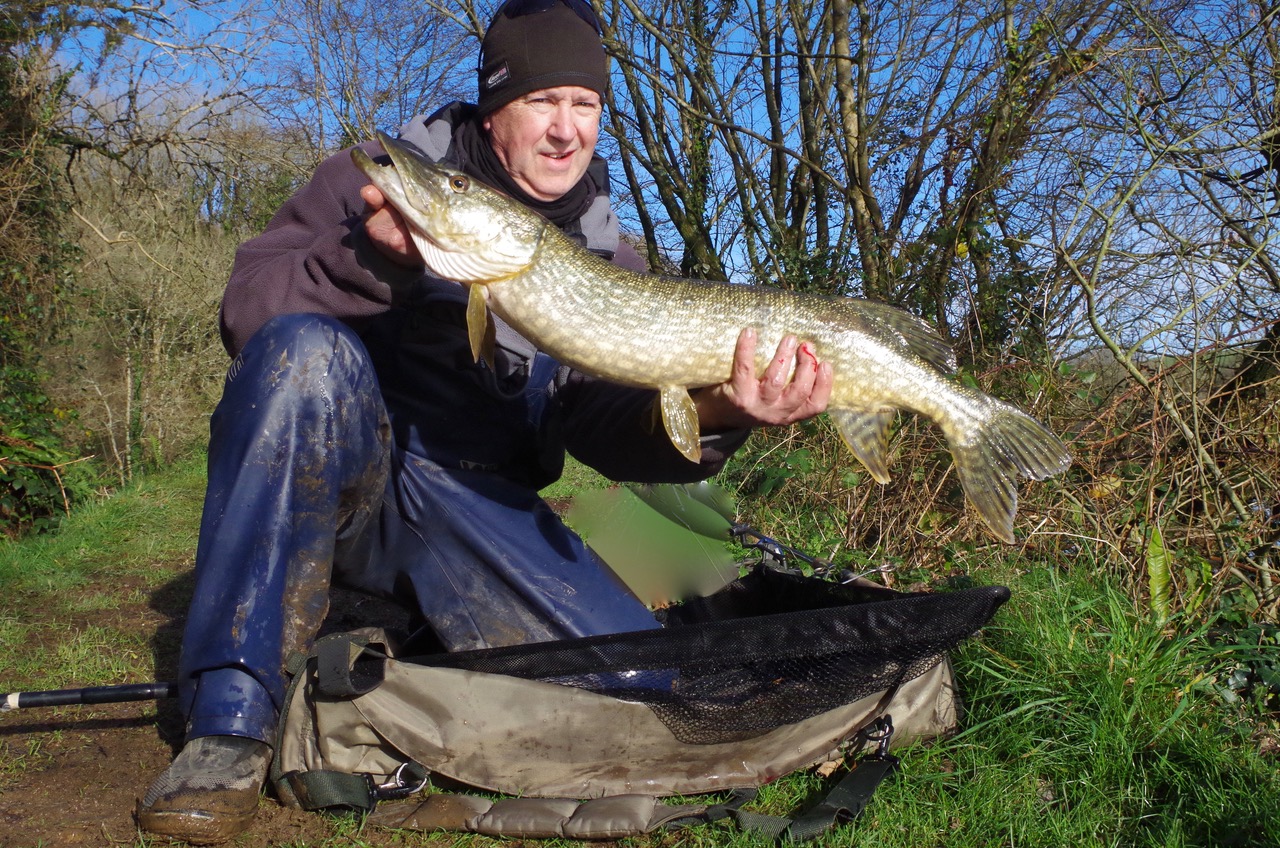 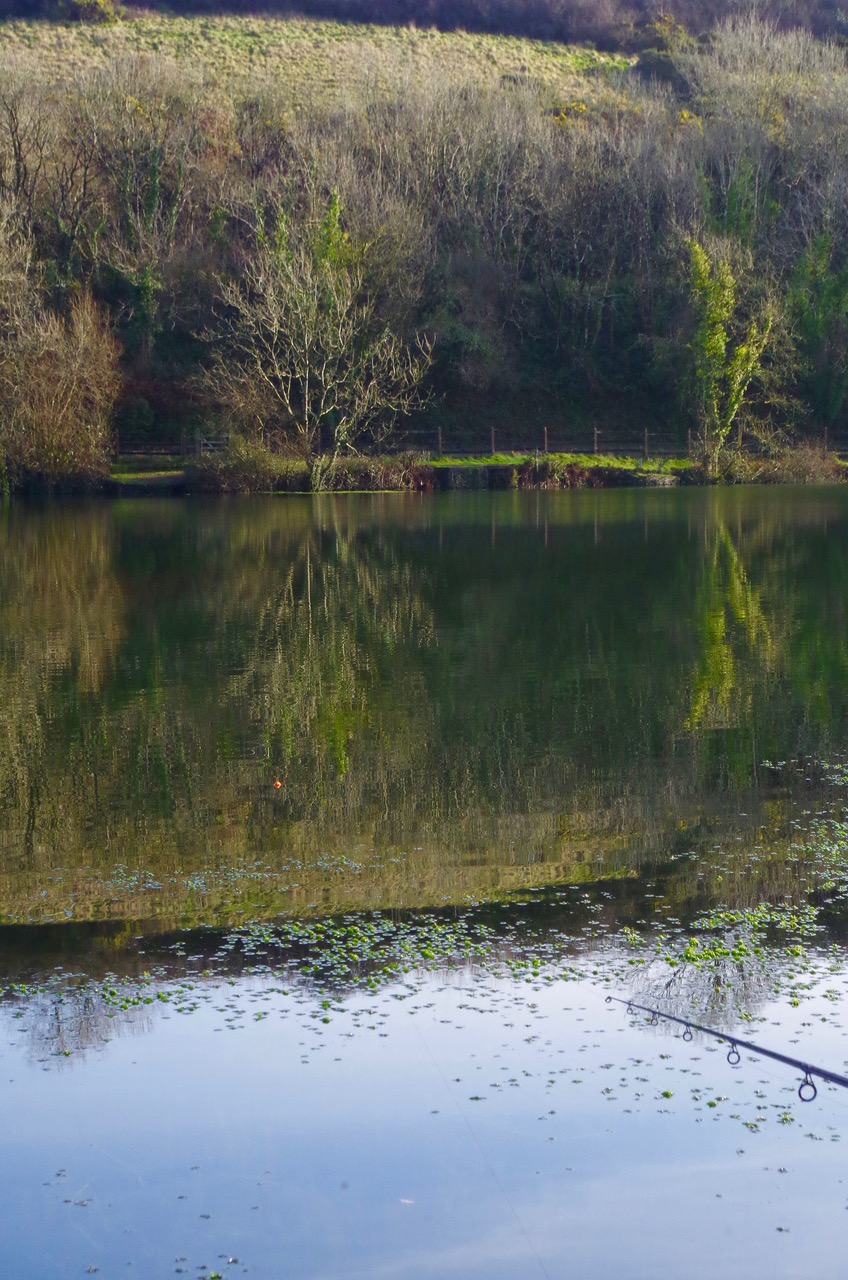 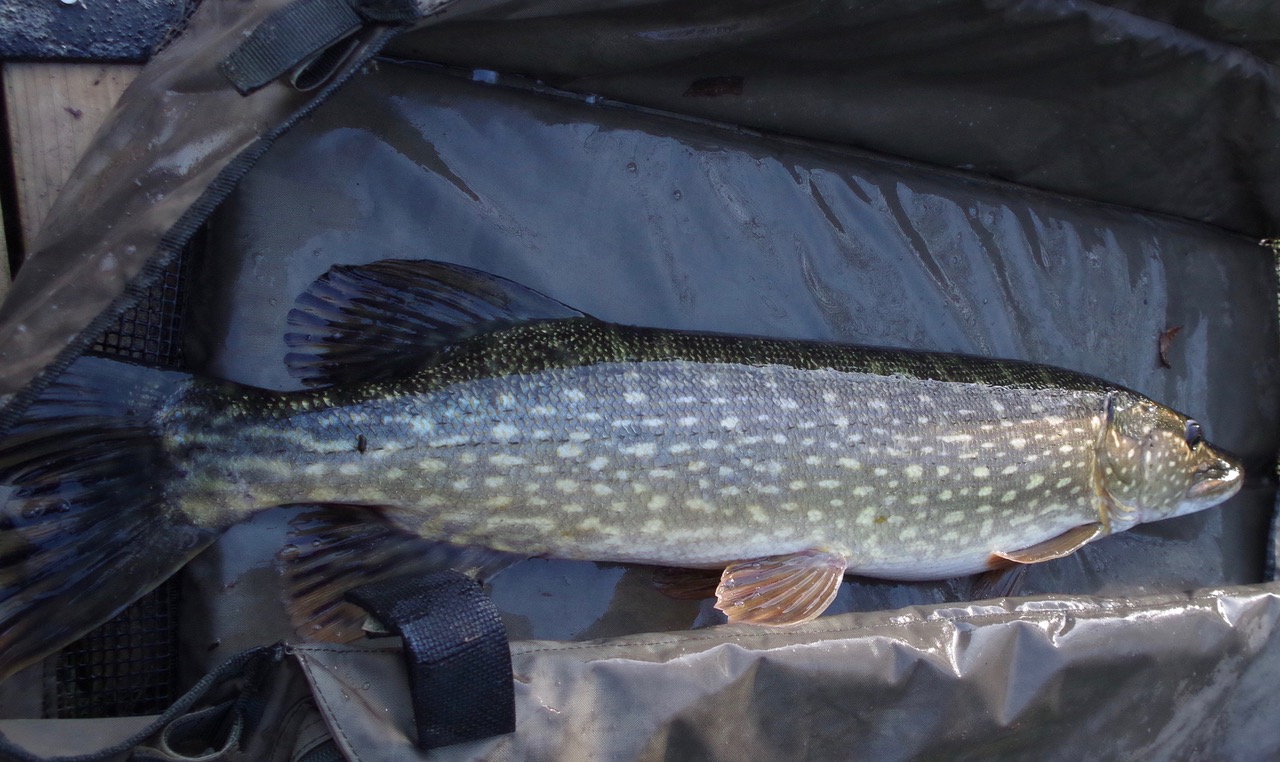 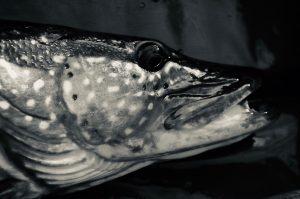 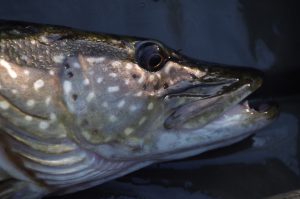 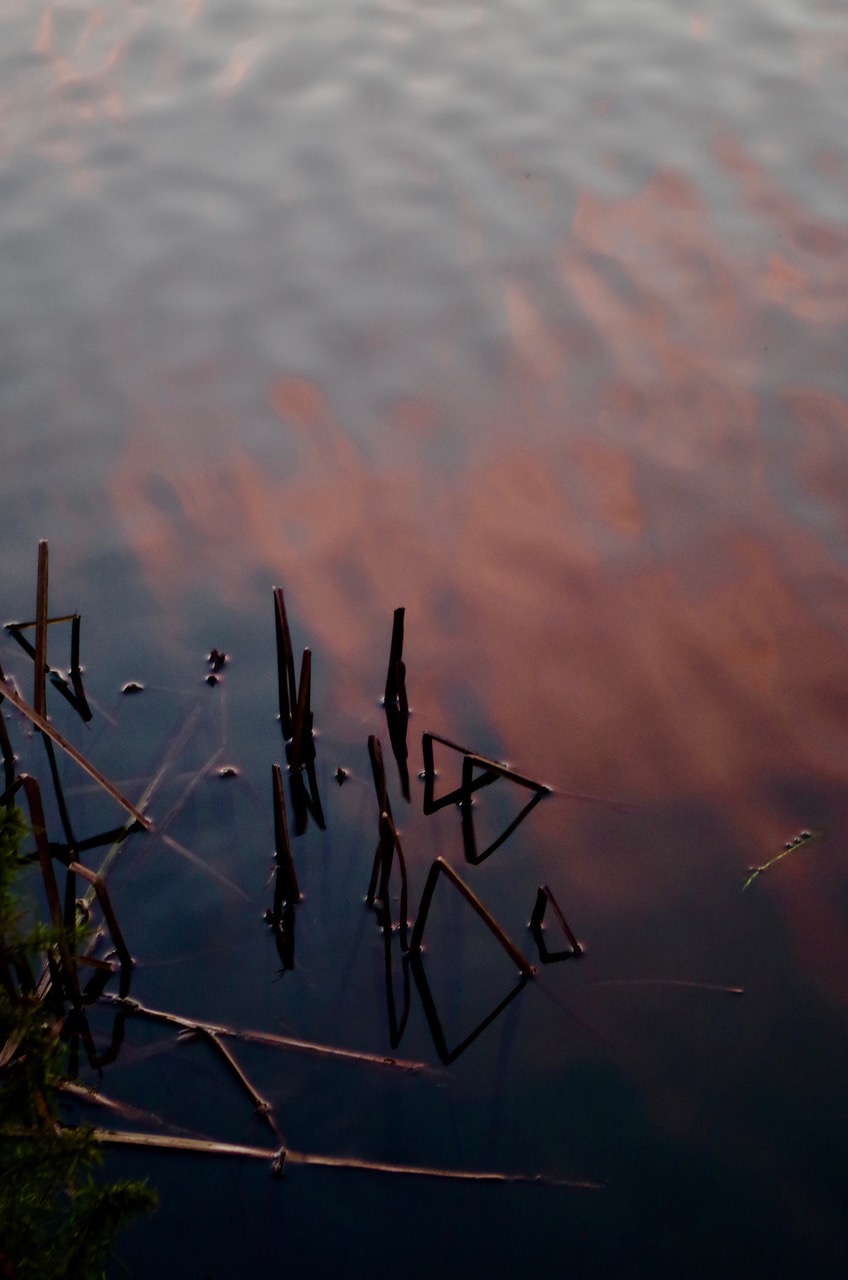 Simpson Valley Coarse and Trout Fishery is set in a peaceful valley near Holsworthy amid over 140 acres of farmland. The complex boasts several lakes that hold a variety of species that can be targeted using a wide variety of tactics. I visited the venue with Snowbee tackle representative Jeff Pearce in the hope of contacting one of the venues big pike on fly fishing tactics. Mallard lake has been stocked with a good number of pike the biggest nudging 30lb with several topping 20lb.

The pike proved reluctant to play the game so we enjoyed an interlude in our predator hunt and targetted the trout of Jenny Wren Lake where I was delighted to catch my first tiger trout and a stunning rainbow of around 4lb that gave a terrific scrap in the cold water. 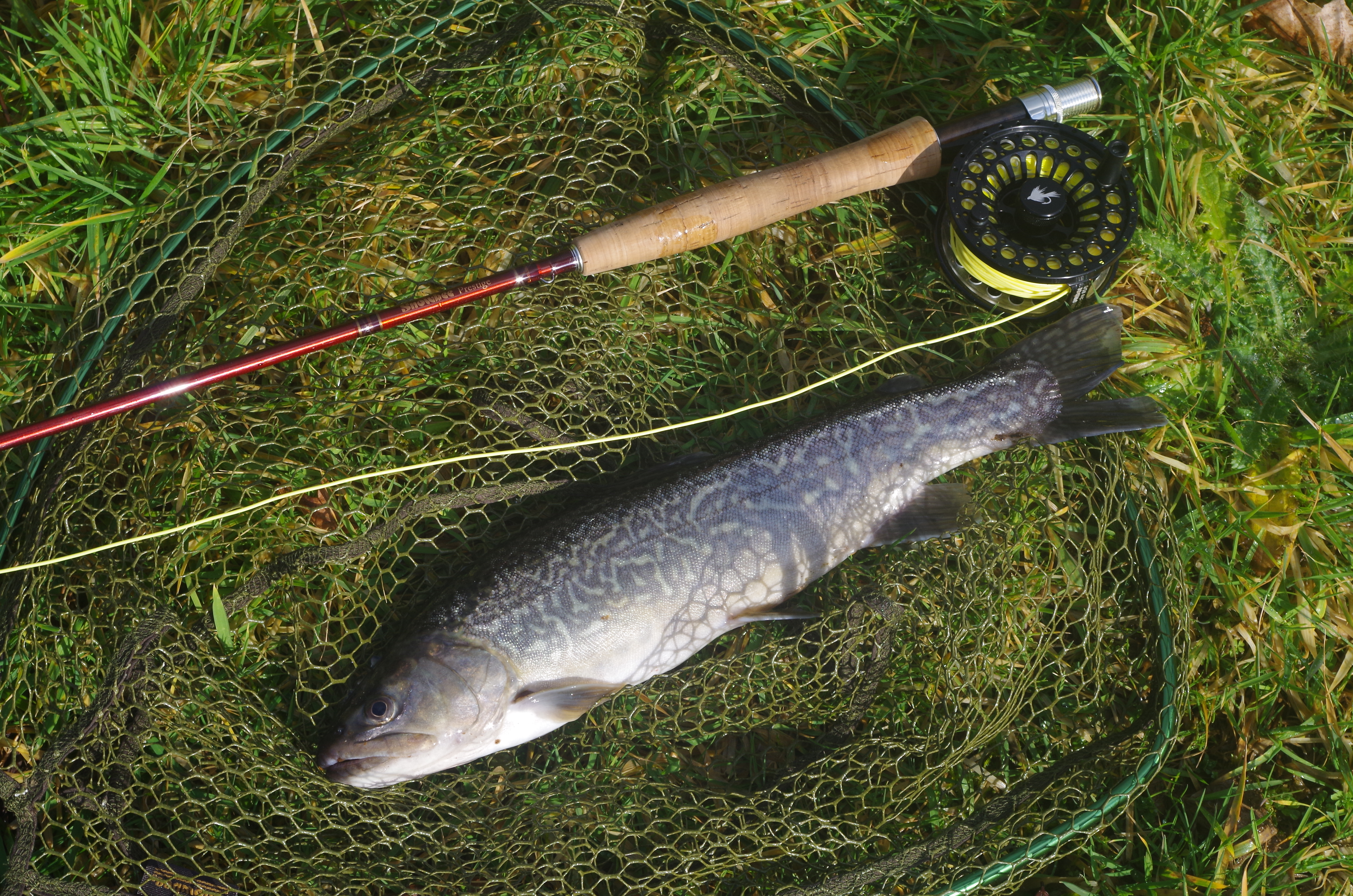 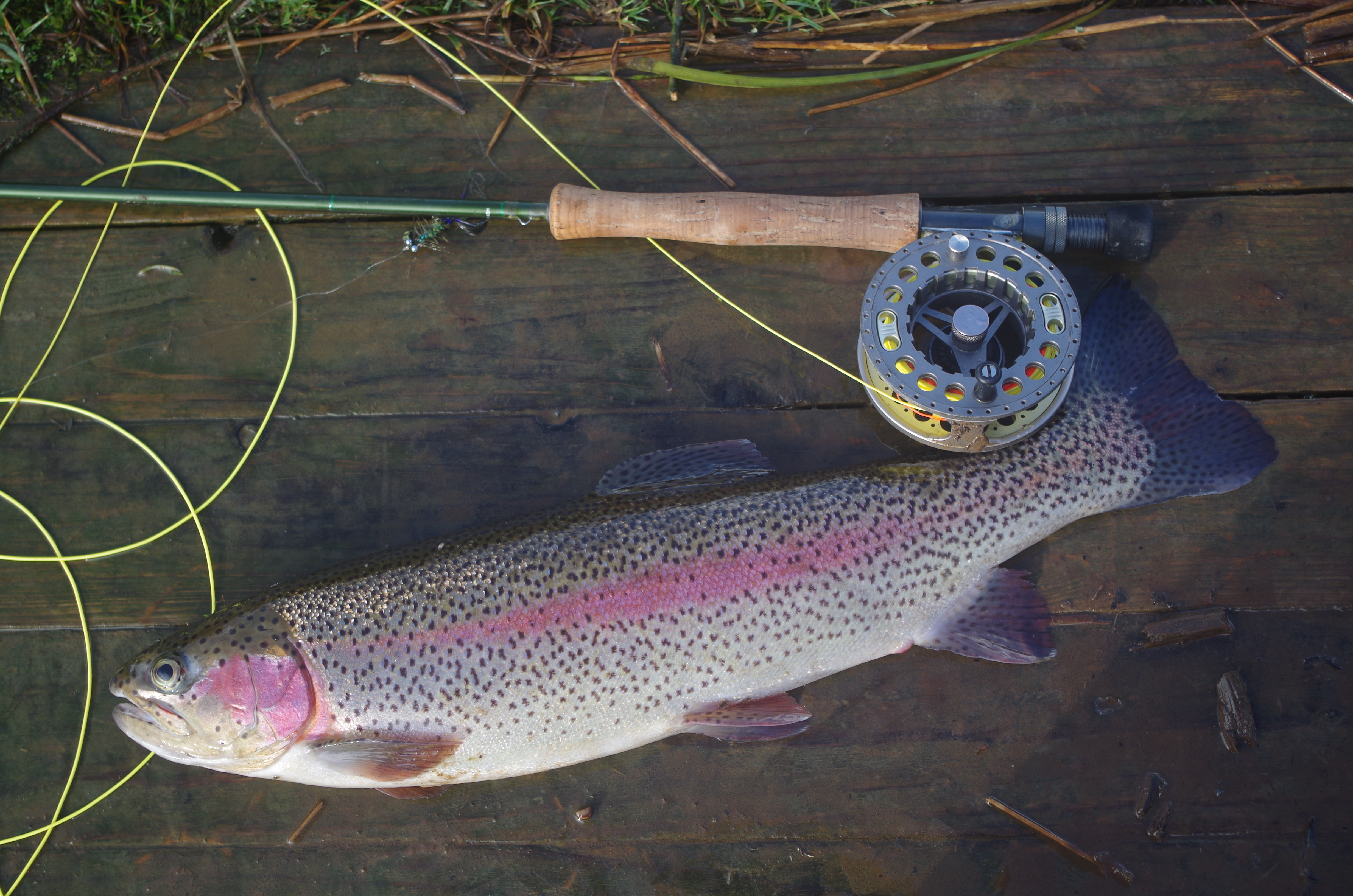 We were joined at Jenny Wren’s fishing hut by fishery Manager Andrew Moore who made us a welcome hot cup of coffee. Andrew chatted enthusiastically about Simpson’s Valley and of its fishing and plans for the future. The five lakes on the complex offer pike to thirty pound, carp to 35lb, along with specimen perch, eels, chub,trout and other species. There is a unique opportunity to target rainbow trout using LRF tactics on Skylark lake where catch and release is permitted during the winter months. This style of fishing is an ideal opportunity for young anglers to enjoy great sport without having to master the complexity’s of fly fishing. 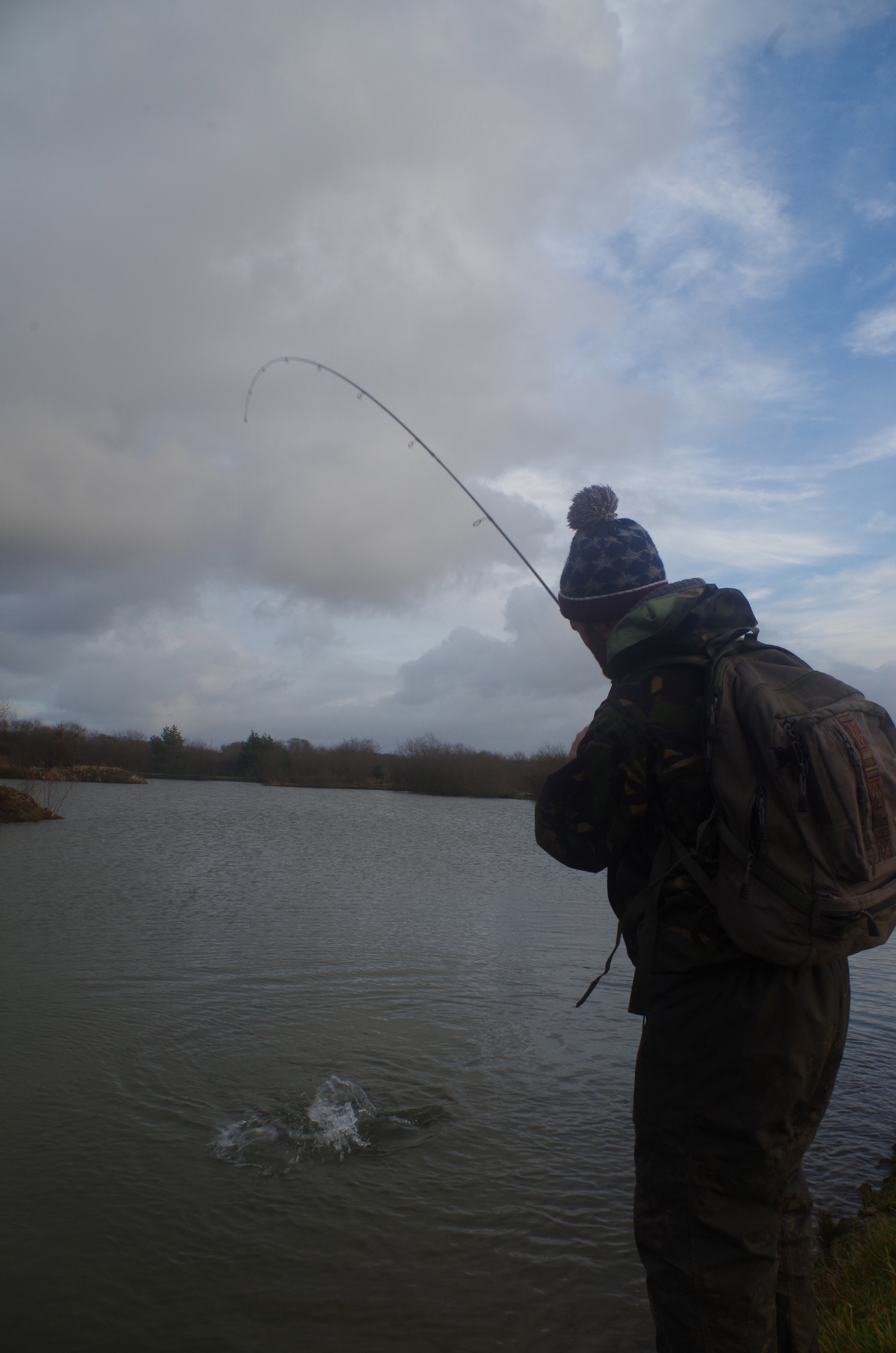 We returned to Mallard Lake after our informative chat with Andrew and once again set about tempting a pike with our Fly Tackle. On two occasions I thought I had hooked pike but found that plump rainbow trout of close to four pounds had seized my four inch long pike fly! We will be back again and next time I may well sit it out with a dead-bait. If I don’t get sidetracked by trout or other species.

Opportunities to fish for pike are limited in North Devon with only around half a dozen venues holding the species. If you fancy a try at pike fishing Anglers Paradise has a good stock of these toothy critters available to target with lures. See report from Zenia at AP below. 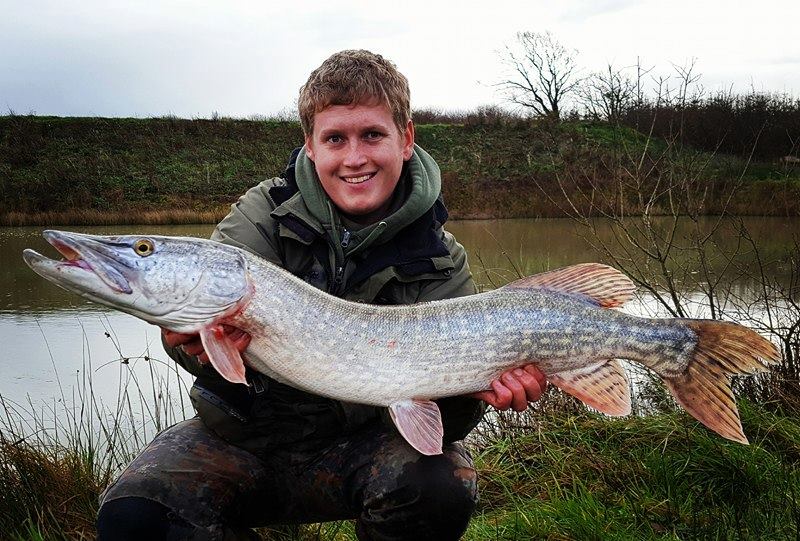 Ashley Bunning used his day off work to have a couple of hours on Valhalla. Ashley caught 3 Pike in total with this being the biggest and used a Ecogear Ikajaco Lure to catch them.

Remember our Predator Lake Valhalla is now open for all to fish until February, time to get some Winter Lure Fishing in!

Chay Boggis took a rest from sea angling and visited a local still-water where he landed a double figure pike scaling 11lb 8oz. The fish was tempted using half a mackerel bait and was the only run during the eight hour session. The venue produced a twenty pound plus specimen a few weeks ago. Pike waters are few and far between in North Devon and anglers are reminded to take great care of the fish that are surprisingly delicate creatures that do not tolerate poor handling. It is essential to carry a large landing net, unhooking mat, carry long nosed forceps and always use a wire trace and suitably strong tackle to ensure the fish do not break free to trail lost trace and line. There is nothing sporting in fishing light! 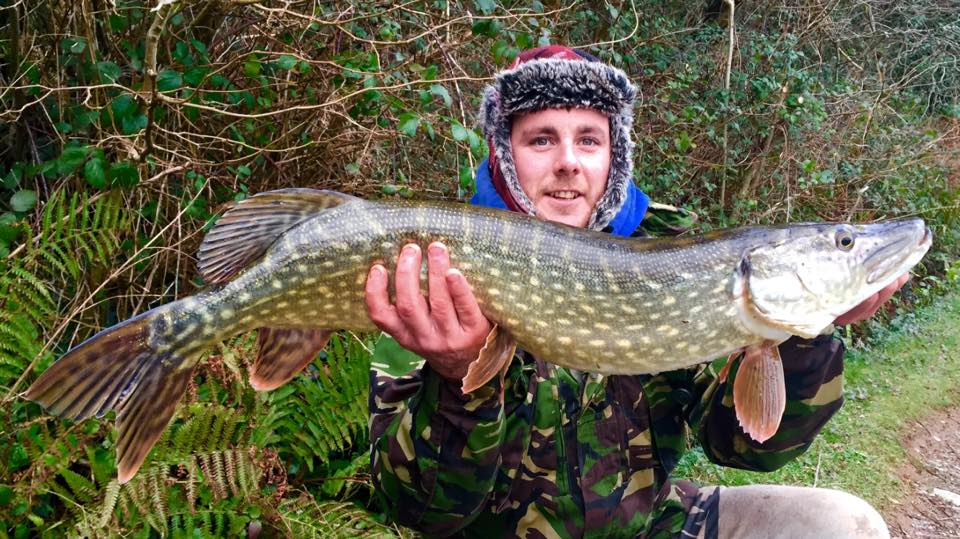