Danny Ford and James Wiggleworth had a great days fishing at Bratton Water banking these stunning fish. The pictures really say it all!

Wistlandpound Fly Fishing Club members enjoyed a brown trout bonanza at Bratton Water Trout Fishery where they assembled for their Christmas Competition. All but one of the members who took part successfully completed a four fish bag limit with the trout averaging over three pounds in weight. The first hour of the competition saw the trout on a feeding frenzy with most members catching their days allocation within this golden hour. 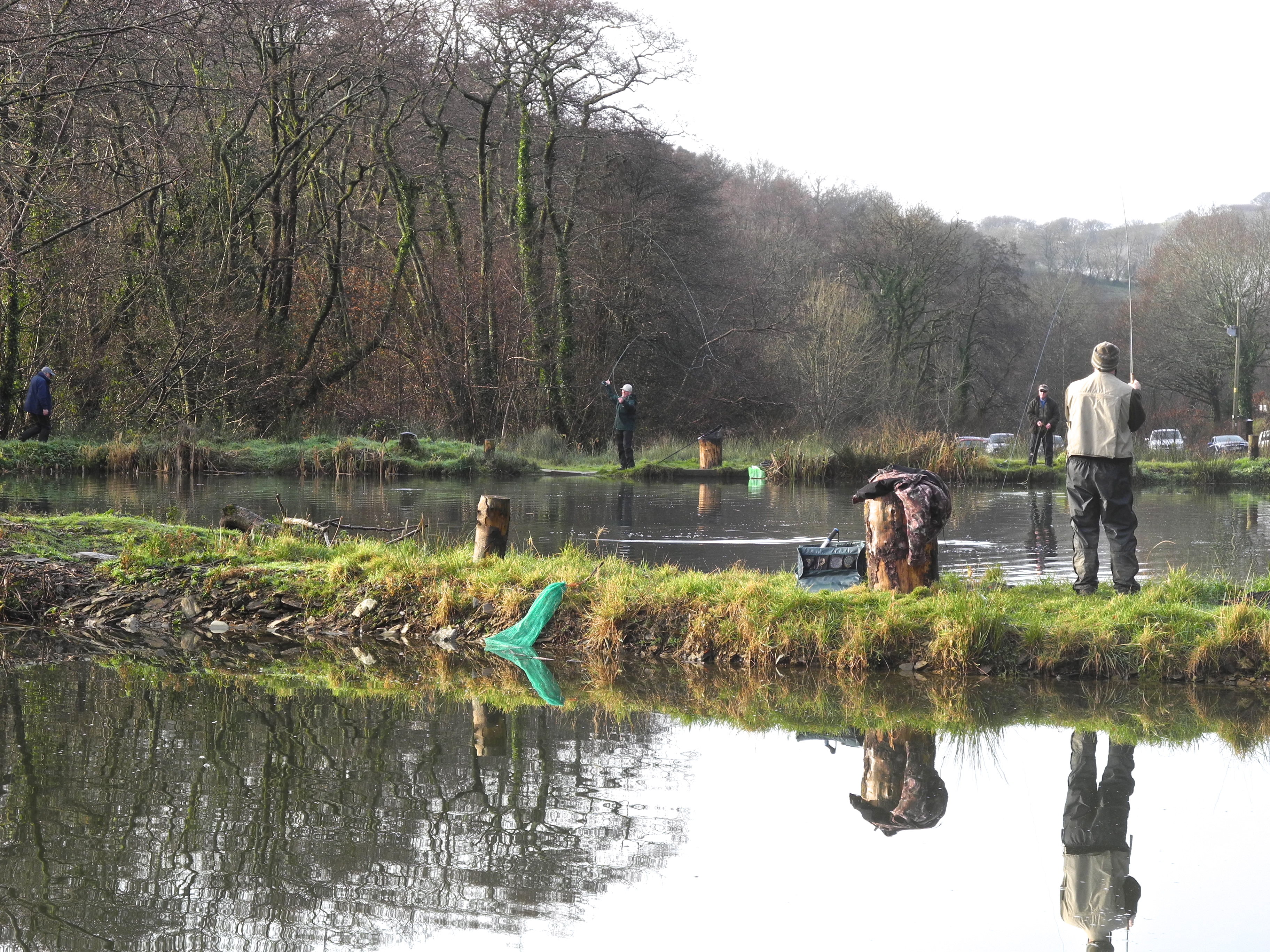 The brown trout within the fishery are stunning looking fish each one carrying a distinctive pattern of dark and crimson spots upon their flanks of gold, bronze and buttermilk. Each fish is so much more distinctive than the rainbow trout and  in my view deserves a far grander title than brown trout. 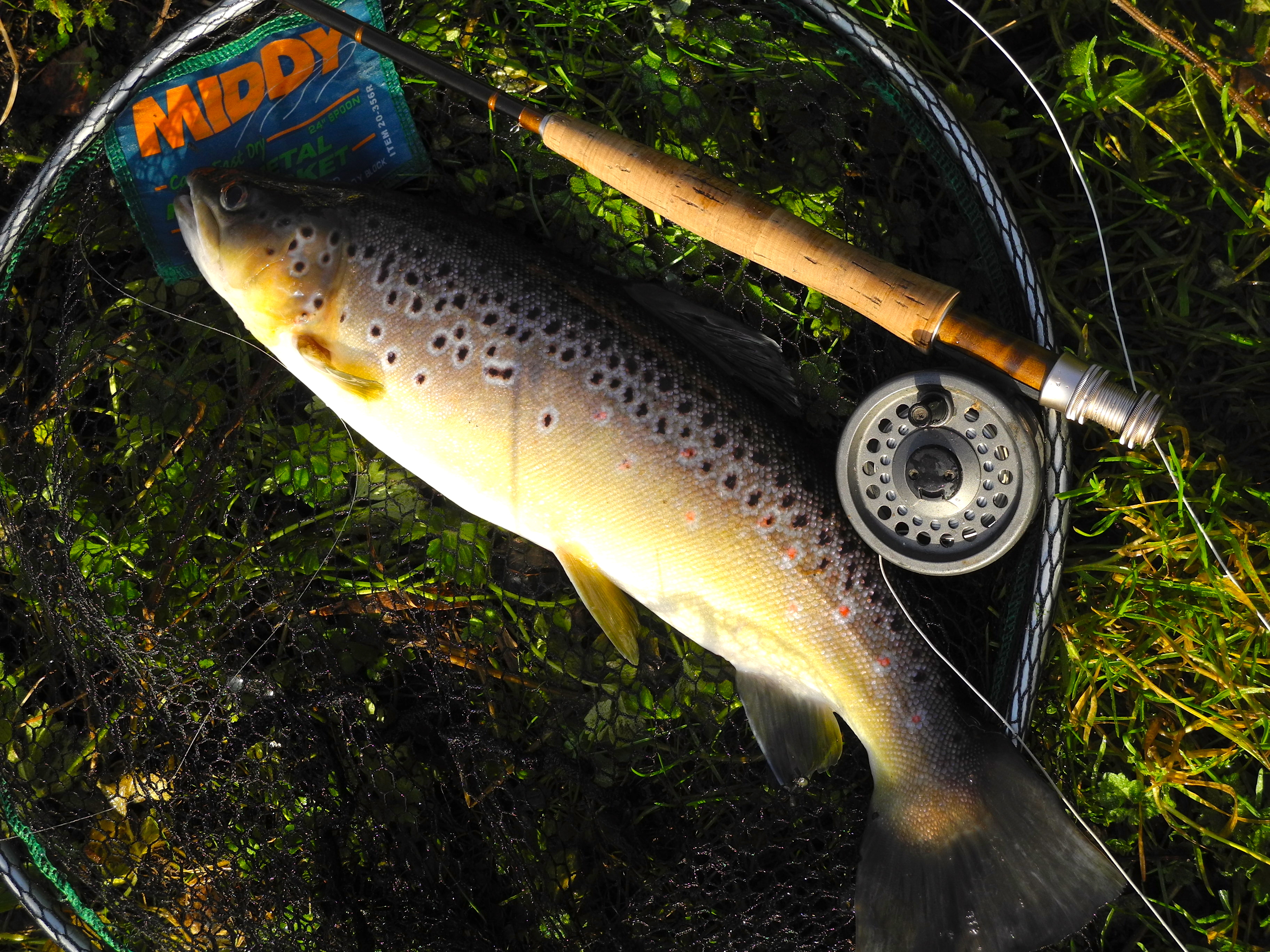 Members used a wide range of patterns to tempt their fish with damsel nymphs and small gold-head nymphs all successful.

Winner of the competition was Roger Bray who caught stunning browns of 5lb 4oz, 5lb, 4lb and 3lb 12oz for a total of 18lb. 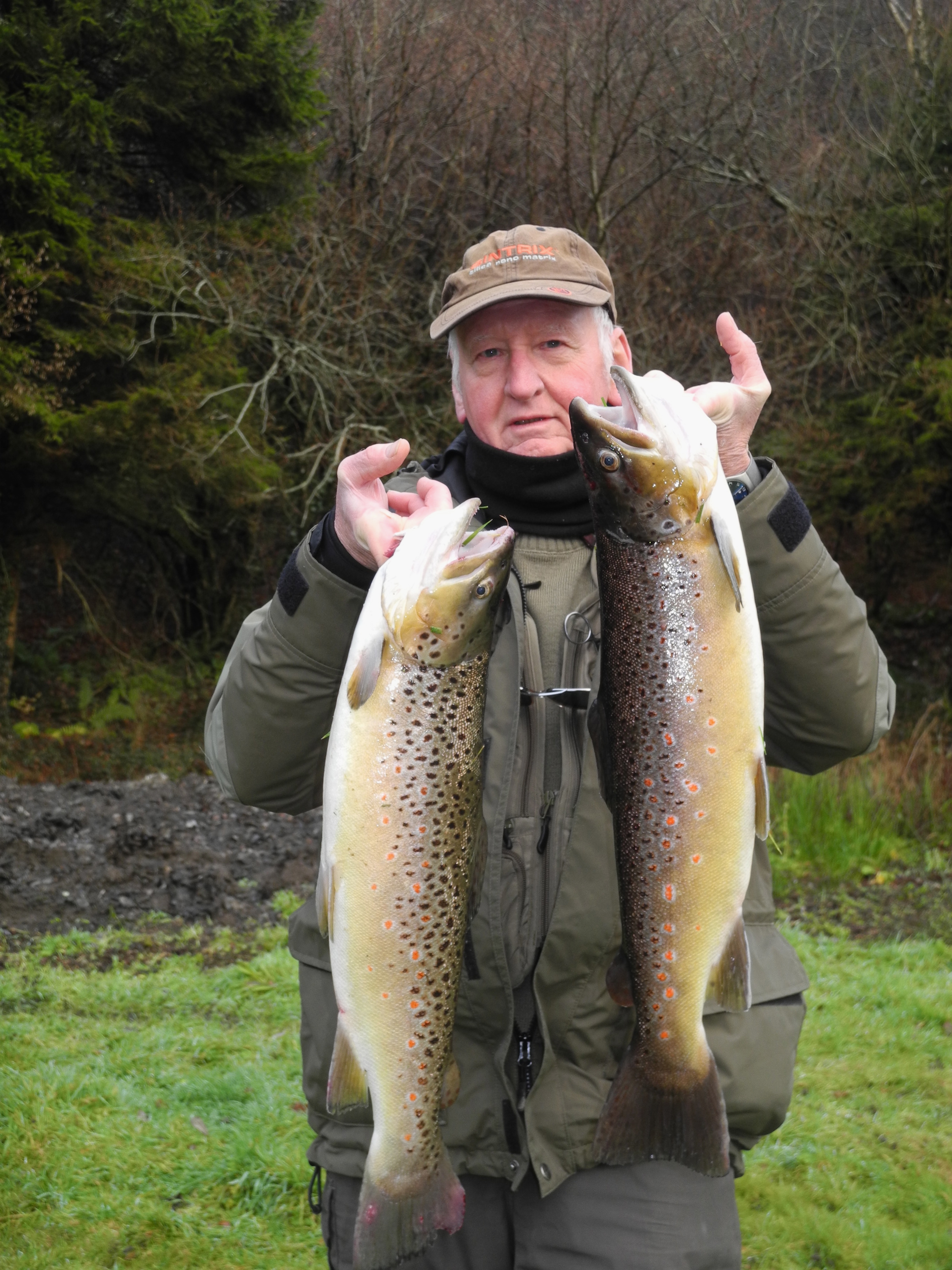 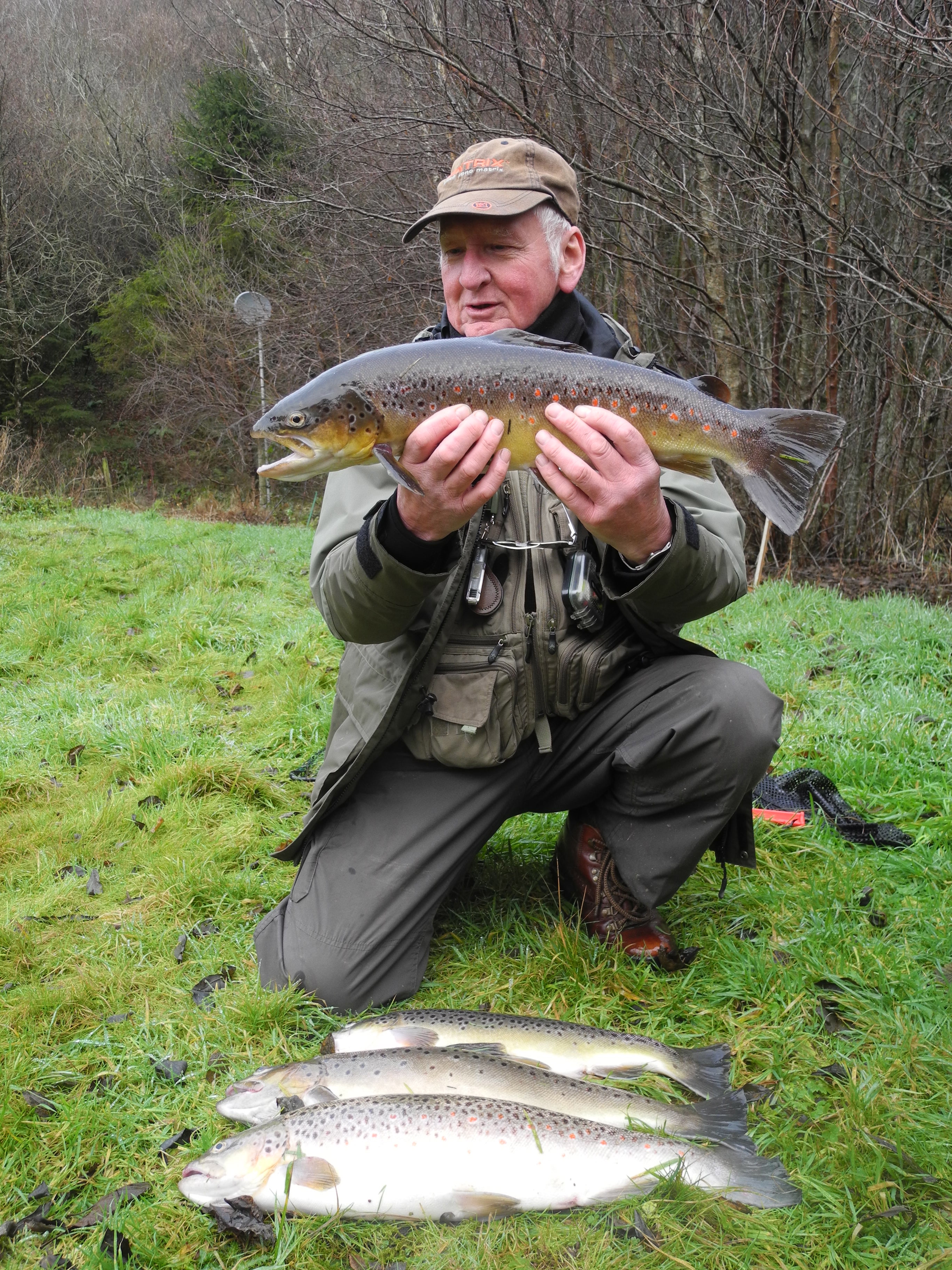 Runner up in the competition was Matt KIngdon with a four fish bag of 14lb 4oz that included the days biggest trout scaling 6lb 4oz. 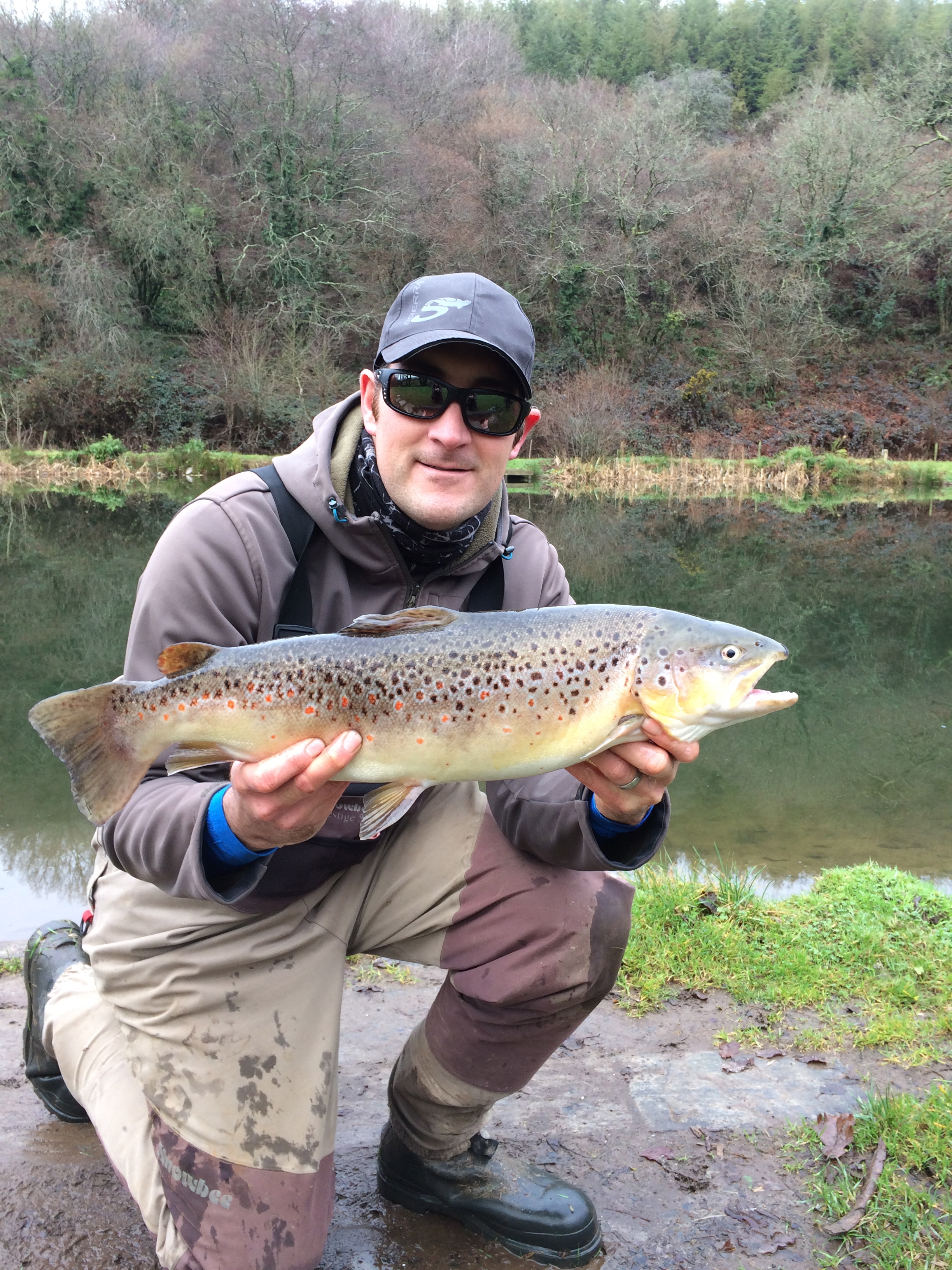 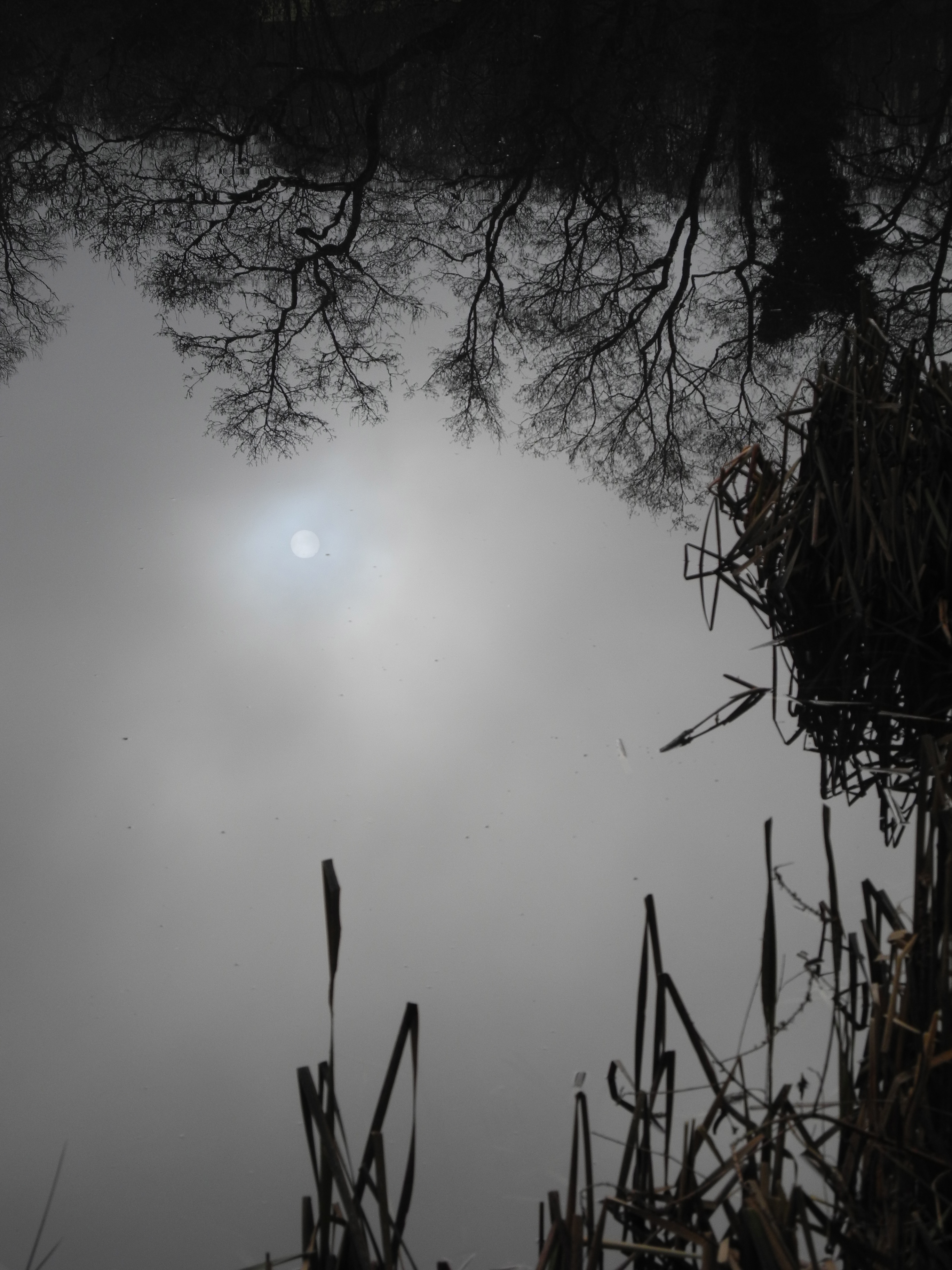 The event was fished in calm conditions with glimpses of winter sunshine. This intimate lake is nestled within a peaceful valley providing an ideal location for a winters day of trout fishing, After catching their bags of trout members retired to the fishing hut to chat of future plans for the coming year as they drained their flasks of hot tea and coffee. 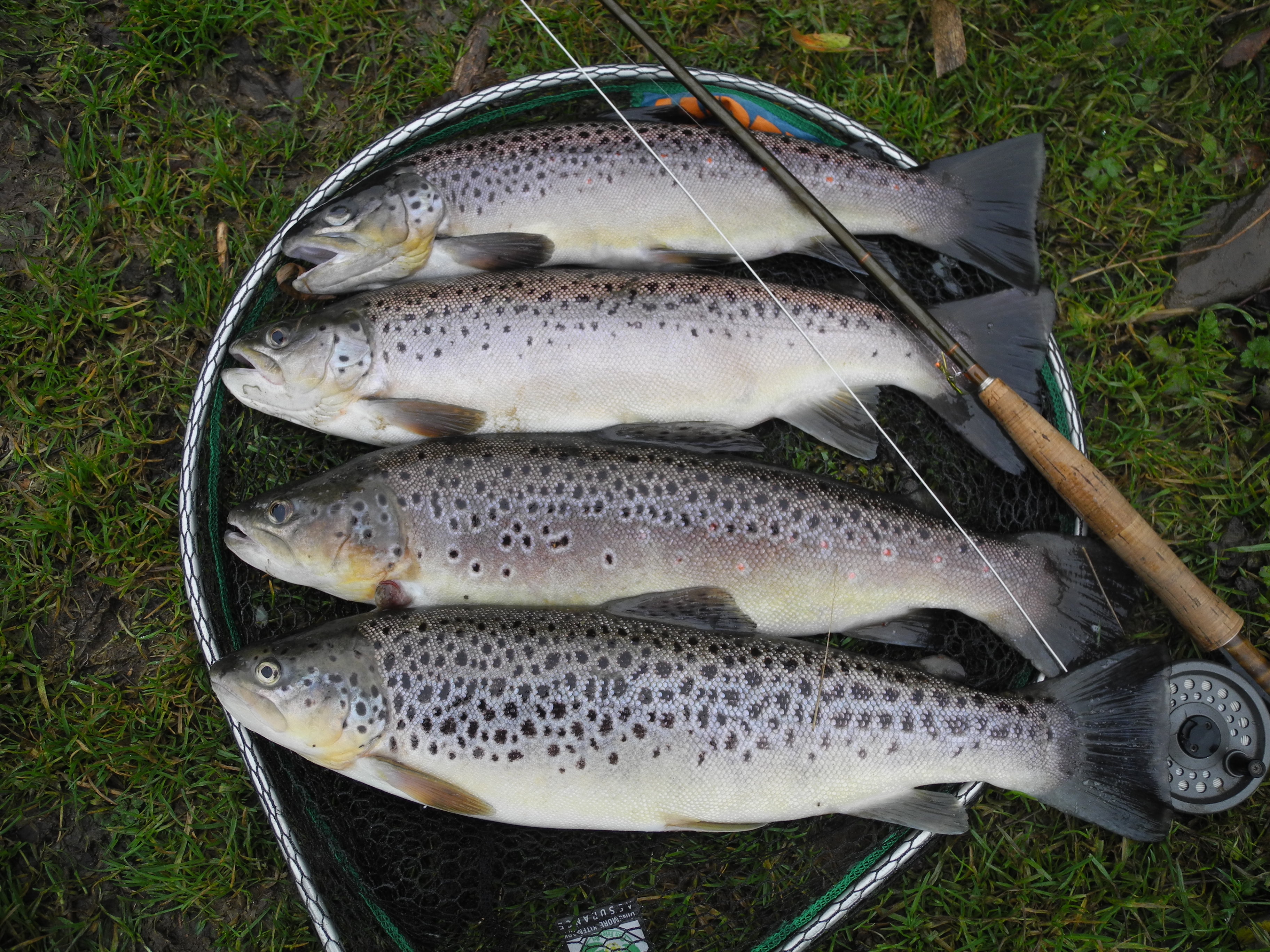 My own twelve pound bag of stunning trout( Above) would delight from any fishery throughout the country. The lake is certainly well worth a visit over the Christmas period if you fancy tangling with some hard fighting trout; an ideal time to test out those fishing related Christmas gifts. 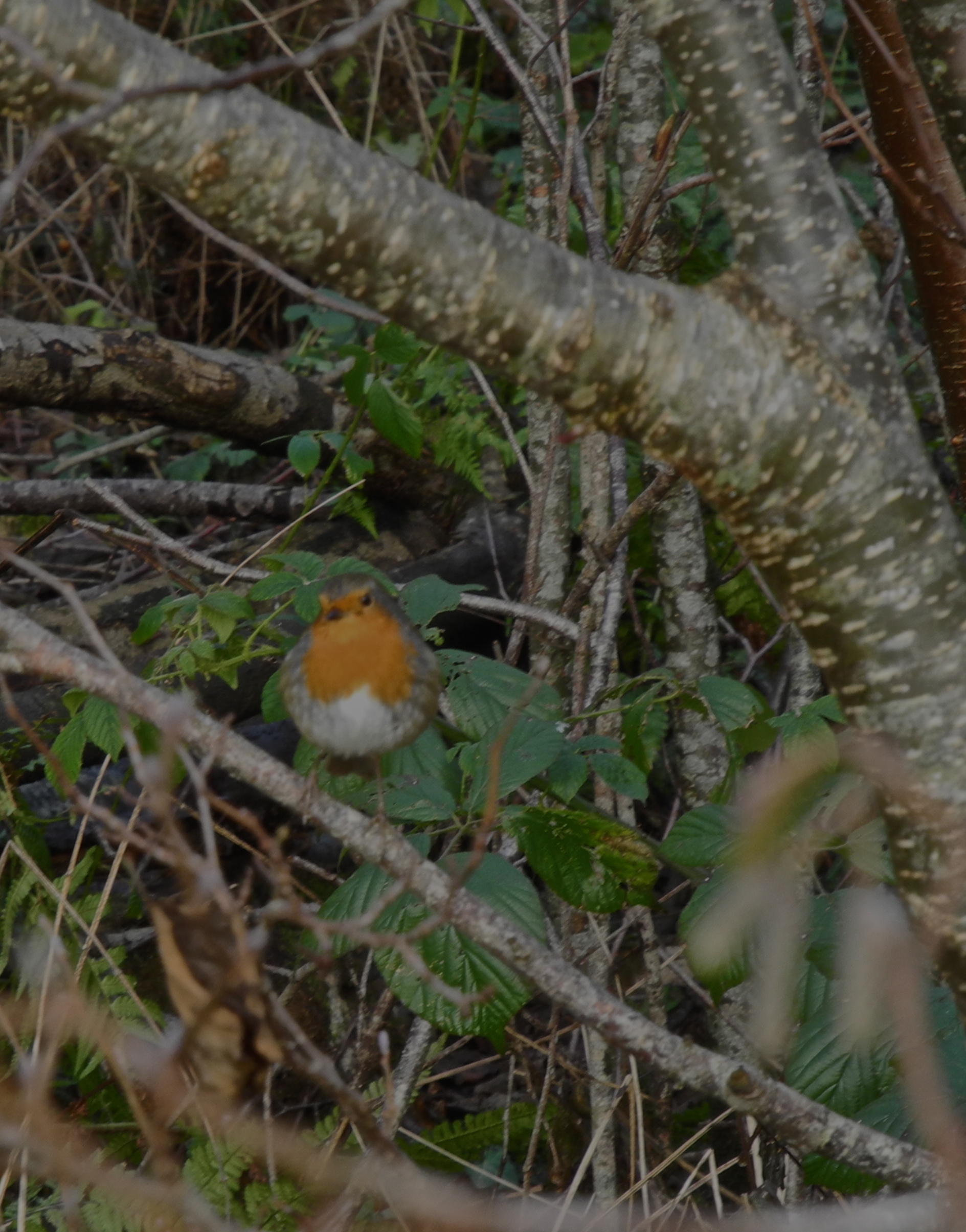 “The fish bite the least, when the wind is in the north better not go forth, when the wind is in the west the fish bite best and the wind from the South blows the bait into the fishes mouth”.  Or something like that. After a few days away from North Devon I have returned and there is not a lot to report on unless you know different. The best chance of a fish would be to fish one of our local still waters for trout. Bratton Water is sheltered from the East wind and has a healthy stock of quality brown trout that respond well to small imitative patterns.

If it’s big fish your after then Blakewell Fishery has been producing some superb double figure rainbow trout in recent weeks and there is every chance of couple of doubles in the fishery’s popular Christmas Competition on December 4th. The event is now fully booked though it might be worth giving the fishery a ring just in case of a cancellation. I will give a full report here.

If you fancy a day out a little further afield then Exe Valley Fishery is a great venue with some hard fighting browns and rainbows present.  It is also well worth considering purchasing a tuition session with Nick Hart; a great Xmas gift.

Join Nick Hart & Pete Tyjas for interactive demos on tackle, casting & fishing techniques plus a chance to see what Grayling fishing is all about.

We will be available throughout the day to provide help & assistance with anything from tuning up a cast to fixing up a leader!

This special event is limited to 10 people, includes a 2 fish permit and unlimited catch & release. We might break out the fly tying vice and there will be cake! 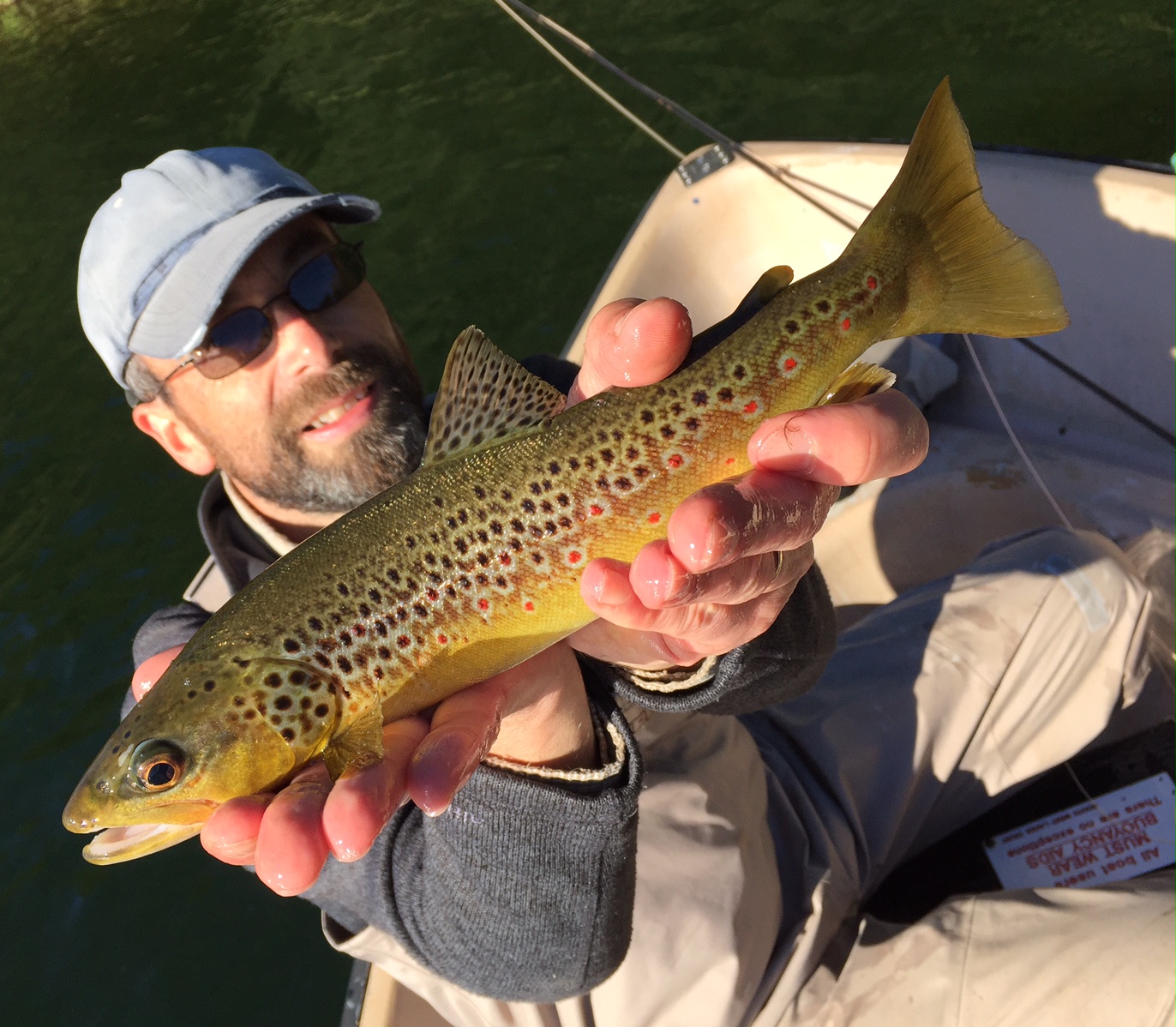 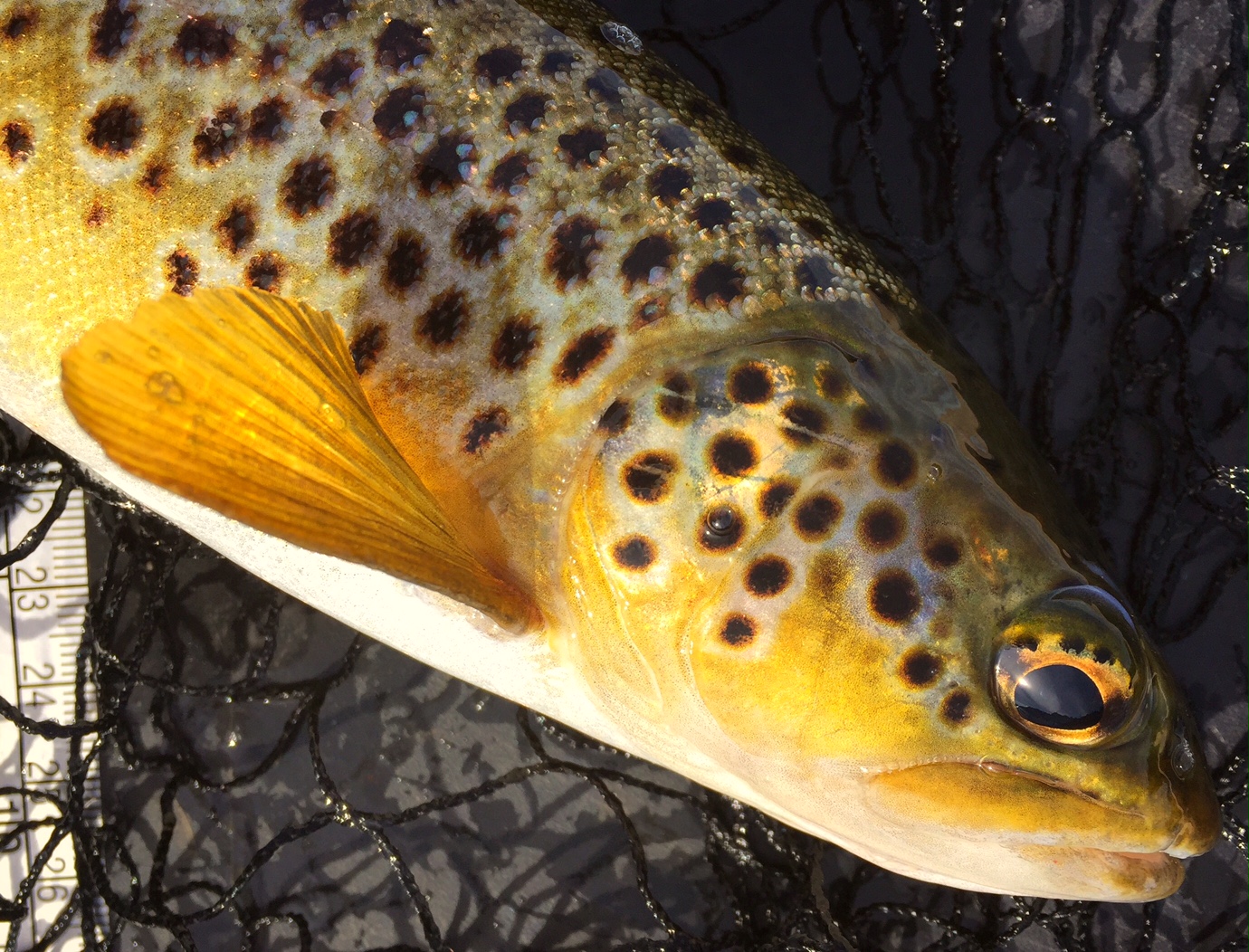 Jon Ogbourne and Peter Coleman Smith enjoyed a cracking day in the Wistlandpound Clubs Boat . Taking fish from from all shores of the lake. Side opposite boat slipway particularly product fished tight in under the trees. The shallow bank to the left of the stream also provided some fruitful drifts including a first ever treble hook up! All fish coming to traditional loch style tactics with a size 12 claret bumble by far the most successful fly on the middle or top dropper, followed by a gold head black and peacock spider on the point. Nice ripple all day with helpful wind and broken sunshine. Ended up with 32 brown trout to the boat + 1 Rudd. Biggest 14″. A very special fishery declared the pair of anglers. 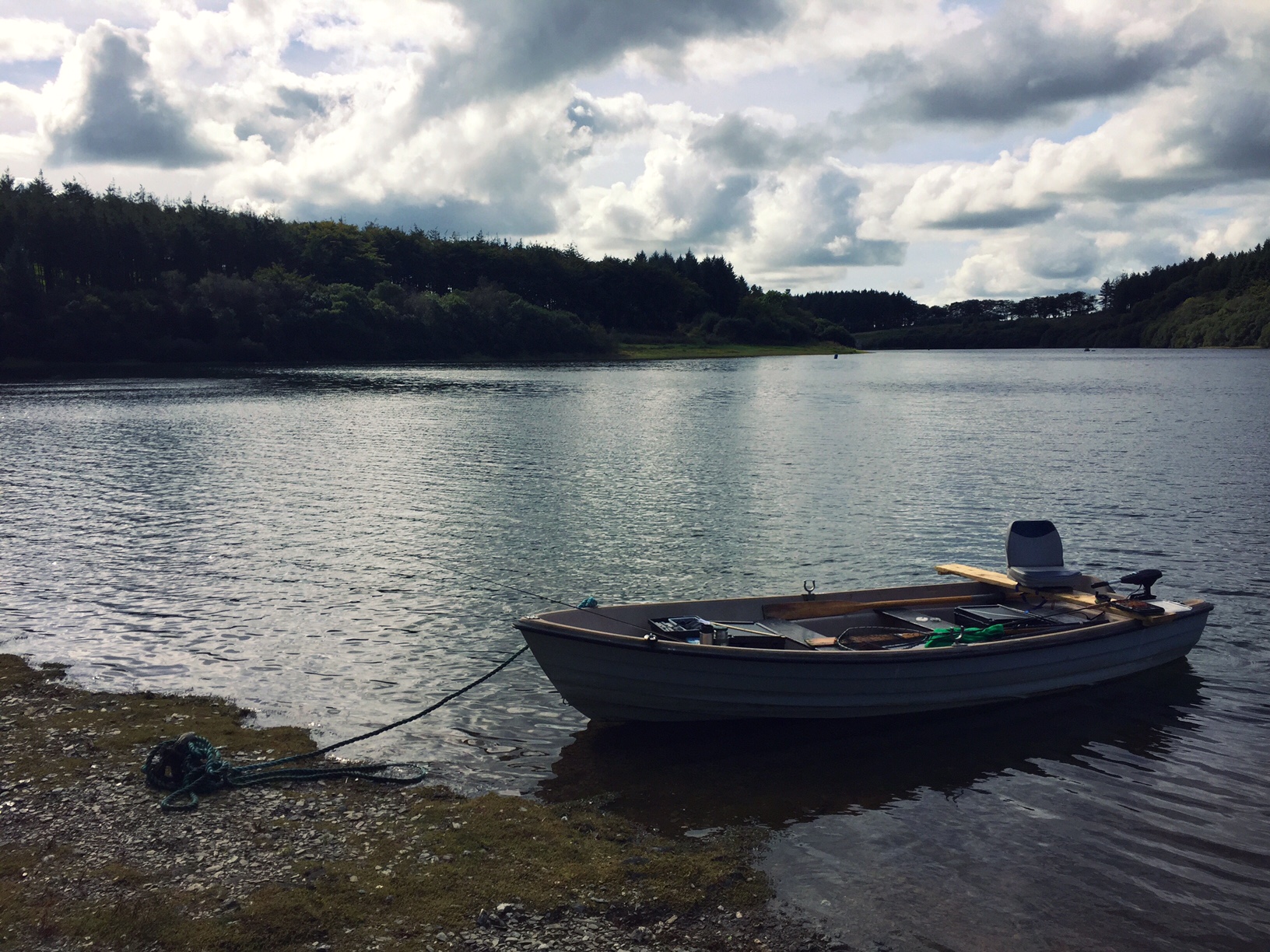 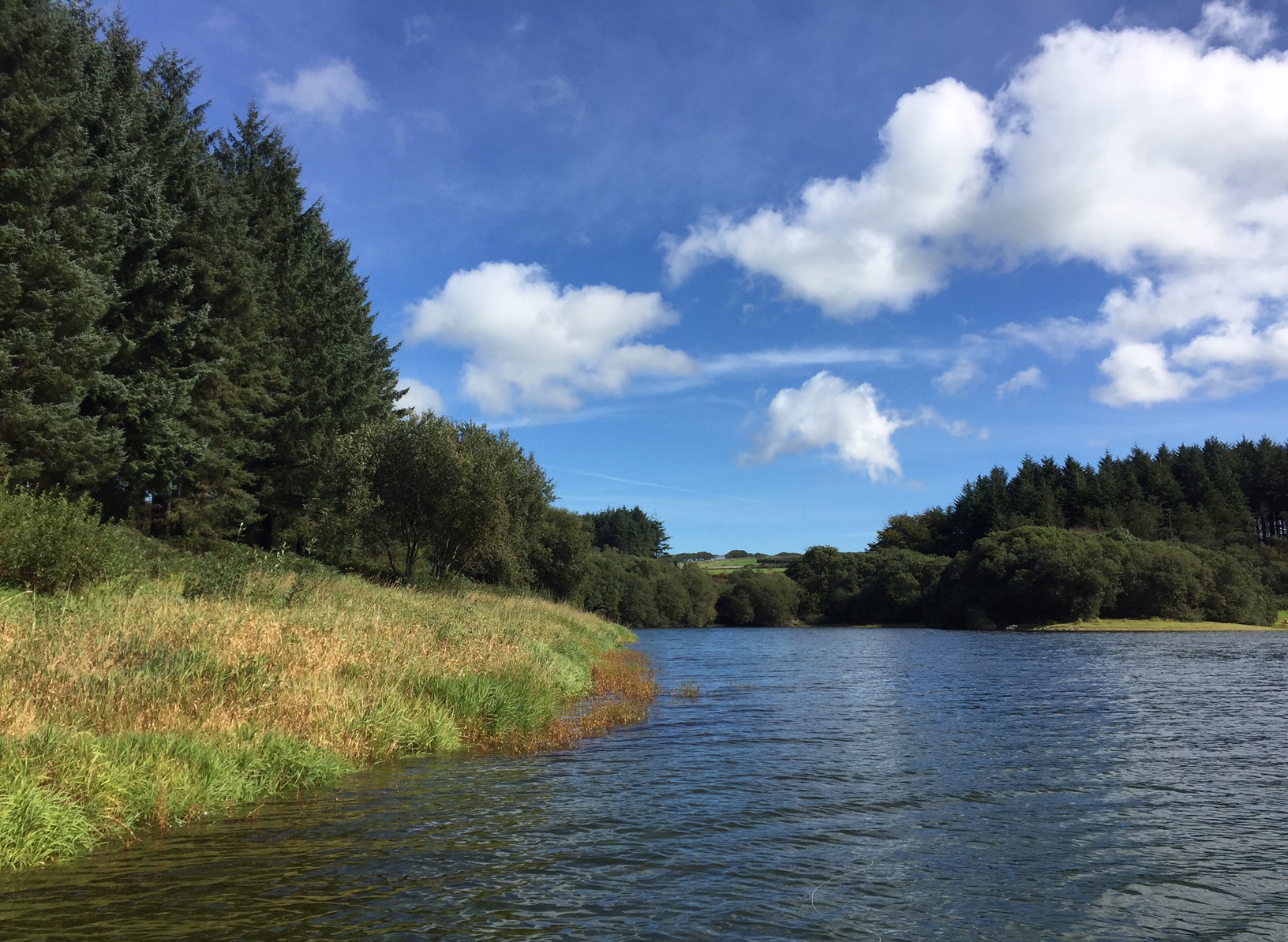 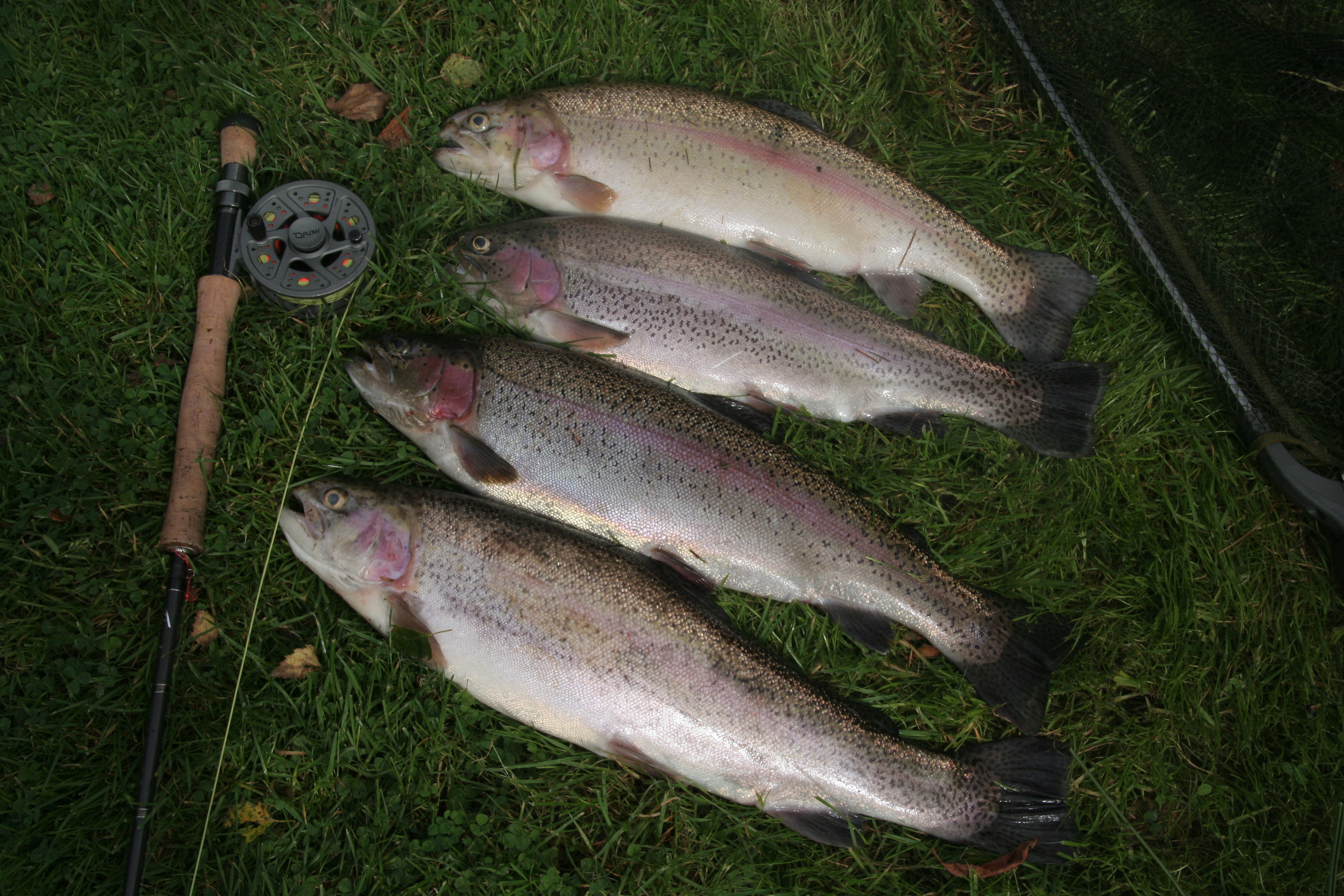 I called into Blakewell Fishery on the way home from Barnstaple just in time to meet Roger Ackriod weighing in a four fish bag of quality trout to 4lb 2oz tempted on blood-worm imitation. 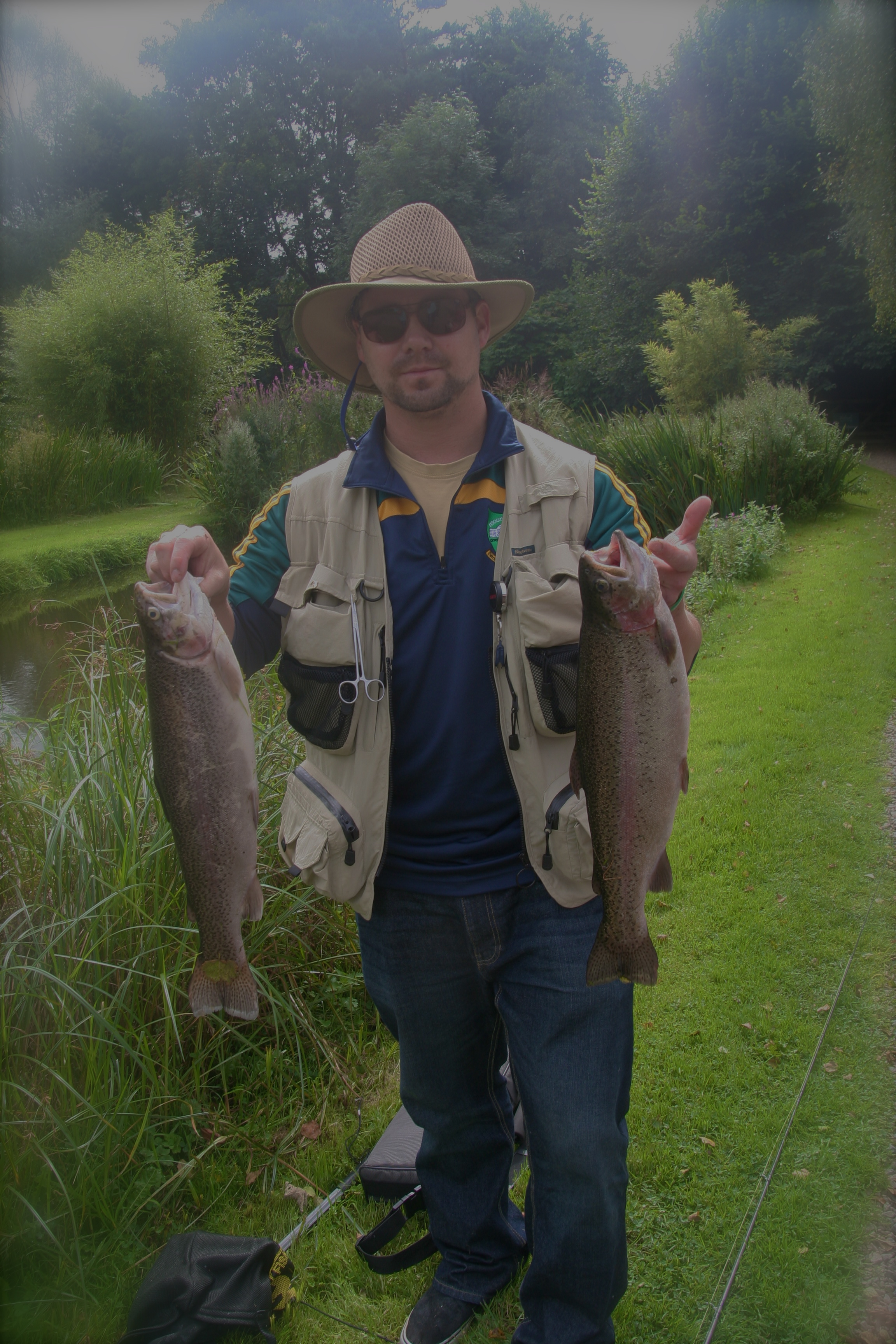 The fishery re-opened today September 10th after extensive weed clearing work on the lake that has certainly paid dividends with the water now crystal clear and the bank-side vegetation  still lush and green. After a cup of tea and coffee Pauline and I took a walk around the lake to capture a few images on re-opening day. The early autumn sunshine shone into the clear water giving glimpses of several fine trout that I feel sure would have seized a well presented nymph. John Nickel informed me that several double figure rainbow trout have been stocked along with some pristine brown trout. The next few weeks will see some fine trout landed by visitors to this fine still-water with small imitative patterns most likely to succeed. 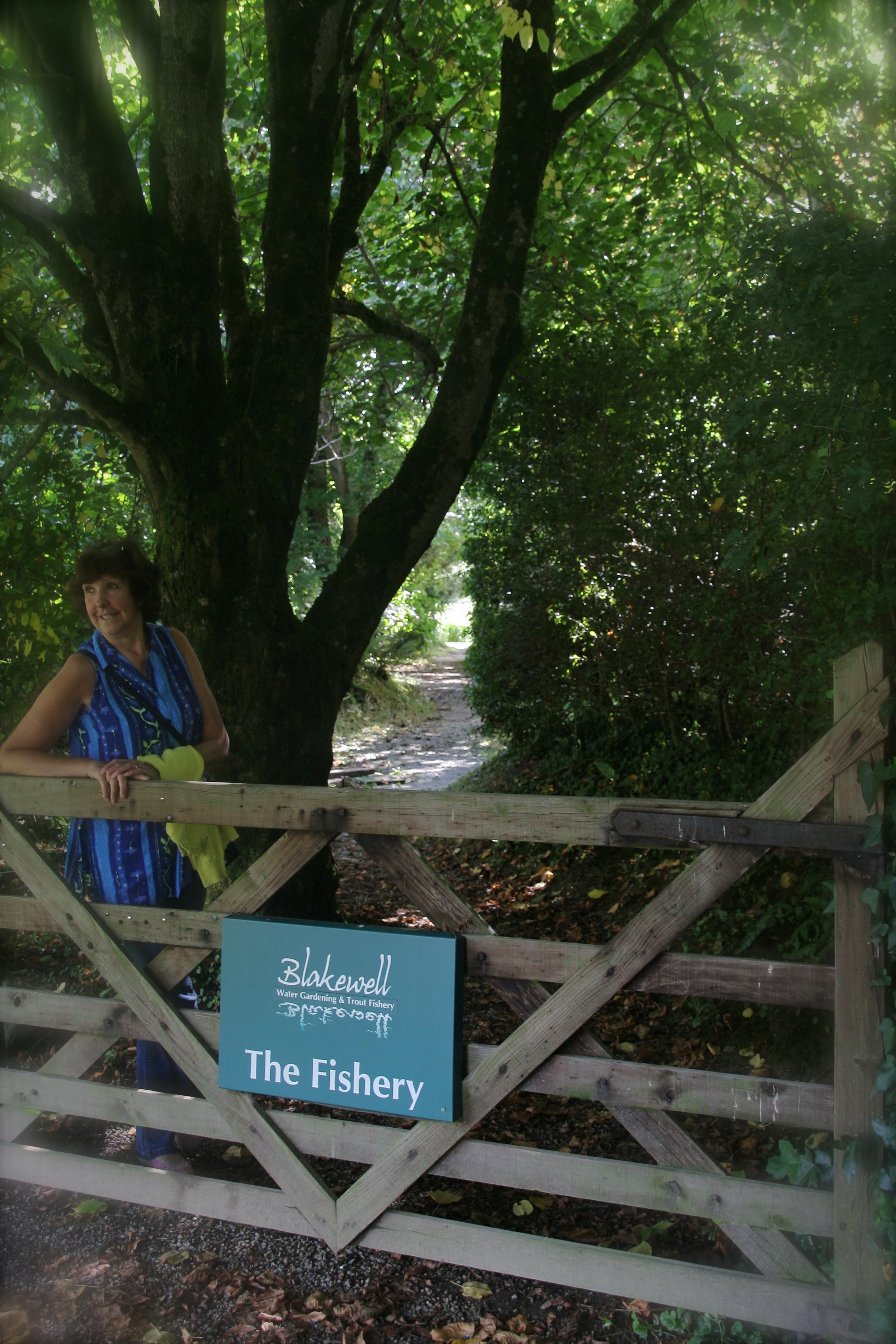 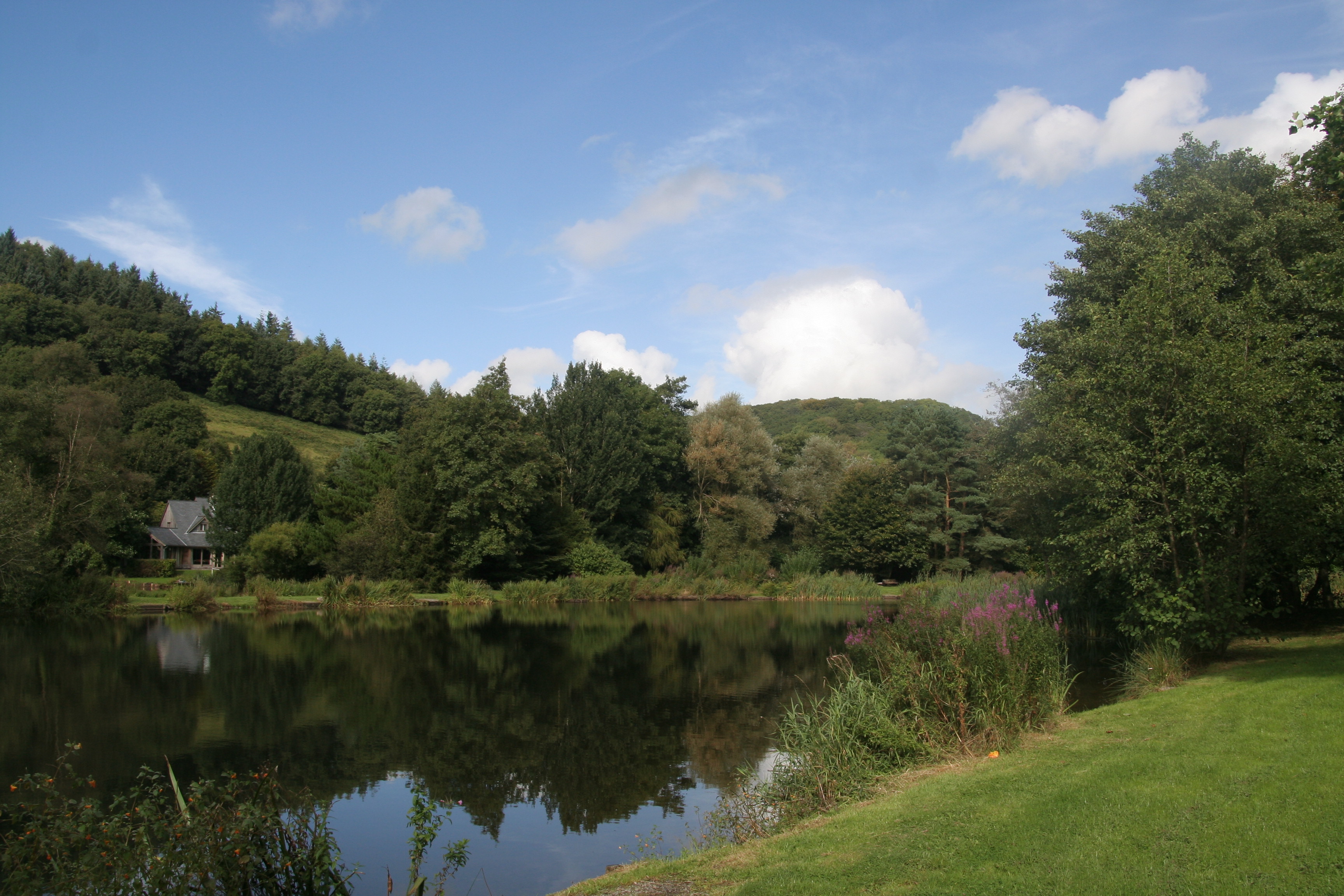 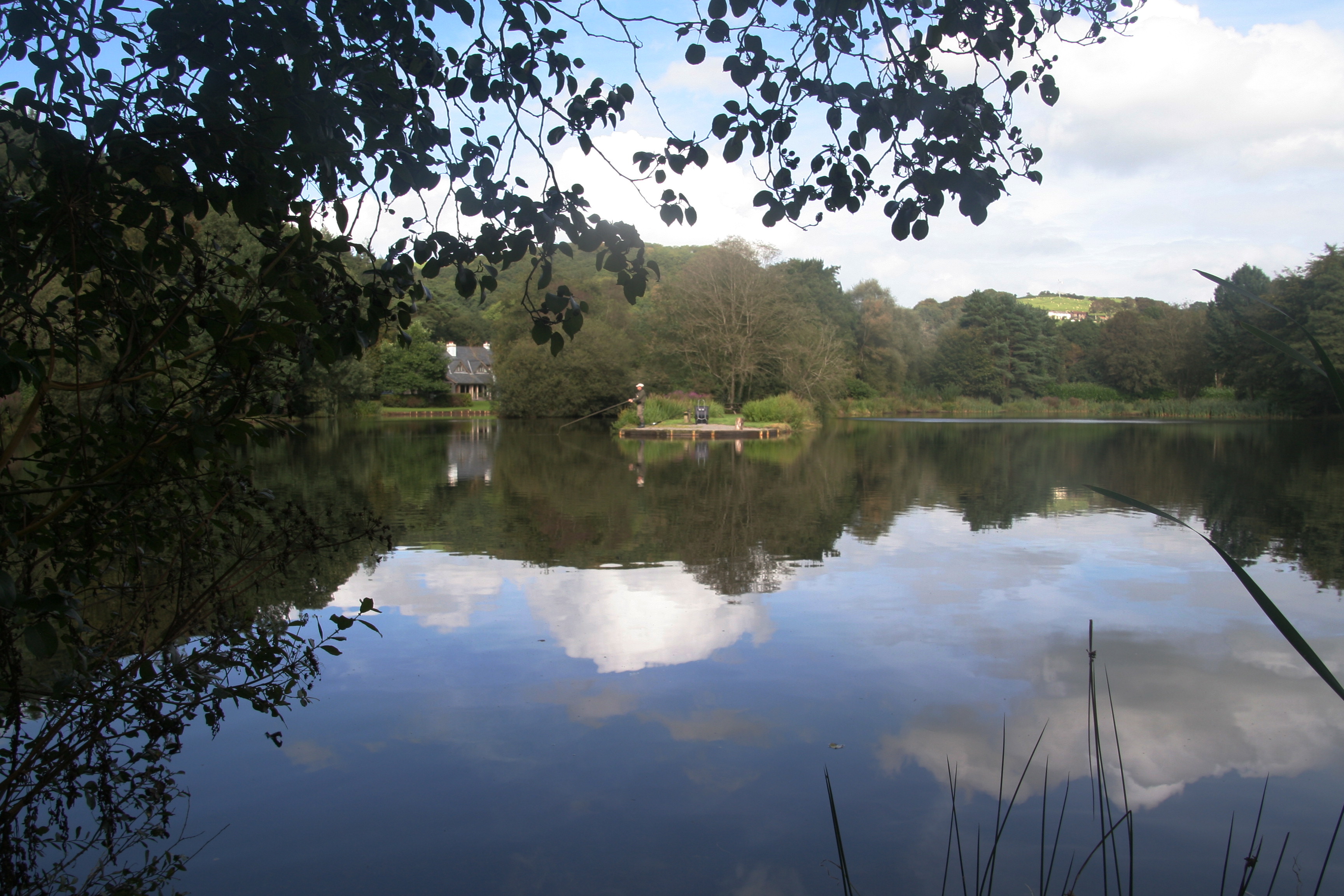 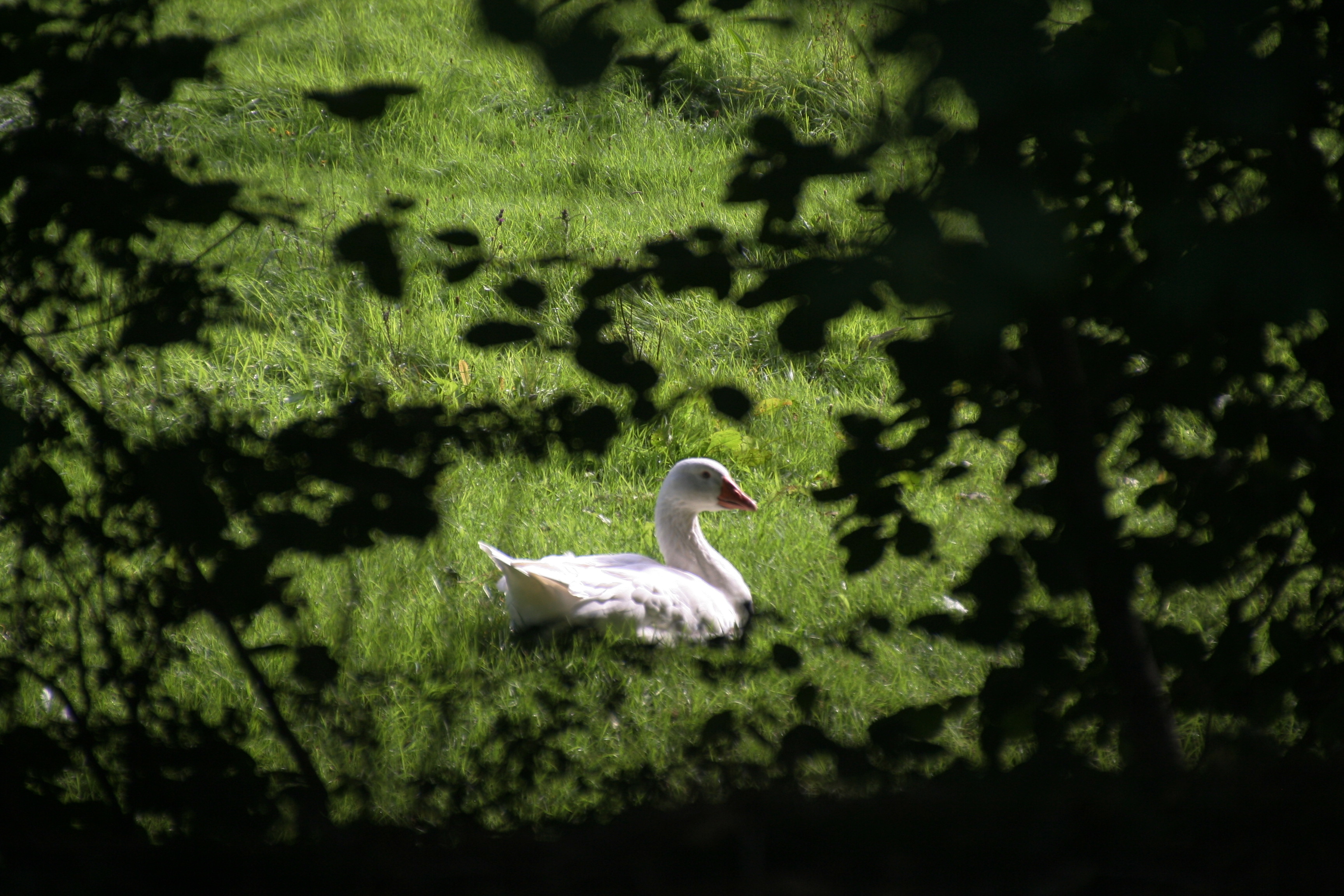 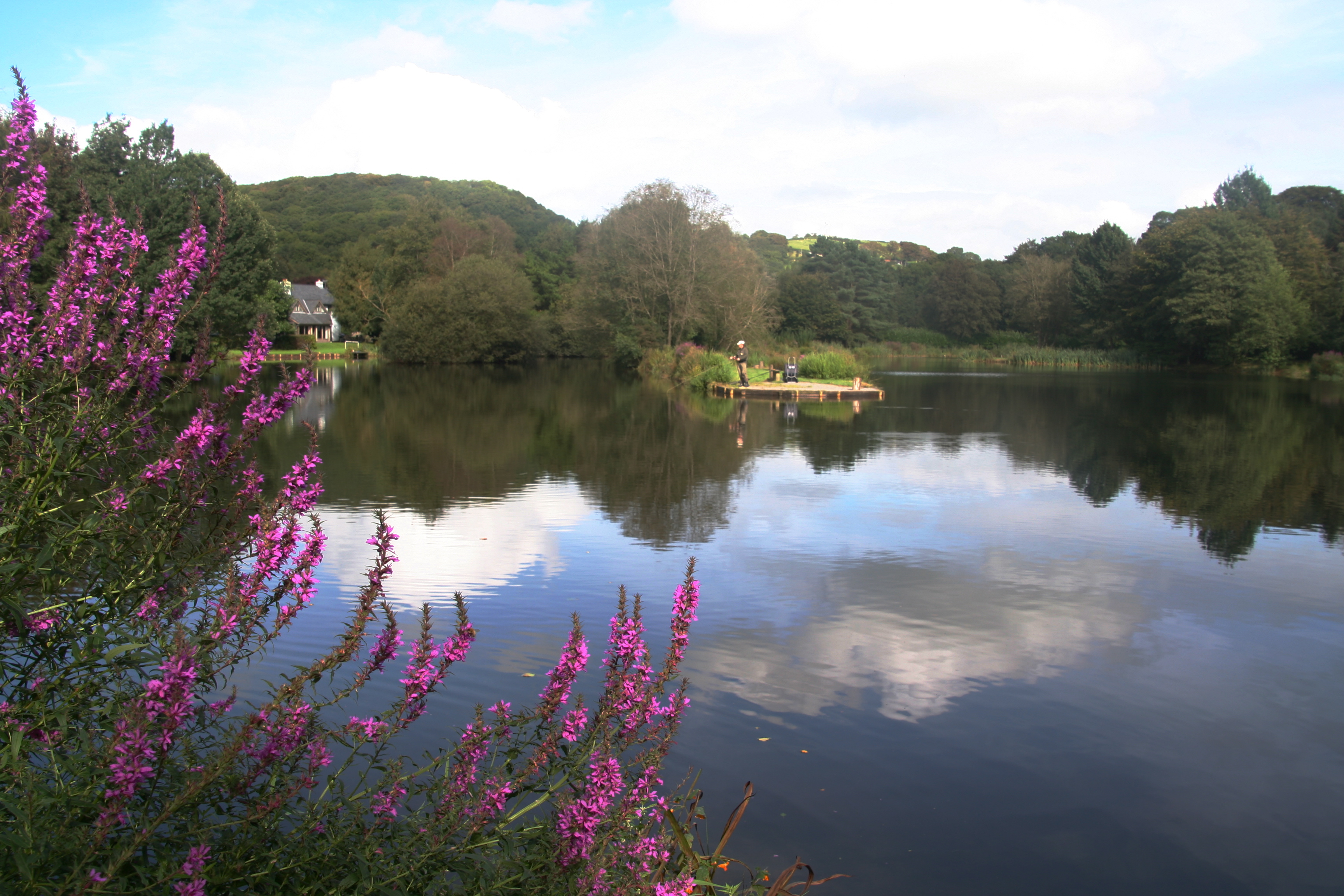 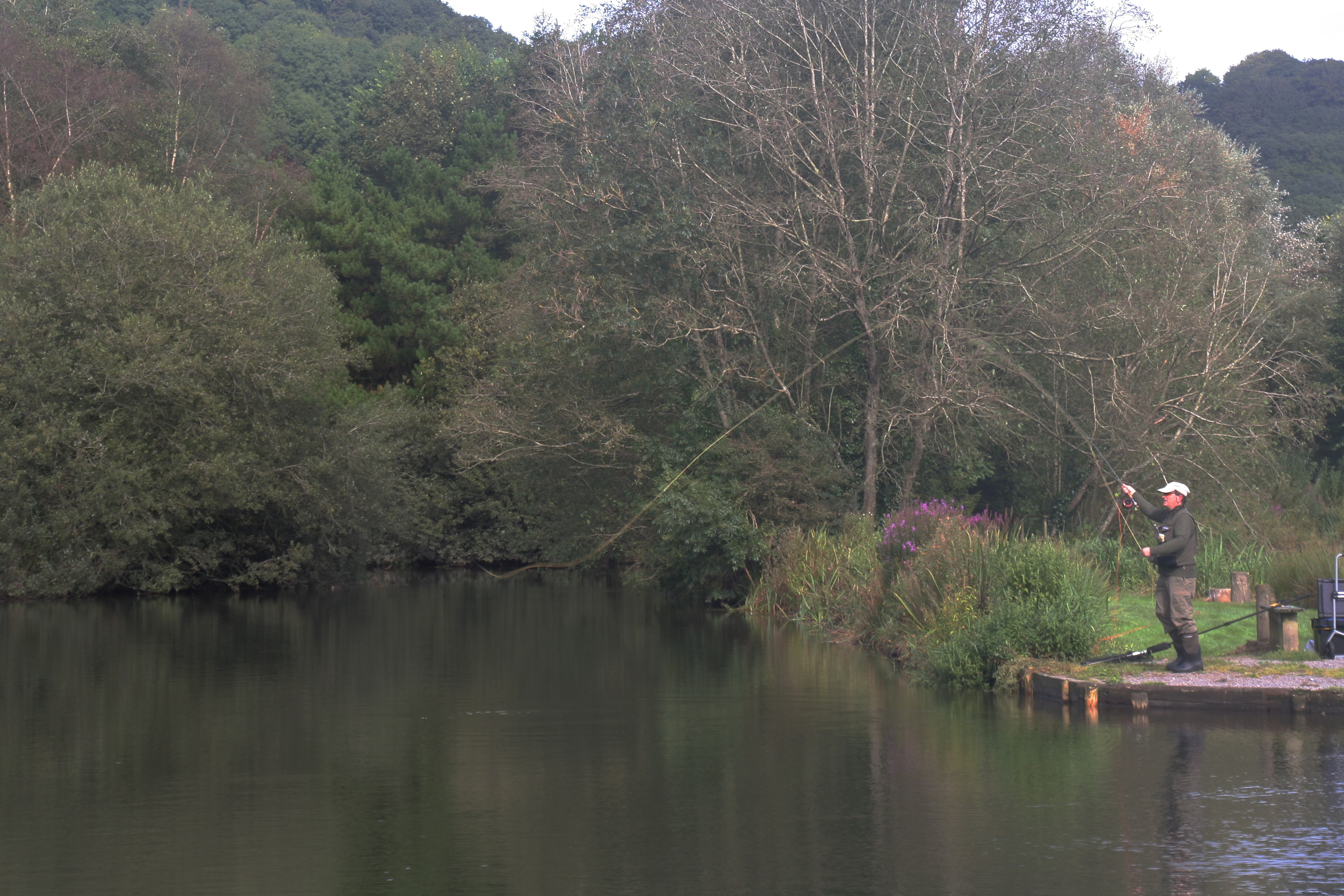 August is often a poor month for trout fishing with high water temperatures making the trout reluctant to feed. Excessive weed growth also impacts on many of the regions smaller still-water’s resulting in temporary closure. Blakewell Fishery is presently closed for maintenance and is due to reopen in early September as is Exe Valley near Dulverton. I will post here when both of these excellent fisheries reopen and may well pay a visit to them both myself. It is unfortunate that these conditions coincide with the busy time for tourism as fishery’s stand to lose income as a result of closure. Perhaps it would make sense to have a short close season each summer to allow for weed clearance with the fisheries reopening in early September as temperatures drop and the trout resume their feeding in earnest. Trout anglers would return to the lakes full of enthusiasm after the short break. Keen Fly Fishers can always find sport in the estuary along the coastline targetting bass and grey mullet. On the rivers they can target salmon and sea trout when conditions allow. There are also many miles of river to explore with a light weight fly rod, wild brown trout are beautiful fish that give great sport in beautiful surroundings.

The warm, dry weather continued throughout most of the month with a few very hot sunny days. Water levels are dropping and water temperatures rising (to over 20 ºc), resulting in many of the fish moving out to sheltered, cooler deeper water.

Wimbleball – Boat fishing over the open, deeper, cooler water, particularly nearer the dam, has proved to be the most productive, particularly on the drift, while bank anglers have struggled to locate feeding fish. Weekly rod averages varied between 1 and 2.5 fish per rod. Evenings have been the best time to fish on or near the surface when dry Daddies, Claret

Boobies on sinking lines have caught the deeper fish. The best fish of the month was a 4lb 3oz Rainbow caught by Mr Ormston, while Paul Grisley caught a full bag of fish up to 3lb. Water level is 67% full.

Roadford – Roadford exploded into life at the end of July and has fished brilliantly all month. Regulars Duncan Kier and Andy Birkett have both had red letter days fishing by boat over the ‘boils’ (aeration pipes near the tower). Duncan managed 56 Brownies in one day up to 3lb 4oz with Andy catching 30 fish the following day up to 3lb. Duncan has returned to take 9 fish followed by a further 32 fish in separate sessions. Successful flies have been a Squinky, Muddler and Leach on the drift over the boils. Boats and engines are available on 01409 211507. 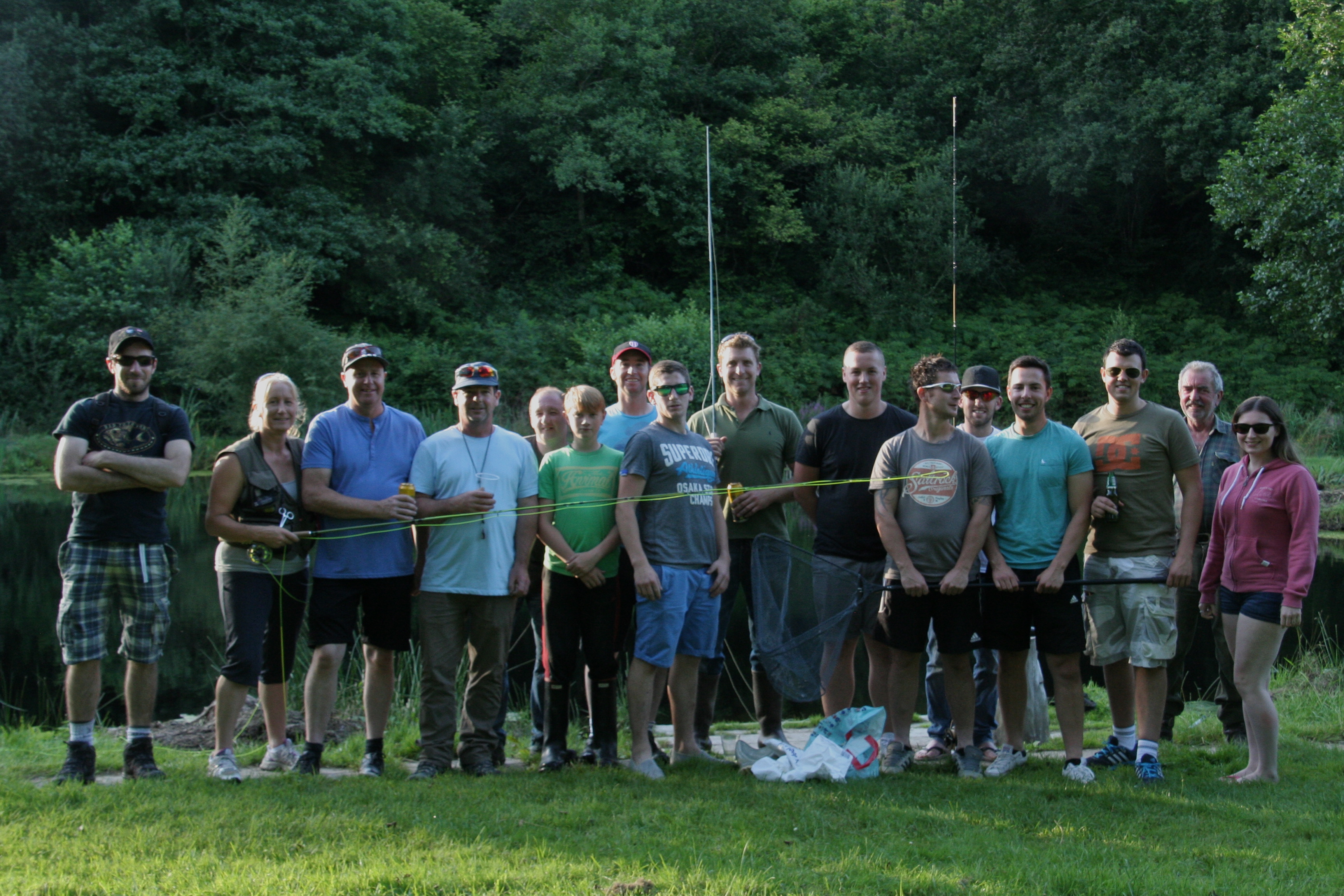 Close to twenty members of Bratton Fleming Cricket club descended upon the normally tranquil waters of Bratton Water Trout Fishery for what will undoubtedly become an annual event. A mixture of experienced fly Fishers and first timers enjoyed the event that was blessed with warm summer sunshine. In the clear water small imitative patterns proved most successful with a gold headed pheasant tail nymph responsible for the demise of several of Bratton Waters hard fighting residents. 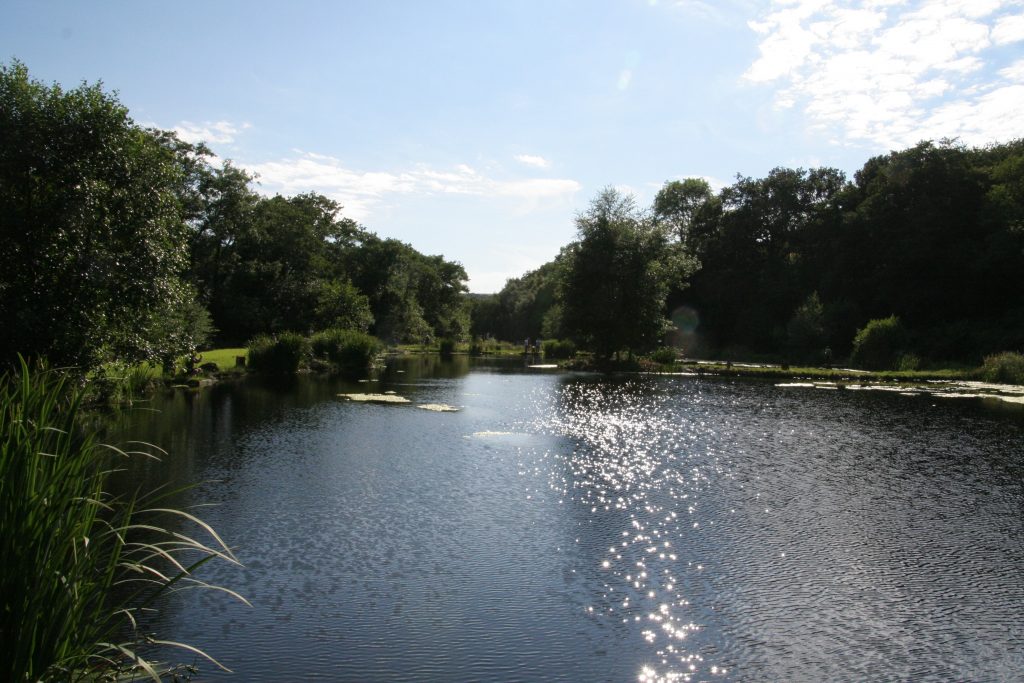 On arrival at the fishery I found experienced local trout fisherman and Bratton Water regular Glyn Rees who had enjoyed a good day at the water landing four brown trout to 4lb targetting the fish using dry fly tactics.

Whilst the fishing fraternity cast their offerings to the lakes trout the remaining members of the Cricket club prepared the BBQ and played a primitive form of cricket using bats made from old sticks. Others watched the anglers and helped with the netting of fish. 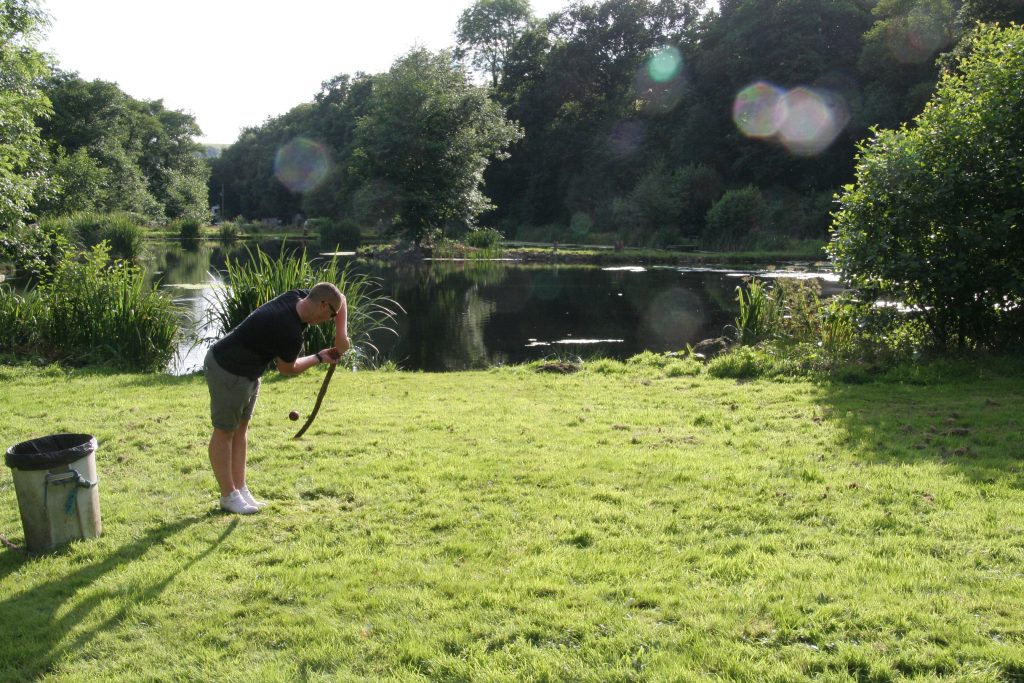 Most anglers landed their brace of trout despite the warm sunshine that beamed into the water. A pair of Polaroids were a distinct advantage enabling individual fish to be targetted with the two trout I caught both actually seen to take the tiny fly. The fish were a mixture of brown and rainbows with Debbie Tucker landing the biggest brown trout at 3lb 1oz. James Thomas landed a hard fighting of rainbow of 3lb 8oz that was leading the biggest fish of the day when we left the event to join another local event. Rob Scoines fresh back from a trip to Norway chasing big fish adapted to the finesse of trout fishing landing a brace of rainbows each weighing 2lb 9oz.

The Cricket club give special thanks to fishery owner Mike Williams for hosting the event that raised valuable funds for the Cricket Club.